The fossil was unearthed years ago in the Green River Formation in the United States, but the study’s co-author only happened upon it at a museum while on vacation in Japan. 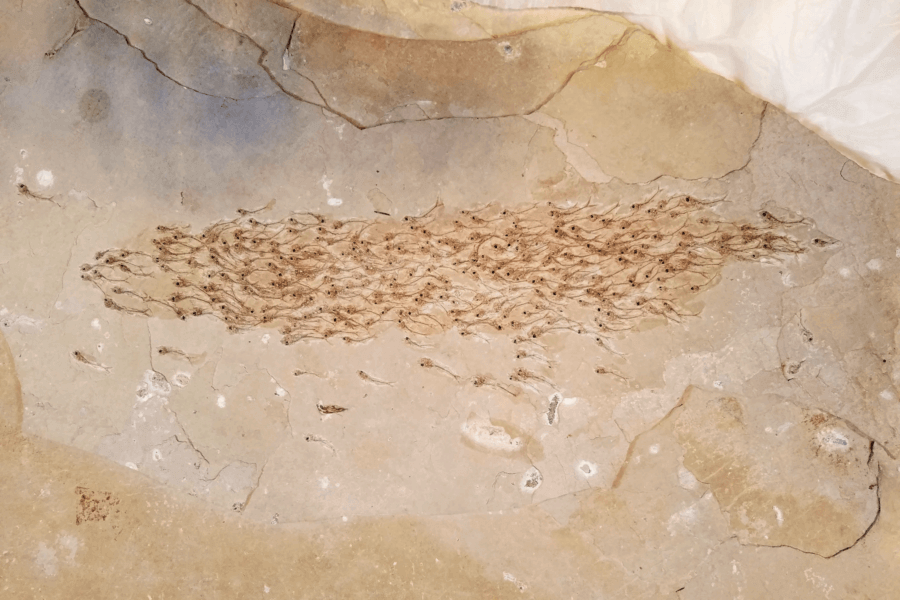 Mizumoto et al.The 50-million-year-old fossil from the Green River Formation in the U.S. contains the remains of 259 fish.

While fossils provide us clues of the basic anatomy and biology of extinct animals, rarely are they able to hint at how these ancient creatures socialized or behaved. This is simply due to the fact that freezing multiple creatures in the same moment in time would require a lot of natural phenomena to happen at just the right moment.

But a stunning and extremely rare 50-million-year-old fossil of hundreds of extinct fish seems to give exciting new clues of ancient marine animal behavior.

A new study published in the journal Proceedings of the Royal Society B has examined what the study’s researchers believe to be a fossilized school of an extinct fish species called Erismatopterus levatus. The very well-preserved fossil features an imprint of 259 fish — all of which are under an inch long and almost all facing the same way — in a slab of limestone rock.

“It looks like an actual fish shoal,” Dr. Nobuaki Mizumoto, who studies animal behavior at Arizona State University and co-authored the study, told the New York Times. Mizumoto came across the fossil in 2016 while he was on vacation with his wife visiting the Fukui Prefectural Dinosaur Museum in Katsuyama, a small city in Japan.

Mizumoto and his team believe the fossil shows a school of fish in action, revealing that fish developed this distinct behavior much earlier than previously thought.

The fossil is about 22 inches wide and 15 inches tall, and originally came from the Green River Formation. The formation spans the U.S. states of Wyoming, Colorado, and Utah. 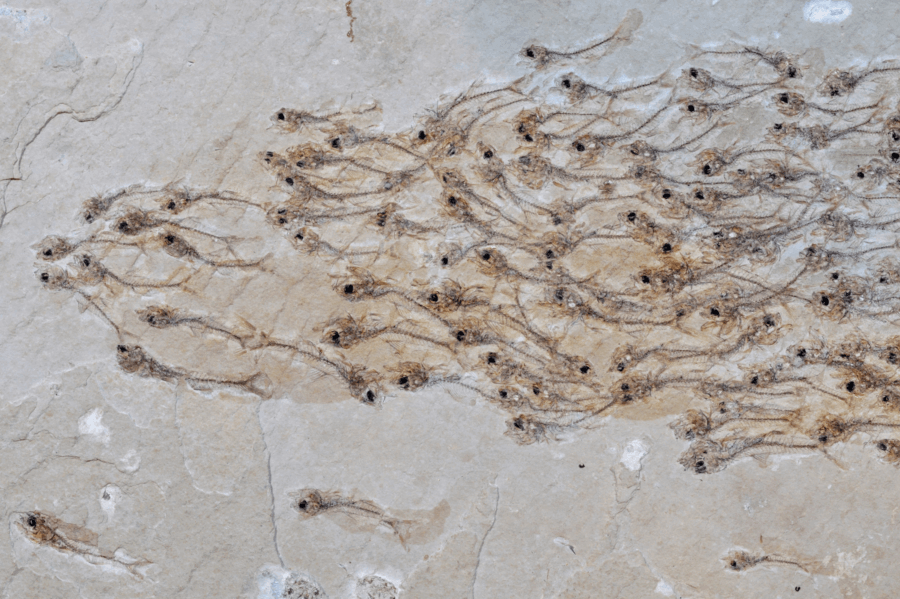 Mizumoto et al.The fossil of the extinct fish species Erismatopterus levatus, which Dr. Nobuaki Mizumoto spotted at a museum while on vacation in Japan.

To test their theory that the fossil captured a school of live fish seconds before they were buried together — rather than dead fish that accidentally collected together in the rock — the team measured each fish, mapped out its position, and ran 1,000 different simulations of the school’s possible movements.

The anticipated trajectories of the fish that were simulated using a projection model suggest that the fossilized fish were likely a school that was sticking together. There were only eight fish in the entire school whose heads weren’t pointed in the same direction as the rest.

Moreover, the study states that the team found “traces of two rules for social interaction similar to those used by extant fishes,” which involves attraction (when fish move closer to their neighbors) and repulsion (when they distance themselves from their neighbors).

Fish form schools, or shoals, as a way to gain extra protection from predators, and possibly as a way to save energy by reducing friction. Without a sole leader, fish are able to swim in perfect synchronization.

Despite the exciting implications of the study, some scientists are skeptical of the finding.

“I can’t picture a three-dimensional school of fish sinking to the bottom and maintaining all their relative positions….That makes no sense to me,” argued paleontologist Roy Plotnick, who was not involved in the study. The study authors acknowledged the possibility that the fish could have been buried after dying and gathering together.

Although researchers cannot confirm exactly how the fish died, they hypothesize that a suddenly collapsed sand dune could have buried the school in mere seconds, maybe knocking a few out of their original positions in the group in the process.

The explanation behind the unique fossil has been left a mystery but whatever the case may be, one thing is clear: that fossilized group of fish still looks pretty cool.

After you’ve read about the unique fossilized school of fish, learn about the largest blue whale fossil ever found. Then, check out eight of the world’s most incredible rock formations.