He was attempting to raise awareness for a future parachuting feat – but he ended up getting more publicity than he bargained for. 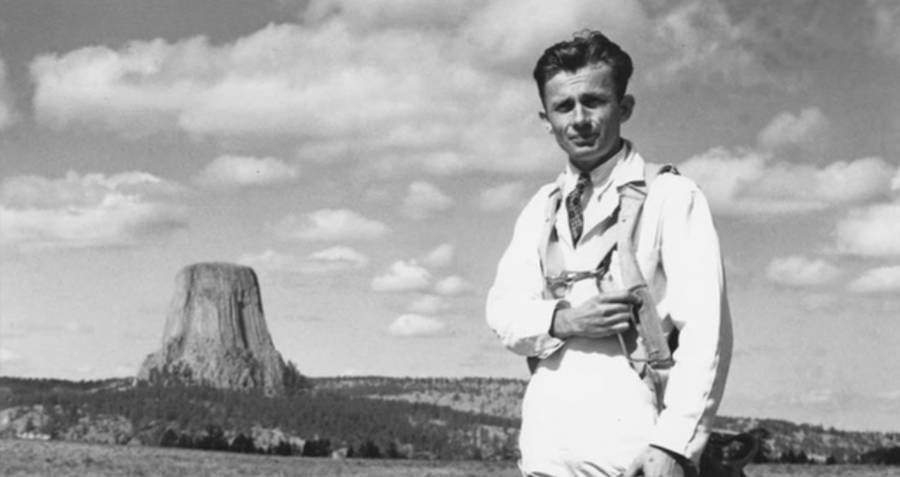 YouTubeGeorge Hopkins standing with Devils Tower in the background.

On Oct. 1, 1941, news crews descended upon Devils Tower National Monument. The 1,200-foot monolith in northeastern Wyoming was known for attracting visitors, but this time it wasn’t the rock formation that everyone was there to see — it was the stranded man on top. 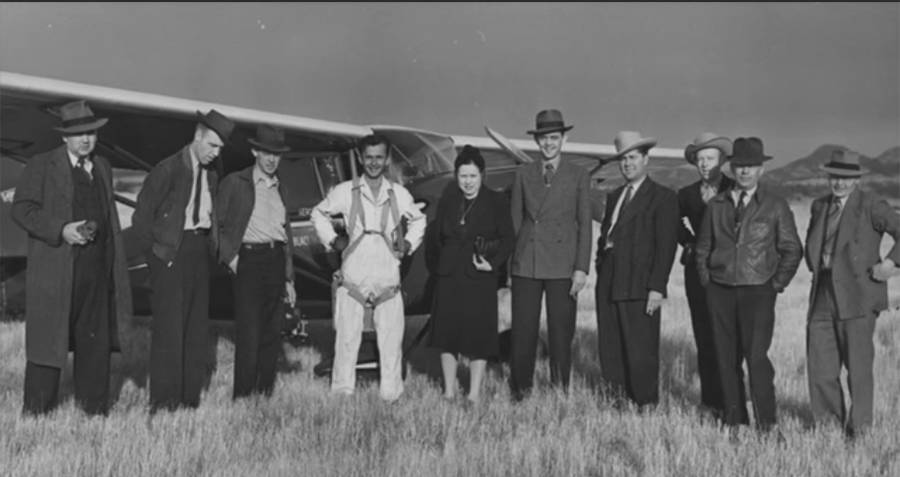 YouTubeGeorge Hopkins and the few people in on his plan, posing in front of his plane.

Several days before becoming stranded atop the tower, professional parachutist George Hopkins had struck a wager with a friend of his. His friend Earl Brockelsby had bet him $50 to parachute down onto the tower, and then climb down a rope to the bottom, a feat that had never been done before.

Parachuting into (or in this case onto) strange places was old hat for Hopkins. He’d spent the better part of his life setting parachuting records, and performing spectacular jumps, and was constantly looking for bigger and more exciting challenges.

His latest idea was to set the world record for the greatest number of parachute jumps in a single day. The day had been set, and Hopkins was in the midst of raising awareness for his upcoming feat. So, when his friend offered up a bet to parachute onto Devils Tower he took it, thinking it would be the greatest publicity move ever.

Perhaps if his jump had gone according to plan it would have generated some publicity, after all, no one had ever done it before. But in the end, the real attention came from the plan’s failures, which resulted in Hopkins becoming stranded atop the monument for almost a week. 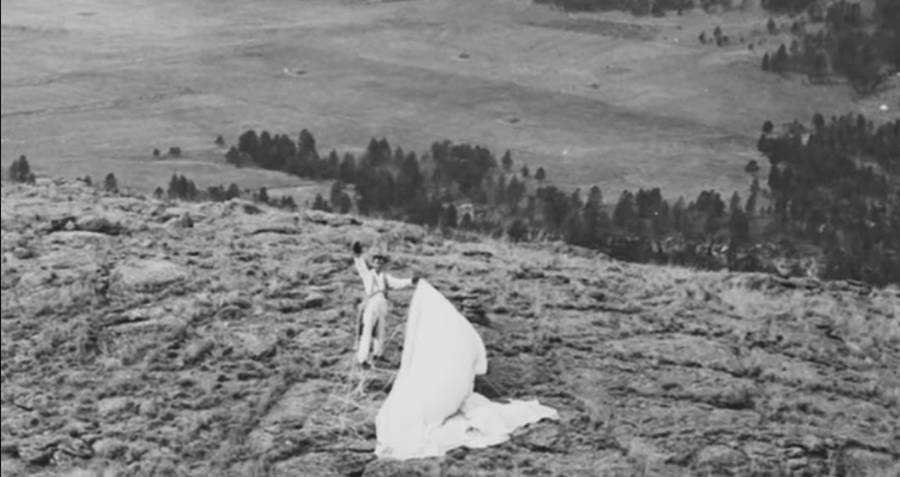 Part of George Hopkins’ issue was that he’d attempted to keep his jump a secret. Whether he knew the National Park Service would never have given him permission, or whether he was simply going for an air of mystery, he set out on his task without the knowledge or consent of the NPS.

He did, however, let a few local reporters in on his plan, under the condition that they would not publish his story until the impressive act was complete. So, in the early morning on Oct. 1, while a lone car full of people watched from below, Hopkins took off in a tiny plane and jumped out over Devils Tower.

Hopkins’ plan was quite a simple one, given the stakes of his jump. He planned to jump out of the plane and land on the top of the monolith, at which point a rope and climbing supplies would be dropped down after him. The top of Devils Tower is relatively flat, though it curves slightly, and is roughly the size of a football field. Given the size, obtaining the dropped supplies should be easy enough.

Unfortunately, this is where Hopkins plan failed. Though he made it safely to the top of the tower, his rope and supplies missed their target on the drop and fell off the edge of the tower. Without a way down, the parachutist was effectively marooned on the peak of Devils Tower.

Ultimately, he realized that his plan was further flawed as even if he managed to retrieve the rope, it was almost 200 feet too short. He wouldn’t have been able to reach the bottom anyway. 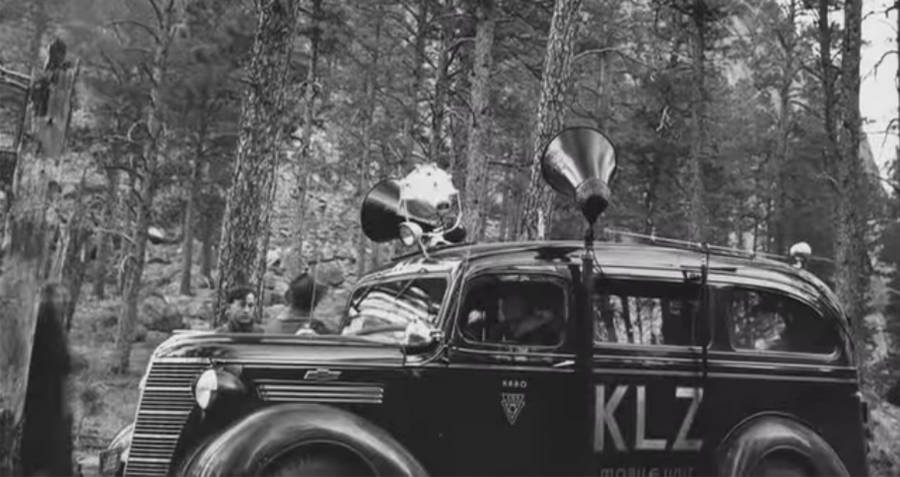 YouTubeA car was equipped with bullhorns and parked below the tower in order to communicate with Hopkins.

Upon realizing that Hopkins wasn’t coming down, either his pilot or the newspaper editor reported him to the park authorities. As it seemed, there was no way for Hopkins to get down unassisted, and therefore this was now an emergency situation.

Another rope was dropped the next day, but that too didn’t go according to plan. After landing, it became tangled and later froze due to the freezing wind, snow, and condensation atop the rock. Try as he might, Hopkins couldn’t get the knots out of the frozen rope.

The National Park Service fielded offers from the Navy to airlift Hopkins out with a helicopter, and from Goodyear who offered to fly in their signature blimp for a rescue mission, but both were deemed too dangerous.

Over the next six days, as the park service and officials attempted to come up with a way to get Hopkins down safely, he remained on top of the rock. Supplies were regularly dropped onto him, such as a bullhorn, a blanket, and some food. At one point, he even requested whiskey, which he claimed was for “medicinal purposes.”

Finally, the park service decided it would be best for someone to retrieve Hopkins personally.

Jack Durrance was their best option. The experienced climber had been one of the first people to ever climb the tower a few years earlier and was deemed the most qualified. He was more than willing to lend a hand, and traveled all the way from Dartmouth, where he was attending school, to do so.

Finally, after six days, Durrance climbed the tower and helped Hopkins down. Though he was unharmed, Hopkins was clearly tired after his endeavor.

“I bet I counted the big boulders on that damned mountain peak a thousand times,” he said of how he spent his time atop the peak. “I gave ‘em all names you couldn’t print if I told you what they were.”

As for the bet that started it all?

“I had my hand out fishin’ for the dough when I hit the ground,” George Hopkins said. “Earl paid off.”

Next, check out Victor Lustig, the conman who sold the Eiffel Tower. Then, read about Hiroo Onoda, who kept fighting World War II for 29 years after it ended.