The Controversial Story Of Gertrude Bell, The British ‘Desert Queen’ Of Iraq

Loathed by British imperialists but beloved by the Iraqis, Gertrude Bell negotiated a sovereign Iraq — while opposing women’s suffrage in her own home country.

On Mar. 12, 1921, three British diplomats posed in front of the Sphinx in Egypt. They were members of the Cairo Conference, which was given the power to shape the Middle East and Asia in the post-World War I era. Among them was Gertrude Bell, a wildly successful archaeologist, spy, and explorer.

With her was Winston Churchill, who considered her a friend, and T.E. Lawrence, known around the world as Lawrence of Arabia.

But Gertrude Bell perhaps had the biggest smile on that March day in 1921, as she had just negotiated self-government for the Iraqis, forcing British imperialists to keep a promise to their World War I allies that they wanted to break.

Her determination to create an Arab nation in the fall of the Ottoman Empire made her a hero to Iraqis at the time, but her legacy today and in Britain is more complicated.

Who Was ‘The Female Lawrence Of Arabia,’ Gertrude Bell? 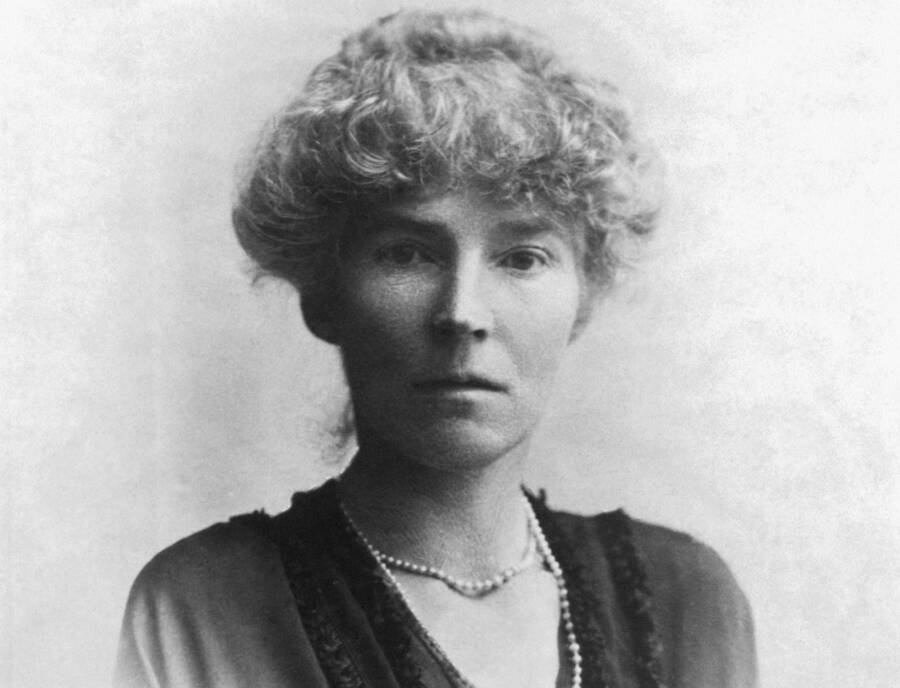 Getty ImagesBell first visited Iran in 1892, where her uncle was British ambassador.

In the Oscar-winning movie The English Patient, a group of British soldiers intending to cross the Arabian desert search for a route across a mountain range on their map. “The Bell maps show a way,” one promises. “Let’s hope he was right,” another responds.

But the Bell maps weren’t created by a man at all, they were made by Gertrude Bell after she crossed the mountains several times on trips for the Royal Geographic Society. The maps were only part of Bell’s extensive legacy in the Middle East.

Born On July 14 in 1868, Gertrude Bell pursued a modern history degree at Oxford, where she became the first woman to earn first-degree honors there.

After graduating, Bell became an international explorer. An avid climber, she had a mountain in the Alps named “Gertrudspitze” in her honor after she became among the first to reach its summit. Her adventurous spirit caught her in perilous situations, however. 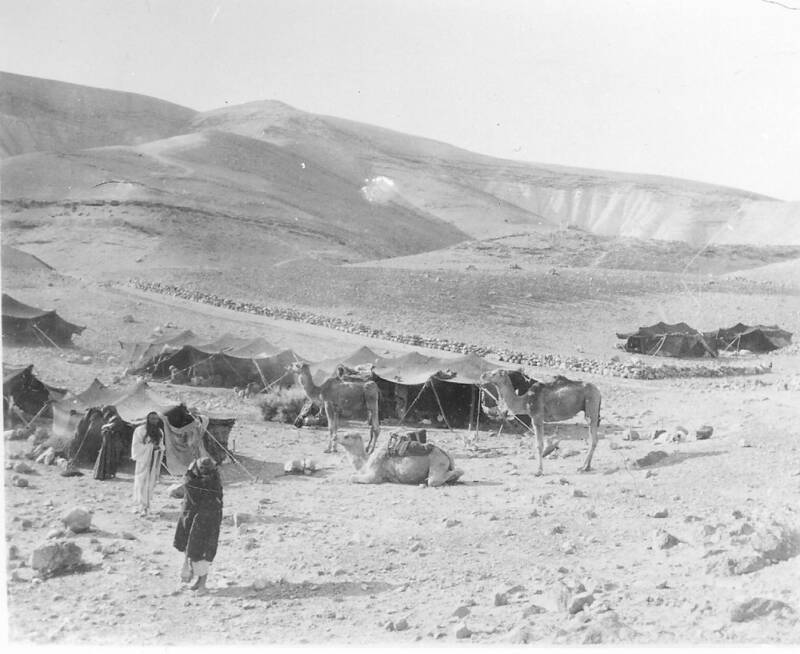 Gertrude Bell Archive, Newcastle UniversityOne of Bell’s photographs of bedouins in the Judean desert, circa 1900.

In 1902, disaster struck when a blizzard trapped Bell in the Swiss Alps. Bell hung from the side of a mountain for more than two days before the blizzard faded. Two years later, in spite of frostbitten hands and feet, Bell successfully climbed Matterhorn.

“It was beautiful climbing, never seriously difficult, but never easy,” Bell wrote, “and most of the time on a great steep face which was splendid to go upon.”

These mountains were just the first in a series of peaks she’d reach in her career.

Early Adventures In The Middle East 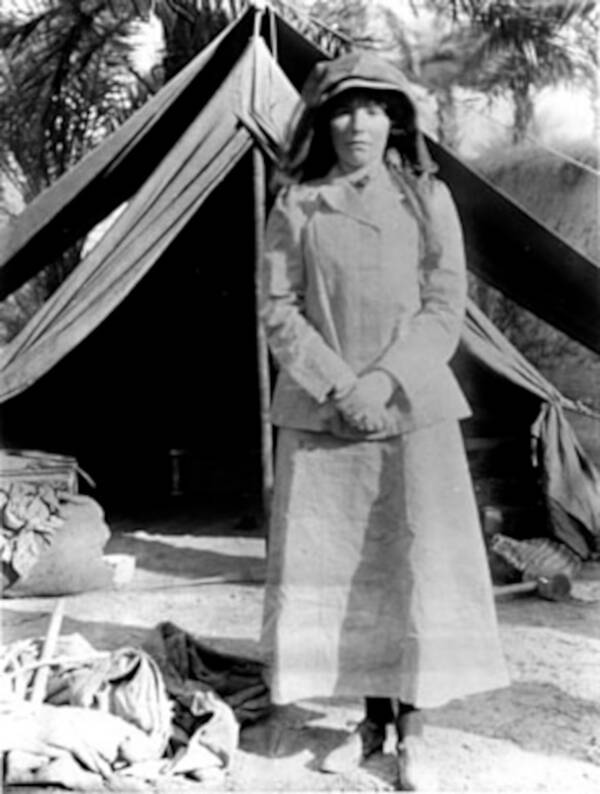 Bell switched between freezing and scalding terrain, and first began her journey across the Middle East in 1892. In 1909, Bell crossed Mesopotamia, photographing archaeological sites. Her pictures have become one of the most reliable records of ancient architecture after ISIS and the Syrian civil war destroyed many of the sites in recent years.

Then around 1913, she headed for Persia, and she published books and photographs on her observations about Syria and Mesopotamia, as well. Unlike many of her British contemporaries, Bell devoted herself to understanding the language, politics, and culture of the Middle East. She became fluent in Arabic, Persian, and Ottoman Turkish. That dedication won her many local allies.

That year, Bell also met a young T.E. Lawrence, a British military officer who helped Arab nations in the Middle East win their independence from England.

At the time, Lawrence was working as an assistant to an archaeologist. After their meeting, Bell called Lawrence “an interesting boy” and predicted, “He’s going to make a traveler.” She was right.

When World War I broke out, Bell knew the Middle East better than almost anyone in Britain and she’d won loyal allies among many Mesopotamian tribes. The British recruited Bell to win the war against the Ottomans, which still ruled large areas of the Middle East, Eastern Europe and North Africa.

In 1915, she became the first woman to work for British military intelligence. With no precedent for her title, she became known as “Major Miss Bell.”

Her Role In The Creation Of Iraq 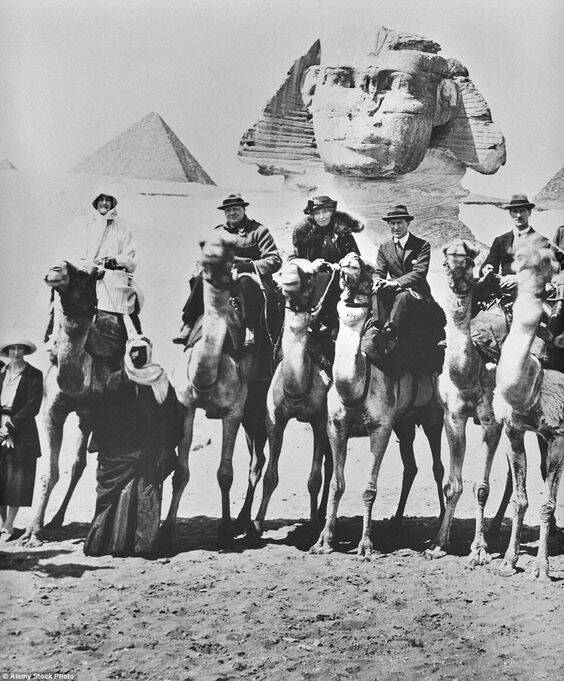 Major Miss Bell worked in Cairo during World War I alongside T.E. Lawrence. Together, they analyzed intelligence and recommended the British recruit Arab allies to fight against the Turks to beat the Ottomans.

Bell reached out to her Arab allies with a promise of self-determination when the war ended and the Ottoman Empire had fallen. Though the British never planned to keep that promise, Bell made sure that they did.

“Dearest father, I’m having by far the most interesting time in my life,” Bell wrote of her charge to create an Arab state two weeks after World War I ended in November 1918. “It doesn’t happen often that people are told that their future as a state is in their hands, and asked what they would like.”

Bell pushed for Arabic self-rule at the 1919 Peace Conference and in a 1920 report to the government. Then, in 1921, she returned to Cairo with Lawrence and Winston Churchill to advocate for the Arab rule of Iraq.

At the conference, Bell helped draw the southern border of Iraq and she pushed for Faisal I, who helped the British during the war, to rule the new monarchy. On Oct. 3, 1932, the kingdom of Iraq was granted independence.

Working hand-in-hand with the new Iraqi government, Bell helped found the Iraq National Museum. To honor her contributions, Faisal named Bell as the director of antiquities, where she fought to keep Mesopotamian artifacts in Iraq instead of in British museums. 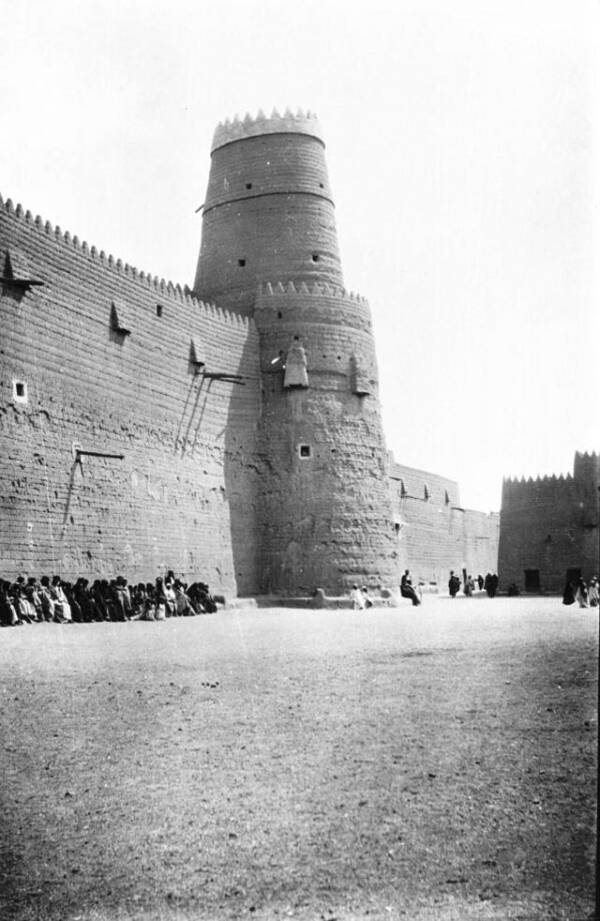 Bell’s commitment to Arab independence wasn’t respected by everyone in the west. For instance, she earned the hatred of British imperialists who wanted to play a more active role in the Middle East.

Gertrude Bell ultimately moved to Baghdad and returned to archaeology. She lived out her final years there struggling with lung disease and was found dead of an overdose of sleeping pills on July 12, 1926. Whether her death was suicide or an accident remains unknown.

Honored though she was by the Iraqis, Bell’s legacy in Britain was more complicated, especially as she wholeheartedly opposed women’s suffrage. She had campaigned against a woman’s right to vote and even became an Honorary Secretary of the Anti-Suffrage League in 1909.

And although the monarchy she fought for eventually failed, catapulting Iraq into a period of violence and unrest that continues to this day, Bell still has many admirers there. When the British diplomat Rory Stewart served there in 2003, he reported, “I often heard Iraqis compare my female colleagues to ‘Gertrude Bell.'”

Gertrude Bell wasn’t the only globetrotting woman of her era. Next, read about Isabella Bird, the first woman to be elected Fellow of the Royal Geographical Society. Then, check out these stunning photos of 1930s Iraq.