The Blood-Soaked Story Of Giovanni Brusca, The Coldest Killer In The History Of The Mafia

Known as "The Pig" due to his thirst for blood, Giovanni Brusca killed between 100 and 200 people for the Sicilian Mafia in the late 20th century. 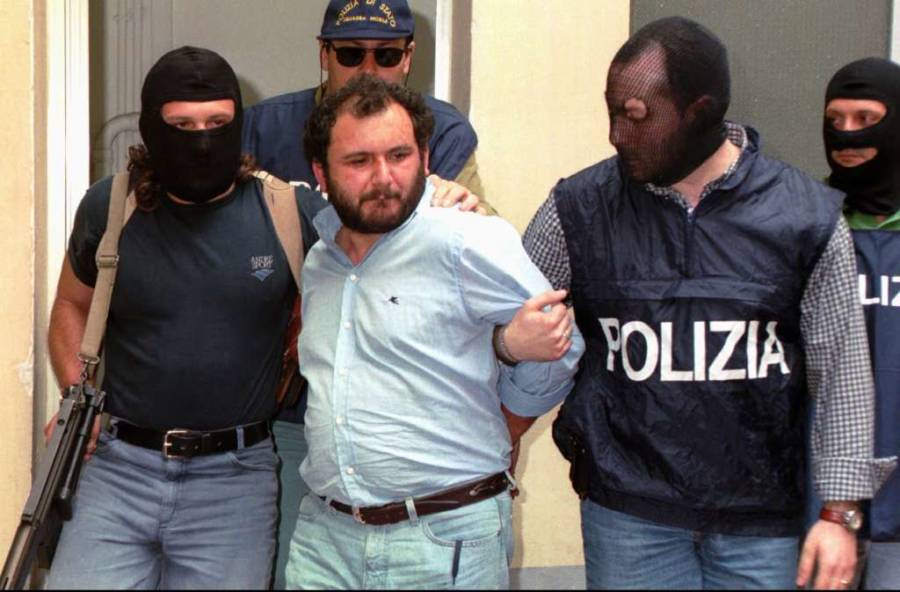 YouTubeAuthorities arrest Giovanni Brusca near Agrigento, Sicily on May 20, 1996.

Sicilian Mafia hitman Giovanni Brusca murdered so many people that he actually lost count. From the 1970s to the 1990s, Brusca would kill whoever the Mafia wanted dead — from government officials to innocent children. And he wasn’t even a little bit sorry.

He was known as “The Slaughterer,” “The Executioner,” and even as “The Pig” — both for his body shape and his thirst for blood.

But to Brusca, murder was simply his business — and he was very devoted to his job. He once said, “In his heart, a Mafioso isn’t a bloodthirsty person or a terrorist. The rule is that he kills on behalf of the organization.”

After Brusca was arrested in 1996, he guessed that his kill total was somewhere between 100 and 200 victims. Assuming that’s true, he just might be the deadliest Mafia hitman of all time.

The Birth Of A Deadly Mafia Hitman 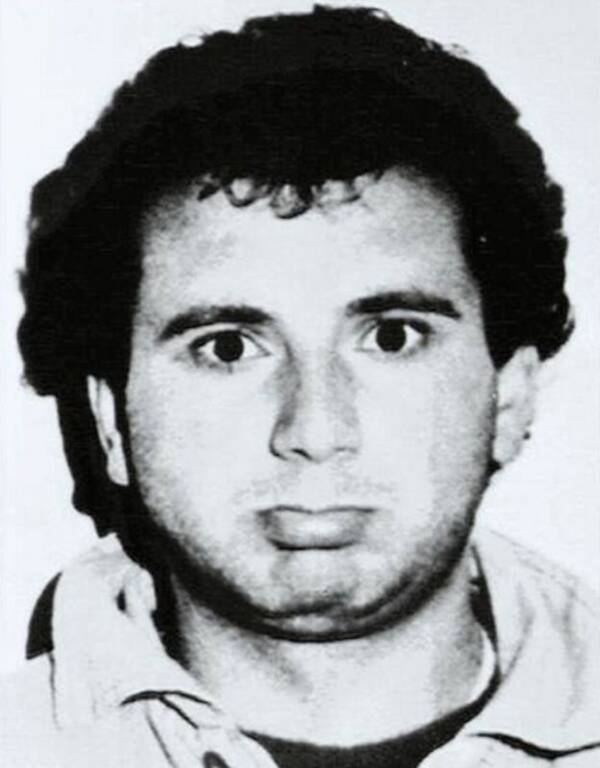 For Giovanni Brusca, there was never any life outside of the Mafia. Brusca was born on February 20, 1957, in San Giuseppe Jato, Sicily, the latest in a long line of Mafia members. His great-grandfather, grandfather, and father had all been in the Mafia, and his father was the local boss in his hometown.

The lifestyle of a Mafioso was ingrained in Brusca from an early age. By the time he was five years old, he had already been to prison — not as an inmate, that would come later — to visit his father behind bars. As he grew older, he aided fugitives on the run with food and clothing. He also cleaned his father’s weapons, which were stashed and buried in nearby fields.

When Giovanni Brusca was just 18 years old, he killed his first victim. A year later, he killed his second victim, gunning the target down outside a crowded cinema with a double-barreled shotgun.

With two kills to his name, he was officially initiated into the Mafia by “the boss of bosses,” Salvatore Riina. Once he became an official member, Brusca started out as a driver for another boss, Bernardo Provenzano.

But it wasn’t long before Brusca was tasked with doing what he did best: killing people.

Often, he’d torture victims first to “make them talk,” when that was part of the assignment. But they usually didn’t reveal any valuable information because they knew that they were going to die anyway.

Torture at the hands of Giovanni Brusca might last for half an hour, which probably seemed like an eternity for the victim. From breaking legs with a hammer to pulling on ears with pliers, Brusca showed no mercy.

Finally, he and his men would usually strangle their victim to death, a process that typically took an agonizing 10 minutes. Two men would hold the victim’s feet and another two would hold the arms as another man slipped a thin nylon cord around the person’s neck.

Once the victim was dead, Brusca had creative ways of getting rid of the corpse. “I’ve dissolved bodies in acid; I’ve roasted corpses on big grills; I’ve buried the remains after digging graves with an earthmover,” he wrote in his memoirs. “Some pentiti [former Mafiosi] say today they feel disgust for what they did. I can speak for myself: I’ve never been upset by these things.”

And if his excruciating methods of torturing, killing, and dumping bodies suggest that these murders were crimes of passion, that was not the case at all. Most of the time, Brusca didn’t even know the victim. A boss would give the order and he’d follow it. It was that simple.

On one occasion, he was given a time and place to kill an unidentified target on a certain make of tractor. Three different people passed by on three different tractors. So Brusca killed them all.

The War Between The Mafia And The Italian Government 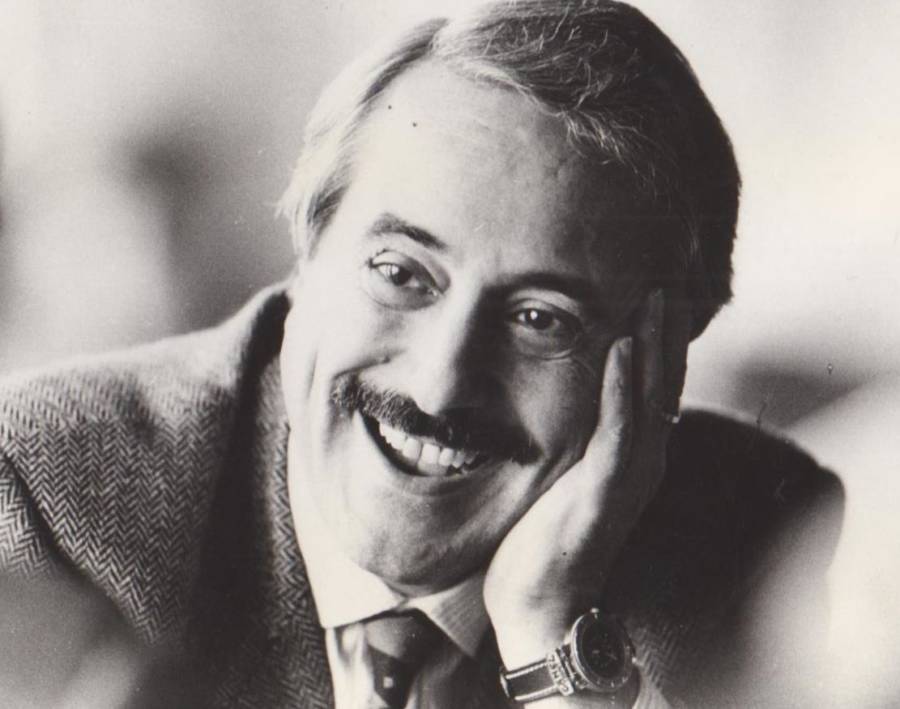 Wikimedia CommonsGiovanni Falcone, an Italian judge who tried to bring the Mafia to justice, was one of Brusca’s victims.

Giovanni Brusca didn’t just commit murders. He also helped wage a massive war against the Italian government itself. In the 1980s, as part of Salvatore Riina’s death squad, Brusca and his men battled with police using AK-47s and targeted prosecutors with car bombs.

The first target to die was Rocco Chinnici, the Palermo chief prosecutor, in July 1983. The Mafia killed him with a powerful car bomb. The force of the explosion flung his car three stories high before it fell down to Earth. Two bodyguards died alongside Chinnici, and 20 bystanders sustained injuries.

Why target Rocco Chinnici? The prosecutor had created the Antimafia Pool, a group of magistrates set on bringing the Mafia down.

After Chinnici was killed, Giovanni Falcone took over as head of the Antimafia Pool. In his new position, Falcone was given unprecedented powers to crack down on the Mafia. Between February 1986 and January 1992, more than 300 Mafiosi were given life sentences (including Riina, although he had fled and thus received his sentence in absentia).

But by 1990, many of the Mafiosi brought down by Falcone had appealed and were released on technicalities. Meanwhile, some in the government tried to cut a deal with the Mafia to stop prosecutions in order to halt the bloodshed. But in January, Falcone and fellow Antimafia prosecutor Paolo Borsellino had many of the appeals thrown out and some of the previously successful ones overturned.

Now more than ever, Falcone and Borsellino had targets on their backs — and both were ultimately killed by car bombs two months apart from each other in 1992. Giovanni Brusca later admitted to detonating the bomb that killed Falcone, his wife, and two Sicilian special anti-terrorist agents.

With Falcone’s assassination on May 23, 1992, the Mafia launched an unprecedented war against the state. 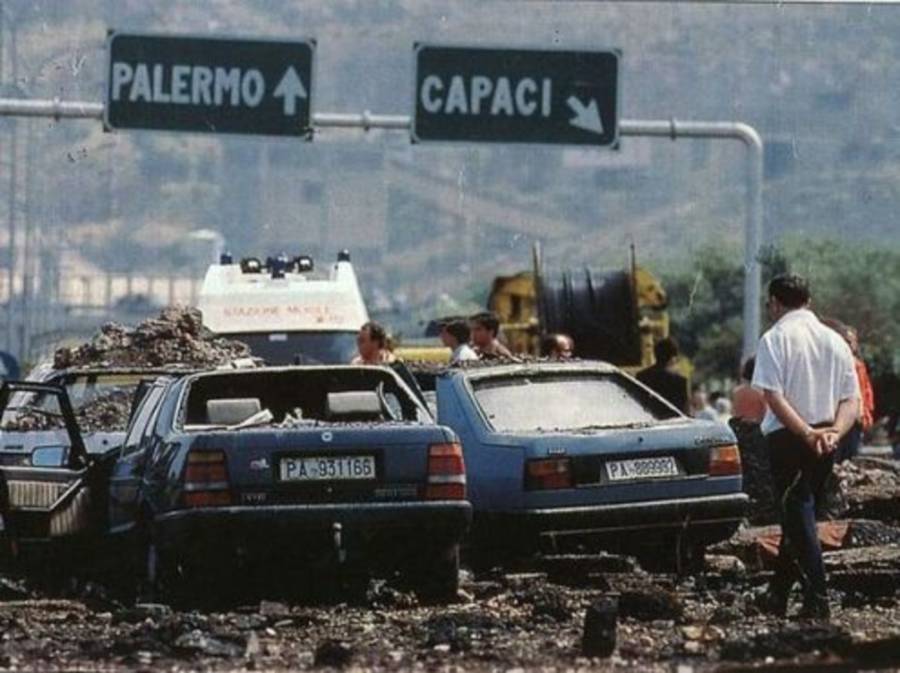 Wikimedia CommonsThe aftermath of the bombing carried out by Giovanni Brusca that killed Giovanni Falcone in Sicily on May 23, 1992.

Following the Falcone assassination, Riina unleashed hell. The Mafia used car bombs against police and blew up government buildings. And Brusca played his part as a loyal soldier in the war.

But Italian law enforcement fought back every chance they got. They eventually arrested a key Mafioso, Santino Di Matteo, who was an accomplice of Brusca’s in the assassination of Falcone.

Before long, Di Matteo became a government informant. He spoke to authorities about everyone who was involved in the assassination, including Giovanni Brusca.

In addition, Di Matteo’s information led to the capture of Riina by officers of the Carabinieri (Italy’s paramilitary national police force) on January 15, 1993. At Riina’s trial in October 1993, he received a life sentence. 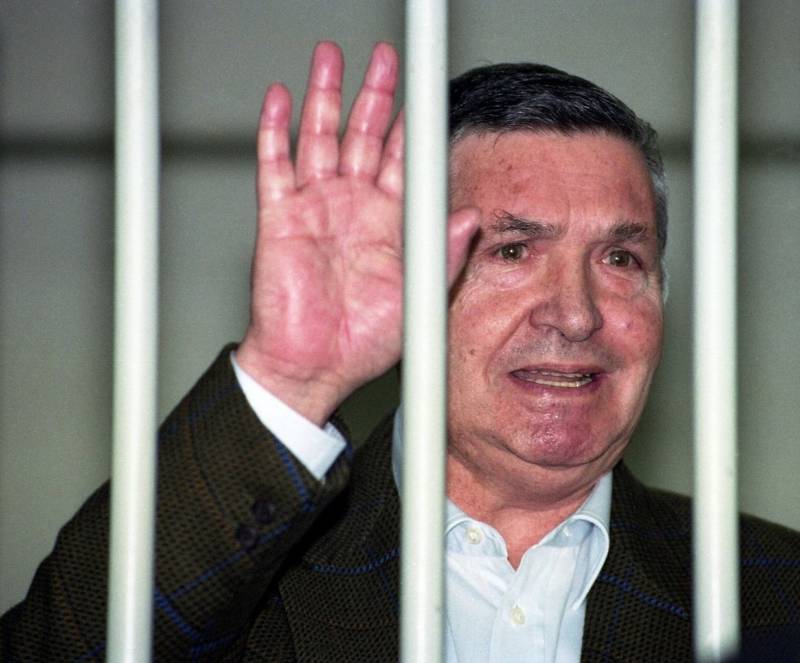 Wikimedia CommonsSalvatore Riina during his trial in Rome in 1993.

With Riina behind bars, Brusca emerged as a top Mafia boss. One of his first orders of business was punishing Di Matteo for his betrayal.

In 1993, Brusca kidnapped Di Matteo’s 11-year-old son, Giuseppe, to try and convince Di Matteo to recant his testimony. Over a 28-month period, Brusca tortured the boy while starving him and keeping him locked in a cage. Brusca’s men even sent photos of the battered boy to his father.

And in January 1996, when the boy was 14 years old, Brusca gave an order to his men to “get rid of the puppy.” He had the boy strangled to death and his body dissolved in acid.

Even then, Di Matteo never recanted — and his information led to Brusca being convicted in absentia for detonating the car bomb that killed Falcone.

The Fall Of ‘The Executioner’ 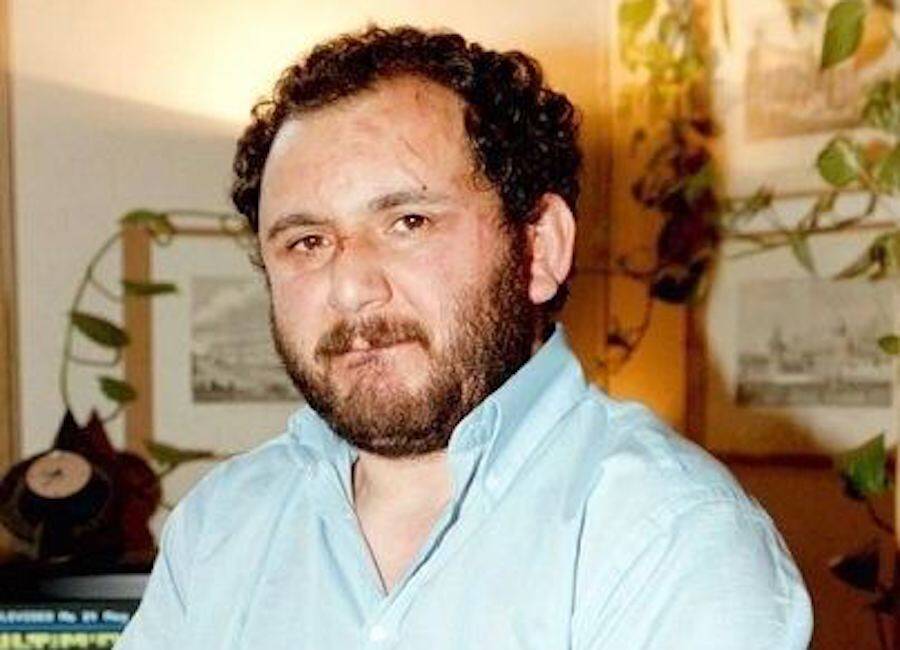 YouTubeGiovanni Brusca, shortly after he was apprehended in 1996.

The law finally caught up to 39-year-old Giovanni Brusca in the Sicilian countryside near Agrigento.

Italian police had been closing in for a while. First, they’d tapped into his phone. While monitoring a call, they heard the motorcycle engine of a plainclothes officer roar past — and knew exactly where they could find him.

On May 20, 1996, about 400 officers surrounded the house where Brusca was staying with his family. When authorities raided the home, they found that the Brusca family was watching a television program on Falcone — whom Brusca had killed almost exactly four years earlier. Both he and his brother surrendered to authorities without a fight.

Although Italian police celebrated Brusca’s capture, the chief prosecutor in Palermo, Giancarlo Caselli, was less optimistic. In his view, arresting Giovanni Brusca was just clipping one branch off an old, strong tree.

“To capture a boss of this level is extremely important,” Caselli said. “But above all else, there is the Cosa Nostra, with its capacity to quickly replace top and mid-level people, thanks to an organization with old and deep roots.”

But perhaps Caselli didn’t have to worry so much. Following Brusca’s arrest, the Sicilian Mafia began to lose strength and influence.

In 2008, Giuseppe Di Matteo’s mother said she took some solace in the fact that her son’s death led to the weakening of the powerful Mafia. “We have won, Giuseppe has won,” she said. “Because I think thanks to him the Mafia has been wiped out, if not completely then at least 70 percent.”

As for Giovanni Brusca? Despite his brutal vengeance against Di Matteo for becoming an informant, he eventually became one himself. His testimony led to additional sentences for his old boss, Riina, in connection to the assassinations of Falcone and Borsellino.

Today, Giovanni Brusca remains in prison serving multiple life sentences — a fitting end for a man who had such a grisly career.

After this look at Giovanni Brusca, see some intense Letizia Battaglia photos that’ll take you right into the bloody heart of the Sicilian Mafia. Then, see what life was like inside Murder Inc., the New York mob’s deadly hit squad.