Meet Gladys Presley, Elvis Presley’s Mother And The ‘Love Of His Life’

Elvis Presley was known for being extremely close with his mother Gladys Presley. So when she tragically died of a heart attack in 1958, he was never the same again. 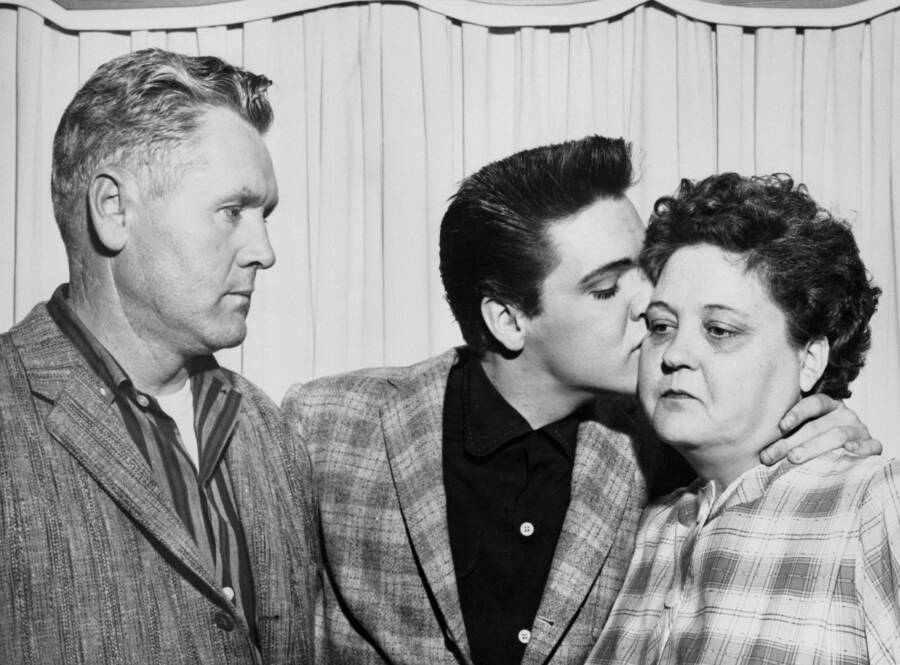 Bettmann/Getty Images Gladys Presley receiving a kiss from her son, Elvis, before his induction into the U.S. Army.

Elvis Presley spent much of his career as an American superstar — and stole the hearts of countless women. But according to some, the classic crooner only had eyes for one woman: his mother, Gladys Presley.

Gladys loomed large in Elvis’s life. Overprotective and fawning, she poured her ambitions and affections into her only son. But when he became famous and successful, she withered in the unforgiving glare of the spotlight.

Gladys Presley And The Birth Of Elvis

Born Gladys Love Smith on April 25, 1912, Gladys Presley grew up worlds away from the fame and riches that her son would one day achieve. The daughter of a cotton farmer, she came of age in Mississippi.

In the 1930s, Gladys fatefully met Vernon Presley at church. Though she was four years older than him — and Vernon, at 17, was underage — they lied about their ages in order to get married in 1933. Soon, Gladys was pregnant. 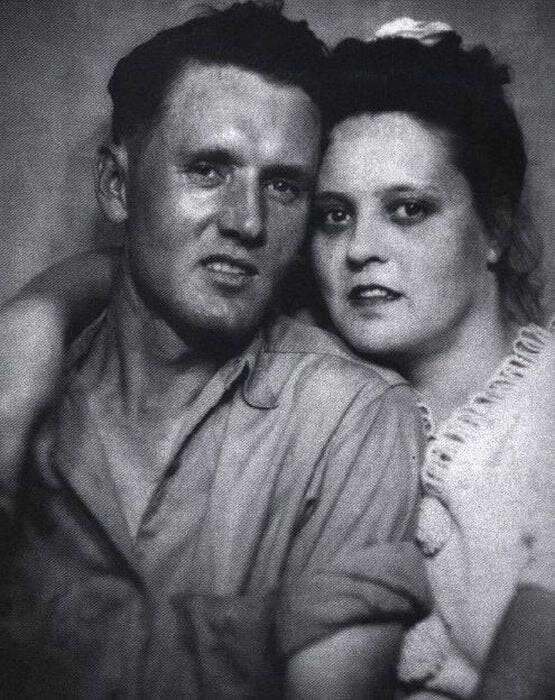 PinterestVernon and Gladys Presley. He was 17 years old when they got married, and she was 21.

But when it came time for her to give birth on January 8, 1935, tragedy struck. Gladys had twins, but the first boy, Jesse Garon Presley, was stillborn. Only the second boy, Elvis Aaron Presley, survived.

To Gladys, this meant that Elvis absorbed all the potential that his twin brother would’ve had if he’d survived. She allegedly believed that “when one twin died, the one that lived got all the strength of both.”

In the years to come, she would give Elvis twice the amount of affection, too.

As Elvis grew up, Gladys Presley — perhaps traumatized by the loss of his twin brother — always kept him close. When he was a baby, she even dragged him in a sack beside her as she worked in the cotton fields.

Mother and son gave numerous pet names to each other, constantly communicated in baby talk, and even shared the same bed well into Elvis’s teenage years due to poverty. When Vernon briefly went to prison for forging a check in 1938, Gladys Presley and her son grew even closer.

According to Elvis, the first song he ever recorded was for his mother. In 1953, at the age of 18, he went to Sun Studio in Memphis to record “My Happiness” as a birthday gift for Gladys. That record proved to be a spark — which would eventually flare into superstardom. 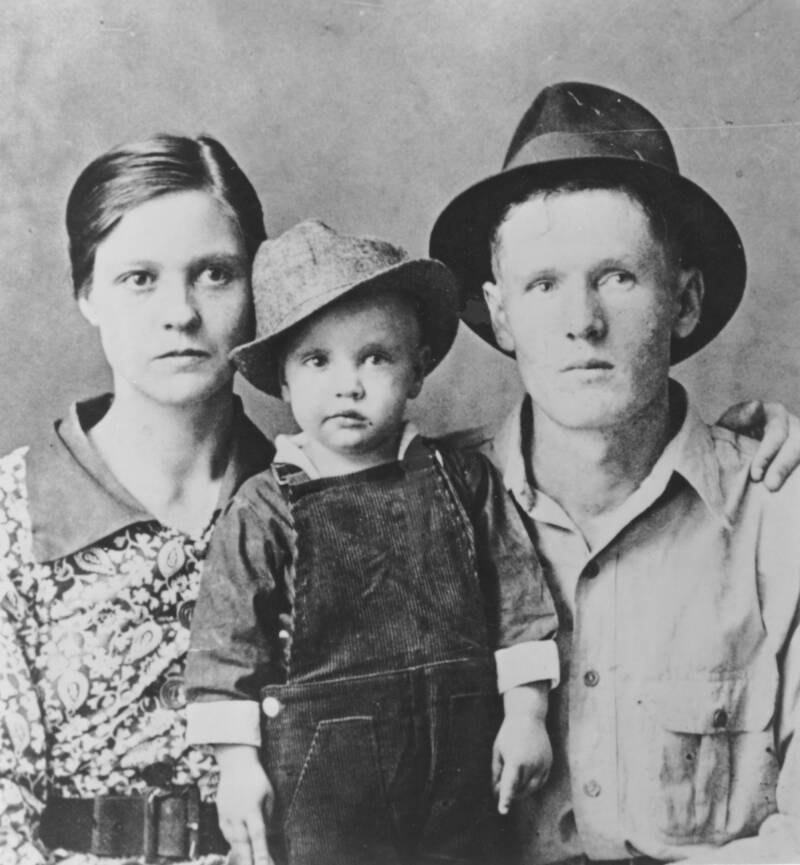 But Elvis’s rise marked Gladys’s fall. Though she was proud of her son, Gladys found his fame hard to handle. At Elvis’s Memphis mansion, Graceland, neighbors mocked how Gladys did laundry outdoors, and Elvis’s handlers asked her to stop feeding her chickens on the lawn.

“I wish we was poor again, I really do,” she once told a friend on the phone. To her cousin, Gladys called herself “the most miserable woman on Earth.”

Depressed, isolated, and bewildered by her son’s fame, Gladys Presley started to drink and take diet pills. By 1958, she had developed hepatitis.

In August 1958, news spread that Elvis Presley’s mother was ill. Elvis, then serving in the U.S. Army and stationed in Germany, quickly traveled home to see her and arrived just in time. On August 14, 1958, Gladys Presley died at age 46. Though the cause was a heart attack, it was later found that one of the contributing factors was liver failure due to alcohol poisoning.

“It broke my heart,” Elvis Presley said. “She was always my best girl.”

At her funeral, Elvis was inconsolable. “Goodbye, darling. We loved you,” the singer said at Gladys Presley’s gravesite. “Oh God, everything I have is gone. I lived my life for you. I loved you so much.”

Elvis could barely walk after burying his mother. And many close to him said that Elvis changed irrevocably after Gladys’s death, grieving her loss for years and thinking about her in relation to just about everything he did. 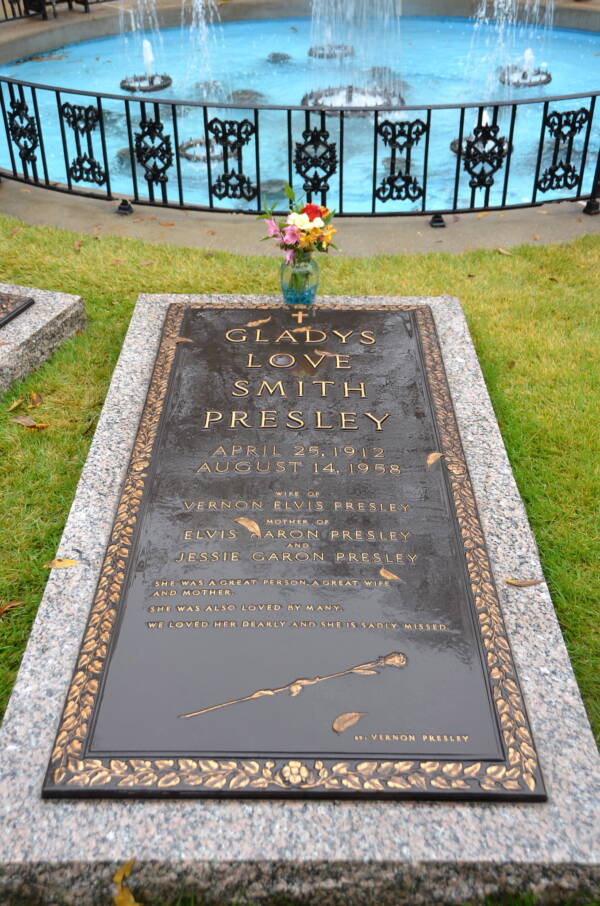 Even in death, Elvis Presley’s mother cast a large shadow in the singer’s life. When he met his future wife Priscilla, he talked incessantly about Gladys. It’s even believed that he saw a resemblance between the two of them. And Priscilla would later note that Elvis’s mother was the true “love of his life.”

Though many found his close relationship with Gladys heartwarming, others raised questions about how “unusually” close they were. Even Elvis’s father Vernon — who was also close to his son — appeared amazed by the tight-knit relationship between mother and son. It was one Elvis never forgot.

In an odd way, even Elvis’s death aligned with his mother. Almost exactly 19 years after he buried Gladys, Elvis Presley died on August 16, 1977.

Ever the loyal son, Elvis brought his family back together in death. He and his parents are buried side by side at his Graceland mansion.

After reading about Gladys Presley, learn more facts about Elvis Presley. Then, discover the bizarre true story of how Elvis met Richard Nixon.