Experts blame public urination on the high levels of drugs in Whitelake River, which runs through the festival grounds. 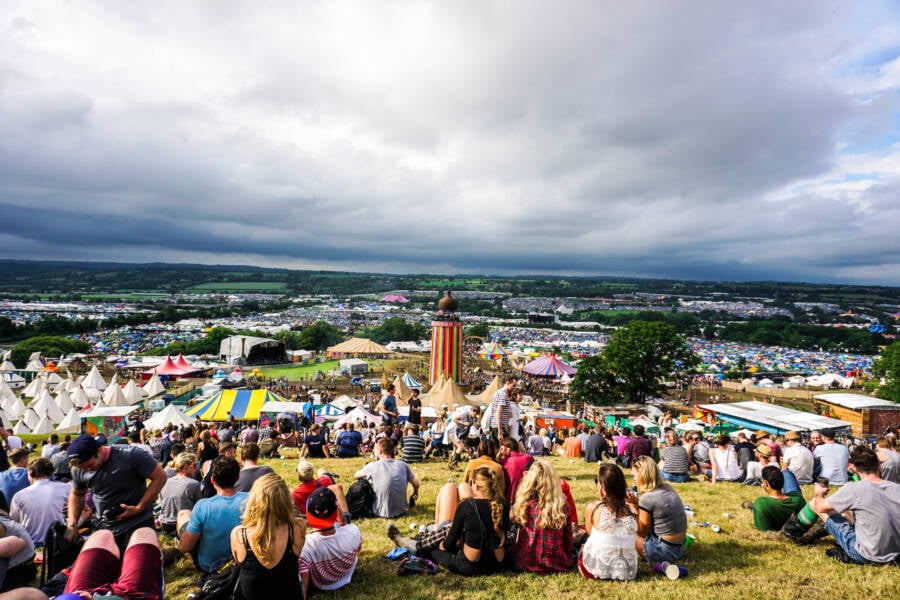 Wikimedia CommonsGlastonbury launched a 2019 campaign called “Don’t Pee On The Land” and claimed it had “measurable success.”

The Glastonbury Festival in Somerset, England is the yearly stomping ground of nearly 200,000 music fans. While the event is celebrated for bringing a fair amount of tourist capital to the area, it’s not without its disadvantages.

According to a new study, inebriated festival attendees leak (pun intended) harmful levels of illegal drugs into a nearby river via public urination. This puts aquatic wildlife in the area at risk.

This includes rare European eels, a protected species in the area. These animals inhabit the Whitelake River, which is in very close proximity to the Worthy Farm festival grounds.

The study, published in the Environment Research journal, was led by Dan Aberg of the School of Natural Sciences at Bangor University. With Dr. Daniel Chaplin from the Center of Environmental Biotechnology, he measured traces of the drugs upstream and downstream before, during, and after the 2019 Glastonbury Festival.

According to The Independent, the results showed the amount of MDMA was 104 times greater downstream than upstream in weeks after the festival, and the amount of cocaine was 40 times greater. The controversial data has done quite a bit to raise awareness, and lead the way to potential solutions. 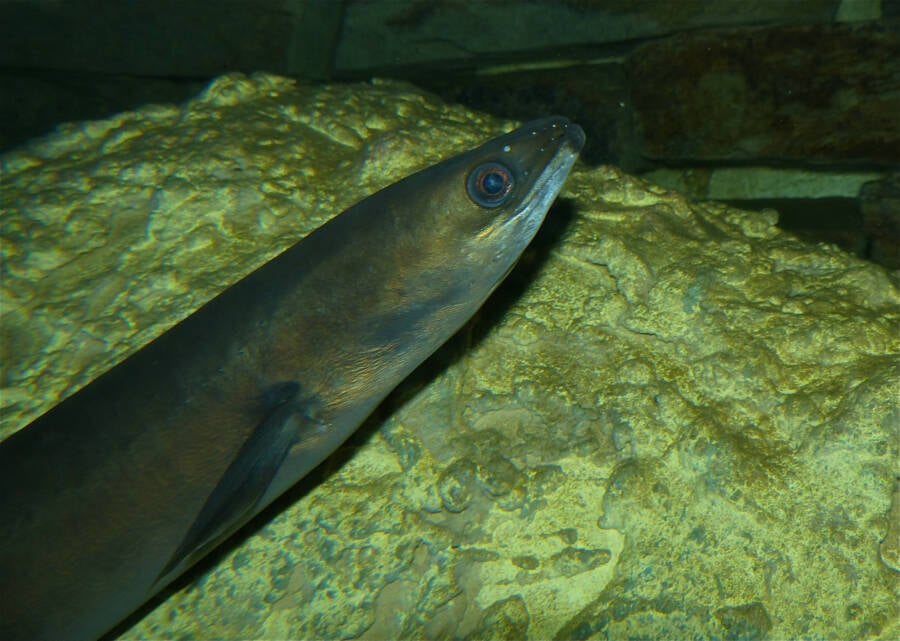 Wikimedia CommonsThe study found the amount of MDMA was 104 times greater downstream than upstream in the weeks after the festival.

Aberg’s research in 2019 came at a fortuitous time, especially since last year’s festival was canceled due to the coronavirus pandemic. Unfortunately, the results were far less invigorating. While the yielded levels of cocaine were found to be non-harmful to Whitelake’s aquatic life, the amount of MDMA certainly was.

“Illicit drug contamination from public urination happens at every music festival,” said Aberg. “Unfortunately, Glastonbury Festival’s close proximity to a river results in any drugs released by festival attendees having little time to degrade in the soil before entering the fragile freshwater ecosystem.”

The two researchers have since urged concertgoers to take advantage of the official festival toilets and urinals. They’ve also stated that additional studies should be conducted into how best to tackle the issue. For example, constructed treatment wetlands (CTWs) may help reduce and delay the impact of these drugs into the soil.

“Our main concern is the environmental impact,” said Dr. Christian Dunn from Bangor University. “This study identifies that drugs are being released at levels high enough to disrupt the lifecycle of the European eel, potentially derailing conservation efforts to protect this endangered species.” 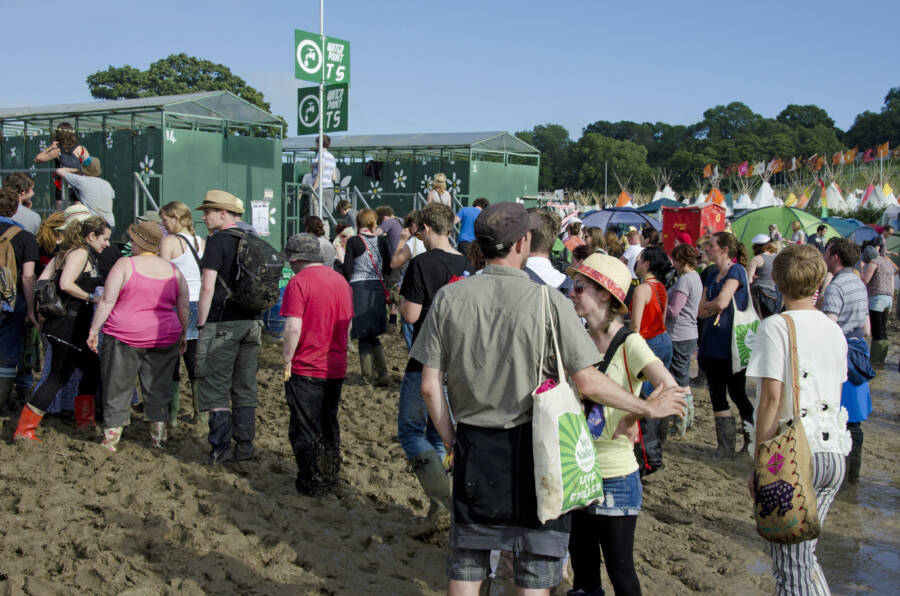 Rachel D/FlickrWith just under 200,000 concertgoers each year, the lines for public toilets are extensive.

“Education is essential for environmental issues, just as people have been made aware of the problems of plastic pollution, and Glastonbury have made great efforts to become plastic-free, we also need to raise awareness around drug and pharmaceutical waste,” said Dunn. “It is a hidden, worryingly-understudied yet potentially devastating pollutant.”

To their credit, Glastonbury organizers have long ago launched a campaign called “Don’t Pee On The Land.” It was implemented precisely to raise awareness of the detrimental impact of public urination on the grounds. Furthermore, the festival has worked closely with the Environment Agency on the issue.

In response to the latest data, organizers said that protecting local wildlife was of “paramount importance” to the festival and that public urination was “the biggest threat to our waterways and the wildlife for which they provide a habitat.” They also said that the Environment Agency raised no concerns following the 2019 event.

“We move heaven and earth to keep urine out of the river,” he said. “We have a whole lot of people monitoring the river every two hours. People don’t urinate in the river because we have so many people stopping that from happening. And they don’t pee on the grass outside the river either.” 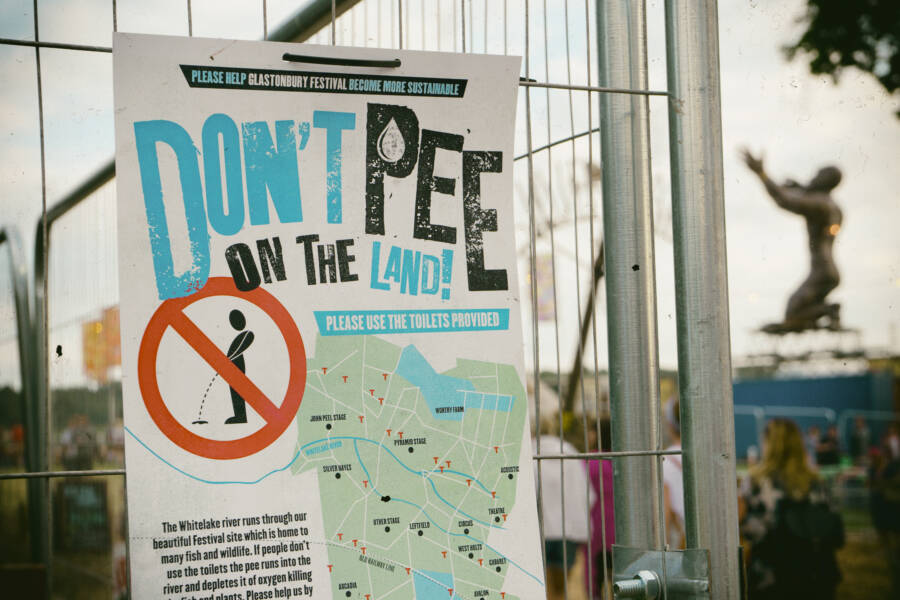 Rachel D/FlickrAs evident by the study, the “Don’t Pee On The Land” campaign hasn’t been entirely successful.

“The people who come to this festival are so environmentally concerned,” said Eavis. “They are incredibly good people, so conscientious.”

Ultimately, the data appears to have spoken for itself. The two researchers made sure to conduct the same tests on Redlake River, which doesn’t cross Worthy Farm in the slightest, and found “no significant changes in any illicit drug levels, further confirming that drug release was likely dependent on the festival site.”

As it stands, Dan Aberg and Dr. Daniel Chaplin believe the most rational and effective approach to resolve this issue could lie in CTWs. Also known as reed beds, they use the natural function of soil, living organisms, and vegetation to treat wastewater before it inevitably flows into any nearby body of water.

For Dr. Dunn, it is essential to further study the effects of drug and pharmaceutical waste — which he called “a hidden, worryingly-understudied yet potentially devastating pollutant.”

After reading about a river near Glastonbury showing harmful traces of MDMA and cocaine, learn about magic mushrooms potentially being legalized for PTSD and anxiety. Then, read about the study that found traces of cocaine in every shrimp in England.