The True Story Of Cathay Williams, The First Black Woman To Join The U.S. Army

In 1866, Cathay Williams changed her name to "William Cathay," disguised herself as a man, and became a Buffalo Soldier. 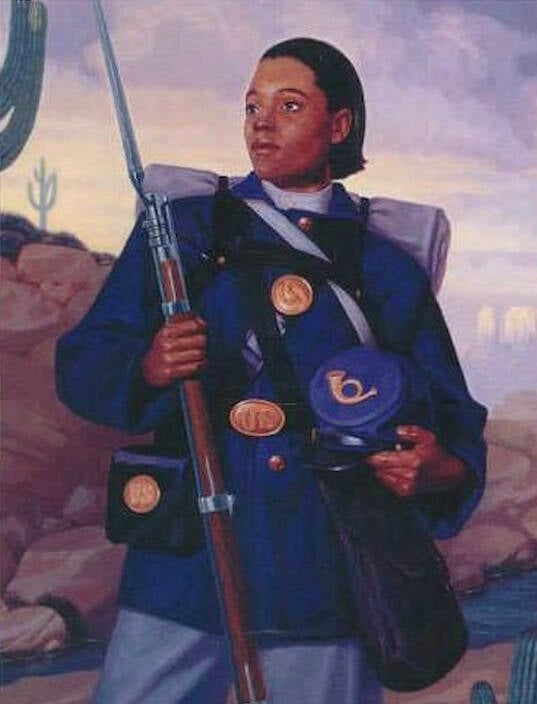 At the outbreak of the American Civil War in 1861, over 400 women disguised themselves in order to join in the fray. But 17-year-old Cathay Williams, a Black slave, was not one of them.

After Union soldiers freed her, Williams became a cook and washerwoman for their army. But she also became a spy and, for four years, went behind enemy lines deep in the Confederacy.

Her years with the Union Army inspired her to enlist in 1866, and this time, she did disguise herself. Using the name William Cathay, Williams became the only Black woman to serve as a Buffalo Soldier — and the first in U.S. history to enlist.

Who Was Cathay Williams?

Born in Independence, Missouri in 1844, Cathay Williams was not free – in spite of the fact that her father was a free man. Because her mother was enslaved, young Williams didn’t see a day of freedom in her childhood.

Instead, she became a house slave in a stretch of Missouri known as “Little Dixie.” By 1861, her mother had died and the Civil War broke out. Soon, Union soldiers occupied Jefferson City, where Cathay Williams lived.

The soldiers freed the slaves – but not entirely.

Union Army policy treated captured slaves as contraband in 1861. As a result, the Army forced enslaved people like Cathay Williams to take on jobs like cooking, washing laundry, and keeping the camp.

Colonel William P. Benton, the man in charge of the 13th Army Corps Union Soldiers, told Williams and the other freed slaves that they would travel deep into Confederate territory.

“I did not want to go,” Cathay Williams said frankly in an 1876 interview. But, she explained, “I had always been a house girl and did not know how to cook.” Traveling elsewhere seemed like the next best opportunity. 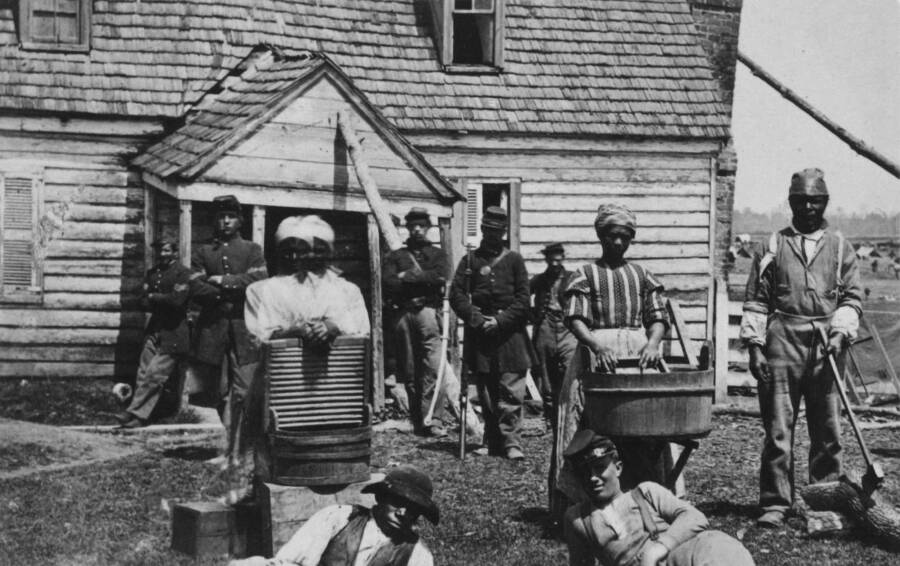 Matthew Brady/Buyenlarge/Getty ImagesFormer slaves working as washerwomen for the Union Army during the Civil War.

Until 1865, Williams served the Union Army. She traveled South, serving in Little Rock, New Orleans, and Shreveport. She also went to Savannah and Macon. During General Phillip Sheridan’s Shenandoah Valley campaign, Williams was there to wash dishes and cook.

“I saw the soldiers burn lots of cotton and was at Shreveport when the rebel gunboats were captured and burned on Red River,” Williams recalled. “At the time Gen. Sheridan made his raids in the Shenandoah Valley I was cook and washwoman for his staff.”

At the end of the war, Williams went back to Missouri as a free woman. But there were few options for freed Black women. “I wanted to make my own living and not be dependent on relations or friends,” Williams claimed.

A year later, she volunteered for the Army — undercover as a man.

Because the U.S. Army did not let women enlist in the 19th century, Williams simply adopted an alias: William Cathay.

Cathay joined the 39th U.S. Infantry Company A – an all-Black regiment that became known as the Buffalo Soldiers, thus becoming the first Black woman to serve in the U.S. Army. 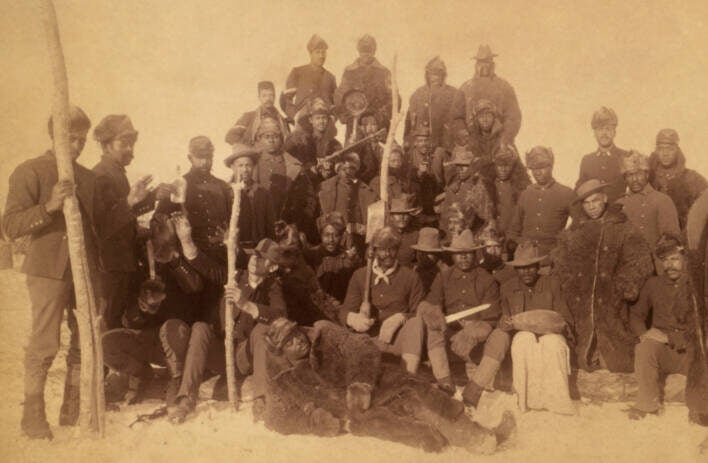 Library of CongressOne of the Buffalo Soldiers units in 1890.

But how did she keep her identity hidden for several years in the Army? Williams had help. Her cousin and a friend knew the truth and vowed to keep her secret. “Only two persons, a cousin and a particular friend, members of the regiment, knew that I was a woman,” She recalled. “They never ‘blowed’ on me.”

As one of the Buffalo Soldiers, Williams bravely went West to the frontier, which was little explored at the time.

Out west, Williams protected miners and settlers in New Mexico Territory. “I carried my musket and did guard and other duties while in the army,” and likely did not see combat.

During her time in the Army, Williams struggled with illness. She was hospitalized several times for smallpox and other ailments. And it was while being treated for one of these ailments that her secret was uncovered.

Williams’ commanding officer could have kicked her out and sent her to a mental health facility like so many other women who had dressed themselves as men. Instead, Captain Charles E. Clarke granted Williams an honorable discharge in 1868. 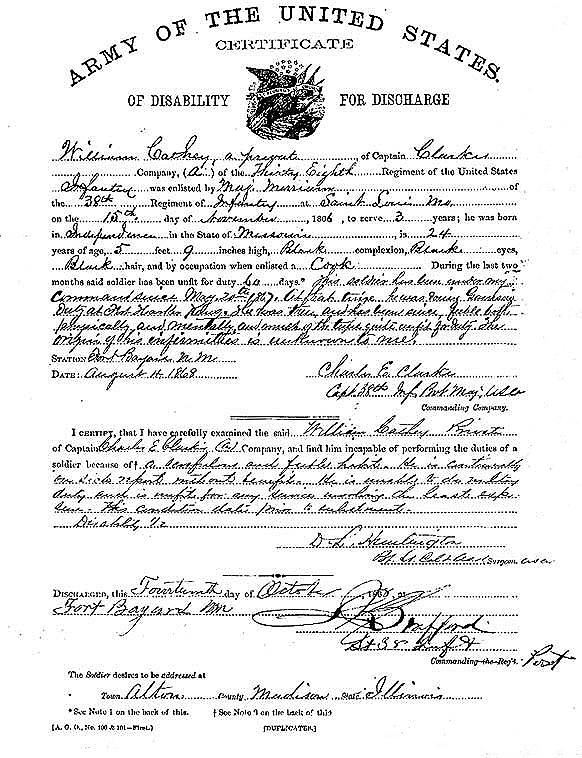 Williams received discharge papers that offered her some protection, and the surgeon who filled out her certificate reported that she was “continually on sick report without benefit. He is unable to do military duty … This condition dates prior to enlistment.”

As for her fellow soldiers, they turned on Williams. “The men all wanted to get rid of me after they found out I was a woman. Some of them acted real bad to me.”

By her 25th birthday, Cathay Williams had been a house slave in Missouri, a washerwoman with the Union Army, and a Buffalo Soldier.

After her honorable discharge, Williams decided to stay in the West. She moved to Pueblo, Colorado where she married. “My husband was no account,” Williams told a reporter. “He stole my watch and chain, a hundred dollars in money, and my team of horses and wagon. I had him arrested and put in jail.”

Still, Cathay Williams had big dreams. “I expect to get rich yet,” she said in her mid-30s. Life in the territories seemed to suit her. She declared, “I shall never live in the states again.”

Williams vanished from historical records until around 1890, when she petitioned the U.S. government for a disability pension. In spite of the fact that she had documented illnesses, including the loss of all her toes, Williams did not receive a pension. 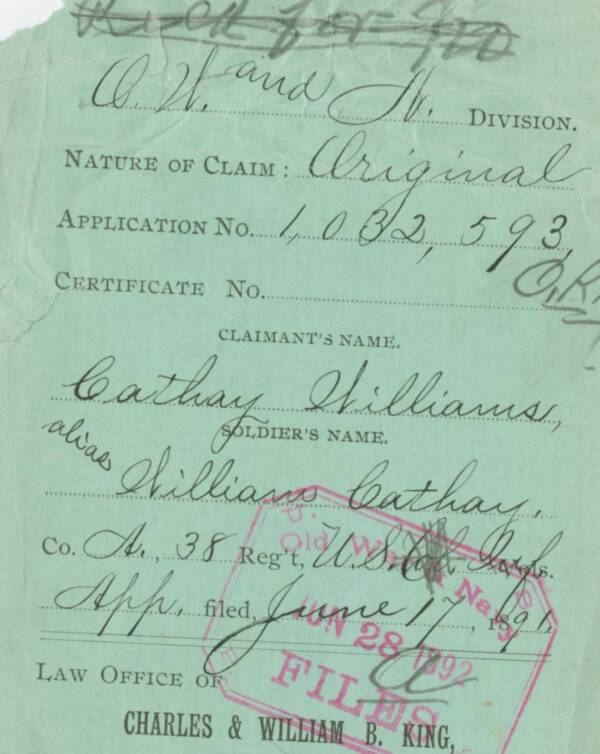 National ArchivesCathay Williams’s application for a pension, which was denied.

For years, history forgot Cathay Williams. No one knows when she died, and until recently, few had ever heard of the former enslaved woman who fought with the Buffalo Soldiers.

Today, Cathay Williams holds the title of the first Black woman to serve in the U.S. Armed Forces.

Cathay Williams was not the only woman to fight for the U.S. disguised as a man. Learn about Revolutionary War veteran Deborah Sampson, and then read about Mary Edwards Walker, the Civil War surgeon who fought for a medal of honor.