A morning whiskey "mouthwash," a bottle of champagne at lunch, drink-offs with President Roosevelt. All in a day's work for U.K. Prime Minister Winston Churchill. 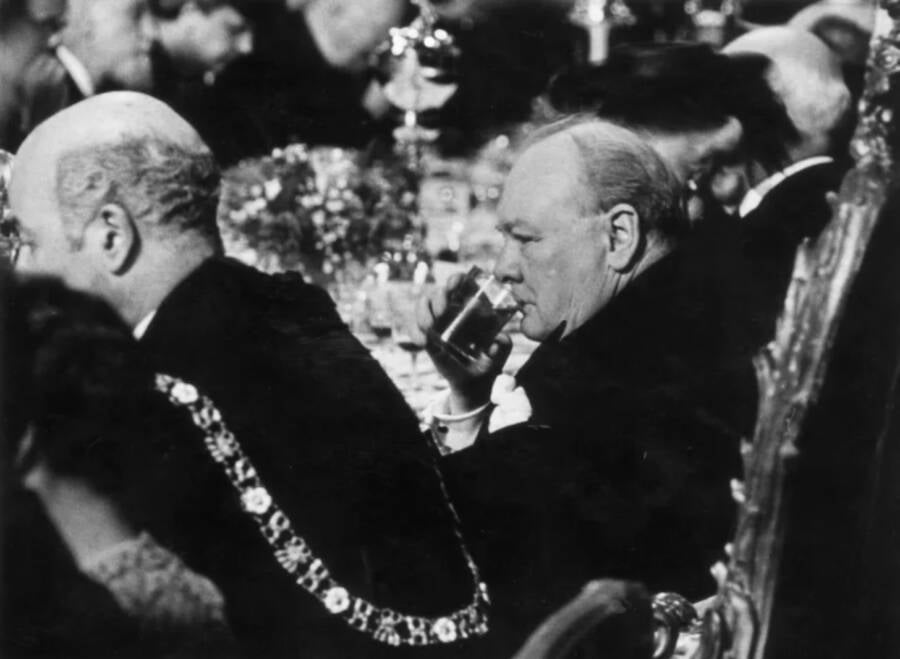 Fox Photos/Getty ImagesWinston Churchill drinking at a luncheon with the Lord Mayor at the Mansion House in the City of London.

Winston’s Churchill’s achievements as prime minister of the U.K are hard to match. If you think about what you’ve accomplished versus what Churchill had, you may find yourself in a hole of despair. You may just want to reach for that bottle of beer or glass of whiskey to numb you from your lack of accomplishments.

Unfortunately, in doing so you’ll only be furthering those feelings of inferiority. You see, Winston Churchill was also a boozer, a sot, a lover of alcohol and he could definitely outdrink you.

Churchill’s unquenchable thirst for alcohol wasn’t exactly a secret. White House staffers in Franklin Roosevelt’s administration had a special term when Churchill came for a visit: “Winston Hours.” Basically, during this time the president and prime minister would get three sheets to the wind. Supposedly, Roosevelt needed to sleep for 10 hours a night for three nights to recover from “Winston Hours.”

Churchill’s affinity for drinking dated back to when he was a 25-year-old correspondent covering the Boer War for the Morning Post in 1899. When he was sent out to the front line, he took 36 bottles of wine, 18 bottles of aged scotch, and six bottles of vintage brandy with him.

He was once quoted as saying, “When I was younger I made it a rule never to take strong drink before lunch. It is now my rule never to do so before breakfast.”

His cabinets were always stocked with whiskey, claret, and port. In 1936, Churchill reportedly had a tab with his wine merchant that was today’s equivalent of $75,000.

When he became prime minister in 1940, Churchill refused to moderate his drinking. He admitted that he had a reliance on alcohol, but made no attempts to quit. Lunch and dinner were accompanied by brandy and champagne, and he always had a glass of whiskey by his side. 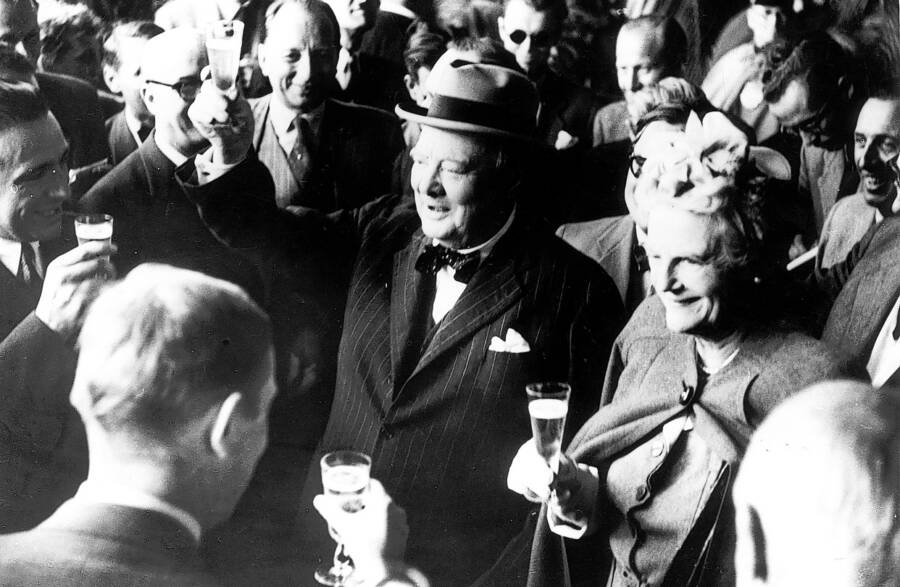 Getty ImagesWinston Churchill raises a glass alongside his wife Clementine in Switzerland.

It’s hard to pin down exactly how much Churchill drank. One estimate placed his consumption of Pol Roger champagne at 42,000 bottles during his lifetime.

The truth blurred with rumors in regards to the extent of his excess. It was Churchill’s impression that Europeans appreciated a leader who could hold his liquor, so he did little to quell the rumors anyway.

According to Churchill’s private secretary Jock Colville, he’d kick off his day with a “daily whiskey mouthwash.” From there, once the drinking started, it rolled on.

How Winston Churchill’s Drinking Never Interfered With His Wit

Giving great speeches was one of Churchill’s most notable traits. His speech “Blood, Toil, Tears, and Sweat” was his first speech as prime minister. His “We Shall Fight on the Beaches” speech at Dunkirk is lamented for its inspiring message. But Churchill’s stirring oratory wasn’t limited to moments of major historical significance. He had a natural wit.

Combining this wicked sense of humor with his penchant for booze, he once said “When I was a young subaltern in the South African War, the water was not fit to drink. To make it palatable we had to add whiskey. By diligent effort, I learned to like it.”

Not one to let his drinking get in the way of his quick tongue, Churchill’s intoxication actually enhanced his ability at times. One of the most notable anecdotes is a story that revolves around a woman accusing Churchill of being – what else – hammered. The woman in question is unclear, but some believe it was the Conservative Lady Astor.

As the story goes, she made the remark, “You, Mr Churchill, are drunk.”

Whether you choose to take the story as truth or myth, there’s ample evidence showing that Sir Winston Churchill – the British Bulldog, the prolific writer, the famed politician – was also a bit of a boozehound.

If you liked reading this story, you might also want to check out these presidents who liked to party. Then, check out these 25 shocking and inspiring Winston Churchill quotes.