Inside The Mysteries Of Gobekli Tepe, The Oldest Temple In The World

Built 11,000 to 12,000 years ago in modern-day Turkey, Gobekli Tepe predated writing, metal tools, and even pottery.

Other archaeologists had dismissed the site, but not Klaus Schmidt. When he came to Gobekli Tepe in 1994, he suspected that the unassuming hill hid an ancient secret. And he was absolutely correct.

Soon after Schmidt arrived at the site in southeastern Turkey, he uncovered a stunning, sprawling temple. This alone was an archaeologist’s dream come true — but Gobekli Tepe was more than just ancient ruins. 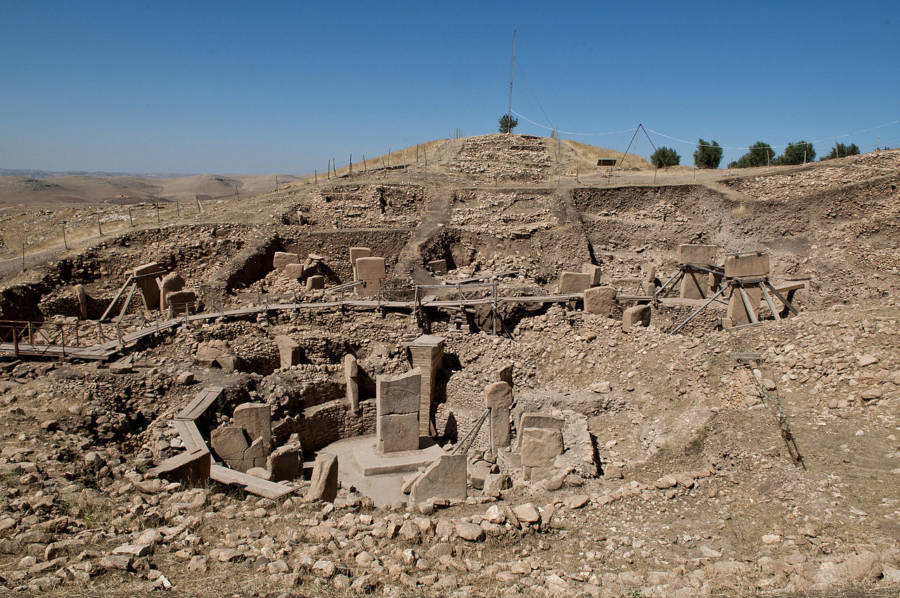 Wikimedia CommonsBuilt by hunter-gatherers during the Neolithic era, Gobekli Tepe is believed to be the oldest temple in the world.

Now believed to be the oldest temple in the world, its mere existence suggests that religion came before agriculture — and not the other way around — upending what scholars thought they knew about human history.

“Gobekli changes everything,” raved Ian Hodder, an anthropologist at Stanford University. “It’s elaborate, it’s complex, and it is pre-agricultural. That fact alone makes the site one of the most important archaeological finds in a very long time.”

But although Gobekli Tepe promises new answers about the course of history, it also holds some bizarre mysteries that have yet to be solved.

The Discovery Of Gobekli Tepe 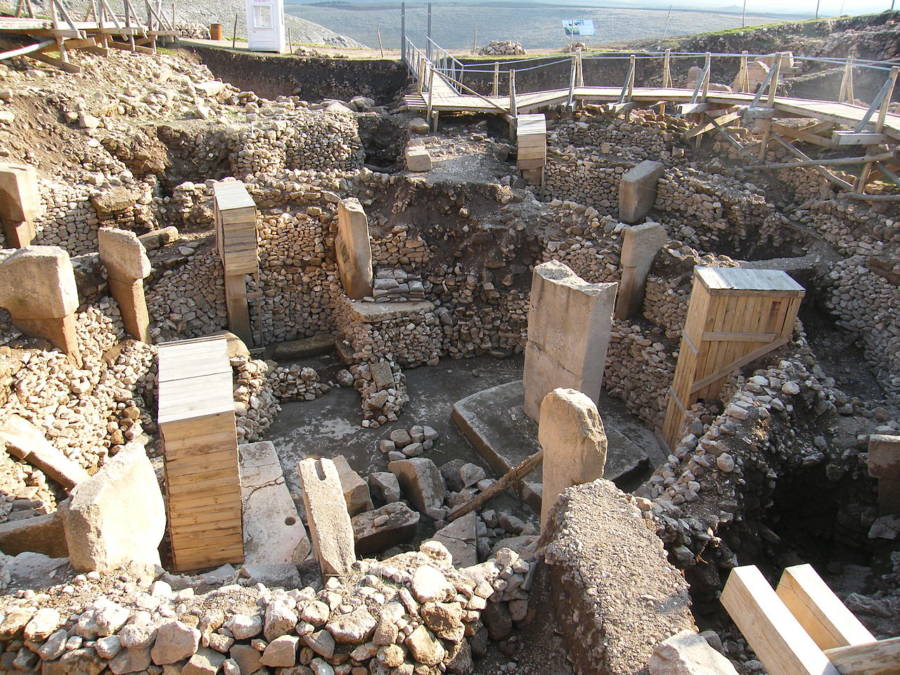 When archaeologists first came across Gobekli Tepe in the 1960s, they dismissed it as nothing more than a Medieval graveyard. The hill — its name means “belly hill” in Turkish — contained broken slabs of limestone. And so many experts simply assumed that these slabs were gravestones.

But German archaeologist Klaus Schmidt saw something different. When he heard about the hill, he decided to see it for himself. And when Schmidt arrived at Gobekli Tepe, he believed that the hill looked manmade. He felt certain that “only man could have created something like this.”

As he said later: “Within a minute of first seeing it, I knew I had two choices. Go away and tell nobody, or spend the rest of my life working here.” 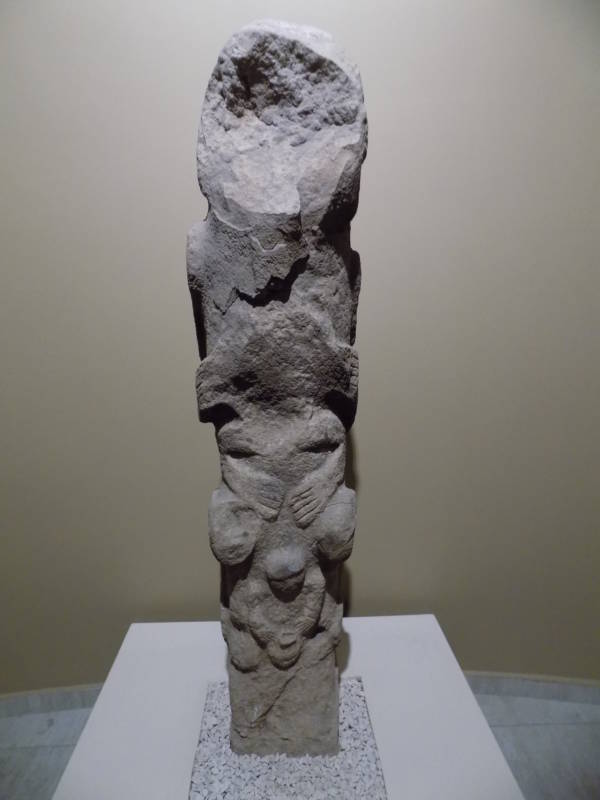 Schmidt decided to stay. Doing so quickly proved worthwhile. Just a year later, Schmidt and his team uncovered megaliths buried in the ground and pillars arranged in circles. Thrillingly, some of the pillars boasted complex carvings of beasts like lions, snakes, and scorpions.

Even more exciting, it was soon discovered that the site was between 11,000 and 12,000 years old. Putting this into perspective, Gobekli Tepe existed thousands of years before Stonehenge and the oldest-known human writing.

And Schmidt believed that his discovery had another special significance. “[Gobekli Tepe] is the first human-built holy place,” he declared. But how was Schmidt so certain that he’d uncovered the oldest temple in the world? 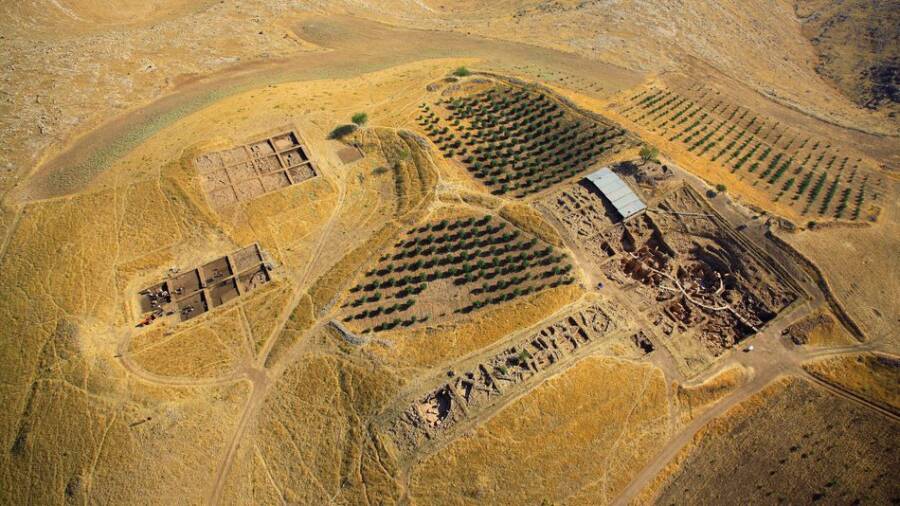 Schmidt and his team are certain Gobekli Tepe was a temple for several reasons. Part of their certainty comes from what they didn’t find at the site — cooking hearths, houses, or trash pits. In other words, it doesn’t appear that ancient humans used Gobekli Tepe as a settlement.

Plus, the site was first built before people were known to domesticate animals or plant crops — making it a pre-agricultural place. A study of the animal bones found at the site revealed a massive array of wild species, including boar, sheep, vultures, and ducks, that once roamed the area.

“The first year, we went through 15,000 pieces of animal bone, all of them wild,” said Joris Peters, an archaeozoologist from the Ludwig Maximilian University in Munich. These finds further suggest that Gobekli Tepe wasn’t a settlement — since people who gathered there apparently killed whatever wild animal they could get their hands on.

“It was pretty clear we were dealing with a hunter-gatherer site,” Peters said. 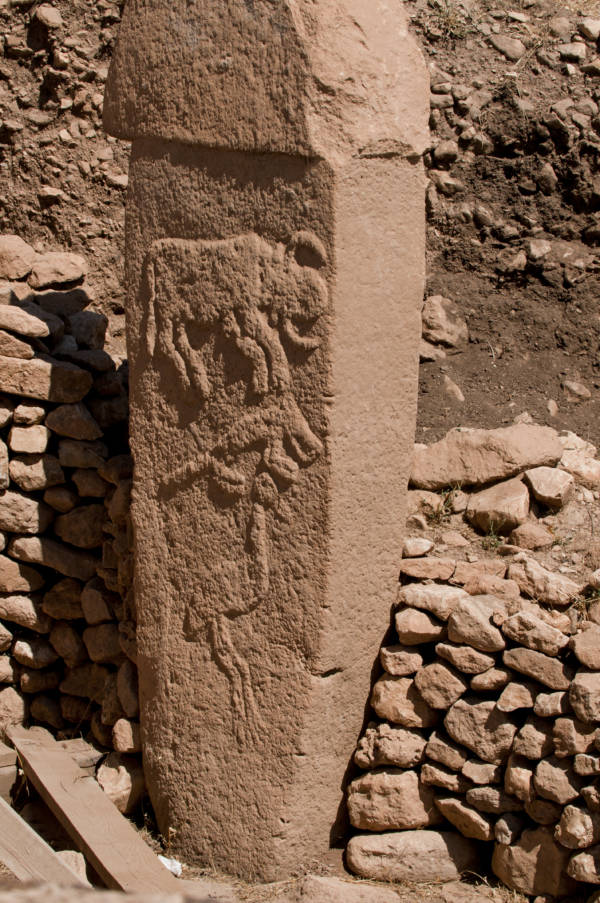 In addition, archaeologists found numerous carvings at Gobekli Tepe — which might represent early ideas about religion.

“I think [at Gobekli Tepe] we are face to face with the earliest representation of gods,” Schmidt said. “[The carvings] have no eyes, no mouths, no faces. But they have arms and they have hands. They are makers.”

“In my opinion, the people who carved them were asking themselves the biggest questions of all. What is this universe? Why are we here?” 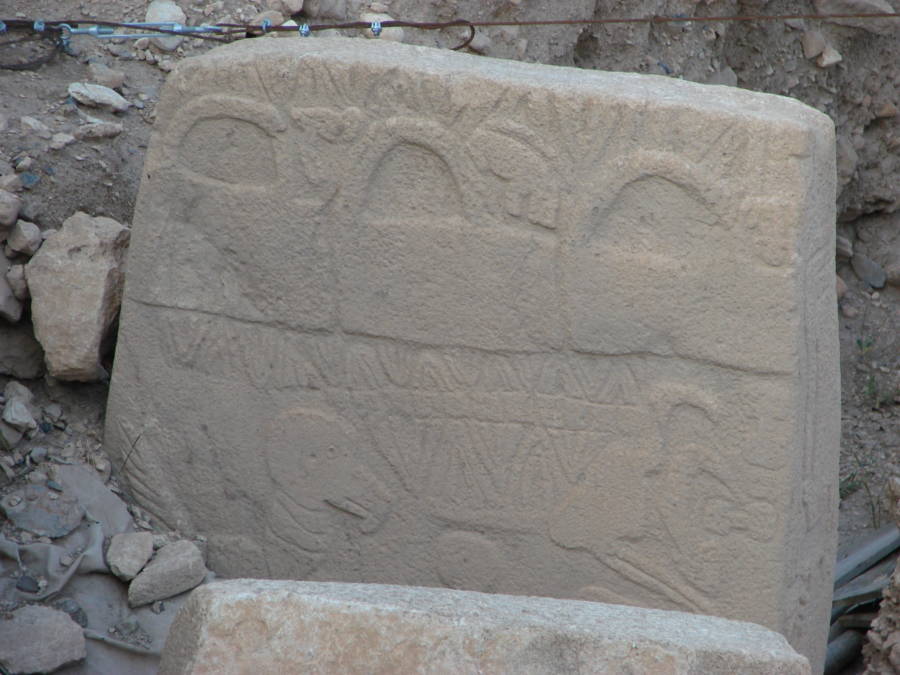 Wikimedia CommonsA close-up of one of the pillars, depicting what’s believed to be an image of an ancient god. June 12, 2011.

Archaeologists believe that people may have come from a long distance to try and answer those questions. Schmidt thinks that the temple might have even attracted hunter-gatherers from Africa and the Levant.

“It’s a landmark,” agreed Jens Notroff, an archaeologist who works at Gobekli Tepe. “Back then people would have to meet regularly to keep the gene pool fresh and exchange information… It’s no accident they gathered there.”

But it’s the temple’s age that makes it so significant. If Gobekli Tepe is the oldest temple in the world, then that means that humans must have gotten some things wrong about their own history. 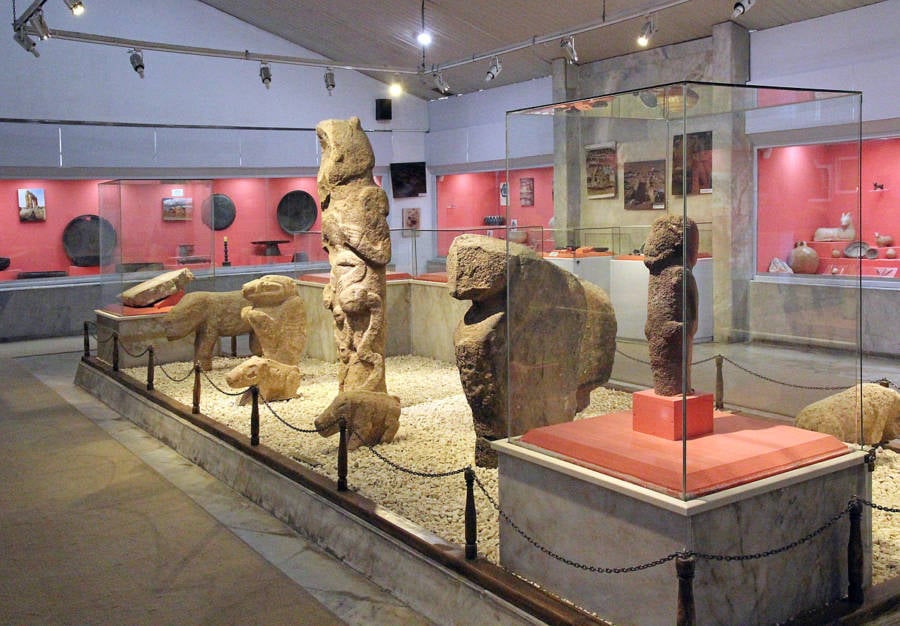 Wikimedia CommonsSculptures from Gobekli Tepe on display in a museum in Urfa, Turkey. May 13, 2012.

For a long time, many scholars believed that the development of organized religion came after the development of agriculture. They assumed that people only began constructing temples and other places of worship after they shed their hunter-gatherer ways. But the discovery of Gobekli Tepe raised some serious questions about that theory.

After all, people did not settle at Gobekli Tepe. And they didn’t set up a farm there. Instead, they apparently came together as hunter-gatherers to build a temple. Assuming that’s the case, their pursuit of religion must have eventually led to settled societies — and the age of agriculture. That completely changed how scholars understood human history.

Schmidt, Hodder, and others suspect that it was the pursuit of something spiritual — and not a surplus of food, as long believed — that gave birth to civilization as we understand it today.

But what was that something spiritual? Looking back into the chasm of thousands of years, it can be difficult for modern eyes to understand.

“Trying to pick out symbolism from prehistoric context is an exercise in futility,” said Gary Rollefson, an archaeologist at Whitman College in Walla Walla, Washington.

Some archaeologists point to the carvings as possible clues. Maybe the people at Gobekli Tepe believed — like other ancient civilizations — that vultures brought humans to heaven, and thus carved the large birds into pillars to honor them. Or maybe, as Schmidt speculates, Gobekli Tepe was used as a final resting place for brave hunters.

But in 2017, archaeologists found a new clue — and got one step closer to solving some of the temple’s ancient mysteries.

The Discovery Of Carved Skulls At Gobekli Tepe 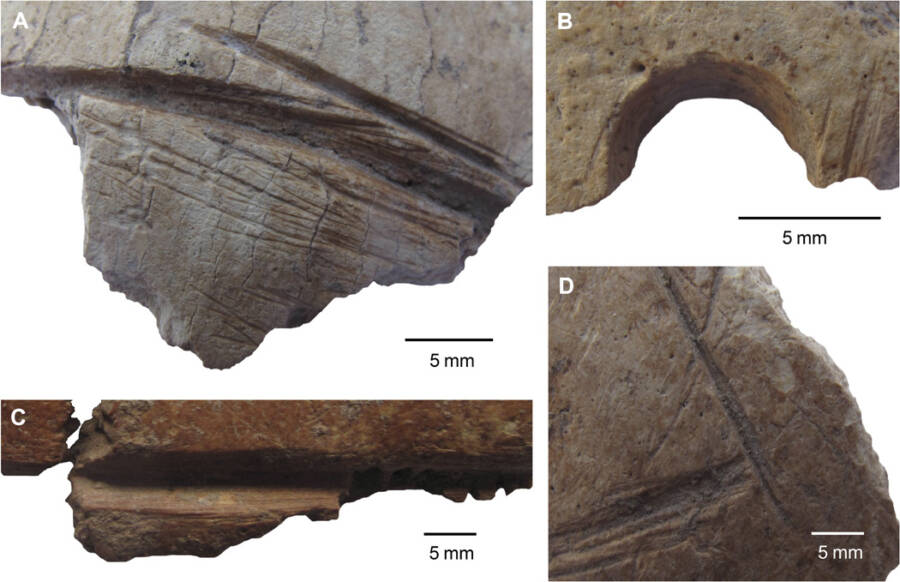 In 2017, archaeologists made a significant discovery at Gobekli Tepe: human skulls. Shockingly, some of these skulls were deliberately carved — with deep, straight grooves running front to back.

“The carvings are very deep lines in the bone and are definitely intended,” said Julia Gresky at the German Archaeological Institute in Berlin. “It’s the first evidence we have for carved human skulls anywhere.”

But what do the carved human skulls mean? Archaeologists aren’t sure, but some have noted the presence of skulls in the stonework at the temple. “This is completely new, and we don’t have a model to go on,” said Rollefson. “There seems to be a focus on ritual reuse after decapitation.” 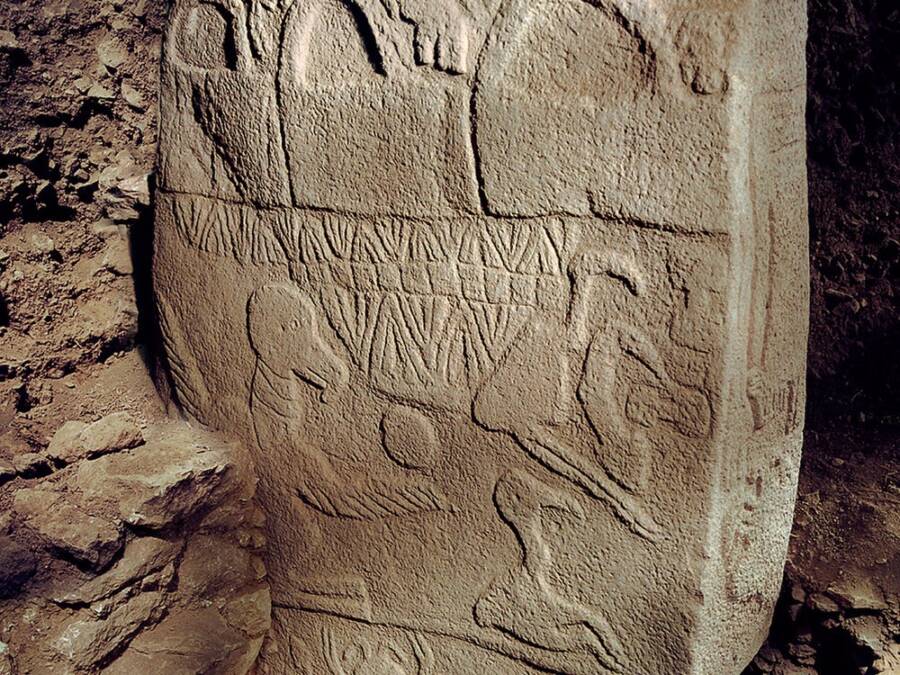 However, since some human skulls were found without any marks, archaeologists suspect that certain skulls were carved for a reason. “They are really special, these three individuals,” Gresky explained.

And Lee Clare, a scientist who has studied the skulls, speculated that they could represent Gobekli Tepe’s important place in human history. If hunter-gatherers came together to build the temple in the first place, then their focus on skulls could’ve helped strengthen their collective identity.

Some experts believe this may even be evidence of some type of “skull cult” at Gobekli Tepe — which displayed the decapitated skulls of “either venerated ancestors or dispatched enemies.”

Either way, the discovery of the skulls proves that there’s more to explore at the temple. The site suggests that religion predated agriculture, but what drew hunter-gatherers to build the temple in the first place? And why?

For now, researchers continue to search the world’s oldest temple for answers to history’s mysteries. Only time will tell what they uncover next.

After learning about Gobekli Tepe, the world’s oldest temple, read about other archaeological discoveries that changed history. Then, take a look at the 14,000-year-old settlement found in Canada.