The Remarkable Story Of ‘Amazing Grace’ Hopper, One Of The First Modern Programmers

One of the minds behind the first electromechanical computer, Grace Hopper also pioneered a computer language that revolutionized the future of programming — which is still in use today.

During her time in the United States Navy, Grace Hopper made an astounding number of technological contributions. Ironically, she only did so after being deemed unfit to serve due to her age and weight. Hopper resourcefully found a way to enlist, anyway, and worked to advance computers that changed history forever.

A resilient New Yorker, Hopper studied math and physics at Vassar College before getting a master’s degree in the former from Yale University. She didn’t stop there and became one of the first women to earn a Ph.D. in that field in 1934. When World War II broke out, she leaped all hurdles preventing her from joining in the fight. 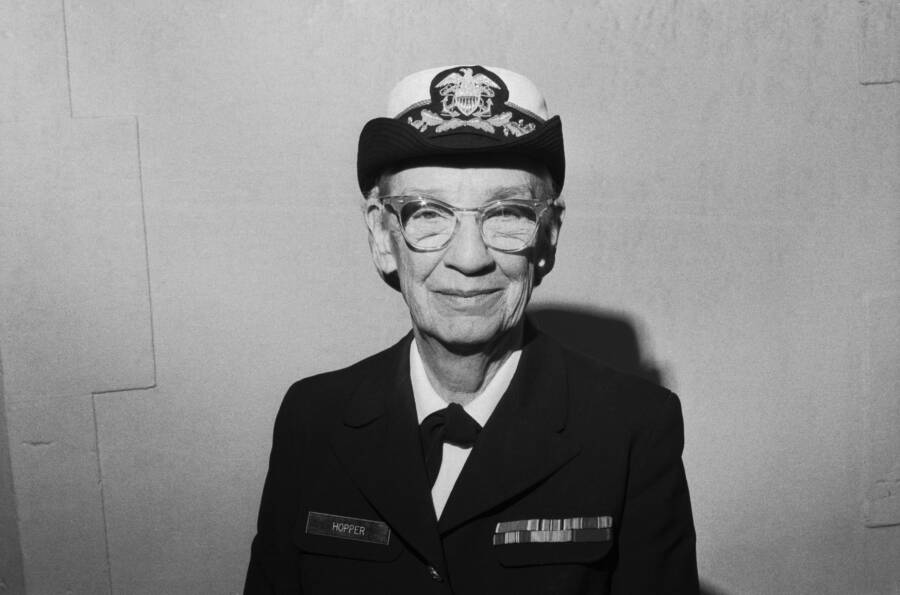 Bettmann/Getty ImagesGrace Hopper was once the oldest serving officer in the armed forces.

While she was commissioned as a lieutenant, Hopper’s intellect was too invaluable to be jeopardized in the field. She was thus assigned to the Bureau of Ordnance Computation Project at Harvard University where she created the first computer language compiler in history — with the resulting technology still in use today.

Grace Hopper’s legacy is one of untold fortitude and intelligence. She helped advance vital technologies well into old age and only retired from the Navy at 79 years of age. She had braved the Great Depression and pioneered women’s contributions to the war effort. In 1996, she even had a Navy ship named in her honor.

The Early Life Of Grace Hopper

Born Grace Brewster Murray on December 9, 1906, in New York City, Hopper was the eldest of three siblings. Her father Walter Fletcher had his own insurance company, while her mother Mary Campbell Van Horne was a loving housewife. Her great-grandfather, meanwhile, had fought in the Battle of Mobile Bay in the Civil War.

Hopper had a curious mind at a young age. She was only seven years old when she took apart an alarm clock merely to learn how it worked. While she was certainly as mischievous as her peers, she also taught herself how to cross-stitch and needlepoint — and took piano lessons when she wasn’t voraciously reading. 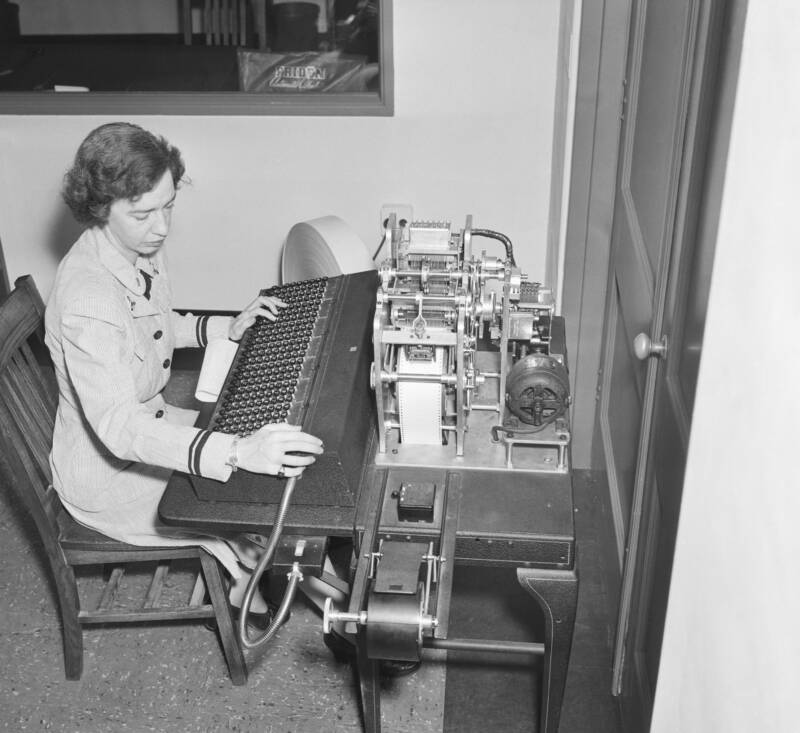 Bettmann/Getty ImagesHopper with a manual tape punch, or early computer.

Afraid he wouldn’t leave much of an inheritance, Walter Fletcher wanted his kids to be well educated. Math was considered a male gender role at the time, but the patriarch wanted his daughters to be as well-versed as his son. Hopper went to private schools in the city until her acceptance into Vassar in 1923. She was 17.

Hopper graduated Phi Beta Kappa in 1928 with degrees in math and physics. She earned her master’s from Yale in 1930 and married New York University professor Vincent Foster Hopper. She had found herself in the middle of a boom where the number of women getting doctorates wouldn’t be equaled again until the 1980s.

Ultimately, Grace Hopper happily took a job teaching mathematics at Vassar in 1931. She was promoted to associate professor in 1941 and undoubtedly taught countless students how useful and important the field of math could truly be. When Japan bombed Pearl Harbor on December 7, 1941, however, her priorities changed.

Determined to join the war effort, Hopper tried to enlist in the U.S. Navy in 1942. She was rejected as her age of 35 and weight of 105 pounds deemed her too old and too light. She didn’t give up, however, and was given a waiver to join the U.S. Naval Reserve — and took a leave of absence from teaching to forge ahead. 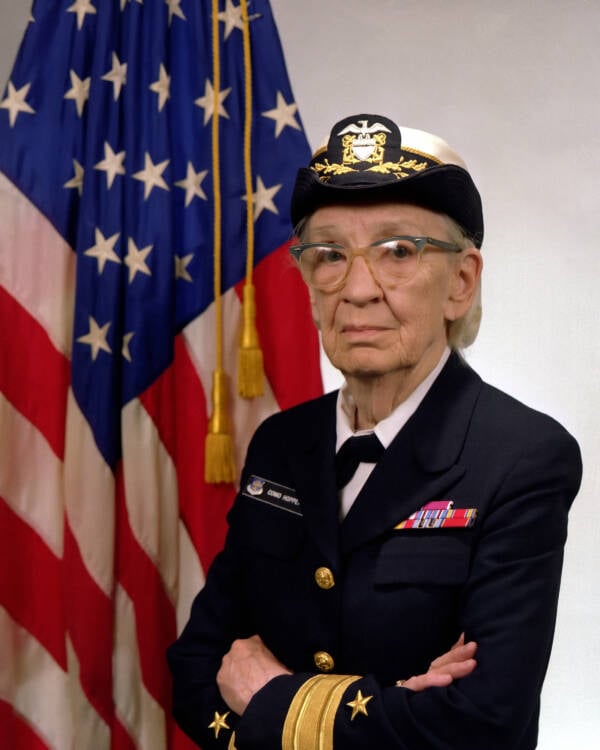 Hopper endured 60-day training at the Midshipmen’s School for Women at Smith College in Northampton, Massachusetts in December 1943. Now a lieutenant junior grade, Hopper was sent to Harvard after officials recognized her mathematical proficiency as a tool that they could use in the fight against Axis powers.

Assigned to the Bureau of Ships Computation Project, Hopper reported to physicist Howard Aiken who had developed the MARK I electromechanical computer. The machine was designed to make mathematical calculations and was programmed using punched paper tape loops which translated into commands.

The Navy wanted to use the computer to compute firing tables, which contained data that the military needed to accurately fire ballistic weapons. Aiken gave Hopper a codebook and demanded that she use it to learn how to program the computer within a week — despite her being a mathematician and not a programmer.

Remarkably, Hopper not only mastered the MARK I but refined it to be more efficient. Since each of the computer’s programs were written from scratch which required a lot of time, Hopper used notebooks to write down bits of code that could be reused when needed. She called these bits of code “subroutines.” 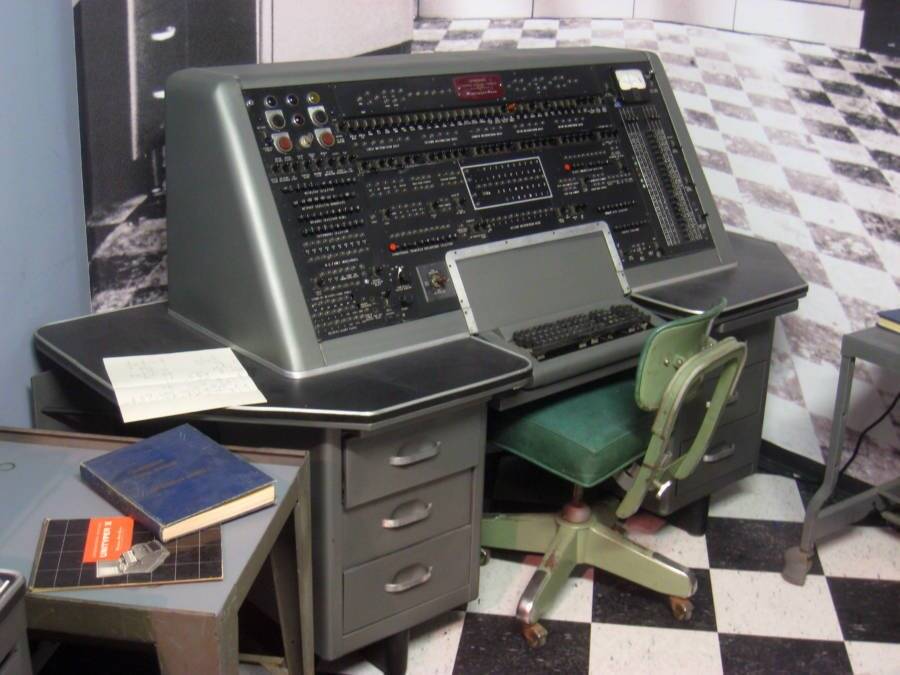 Hopper not only made the computer more intuitive to use but also more capable of computing firing tables at a far faster pace. The navy had been employing 100 women with calculators at a research lab to compute firing tables until Hopper’s programming allowed the navy to abandon this slow effort in favor of the MARK I.

Hopper’s relentless work didn’t end when the war did — and only became more sophisticated.

Her Work In The Post-War Period

Though she was offered a full professorship at Vassar following the war, Hopper declined and continued to work on the MARK II and MARK III computers from 1946 to 1949. She left Harvard, as there were no permanent positions there for women, and joined the Eckert-Mauchly Computer Corporation in Philadelphia, instead.

After helping them develop the UNIVAC (Universal Automatic Computer), or the first computer capable of translating numbers into letters, Hopper developed the first compiler. Called A-0, it translated mathematical code into commands that a computer could understand.

Perhaps most notable, Hopper toiled on the idea of writing computer programs with words rather than symbols. Despite her proposal being rejected by superiors in 1953, she and her peers persisted. In 1956, Hopper’s team unveiled FLOW-MATIC, the first programming language that used word commands in place of numbers. 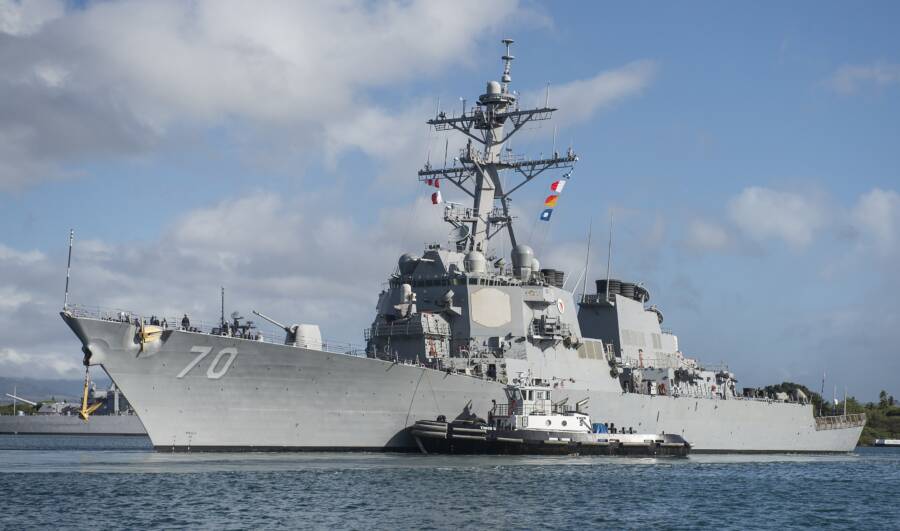 In 1959, Hopper participated in the Conference on Data Systems Languages which aimed to develop a computable business language that could be utilized across a variety of industries. This led to COBOL, or “common business language,” and it became the most adopted computer language on Earth by the 1970s.

Hopper retired from the Navy in 1985. Endearingly dubbed “Amazing Grace” by her superiors, she was the oldest serving officer in the armed forces. She received over 40 honorary degrees, taught at renowned universities, and was awarded the National Medal of Technology by President George H.W. Bush in 1991.

While she died on January 1, 1992, her contributions to the fields of computer programming and mathematics reverberate to this day. An inspiration to men and women alike, she motivated coders of all ilks to realize that the computers we deem sophisticated today are only “the Model-T” when compared to the cars of tomorrow.

After learning about Grace Hopper, read about six female Nobel prize winners who changed the world. Then, learn how the Soviets created a bomb that was too big to use in war.