The strength of Tsar Bomba was bigger than Hiroshima and Nagasaki combined — and wasn't even as strong as it could have been. 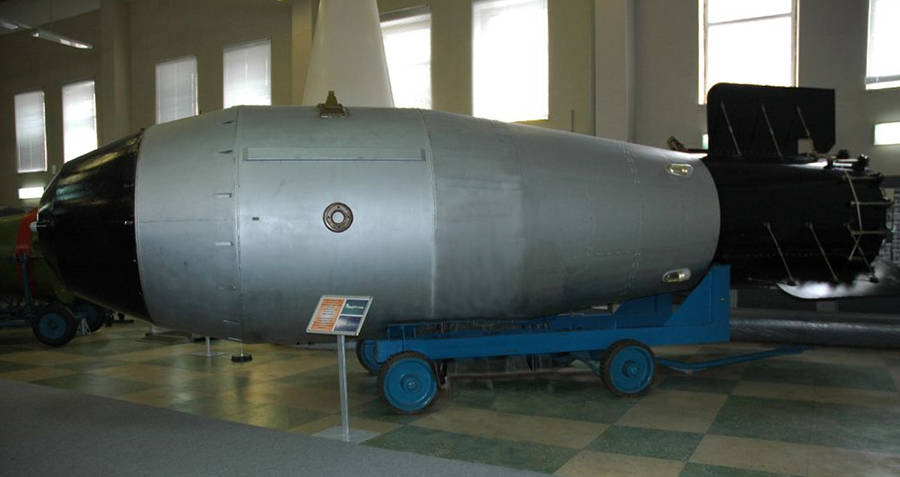 Wikimedia Commons
A recreation of the Tsar Bomba.

The idea was a simple one: create a nuclear bomb that could place the Soviet Union ahead of the United States in the nuclear arms race.

The goal was to scare the rest of the world into submission, to make them fear the might of the Soviet Union. But the reality of Tsar Bomba was much more devastating than anyone imagined.

Tsar Bomba was over 25 feet long and weighed almost 30 metric tons. It was similar in shape to the ‘Little Boy’ and ‘Fat Man’ bombs that the United States had used to devastate Hiroshima and Nagasaki fifteen years prior, but that was as far as the similarities went.

It was too big to fit inside even the largest of Soviet aircraft and would need to be specially mounted to one to be taken to its drop site.

The Tupolev, a large military aircraft designed to transport explosives, was selected to carry Tsar Bomba to its destination: the sparsely populated island of Novaya Zemlya, in the Barents Sea, north of Scandinavia and north-west of the USSR.

A modified Tu-16 bomber would fly beside the Tupolev, ready to monitor air samples and film the blast. To give the planes a chance to survive, the Tsar Bomba would be dropped from a parachute, which would drift down to a predetermined height before detonating. Hopefully, by then, the two planes would be almost 30 miles away, at which their chance of survival would be at its highest — a mere 50 percent.

All went according to plan until the bomb was dropped. 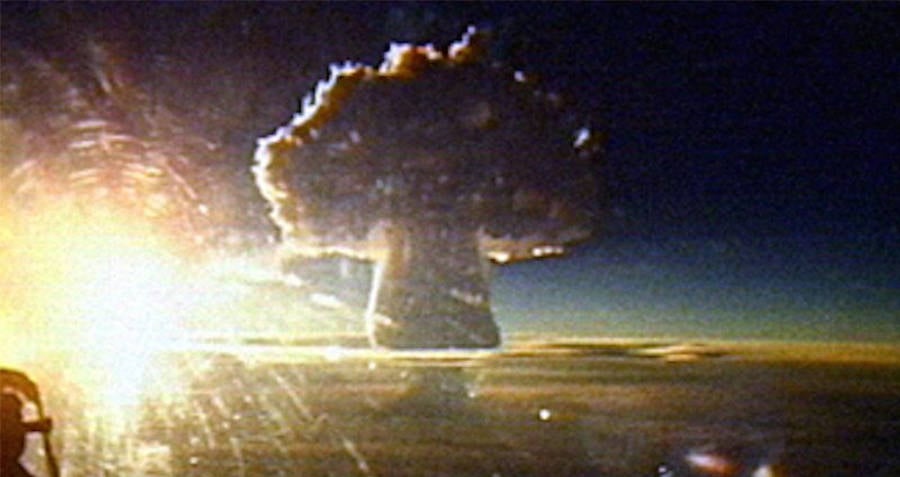 At 11:32 Moscow time, Tsar Bomba detonated, creating a fireball that was five miles wide and that could be seen from 630 miles away. The resulting mushroom cloud was 40 miles high, spreading 63 miles from end to end.

The energy released was equivalent to the detonation of 57 million tons of TNT, more than Hiroshima and Nagasaki combined, and ten times more powerful than all of the munitions expended during World War II combined. The blast wave orbited the earth three times.

The village of Severny on Novaya Zemlya, 34 miles from the blast site, was completely devastated. Even towns within a hundred miles of the blast felt the damage and reported houses collapsing, windows shattering, and roofs caving in from the detonation of history’s most powerful nuclear bomb. Radio communication was disrupted for more than an hour.

The Tupolev survived, but barely. The blast wave caused the giant plane to fall over 3,300 feet before the pilot was able to regain control.

The Soviet Union received international condemnation from the United States, Great Britain, and Sweden, and it was only after this that the truth was revealed. A small change in the design was added to tone down the damage Tsar Bomba would inflict — it was supposed to have been twice as powerful.

Despite the destruction it caused, there were a few positive things gleaned from the detonation. Due to the fireball detonating in the air, rather than making contact with Earth, there was a surprisingly low amount of radiation.

The architect behind the plan, Andrei Sakharov, even renounced all nuclear weapons and dedicated his life to ridding the world of them. He realized that, should a larger bomb be dropped, it wouldn’t be repelled from the earth by its own blast wave-like Tsar Bomba was, and would cause global devastation.

Enjoyed this look at the most powerful nuclear weapon in history, Tsar Bomba? Check out these pictures that show the fall of the Soviet Union. Then read about the guy who singlehandedly stopped World War III.