27 Facts That Reveal The Total Devastation Of World War II

Go inside the 20th century's most calamitous conflict, from Adolf Hitler's invasion of Poland to America's atomic bombings of Japan. 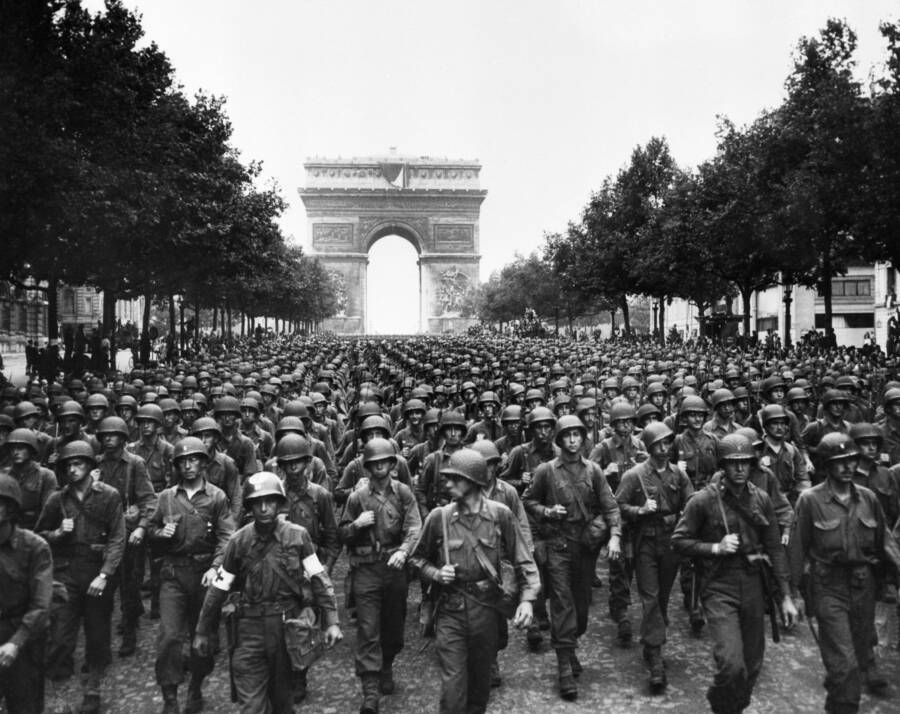 Bettmann/Getty ImagesAmerican troops march down the Champs-Élysées in Paris, France. 1944.

Today, most people know the basic facts of World War II. But the six-year conflict was far more complicated than many realize.

Below, read through 27 World War II facts that cover everything from how the war began, to who fought in it, to how it finally came to a bloody end.

When Was World War II?

Who Fought In World War II?

World War II was fought between the Axis powers and the Allied powers.

Who Were The Allies In World War II? 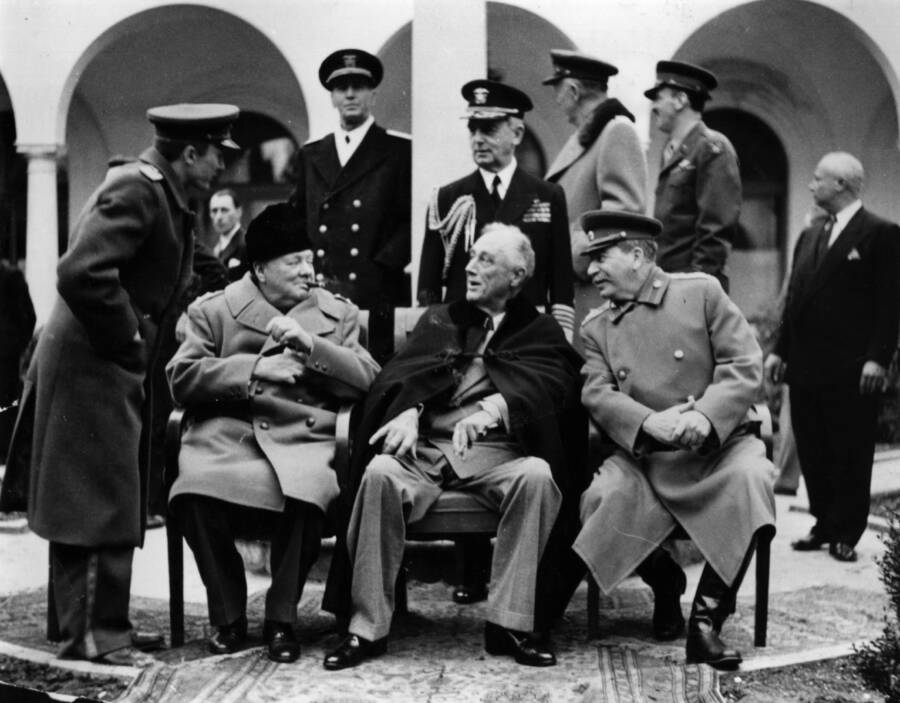 The main Allied powers during World War II were Britain, the United States, and the Soviet Union. They fought against the enemy Axis powers, which included the principal members Germany, Italy, and Japan.

But many more countries engaged in the conflict.

How Many Countries Were Involved In World War II?

World War II touched virtually every corner of the globe. According to the National World War II Museum, more than 50 countries fought in the armed conflict, deploying over 100 million troops throughout the battles.

When Did World War II Start?

How Did World War II Start?

World War II started when Nazi Germany, led by Adolf Hitler, invaded Poland. On September 3rd, two days after the invasion, Poland’s allies France and Britain declared war on Germany, and the conflict escalated from there.

However, the stage for the Pacific front of World War II was already set — as Germany’s ally Japan had invaded China on July 7, 1937.

World War II was started by Germany. Hitler, resentful of land that Germany had lost after its defeat in World War I, was determined to regain territory.

By 1939, the Führer had already annexed the largely German-speaking Sudetenland in Czechoslovakia, after the British — believing it would “appease” him and avert a future conflict — agreed to let him do so.

Why Did World War II Start?

A number of historical factors led to World War II. Germany’s defeat in World War I and the punishing Treaty of Versailles sowed resentment among many Germans. This, and the economic downturn of the 1930s, paved the way for the rise of Adolf Hitler — who often blamed Jews for Germany’s problems.

At the same time, Japan had begun to build its large empire in the Pacific. Throughout the 1930s, Japanese forces were increasingly aggressive toward China, culminating with the Japanese invasion of the country in 1937.

(As the conflict dragged on, Japan would go on to commit numerous war crimes, including forcing over 200,000 girls and women into sexual slavery, conducting experiments on kidnapped Chinese civilians, and regularly executing — and sometimes even cannibalizing — their prisoners of war.) 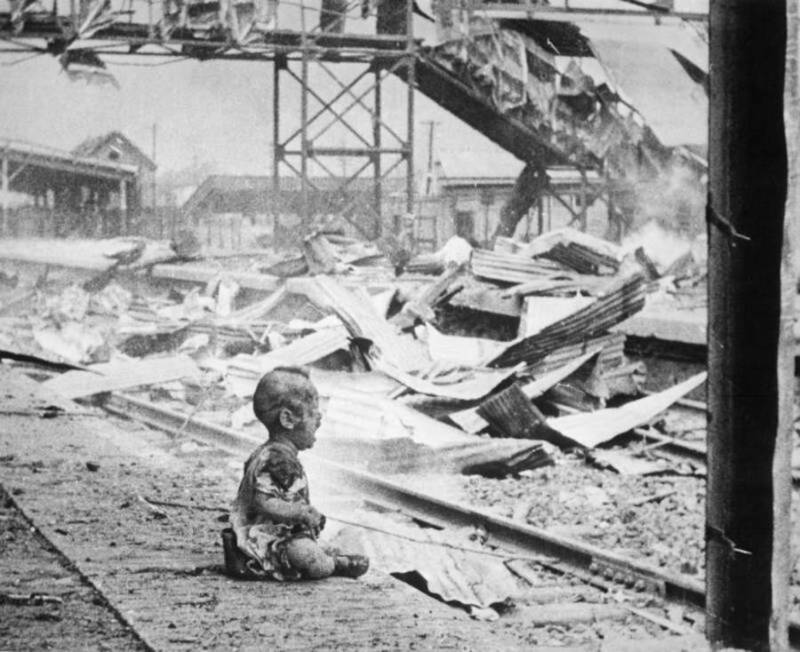 H.S. Wong/Wikimedia CommonsA young child cries amidst the rubble of a destroyed train station in Shanghai, China, in 1937.

And, just as in World War I, varying alliances bound many countries together. Germany and Japan had signed an Anti-Comintern Pact in 1936, which Italy joined in 1937, laying the foundation for the Axis powers. Likewise, France and Britain promised to protect Poland shortly before Germany invaded in 1939.

When Did The U.S. Enter World War II?

The United States entered World War II at the end of 1941, following the Japanese attacks on an American naval base at Pearl Harbor in Hawaii.

Though the United States had previously supported the Allies with the Lend-Lease Act — which allowed President Franklin Roosevelt to direct everything from ammunition to airplanes to food to the European war effort — it took the bombing of Pearl Harbor for the U.S. to officially join the conflict.

When Was Pearl Harbor? 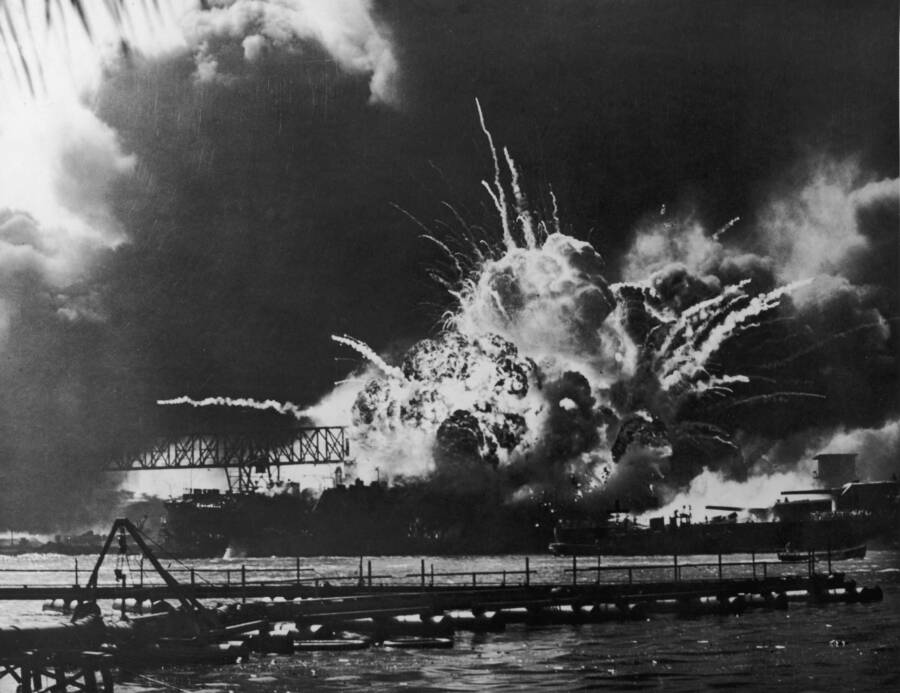 Lawrence Thornton/Getty ImagesThe U.S.S. Shaw explodes at Pearl Harbor in Hawaii after the Japanese attack in 1941.

The Japanese bombed Pearl Harbor on December 7, 1941, a day that President Roosevelt avowed would “live in infamy.” The attack destroyed or damaged 20 ships, killed 2,400 Americans, and injured 1,000 more.

Why Did Japan Attack Pearl Harbor?

Tensions between the United States and Japan had been building for quite some time. Throughout the 1930s, Japan expanded its empire and ratcheted up its aggression toward China. In response, the United States levied a number of sanctions against Japan and offered support to China.

But Japan was especially enraged when the United States froze Japanese assets and set up an oil embargo in mid-1941. At that point, the Japanese decided to bomb Pearl Harbor. They figured that doing so would wipe out the U.S. Pacific Fleet, clearing the way for Japanese imperial expansion.

The attack was a surprise — even to Japan’s allies. According to Time, Adolf Hitler was ecstatic when he heard the news, believing that the Americans and the British would be forced to focus on the conflict in the East.

Who Did The U.S. Fight In World War II?

The U.S. fought against the Axis powers: Germany, Italy, and Japan. But even though the attack on Pearl Harbor had led the U.S. to join the war, another kind of atrocity was taking place in Europe — the Holocaust.

What Was The Holocaust?

The Holocaust was the systematic mass murder and persecution of European Jews, a policy plotted and enforced by the Nazis and their allies.

When Did The Holocaust Start? 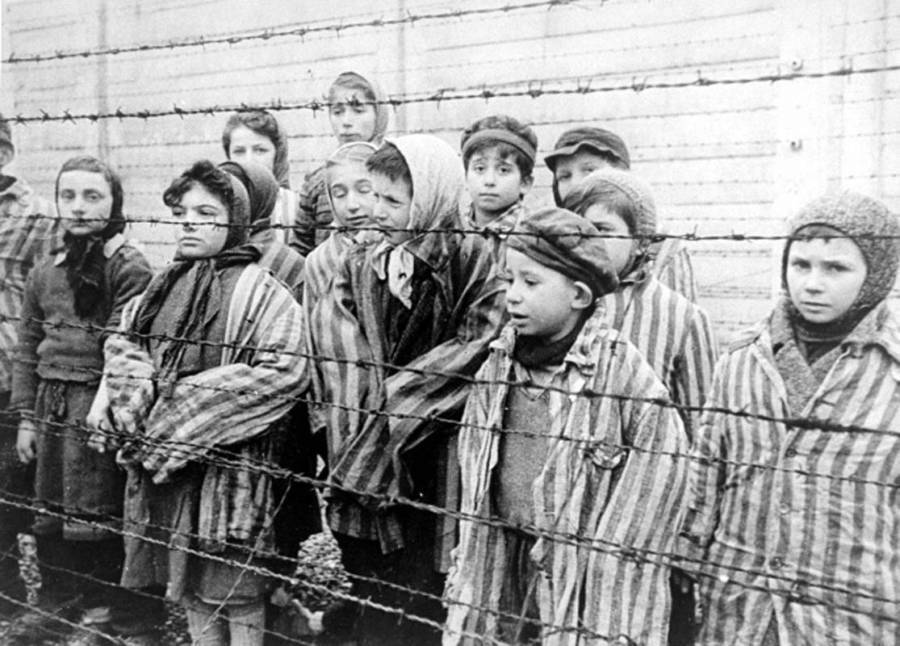 United States Holocaust Memorial Museum/Belarusian State Archive of Documentary Film and Photography via Wikimedia CommonsSurvivors at the Auschwitz concentration camp, pictured after their liberation by Soviet forces in January 1945.

According to the United States Holocaust Memorial Museum, the Holocaust began in 1933 when Adolf Hitler rose to power in Germany. Almost immediately, Hitler and the Nazi Party began to persecute Germany’s Jews.

At first, Nazi officials believed that they could solve their “Jewish Question” by classifying Jews as second-class citizens in Germany or forcing Jewish people to leave the country and emigrate to different places. But as World War II escalated, they abandoned these plans. Instead, Nazis adopted the “Final Solution” in 1941 and began to murder Jews en masse.

Where Did The Holocaust Take Place?

After starting in Germany, the Holocaust spread across all Nazi-occupied territories, where Jews faced persecution, deportation, and death.

Some people who lived in Nazi-held territory, like the Netherlands’ Corrie ten Boom and Poland’s Irena Sendler, nevertheless did whatever they could to protect their Jewish friends, neighbors, and acquaintances.

How Many People Died In The Holocaust?

According to the United States Holocaust Memorial Museum, the Nazis and their collaborators killed six million Jews — or nearly two-thirds of the Jewish people who were living in Europe at the time.

They also murdered millions of people who belonged to other minority groups, including members of Jehovah’s Witnesses, Romani people, gay people, and people with physical and mental disabilities.

When Did The Holocaust End?

The Holocaust finally came to an end in May 1945, as Nazi Germany completely collapsed. Allied troops had already begun to liberate people who were imprisoned at concentration camps as early as mid-1944, and they continued to free any survivors they found at other death camps throughout the final months of the war on the Western Front.

How did the war get to that point? The liberation of the camps, the defeat of Nazi Germany, and the suicide of Adolf Hitler all followed an important Allied victory in France in June 1944 — which was famously dubbed D-Day. 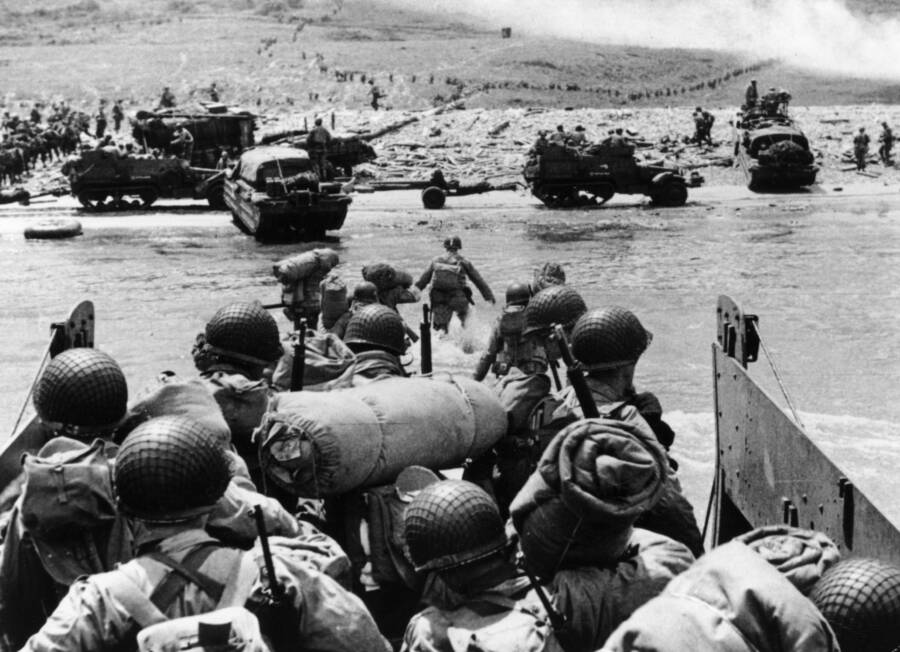 D-Day was an amphibious invasion of the Normandy region of Nazi-occupied France by over 156,000 U.S., British, and Canadian troops. Among their ranks were future Star Trek actor James Doohan and the men of Easy Company.

Some 4,000 Allied troops lost their lives, and over 225,000 service members perished in the subsequent Battle of Normandy. But D-Day ultimately proved to be a turning point in the global conflict. The Allied victory there heralded the beginning of the end of the war in Europe.

That said, it should be noted that earlier battles that the Nazis fought against the Soviets also played a significant role in Germany’s defeat. In fact, about 80 percent of German military deaths occurred fighting against the Soviets. And Hitler’s invasion of the Soviet Union in 1941 has been cited as one of his biggest mistakes during the war. The ensuing Battle of Moscow and the later Battle of Stalingrad — both of which ended in Soviet victories — undoubtedly turned the tide in favor of the Allied powers before D-Day.

But as the fighting finally came to a close in Europe, it was a different story in Asia. In the Pacific, Japan vowed to fight on — until the United States became the first country to utilize an atomic bomb.

When Was The Atomic Bomb Dropped?

How Many People Died In Hiroshima And Nagasaki?

An estimated 80,000 people died in Hiroshima, and 40,000 died in Nagasaki after the atomic bombings. Tens of thousands more perished in the following weeks from radiation exposure and other injuries.

When Did World War II End?

However, a handful of holdouts in the Japanese Army refused to believe that the war was really over — despite receiving leaflets that explained Japan’s surrender — and continued “fighting” in the jungles of places like Indonesia and the Philippines for years. Shockingly, some soldiers (like Hiroo Onoda and Teruo Nakamura) remained at their posts until the 1970s. 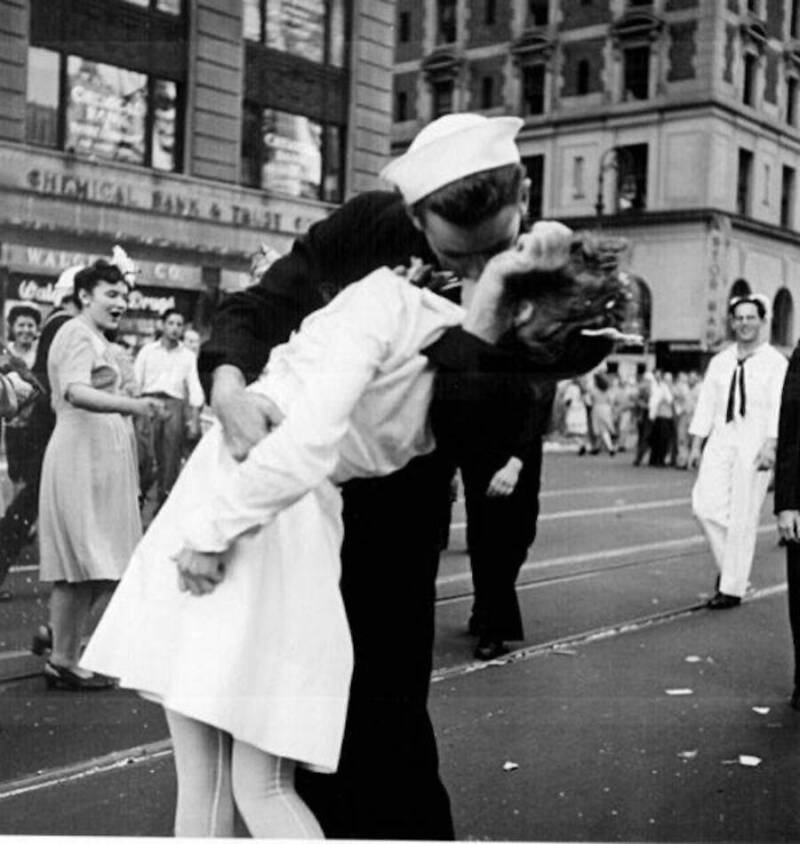 US Archives/Wikimedia CommonsA sailor kisses a woman in New York City to celebrate the victory over Japan. August 14, 1945.

World War II lasted for six years and one day after the global conflict officially began, from September 1, 1939, until September 2, 1945.

How Did World War II End?

World War II was won by the Allied powers, who triumphed over the Axis powers after six bloody years of battles, atrocities, and invasions.

How Many People Died In World War II?

Tens of millions of soldiers and civilians died during World War II. It’s difficult to pin down an exact number of casualties — especially considering how many countries were involved in the conflict. But some historians estimate that as many as 80 million people had perished by the end of the war.

How Many Americans Died In World War II?

Although the exact number is difficult to calculate, it’s been estimated that over 400,000 Americans died in World War II. Many of them were laid to rest in Europe, where they had spent their turbulent final moments.

After reading these fascinating facts about World War II, look through these pictures of World War II in vivid color. Then, discover the stories of 11 brave resistance fighters who took on the Nazis in the 1930s and 1940s.