The Story Of James Doohan, The ‘Star Trek’ Actor Who Took Out Two German Snipers During World War II

Long before he was Scotty on Star Trek, World War II hero James "Jimmy" Doohan was known as the "craziest pilot in the Canadian air force."

In his iconic role on Star Trek as “Scotty,” James Doohan inspired a whole generation of real-life aeronautical engineers. But many of those who idolize him don’t even know about his real-world heroic exploits as one of the 14,000 Canadian soldiers who landed on the shores of Normandy during World War II. 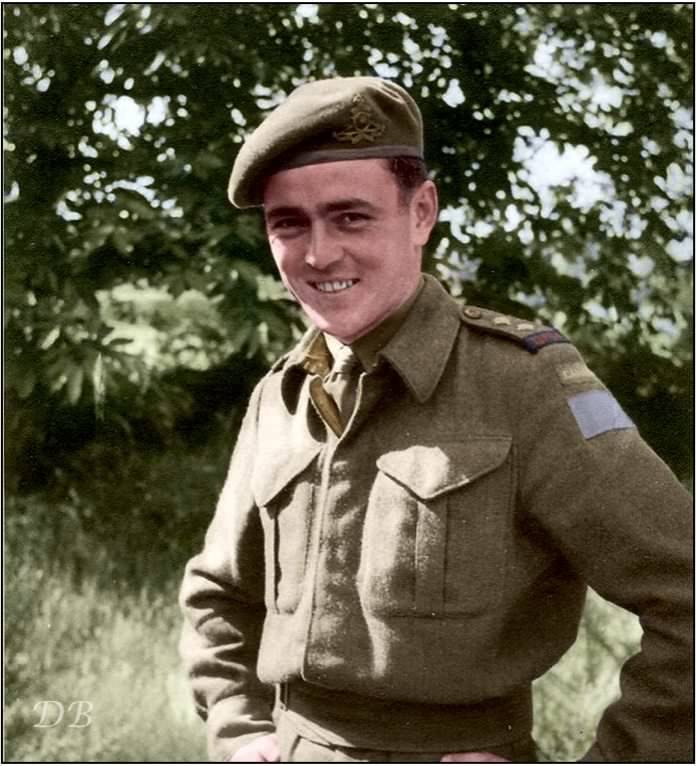 Indeed, the sci-fi actor has a war story almost stranger than fiction, and one that lands him the title of “craziest pilot in the Canadian Air Forces.”

Television’s most famous Scotsman was actually a Canadian of Irish descent. Born on March 3, 1920, in Vancouver to a pair of Irish immigrants, James Doohan was the youngest of four children. His father worked as a pharmacist, dentist, and veterinarian, but was also a severe alcoholic who made life very difficult for his family.

After attending high school at the Sarnia Collegiate Institute and Technical School, where he particularly excelled in physics, chemistry, and mathematics, Doohan fled his tumultuous home life and enlisted in the Royal Canadian Army.

The young cadet was just 19 years old and the world was just a year away from its most devastating point in the war.

By 1940, James Doohan had worked his way up to the rank of lieutenant and was sent over to England with the 14th Field Artillery Regiment of the 3rd Canadian Infantry Division.

Four years later, his division would take part in the greatest maritime invasion in history: D-Day. The invasion of France at Normandy beach was a joint operation between Canada, Britain, and the United States, with each allied country assigned to take a portion of the beaches. The Canadian Army, and Doohan’s division along with it, was tasked with taking the area known as Juno Beach. 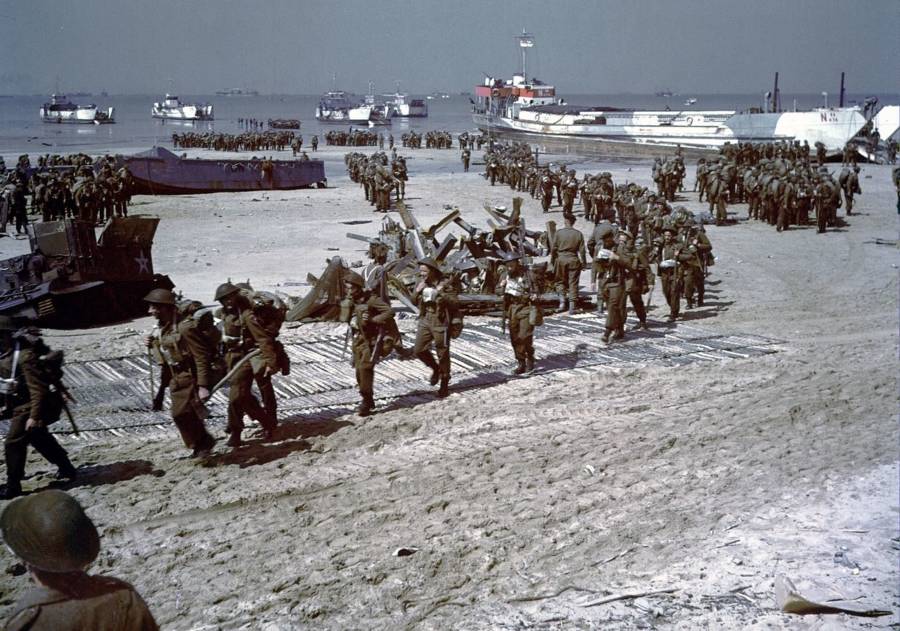 Library and Archives Canada/Wikimedia CommonsCanadian soldiers disembark at Juno Beach in Normandy, France during the D-Day invasion on June 6, 1944.

Although air support had been sent out prior to the landing to try and chip away at the formidable German defenses, the soldiers sailing towards the Normandy beaches the morning of June 6th, 1944 still faced a seemingly insurmountable task.

James Doohan and his men had to somehow get close enough to the shore that they could then disembark without drowning under the full weight of their equipment, all the while enduring a constant barrage of enemy fire in the broad daylight.

Once on the actual beaches, they had to make their way across sand littered with anti-tank mines the Germans had buried and try to avoid being shot by snipers backed by the advantage of higher ground. Those who made it off the beaches alive then had to face off against two German infantry battalions before finally facing their objective.

James Doohan seemed to have fate on his side that historic day as he led his men onto the beaches of Normandy. They miraculously managed to cross over the beaches without setting off any of the mines. The Canadians secured their objective before noon. Troops continued to flood in throughout the day and consequently transformed the beaches that had been an Axis death trap that morning into an Allied foothold by night.

Doohan managed to take out two German snipers, but would not emerge from D-Day entirely unscathed. 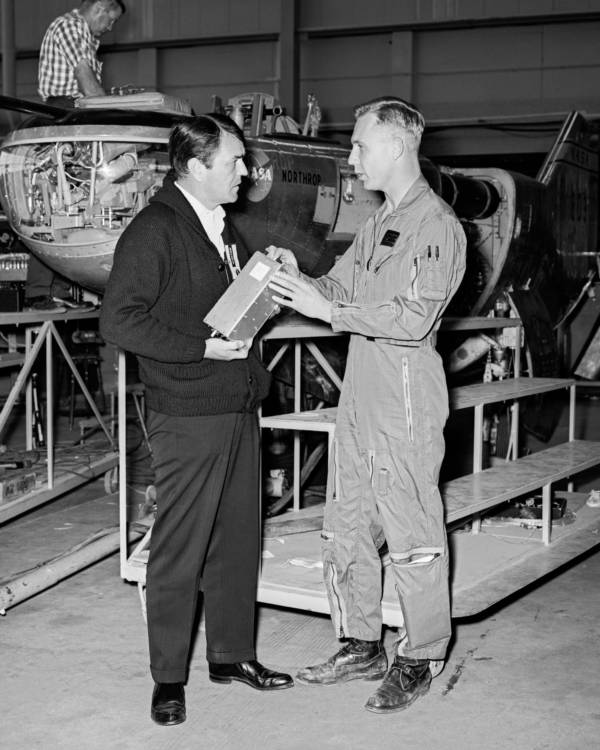 Around 11 PM that night, a jumpy Canadian sentry fired at Doohan as the lieutenant was walking back to his post. He was hit by six bullets: four times in the left knee, once in the chest, and once in the right hand.

The bullet to his hand took off his middle finger (an injury he would always attempt to hide during his later acting career) and the one to his chest would have been fatal had it not been deflected by the cigarette case Doohan had just put back into his pocket, leading the actor to later quip that smoking had actually saved his life.

Doohan recovered from his wounds and joined up with the Royal Canadian Artillery, where he was taught how to fly a Taylorcraft Auster Mark IV plane. He was later dubbed the “craziest pilot in the Canadian air force” after flying between two telephone poles in 1945 just to prove that he could.

James Doohan returned to Canada after the war and planned on using the free education and training allotted to him by the country’s veteran administration for his military service to study science.

At some point between Christmas 1945 and New Year’s 1946, though, Doohan turned on the radio and listened to “the worst drama I had ever heard,” which prompted him to head down to the local radio station on a whim and do a recording on his own.

The radio operator was impressed enough to recommend Doohan enroll at a Toronto drama school, where he eventually won a two-year scholarship to the esteemed Neighborhood Playhouse in New York.

He returned to Toronto in 1953 and performed in dozens of roles on radio, stage, and television, including some bit parts in famous American series such as Bonanza, Twilight Zone, and Bewitched. Then in 1966, he auditioned for a new NBC science fiction series that would change his life — and the life of sci-fi fans — forever. 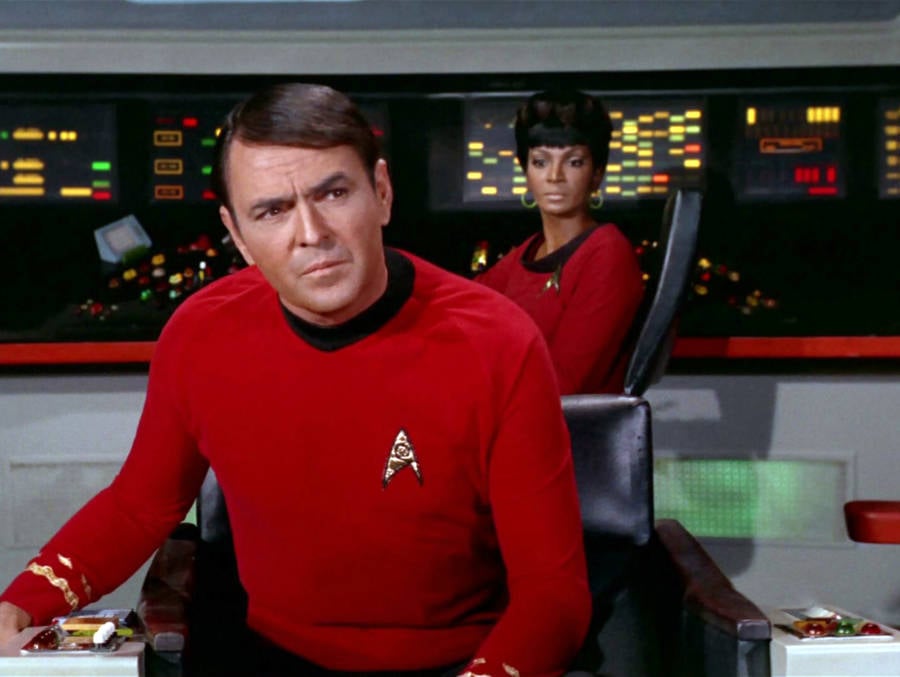 James Doohan as Montgomery “Scotty” Scott on the bridge with Nichelle Nichols as Uhura in the Star Trek episode, “A Piece of the Action.”

The part Doohan auditioned for was one of an engineer aboard a futuristic spaceship. Since he had mastered dozens of different accents and voices from his years of radio work, the producers had him try out a few and asked which he liked best.

“I believed the Scot voice was the most commanding. So I told them, ‘If this character is going to be an engineer, you’d better make him a Scotsman.'” The producers were thrilled with the character who was “99% James Doohan and 1% accent” and the Canadian joined William Shatner and Leonard Nimoy in the cast of Star Trek, the show that would forever cement them in pop culture history.

Doohan’s character, Lt. Cmdr. Montgomery “Scotty” Scott was the problem-solving engineer aboard the Starship Enterprise, captained by Shatner’s Captain Kirk. Star Trek had a loyal fanbase in the States, but one that was ultimately too small to keep it on the air and NBC canceled the series in 1969.

However, as reruns were played, the fan-base continued to grow. When Star Wars was released in 1977 and proved a tremendous success, Paramount decided to release a Star Trek film with the original writers and cast. Doohan reprised his role in not only the 1979 Star Trek: The Motion Picture, but its subsequent five sequels. 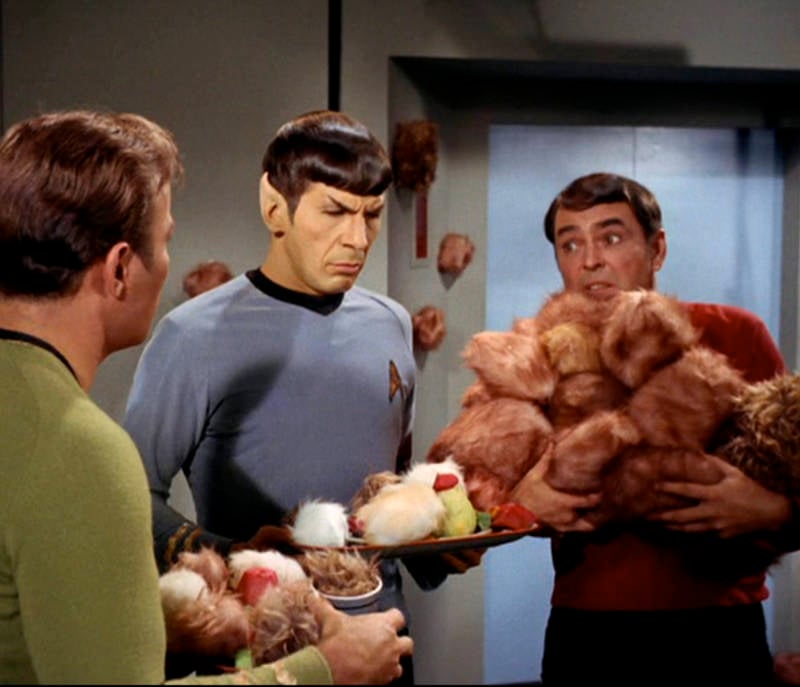 CBS via Getty ImagesJames Doohan, right, as Engineer Montgomery Scott, in a rare moment where his missing finger is visible on set of Star Trek.

Doohan initially felt pigeonholed by his most famous role. He would sometimes be turned down for other gigs straight away with the dismissal “There’s no part for a Scotsman in there.”

After realizing that he would forever be linked to his on-screen persona, he decided to enthusiastically embrace it, and attended dozens of Star Trek conventions and later even declared that he never tired of hearing fans tell him “Beam me up, Scotty.” 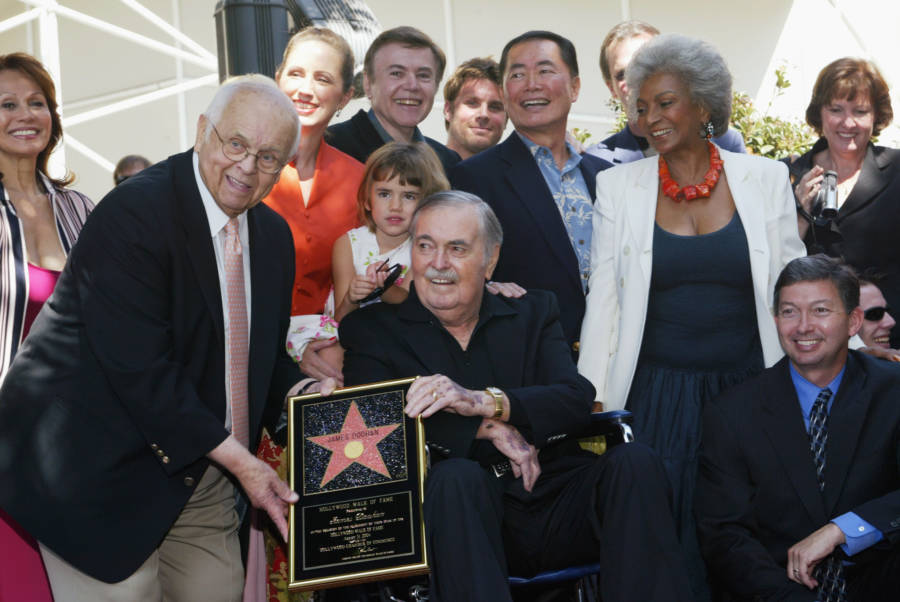 Doohan’s influence went well beyond that of a typical television actor. He was actually awarded an honorary degree from the Milwaukee School of Engineering after nearly half of the student body reported that they had chosen to study engineering because of Scotty.

But Doohan’s biggest fan was the man who perhaps comes closest to being a real-life Captain Kirk. When the actor received his star on the Hollywood Walk of Fame in 2004, astronaut Neil Armstrong made a rare public appearance to declare, “from one old engineer to another, thanks, Scotty.”

James Doohan passed away of pneumonia on July 20, 2005, at the age of 85. He is survived by his three ex-wives and seven children. In a final tribute to his lasting influence on a generation of engineers, his ashes were sent into space in a private memorial rocket.

After this look at the storied past of James Doohan, read about how astronomers discovered a real-life planet Vulcan. Then, take a look at some of the most powerful D-Day photos on the shores of Normandy.