Sally Ride, The Astronaut Who Overcame Sexism To Become The First American Woman In Space

Physicist Sally Ride made history on board the Challenger space shuttle in June 1983. Upon her death in July 2012, it was revealed she was also the first acknowledge gay astronaut in space. 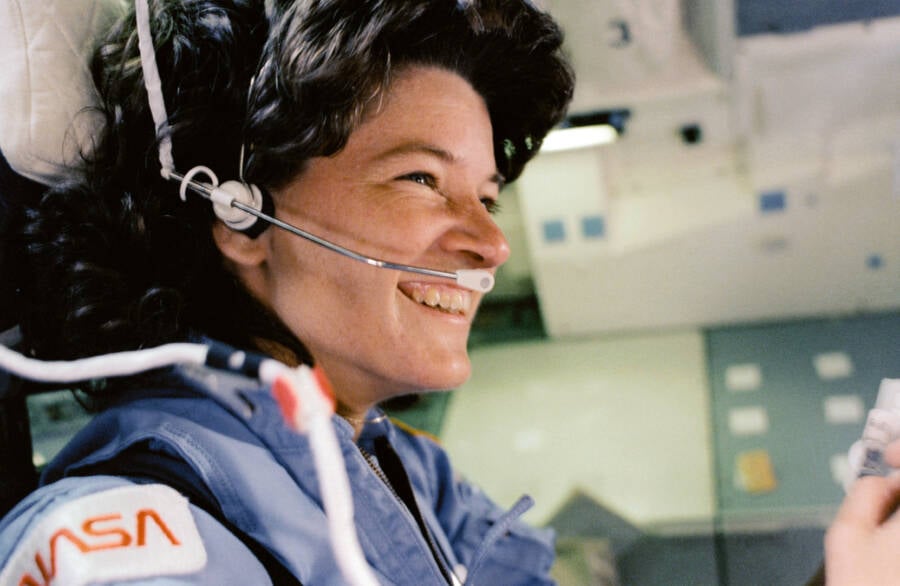 In 1977, a young woman noticed an ad in The Stanford Daily announcing that NASA was looking for female astronauts. Her name was Sally Ride, and five years later, she became the first American woman in space.

A trailblazer, Ride’s path to outer space was nevertheless paved with sexism and doubt. Journalists asked her if she’d wear make-up in space, and late-night talk shows joked about how she’d delay the launch by fretting over accessories. But Ride, for her part, only wanted to soar through the stars.

Born on May 26, 1951, in Los Angeles, California, Sally Kristen Ride grew up in a supportive, loving household with her parents and younger sister, Karen. According to The New York Times, Ride enjoyed math and science from a young age and played so much street football that her parents signed her up for tennis, which they saw as safer.

“We just let them develop normally,” her father told Newsweek in 1983. “We might have encouraged, but mostly we let them explore.”

Bright and athletic, Ride attended Westlake School for Girls on a scholarship and spent most of her free time playing tennis. Though Ride joked that tennis tournaments were a good excuse for missing church, she became a nationally ranked amateur as a teen and was even encouraged by tennis star Billie Jean King to go professional.

Instead, Ride went to college. Quipping that a “bad forehand” ended her tennis career, Ride went on to study at Swarthmore College in Pennsylvania before transferring to Stanford back in California. There, Sally Ride earned a bachelor’s degree in physics and English, a master’s degree in physics, and a Ph.D. in astrophysics.

“For whatever reason, I didn’t succumb to the stereotype that science wasn’t for girls,” Ride told USA Today in 2006. “I got encouragement from my parents. I never ran into a teacher or a counselor who told me that science was for boys. A lot of my friends did.”

While at Stanford, Ride fatefully picked up The Stanford Daily one day in January 1977, where an article on the front page caught her eye. NASA, the article explained, was looking to recruit women astronauts. After seeing what the space agency was looking for, Ride decided to throw her hat in the ring.

Eight thousand other women applied. Of those, just six were chosen — including Sally Ride. 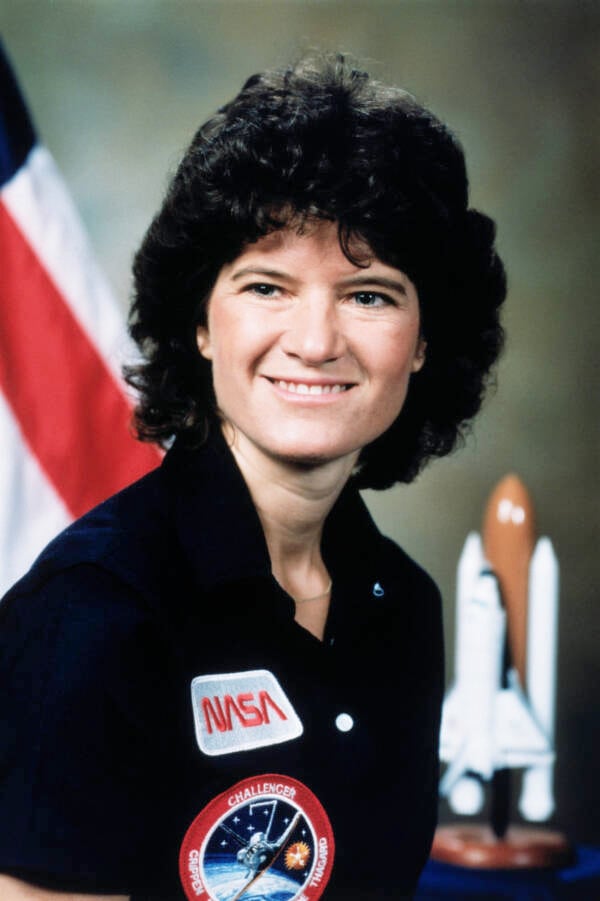 After being selected as an astronaut candidate in January 1978, Sally Ride’s training began in earnest. In addition to learning skills like parachuting and flying a jet, she also helped develop the shuttle’s robot arm and served as a capsule communicator for shuttle launches in 1981 and 1982.

Her training on Earth paid off. On April 30, 1982, NASA announced that Sally Ride would go to space as a mission specialist on the space shuttle Challenger.

“It was kind of like, ‘Are you sure you want to do this? We’re thrilled to have you on the crew, but we just want to make sure that you know what you’re getting into,'” Ride told Florida Today, as reported by Space. “And at that point, of course, all I cared about was getting a chance to fly. So I said ‘Yes-Yes-Yes.'”

She wouldn’t be the first female astronaut in space — the U.S.S.R had already sent two women to space — but Ride would be the first American. And the American press confronted her with a number of invasive questions about her unprecedented role.

According to The New York Times, Ride was asked how she’d deal with menstruation in space, if she’d wear make-up or a bra, if she worried that spaceflight would impact her ability to have children, and whether or not she “wept” when she had problems.

“Why doesn’t someone ask Rick [Navy Cmdr. Frederick H. Hauck, the pilot of the shuttle mission] those questions?” Ride asked at one point, according to Newsweek. And at a NASA news conference, she added, “It’s too bad this is such a big deal. It’s too bad our society isn’t further along.” 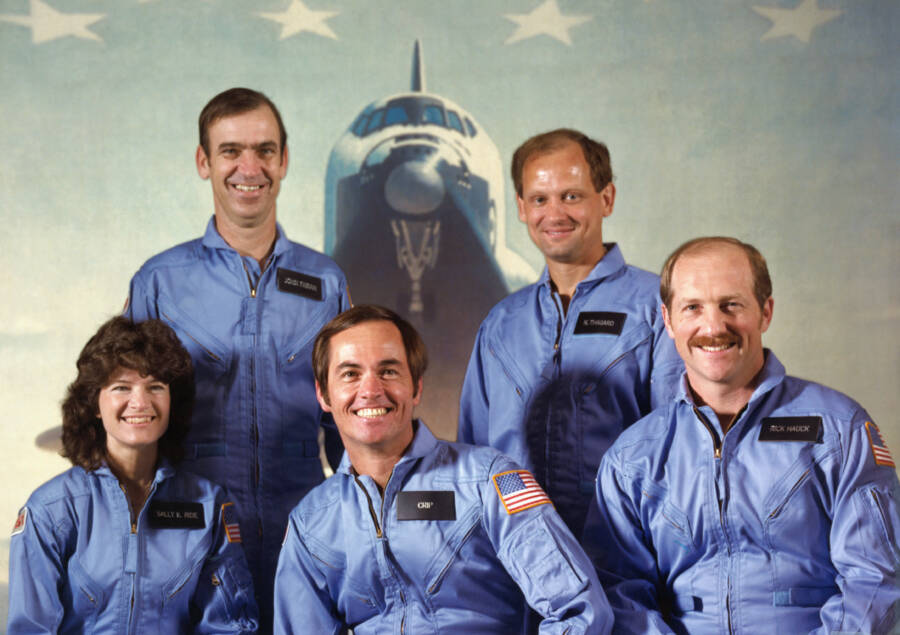 Though American society may not have been ready, Sally Ride was. On June 18, 1983, she blasted off into space on the shuttle Challenger.

“On launch day, there was so much excitement and so much happening around us in crew quarters, even on the way to the launch pad, I didn’t really think about [being the first American woman astronaut] that much at the time,” Ride said in a 2008 interview. “[B]ut I came to appreciate what an honor it was to be selected to be the first to get a chance to go into space.”

She and the others spent six days above the earth. According to NASA, the Challenger crew deployed two satellites for Canada and for Indonesia.

The mission was routine — but Sally Ride’s role in it was historic. She returned to Earth as the first American woman to go to space, and the youngest NASA astronaut ever. And Ride, just 32, had a lot more to accomplish.

The Later Life And Death Of Sally Ride 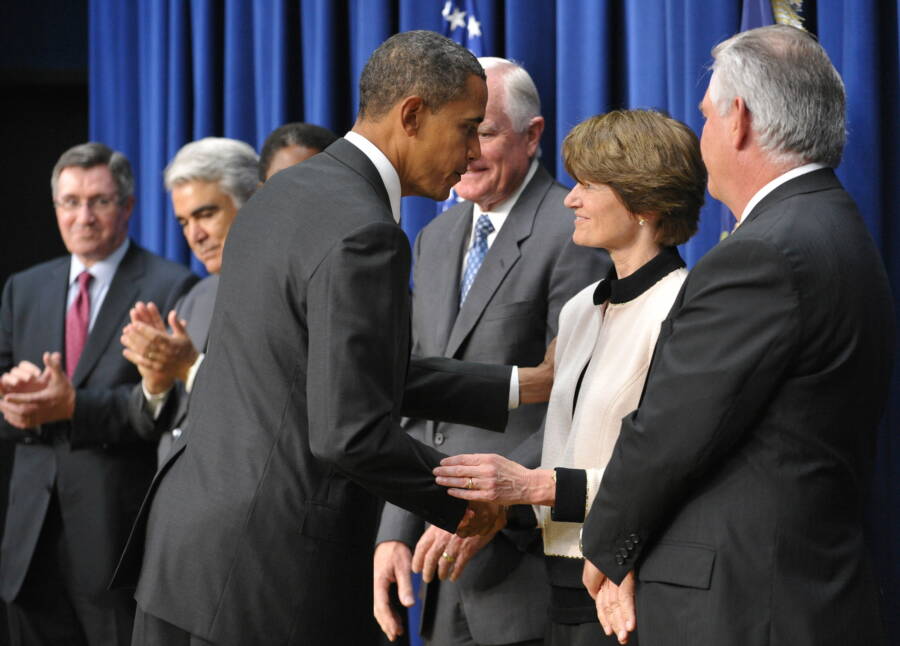 MANDEL NGAN/AFP via Getty ImagesBefore Sally Ride died, she met with President Barack Obama. Here she is after speaking on the expansion of his “Educate to Innovate” initiative. Sept. 16, 2010.

In the years that followed her historic flight, Sally Ride remained deeply involved with NASA. She went to space again in 1984 and planned to go a third time before the devastating Challenger explosion in 1986.

Then, Ride sat on the panel that investigated the accident, a role she repeated in 2003 after the shuttle Columbia exploded during reentry.

“It’s important to realize that rockets are rockets, and rockets are still risky technology, and that’s true of every type of rocket that we or any other country have ever built,” she told the Los Angeles Times in 2003. “Rockets don’t work 100 percent of the time. They just don’t.”

Before Sally Ride died, she spent her later years encouraging girls to study math and science. According to The New York Times, she wrote six science books for children and established the Sally Ride Science organization to “make science and engineering cool again.” Ride also came up with NASA’s EarthKAM project, which lets young students take pictures of Earth from space.

All the while, Ride kept her private life private. It wasn’t until Sally Ride died on July 23, 2012, at the age of 61 that the world learned two facts about her life. One, she’d been suffering from pancreatic cancer for the past 17 months, and two, she’d been with her partner, Tam O’Shaughnessy, for 27 years.

“Sally never hid her relationship with Tam,” Ride’s sister Kate told NBC. “They were partners, business partners in Sally Ride Science, they wrote books together, and Sally’s very close friends, of course, knew of their love for each other. We consider Tam a member of our family.”

The revelation meant that Sally Ride was not just the first female American astronaut — but also the first acknowledged gay astronaut.

Today, Sally Ride is seen as a woman who opened the door for others. To date, dozens of women have gone to space, and NASA’s 2013 class was equally split between men and women for the first time. As feminist Gloria Steinem presciently noted ahead of Ride’s historic 1983 launch:

“Millions of little girls are going to sit by their television sets and see they can be astronauts, heroes, explorers, and scientists.”

After this look at the life and death of Sally Ride, check out astronaut Andre Kuipers’ photos of Earth. Then, read about Polly Adler, one of the first female moguls.