In 2001, HBO released the celebrated World War II miniseries Band of Brothers. The 10-episode show followed the men of Easy Company, an American Army unit that found itself at the center of some of the war’s most dramatic moments. But Band of Brothers was much more than a mere TV show.

The show was based on the book Band of Brothers: E Company, 506th Regiment, 101st Airborne from Normandy to Hitler’s Eagle’s Nest by historian Stephen E. Ambrose, who had written his tome based on interviews with the surviving members of the real-life Easy Company.

Though they came from all walks of life, these men trained, fought, and died together between 1942 and 1945. They landed at Normandy on D-Day, valiantly withstood a Nazi attack in the Battle of the Bulge, and gleefully looted Adolf Hitler’s “Eagle’s Nest” in the Alps as the war came to a close.

Though Band of Brothers is, of course, a fictional portrayal of the unit, the men of Easy Company were very real. This is their astonishing true story.

Inside The Formation Of Easy Company 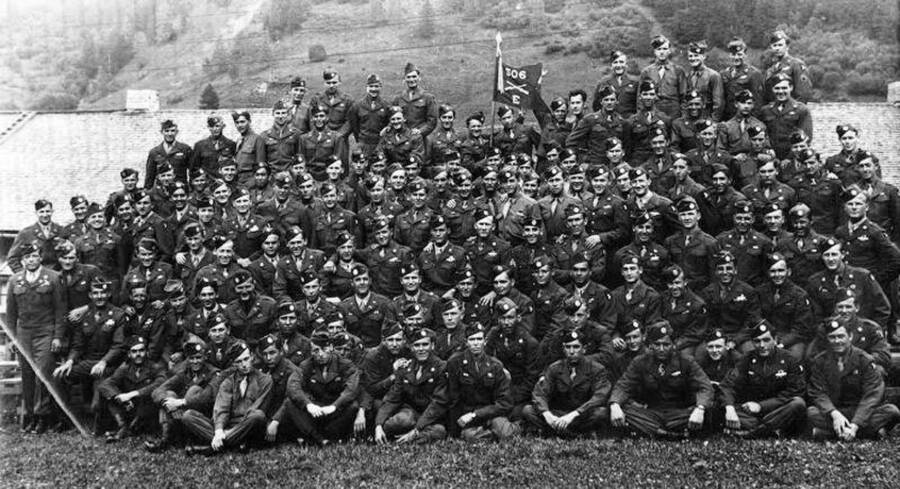 In July 1942, the 140 men and seven officers who formed the first iteration of Easy Company — or E Company, 2nd Battalion of the 506th Parachute Infantry Regiment of the 101st Airborne Division — gathered for training at Camp Toccoa in Georgia. The soldiers had a few attributes in common.

“They were young, born since the Great War,” Ambrose wrote in his 1992 book, Band of Brothers: E Company, 506th Regiment, 101st Airborne from Normandy to Hitler’s Eagle’s Nest. “They were white, because the U.S. Army in World War II was segregated. With three exceptions, they were unmarried.”

But the men also came from different walks of life. Easy Company’s first commander, Herbert Sobel, came from a military education and had experience in the Military Police Corps. Richard “Dick” Winters, who’d later come to command the unit, had to work to put himself through Franklin & Marshall College, whereas the wealthy Lewis Nixon attended Yale. 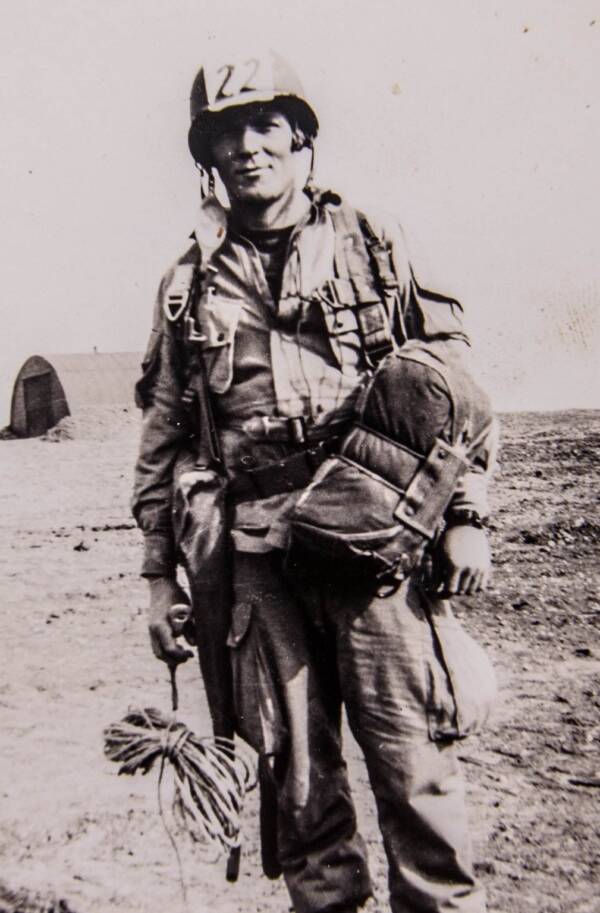 No matter where they’d come from, however, the men all faced the same challenges of training at Camp Toccoa. And not all of them were up to it.

“Officers would come and go,” Winters recalled, according to The New York Times. “You would take one look at them and know they wouldn’t make it. Some of these guys were just a bowl of butter.”

Many also chafed under Sobel’s leadership. The “devil in jump boots,” as one of his men called him, trained his soldiers hard and subjected them to embarrassing punishments like digging a six-foot-by-six-foot hole in the ground — and then filling it back in. Winters even called Sobel “just plain mean,” though he also admitted that Sobel helped whip the men in shape.

Although Sobel was eventually reassigned, the men of Easy Company swiftly became an elite unit. They were sent to England in September 1943, where they prepared for their first combat mission — which would be D-Day. 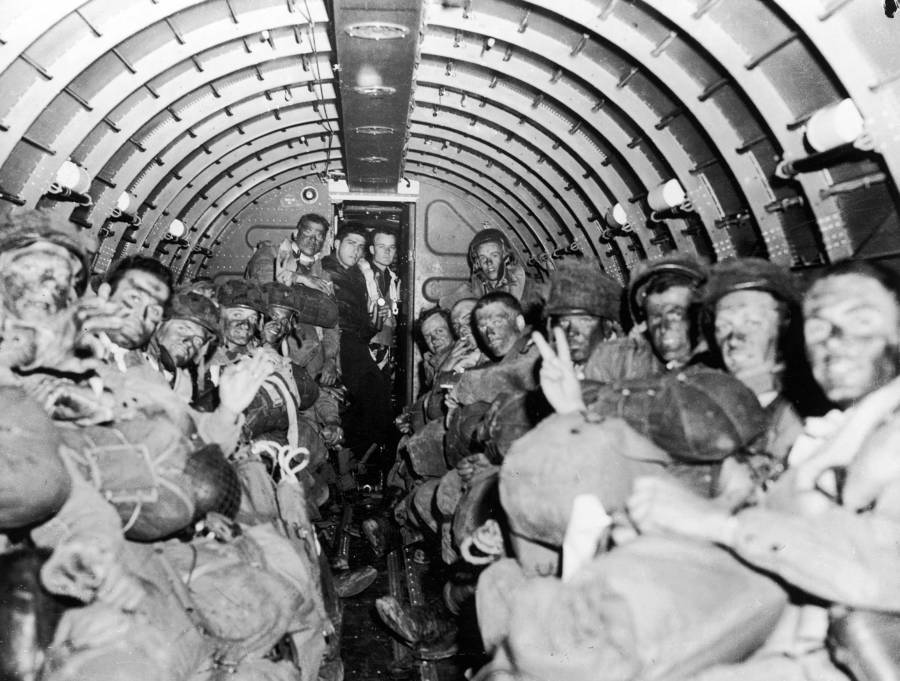 For the men of Easy Company, they entered World War II in earnest on June 6, 1944. Then, they parachuted alongside thousands of other Allied soldiers onto the beaches of Normandy during Operation Overlord or D-Day.

“Got on a plane, traveled over the Channel,” Easy Company member Edward Shames later recalled in an interview. “By the time we got across, all hell occurred… when we hit the coast, it looked like the Fourth of July.”

The unit sadly lost 65 men in Normandy. But they also proved their mettle. During Operation Overlord, Winters was commanded to attack a battery of four German guns at Brécourt Manor. As reported by History Net, a captain told him: “There’s fire along that hedgerow there. Take care of it.”

“That was it,” Winters later said. “There was no elaborate plan or briefing. I didn’t even know what was on the other side of the hedgerow. All I had were my instructions, and I had to quickly develop a plan from there. And as it turns out, I did. We were able to take out those four German guns with the loss of only one man, Private John Hall, who was killed just in front of me.”

From there, Easy Company saw some of the most harrowing moments of the war. They participated in the Allied attempt to retake Holland, which was dubbed Operation Market Garden, in September. Then, they later relocated to Belgium to fight in the historic Battle of the Bulge in December. 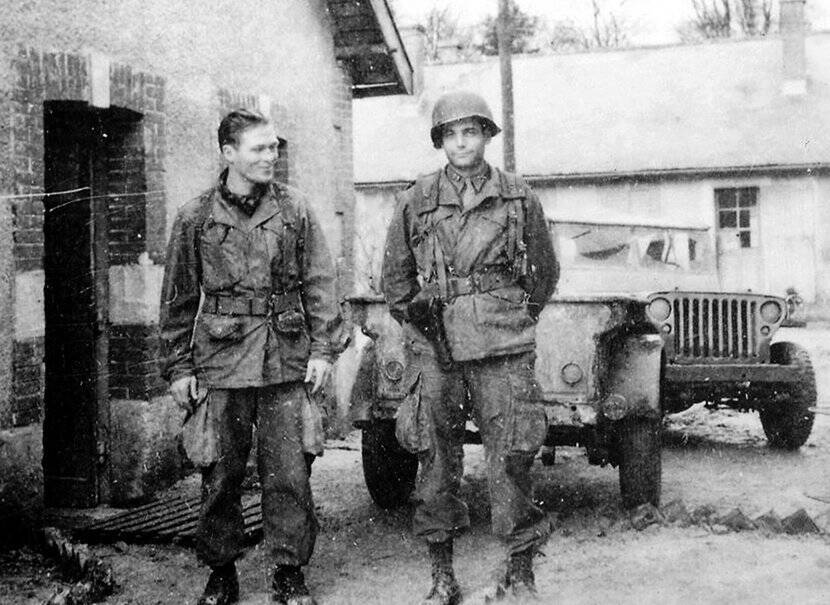 And in April 1945, the men of Easy Company encountered some of the war’s most horrific scenes when they arrived at the Kaufering complex of the Dachau concentration camp. At the Kaufering IV camp alone, according to the United States Holocaust Memorial Museum, Nazi troops had held 3,600 prisoners, most of whom they’d already forced onto death marches.

“I witnessed something that no other human being should witness,” Shames, who was the son of Russian Jewish immigrants, later said of the experience. “The stench and horror will be with me as long as I live.”

But there were moments of levity, too. In early May 1945, shortly after Adolf Hitler died by suicide, Easy Company was ordered to capture Berchtesgaden, the Bavarian town that was home to the Führer’s “Eagle’s Nest” in the Alps.

“We were the first ones there,” Shames said. “We naturally did what any godfearing soldier would do. We looted the whole place.” Though it remains debatable which unit seized the Eagle’s Nest first, there’s no question that the Easy Company men carried out the biggest raid of the building.

Shames took a couple of bottles of cognac labeled “for the Führer’s use only,” which he later used to toast his son’s bar mitzvah. The men also uncovered Hitler’s private wine collection, which they happily enjoyed.

Shortly thereafter, on May 8, 1945, Germany surrendered. With the war in Europe over, Easy Company officially disbanded later that year. In the end, according to Ambrose, the unit had suffered 150 percent casualties, as new men had constantly arrived to replace the fallen soldiers.

And yet, “at the peak of [Easy Company’s] effectiveness,” Ambrose wrote, “it was as good a rifle company as there was in the world.”

The Lasting Legacy Of This “Band Of Brothers” 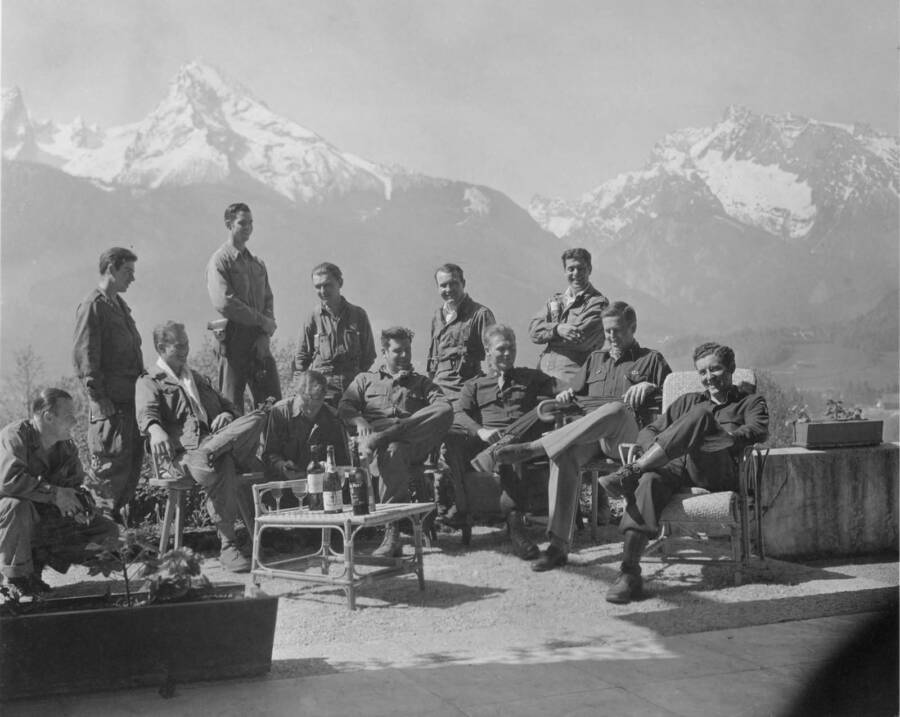 U.S. ArmySome of the members of Easy Company at Hitler’s Eagle’s Nest in the Alps.

After World War II ended, the men of Easy Company went their separate ways. Nixon went to work for his family’s company, Shames took a job at the National Security Agency, and Winters started his own business selling feed for livestock to farmers. But many of the men stayed in touch.

In fact, that’s what inspired Stephen Ambrose to write about Easy Company in the first place. After he attended an Easy Company reunion in 1988, Ambrose was struck by how close the veterans seemed.

“It was something that all armies everywhere throughout history strive to create but seldom do,” Ambrose remembered. “The only way to satisfy my curiosity was to research and write the company history.”

The historian made it a group effort. Not only did he interview surviving members of Easy Company, but Ambrose also shared the drafts of his manuscripts so that anyone could offer corrections and suggestions as needed. Not everyone was happy with the final result, however.

“They also started this thing about me yelling at the men and the other officers,” Shames, who had an argument with Ambrose over his portrayal in the book, recalled. “Of course, I yelled at them! I meant business. This is why I brought more men home than most of the officers in the 506th.”

Ambrose’s 1992 book stunned readers with its depictions of the men and their harrowing experiences of fighting in World War II. Less than a decade later, HBO produced the miniseries based on the book, Band of Brothers, introducing Easy Company’s story to an even wider audience.

No one from Easy Company survives today — Shames was the last of the “Band of Brothers” men to pass away, in December 2021 — but their legacy continues to inspire. Audiences across the world were drawn, just as Ambrose was, to their story and their closeness. As he wrote:

Theirs was “a closeness unknown to all outsiders. Comrades are closer than friends, closer than brothers. Their relationship is different from that of lovers. Their trust in, and knowledge of, each other is total.”

After reading about Easy Company, discover the story of the Niland brothers who inspired the movie Saving Private Ryan. Then, take a look through these stunning photos that bring World War II to life.