Known to this day for his recording of "Hallelujah," Jeff Buckley died at just 30 years old when he waded into the Mississippi and drowned on May 29, 1997. 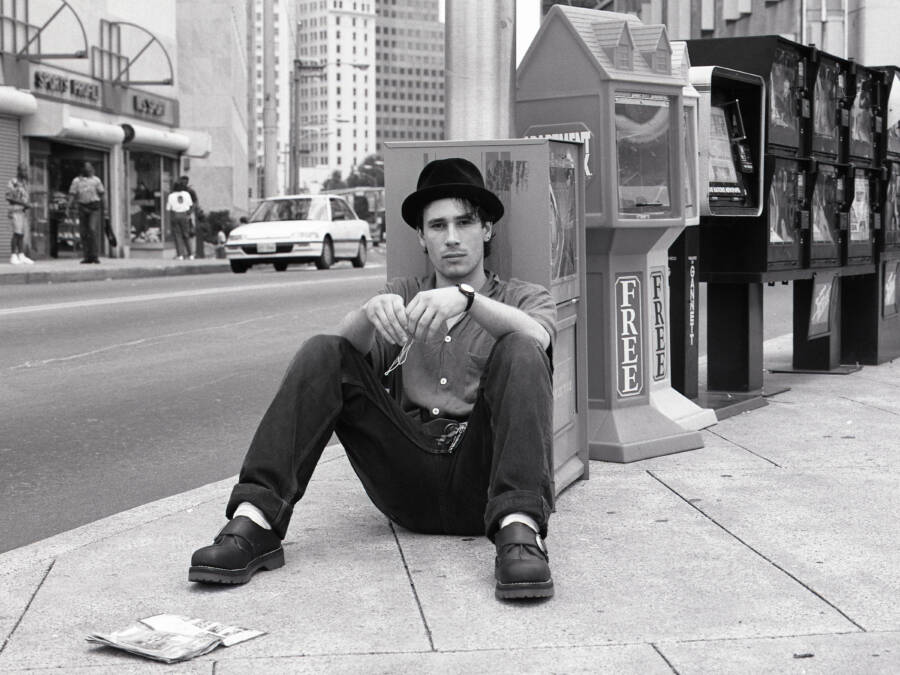 David Tonge/Getty ImagesJeff Buckley in Atlanta in 1994 — the year he released his debut album Grace.

No one witnessed Jeff Buckley’s death. On May 29, 1997, in Memphis, Tennessee, the singer who is now famous for his rendition of Leonard Cohen’s “Hallelujah,” waded fully clothed into a channel of the Mississippi River. His roadie who was standing on the bank kept a nervous eye on him — but when he looked away to move a boombox from the water’s edge, Buckley simply vanished.

Just six weeks shy of his 31st birthday, Buckley was found dead on June 4 — spotted by a passenger on a riverboat called American Queen. He had drowned in the perilous waters of the Mississippi River, cutting short a promising career as a soulful singer who surely had a bright future ahead of him.

But in the aftermath of Jeff Buckley’s death, questions lingered. Had Buckley been drunk or high when he went into the water, ignoring his roadie’s warnings? Or had the pressure of producing a second album as acclaimed as his 1994 debut, Grace, led him to drift dangerously far from shore?

From rumors of erratic behavior before his demise to the surprising results of his autopsy report, this is the true story of how Jeff Buckley died.

Jeff Buckley’s Early Life As The Son Of Two Musicians 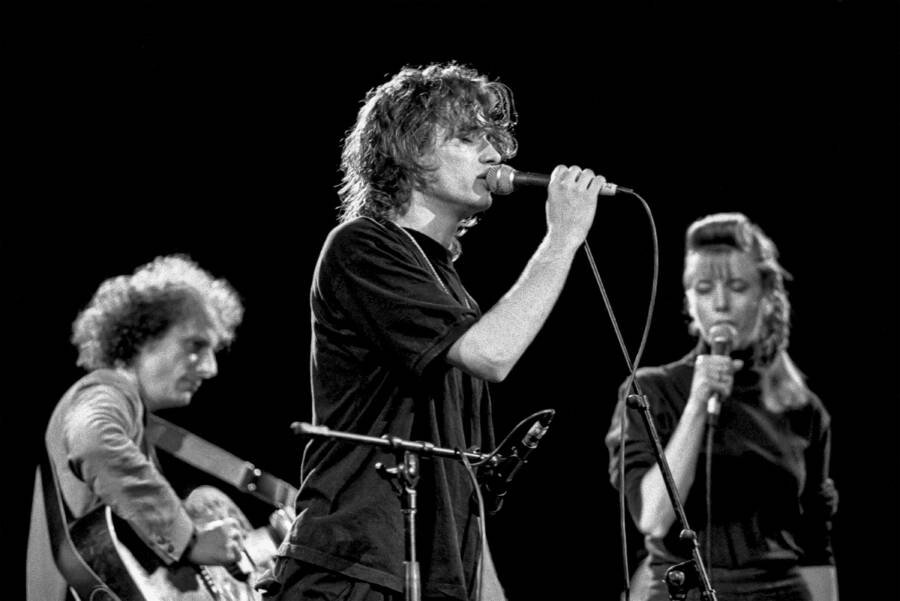 Jack Vartoogian/Getty ImagesJeff Buckley singing at a tribute concert for his late father at St. Ann’s Church in Brooklyn, New York, on April 26, 1991.

Born on November 17, 1966, Jeffrey Scott Buckley had music in his blood. His mother, Mary Guibert, was a classically trained pianist. His father, Tim Buckley, was a singer who released the first of his nine albums the year his son was born.

But though Jeff would follow in his father’s footsteps, his childhood was defined by Tim’s absence. The year he was born, Tim left the family.

Just two months after that meeting, Tim died of an overdose of heroin, morphine, and alcohol. As such, Jeff grew up under the care of his mother and stepfather, Ron Moorhead, and even briefly took Moorhead’s name. Until the age of 10, “Jeff Buckley” went by “Scott Moorhead.”

Despite this, Jeff Buckley couldn’t entirely escape his father’s shadow. Like both his parents, he loved music and seemed to be a talented musician. He dabbled in various genres and even attended the Los Angeles Musicians Institute. And when he was invited to play at a concert tribute to his father’s life in Brooklyn, New York, Jeff Buckley agreed to go.

“It bothered me that I hadn’t been to his funeral, that I’d never been able to tell him anything,” he told Rolling Stone in 1994. “I used that show to pay my last respects.”

It proved a fateful decision. According to Rolling Stone, Buckley wowed music industry types in the audience. He soon afterward signed with Sony, released an album called Grace in 1994, and hit the road.

After three years of touring, however, Buckley’s recording company wanted him to start on his next album. And the task terrified him.

“He was on edge in terms of being completely afraid to make a second album,” friend Nicholas Hill told Rolling Stone.

Another friend, Penny Arcade, seconded Hill, telling the magazine that Buckley “was really going through a lot of changes about the new album, feeling a lot of pressure. He just had his 30th birthday. He was pretty upset, pretty shaky, and he said, ‘I just want to be as good as my father.'”

The singer eventually decided to go to Memphis, Tennessee to record his second album — tentatively called My Sweetheart the Drunk — after discarding a number of tracks produced by Tom Verlaine.

Tragically, Jeff Buckley died instead, drowning in the Mississippi River on the night his band was supposed to arrive.

The Tragic Story Of Jeff Buckley’s Death In Memphis 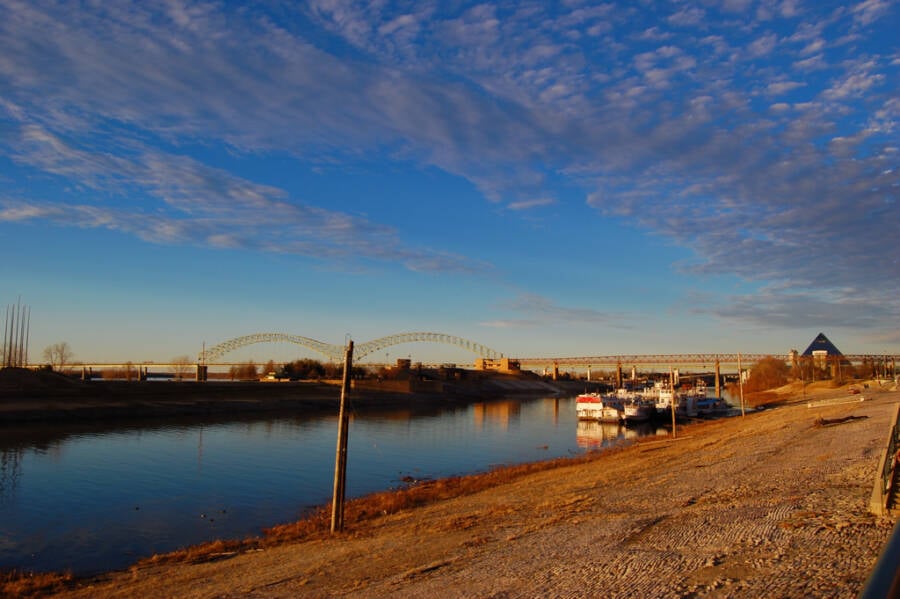 By the time Jeff Buckley died in Memphis, Tennessee, his behavior had prompted some concern among those close to him. His manager, Dave Lory, told NPR in 2018 that the singer had been “acting erratically.”

On May 29, 1997, Buckley’s erratic behavior went a step too far. After failing to find the building where he was supposed to rehearse with his band later, he and his roadie, Keith Foti, drove down to a channel of the Mississippi River called Wolf River Harbor.

Despite the trash that littered the riverbank, Buckley — still wearing his jeans, shirt, and combat boots — began to wade into the water. And though Foti warned Buckley multiple times, the singer continued to drift further into the river, singing Led Zeppelin’s “Whole Lotta Love” into the night.

When a small boat zoomed by in the darkness, Foti yelled at Buckley to get out of the way. But when a larger boat approached, Foti turned away from the river to move their boombox from the ensuing wake. Upon turning back, he told Rolling Stone, “There was no sight of Jeff.”

“I just froze,” Lory told NPR, of getting the news that Buckley had gone missing in the river. “I thought I was having a dream. I dropped the phone and you don’t know what to do. Thank god there was no internet [because] it would have been tweeted off the banks. You just go numb. I was totally numb, no emotion.”

He flew to Memphis from Dublin, he recalled, where he stood on the riverbank and cried and threw rocks into the water. “I said, ‘How dare you leave me with this pile of you know what.'”

A few days later, on June 4, Jeff Buckley’s body was spotted by a passenger on a riverboat called the American Queen. According to Rolling Stone, his body was identifiable by the singer’s purple-beaded navel ring.

But questions remained. Had Jeff Buckley died while drunk or high? And had he meant to drift into the river — and never return to shore?

The Aftermath Of His Tragic Drowning

A few weeks after Jeff Buckley died, the Shelby County Medical Examiner released their toxicology report, confirming that Jeff’s cause of death had been “accidental drowning.” Though he had been drinking, the report found he had a low blood alcohol level and no drugs in his system.

“We’re not investigating anything further,” Lt. Richard True told news outlets. He explained that Buckley was likely dragged down by the river’s undertow and that he was furthermore weighed down by his boots. “Water getting in those could make it difficult to swim,” True said.

The more difficult question to answer was whether or not Buckley had had any suicidal tendencies. To The New York Times in 1993, the singer had once quipped “I’m sick of the world. I’m trying to stay alive.” And his friends remember his significant stress about producing a second album.

But though Jeff Buckley’s official website declares that his death “was not ‘mysterious,’ related to drugs, alcohol, or suicide,” Lory, his manager, claims that the truth lies somewhere in between.

To NPR he explained that a psychic told him: “Well, I don’t know if this makes sense, but he didn’t mean for it to happen, but he didn’t fight it. It’s not your fault. It’s okay to let go.'”

For many of his friends, family, and fans, however, Jeff Buckley’s death at the age of 30 isn’t an easy thing to move on from. And his mother, Mary Guibert, has worked hard to protect her son’s musical legacy. 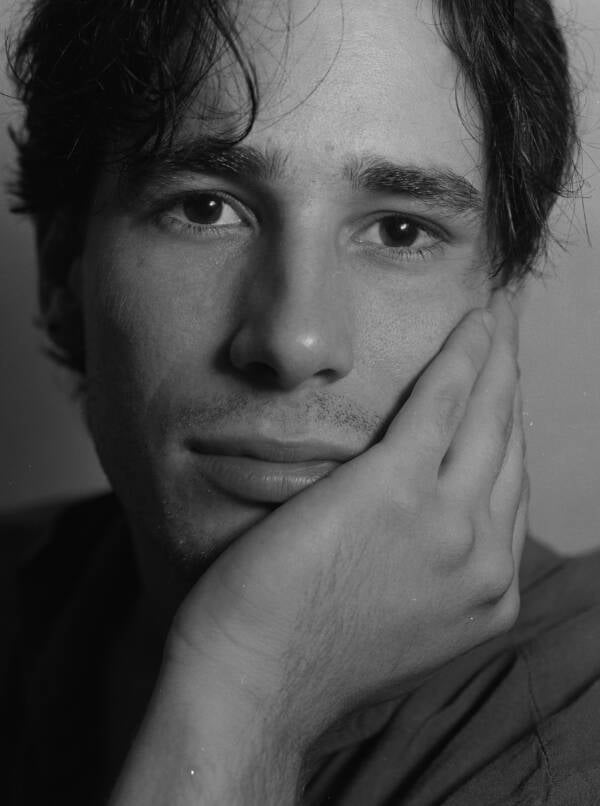 Shortly after Jeff Buckley’s death, his mother learned that Sony planned to go ahead and release the tapes that he’d recorded with Tom Verlaine.

“We found Jeff’s body and we had the two memorial ceremonies in July and August,” she recalled to The Guardian. “I went home and then I started to get calls from the band members saying, ‘Why are you going ahead with the album? Jeff never wanted those things! He wanted the [Tom] Verlaine tapes burned and blah, blah, blah.’ And I’m going, ‘Whoa, wait, nobody’s doing anything!'”

Guibert then learned that Sony did, indeed, intend to release the tracks that Buckley had wanted to rerecord. She and her lawyer promptly sent the company a cease-and-desist letter, and Guibert made her terms known.

“I said, ‘I want one thing,'” she recalled of meeting with Sony executives. “‘I want one thing. Just give me control and we’ll do it all together. You’ll be able to use everything you’ve got – that’s worth using.'”

In the end, Guibert and Sony reached a compromise. They released My Sweetheart the Drunk at the end of 1997 as a two-disc album, featuring both the Verlaine-produced tracks and tracks that Jeff Buckley had made himself.

Since then, Guibert has continued to play a prominent role in her son’s musical legacy. She’s poured through his interviews, tapes, and diaries — learning “more than any mother should know about her son” — worked with biographers and documentarians, and more.

Part of her job, too, is setting the record straight about Jeff Buckley’s death. Since 1997, she’s fought back against those who wonder if her son died by suicide or from a drug overdose.

“Every once in a while, I love to raise my head up and say, ‘Let’s take another look at this, folks,'” she told The Guardian. “We know that Jeff was happy at the moment that he walked into the water. He was singing a song and talking to his friend about love. This was not the act of a man who was about to … well, goodbye cruel world, or totally drugged out or drunk, or out of his mind with depression.

“This was just a sheer, horrible, freak accident that happened so unfreakishly.”

For Jeff Buckley himself, his life was always about one thing — the music. As he stood on the precipice of fame in 1993, he told The New York Times, “You know when someone puts out an album, and then they start only playing big places? I hope I never end up like that.”

At another time, he said: “I don’t really need to be remembered. I hope the music’s remembered.”

Though Jeff Buckley’s death certainly makes up a part of his legacy, his music lives on — and speaks for itself.

After reading about Jeff Buckley’s death in the Mississippi River, go inside the story of rock star Chris Cornell’s tragic death and learn about the the musicians who sadly became part of the 27 Club.