As an alarming number of gray whale corpses wash ashore in Washington State, the local government is asking landowners to donate their property as makeshift graveyards. 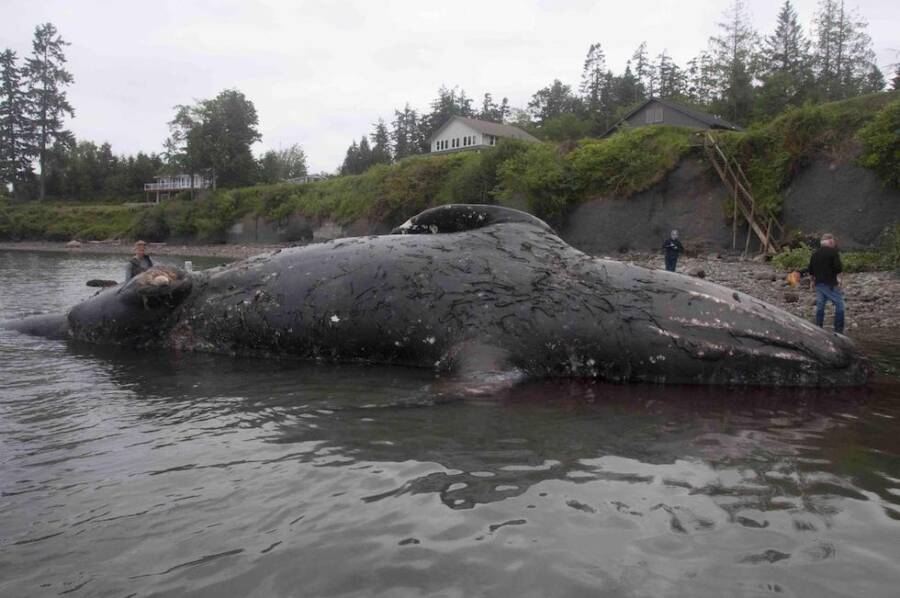 Mario RiveraMario Rivera and wife Stefanie Worwag are the first to accept NOAA’s call for beachfront property owners to use their land to dispose the growing number of whale corpses.

In more tragic news about the continuous destruction of our environment, about 30 gray whales have reportedly been found dead ashore the Washington state coast around Puget Sound this year, the highest number in a single year in the last two decades.

Sadly, marine authorities are bracing for more whale corpses to wash up on U.S. beaches. In response to this macabre prediction, the National Oceanic and Atmospheric Administration (NOAA) has put out a call to residents who own property along the state shoreline to volunteer their beachfront property as a site for the giant carcasses to decompose. Otherwise, there may not be enough land to act as the final resting spot for these whales.

NOAA’s request is a big ask given that gray whales can reach up to 40 feet long, which means that it could take several months for the body to fully decompose. Husband and wife Mario Rivera and Stefanie Worwag, who live in a waterfront house near Port Hadlock, are the only ones to have accepted NOAA’s request so far.

“I’m a veterinarian. So, for me – it’s just interesting to see how fast it goes. What kind of animal critters it attracts,” Worwag, who also helped with the necropsy examination of the whale carcass on their property, told KOMO News.

“I think we both were just interested. Let’s see… We’ve never had a whale there. How long does it take? What do we have to expect?”

The gray whale corpse in Worwag’s backyard was found in a shipping lane five miles south of her seaside home. When the whale was dissected, authorities found something unusual: pieces of plastic and leftover eelgrass inside the whale’s stomach.

According to Rivera, eelgrass is not a typical part of the gray whale’s diet which has led experts to believe that the whale was force-feeding itself due to starvation.

“They were basically desperation feeding, desperation eating. It’s like a starving human eating grass to stay alive and it can’t. That’s the very sad part,” Rivera quipped. He added that the whale appeared skinny and malnourished when it was moved to their property.

More than 70 dead gray whales have washed ashore along the west coast of the U.S. in Washington, California, Oregon, and Alaska, causing the federal government to declare the mass deaths as an “unusual mortality event,” a term defined by NOAA as a “stranding that is unexpected; involves a significant die-off of any marine mammal population; and demands immediate response.”

The couple said that the smell of decaying carcass isn’t so bad, and often comes and goes. A lime mixture has been used experimentally to test whether the juice can help to speed up the whale’s decomposition. Yet, the couple insists that their temporary whale graveyard has not caused much trouble for them.

“It’s decomposing faster than we thought,” Rivera continued, “It’s not that bad so we are hoping other landowners will do this.”

Citizen Science Coordinator Betsy Carlson at the Port Townsend Marine Science Center agreed on the need for more shoreland on which to put the animal carcasses.

“Private landowners stepping up would be fabulous. That would really help a lot because we never know where [the whales are] going to land,” Carlson said. 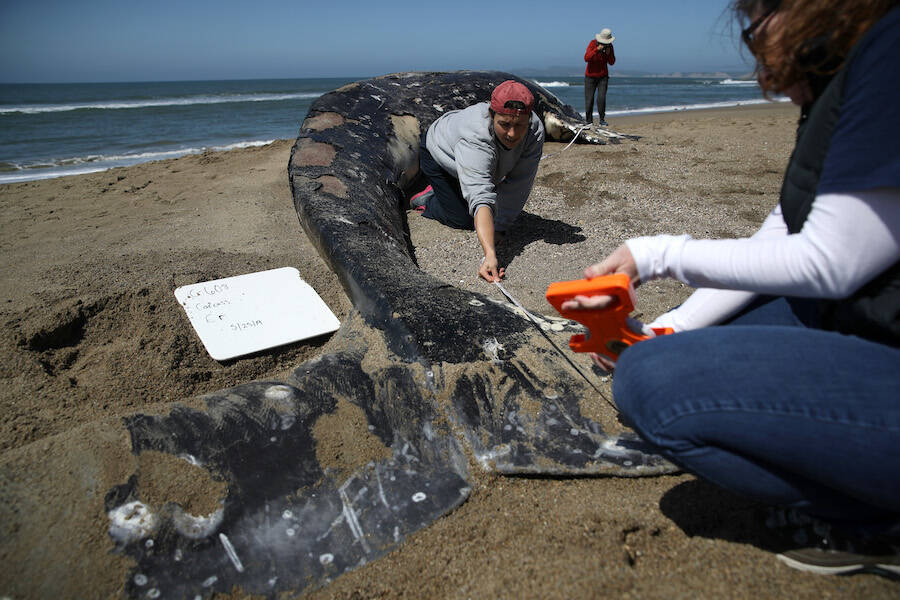 Justin Sullivan/Getty Images
Scientists measure dead juvenile gray whale on beach in California. More than 70 dead gray whales have washed up on the west coast shorelines of the U.S.

Unfortunately, gray whales are not the only marine wildlife experiencing mass deaths this year. At least 60 ice seal carcasses, many showing signs of severe hair loss, have surfaced near the Arctic’s Bering and Chukchi seas on Alaska’s west coast as well.

Most of the dead seal reports came from remote areas in the region, which has made it difficult for researchers to recover the corpses for further examination.

“We do not know what has caused these seals to die, nor have we ruled anything out. We are early in our investigation,” the spokesperson for NOAA Fisheries Alaska Region said.

Similar to the gray whale mass deaths, the dead sea lions have reached a high number with many of the carcasses discovered by the public reported to be “unusually thin.”

Because the seals are a primary food source for the Indigenous communities in northern Alaska, the environmental catastrophe also poses a serious public health threat. NOAA is working with local groups and hunters to address the issue and to make sure that residents are not consuming contaminated animals.

As for the whales, NOAA spokesman is continuing to ask for properties inland of the Puget Sound. Whale carcasses will be first placed on the beach for a necropsy and then secured so that they don’t float away.

“Yeah, we’d do it again. Yes,” Rivera said. “Without hesitation.”

Next, learn why whales are dying in droves on the east coast. And then, read about an unprecedented murder spree by killer whales in Monterey.