The Powerful Story Of Greyfriars Bobby, The Most Loyal Dog In History

After his master John Gray died in 1858, Greyfriars Bobby spent the next 14 years guarding his grave, leaving just once a day to eat. 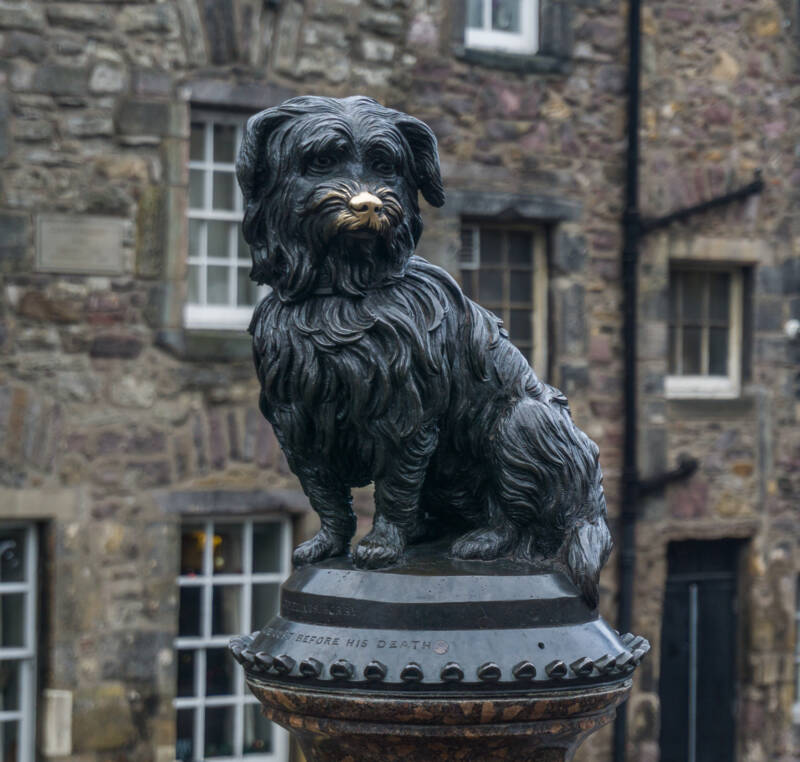 The heartwarming story of “Greyfriars Bobby” goes like this: An older Edinburgh man named John Gray became a police nightwatchman in the mid-1850s and chose a watchdog to accompany him on his long, duty-filled nights at work.

This watchdog was a pint-size Skye Terrier that John named Bobby. The wee terrier took the job (and the devotion to his owner) quite seriously. And when Gray passed away, Greyfriars Bobby reportedly stood guard by his owner’s grave for 14 whole years.

The story proved so endearing — and enduring — that even today, a statue stands in Greyfriars Bobby’s honor.

The duo patrolled the cobblestone streets of Edinburgh, stopping at the same place for coffee every shift. However, after several years on the job together, doctors diagnosed Gray with tuberculosis. He grew ill and died in February of 1858.

The town buried John Gray in Greyfriars Kirkyard (the term “kirkyard” is Scot for “churchyard”). Bobby was despondent, refusing to leave the gravesite of his master. Through day and night, through good weather and bad, Bobby is said to have stood guard at John’s headstone. The heartbroken little dog only left to eat a meal once a day.

When the one-o-clock gun fired each midday from Mills Mount Battery at Edinburgh Castle, the terrier would run to the same coffee shop where his master took him every shift: Traill’s Temperance Coffee House. Only now it was the owner, John Traill, who made sure Bobby had his fill to eat.

The town sympathized with the little terrier and looked out for his well-being. After initially trying to evict Bobby from the premises, even the kirkyard watchmen constructed a little shelter for the grieving dog.

Even in 1867 — nine years after his master’s death — when officials enacted a by-law stating that all stray dogs without licenses be destroyed, Bobby was spared. The Lord Provost of Edinburgh, Sir William Chambers, paid Bobby’s fee and bought him a collar. It had an inscription that read, “Greyfriars Bobby from the Lord Provost, 1867, licensed”.

It was for a total of 14 years that Greyfriars Bobby watched over John Gray’s final resting place. He did so with devotion and loyalty that touched the heart of anyone who heard about him. Bobby himself died in 1872, and the town gave him a special burial plot not far from his master — by the inside gates of Greyfriars Kirkyard.

The city council erected a granite statue of Greyfriars Bobby which sits across from the kirkyard where both of them rest. This was done at the request of Baroness Angela Georgina Burdett-Coutts, the president of the Ladies Committee of the RSPCA (Royal Society for the Prevention of Cruelty to Animals).

The unveiling occurred without ceremony in November 1873, one year after Bobby’s passing. The plaque reads, “Greyfriars Bobby – died 14th January 1872 – aged 16 years. Let his loyalty and devotion be a lesson to us all”.

Tour guides instruct tourists to rub the statue’s nose for good luck. Because of this, the finish has worn off the nose, making it look lighter and shinier in comparison to the rest of the body.

Over the years, several videos and movies, even a toy manufactured by the Edinburgh toy company have served to keep the spirit of Greyfriars Bobby alive. 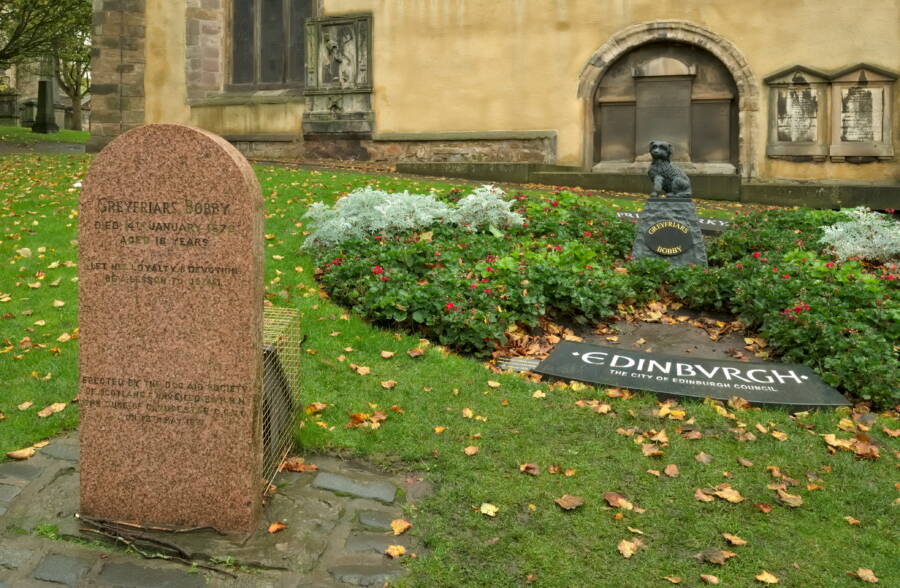 Wikimedia CommonsA headstone in Greyfriars Kirkyard is a tribute to the loyal dog.

The Surprising Controversy Over Greyfriars Bobby

As time goes by, it’s true that stories will change slightly, or become embellished. And naturally, the tale of Greyfriars Bobby is not an exception to this rule.

Two people sent opposing letters to The Scotsman newspaper in 1889 after it ran a story about the loyal dog. Both claimed close links to Greyfriars Kirk, and both claim to have known the dog personally. However, they have opposing views over the accuracy of the story as it was told — even just 17 years later.

Scottish writer and historian Forbes Macgregor wrote a book about Greyfriars Bobby, detailing some of the discrepancies in the legend. Firstly, an increase in publicity brought more tourism to the town, which meant more money coming in.

This begs the question: After the real Greyfriars Bobby died, did people who profited begin passing off another stray as the dog tourists came to see? Author Jan Bondeson believes there were probably two Bobbies – a fact noted by various media sources in 2011.

He even thinks that perhaps neither of them was the Skye terrier that belonged to Gray.

Skye Terriers only live, on average, 10-12 years. If you go by the oft-told tale, Greyfriars Bobby would have lived to be at least the age of 16. Not unheard of — but also not very common.

Secondly, it turns out that John Traill didn’t run the restaurant by the kirkyard until four years after the death of John Gray. In fact, Gray (as well as Bobby) sometimes ate a meal down at the Grassmarket after night duty. So the restaurant wasn’t the only place these two were dining, as the tale implies.

Furthermore, the one-o-clock gun firing didn’t actually begin until 1861 – three years after Bobby lost his master. Apparently, a Sergeant Scott who was based at Edinburgh Castle heard about the dog that year and befriended him. Macgregor’s book implies Scott is the one who taught Bobby to go to the restaurant at the sound of the gun.

The Heartwarming Legacy Of Greyfriars Bobby

At any rate, the trope of the loyal dog never leaving their master’s grave is folklore you’ll find in various locations outside Edinburgh. In fact, stories like this are all over. The tale invokes the memories of other famously devoted dogs, like the story of Japan’s Hachikō.

Whatever the case for Greyfriars Bobby, as a spokesman for VisitScotland says, “Separating fact from legend is always going to be tricky but regardless of how much the story has evolved over the years it has done little to deter visitors paying homage to a true Scottish icon”. He continues, “I’m sure that visitors to Edinburgh will continue to be inspired by Bobby’s story and he is worthy of his place in Scottish history”.

You can still see Bobby’s inscribed collar, bowl, and a plaster cast of the famed pooch in the Museum of Edinburgh.

Next, read about Laika, the Soviet dog who was forced to enter the Space Race. Then, find out about the mystery of Scotland’s Overtoun Bridge, and why dogs go there to die.