Meet Laika, The Soviet Dog Who Was Forced To Give Her Life For The Space Race

Also known as Muttnik, Laika the space dog made history in 1957 as the first animal to travel into Earth's orbit — and the first to die there. 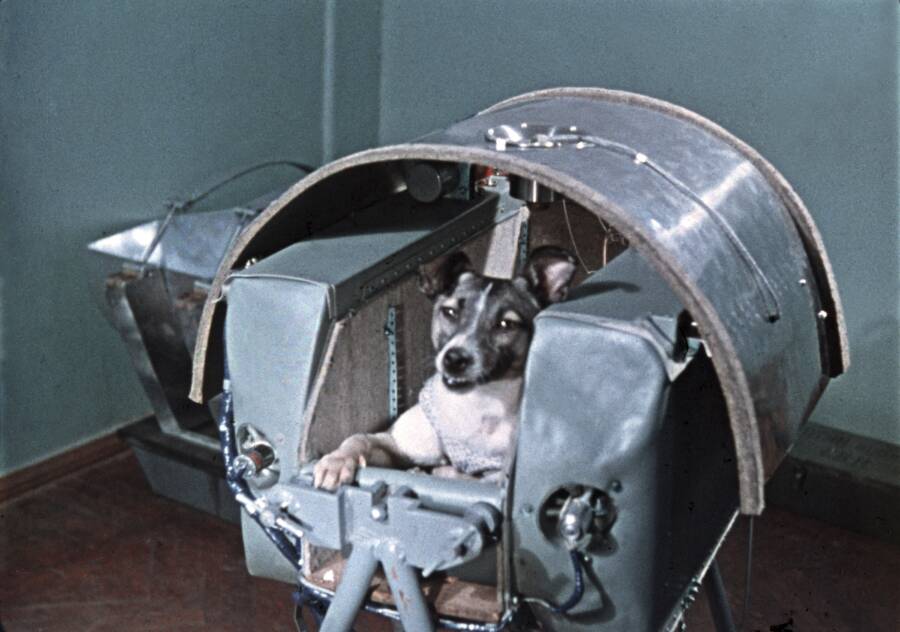 Soviet cosmonaut Yuri Gagarin is rightly credited with being the first man in space, but he was far from the first earthling to go into orbit. A few years before his groundbreaking 1961 journey, a Soviet space dog named Laika became the first animal to orbit the Earth on November 3, 1957.

Laika, whose name translated to “Barker,” was a stray husky-spitz mix who was found on the streets of Moscow. While she was far from the only dog in the Soviet space program, she was the one who was ultimately chosen for the historic Sputnik 2 mission. The original Sputnik 1 — the first manmade object in orbit — had been launched into space just a month earlier.

As for Sputnik 2, this particular mission aimed to assess the safety of space travel for humans. And at the time, Laika’s successful launch was seen as one of the Soviet Union’s biggest victories during the Space Race.

While both the Soviet Union and the United States had sent other animals into space for scientific studies before, none of them had yet reached Earth’s orbit. That meant Laika the dog would earn that distinction. But tragically, her journey was a one-way trip — and a guaranteed suicide mission.

The Early Years Of Animals In Space 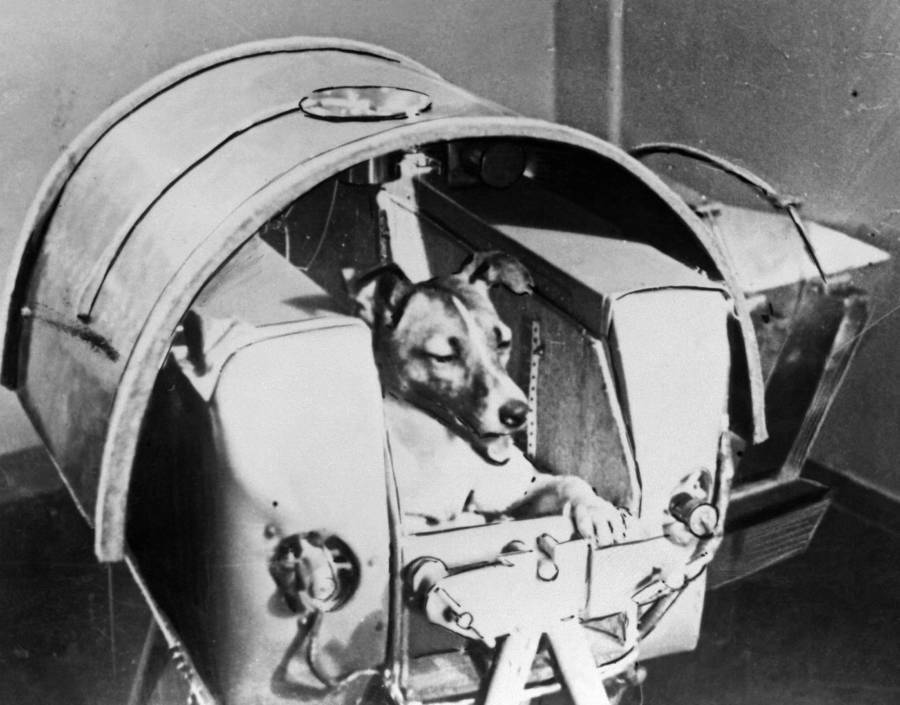 Born around 1954, Laika roamed the streets of Moscow for nearly three years before she was scooped up by the authorities. She would soon end up in the Soviet space program — where she would change history forever.

But Laika wasn’t the first animal in space. Surprisingly, that honor belonged to a group of fruit flies. These flies had been launched to an altitude of 42 miles in a V-2 rocket on February 20, 1947. Though these rockets had originally been developed in Nazi Germany, they were soon used by American military scientists — and they would help bolster the Space Race.

The 1947 launch itself aimed to study the effects of cosmic rays on living things — with the flies ultimately surviving the mission. And then, from 1948 to 1951, numerous mice and monkeys were launched by American researchers. But many of those animals died, including a monkey named Albert II who reached an altitude of 83 miles only to be killed on impact.

As for the Soviets, they sent two dogs named Tsygan and Dezik to the edge of suborbital flight at 62 miles in 1951. The dogs survived. Shortly thereafter, the U.S. successfully launched a monkey named Yorick — along with several mice — only to discover that he had died from overheating in his capsule while awaiting rescue on the ground. However, some of the mice survived.

Both the Soviet Union and the United States were determined to win the Space Race, with animals in orbit being one of the next big goals.

Why Laika The Dog Went To Space 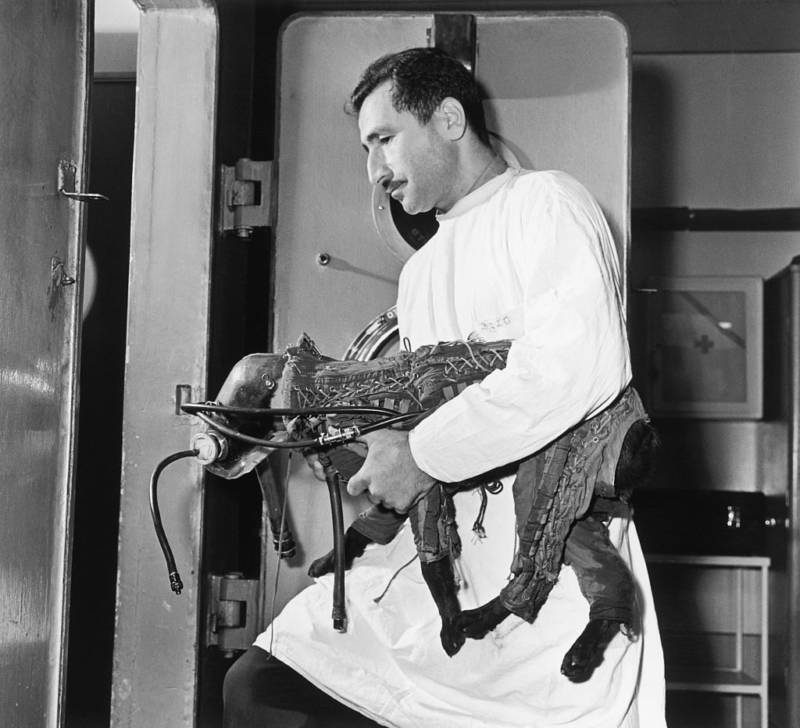 Serge Plantureux/Corbis/Getty ImagesLaika (or Muttnik) in her spacesuit, shortly before she was placed in the Sputnik 2 capsule.

Much to the chagrin of the United States, Sputnik 1 became the first satellite placed in orbit on October 4, 1957. But despite this accomplishment, Soviet leader Nikita Khrushchev demanded another “space spectacular” mission to coincide with the 40th anniversary of the Bolshevik Revolution.

With just weeks to make that happen, the Soviets hastily prepared to send an animal into orbit despite not having the technology to bring it back yet.

After designing a new pressurized capsule for the animal, the scientific team decided that Laika the dog — dubbed “Muttnik” by the American press — would be the best candidate for the mission thanks to her small size and her obedience. It was clear from the start that she would not survive the mission, but the Soviets believed that her death would be a humane one.

Soviet scientists estimated that Laika would survive for seven days in the rocket. They thought that she would then die a relatively painless death of oxygen deprivation. Either that — or she would eat the poisoned food left for her in the capsule. (But neither of those things would happen.)

Meanwhile, two other dogs were also trained for the mission. Albina would serve as Laika’s backup, and Mushka would be a “control,” used for further tests on the ground. Much of the training involved keeping the canines in progressively smaller cages during the weeks before the mission. They were also fed a nutritious gel and their vital signs were routinely monitored.

Shortly before the launch, Dr. Vladimir Yazdovsky, one of the scientists working on the mission, decided to take Laika home to play with his children. Yazdovsky later said: “Laika was quiet and charming. I wanted to do something nice for her. She had so little time left to live.”

Laika was placed in the capsule three days before liftoff. She wore a spacesuit with restraints built into it, as well as sensors to monitor her body. And she barely had any room to move. Alone, confused, and terrified, Laika was sent to space at 5:30 a.m. local time on November 3, 1957.

When her rocket lifted off, Laika’s heartbeat shot up to triple the normal rate, and her breath rate quadrupled. She made it to orbit alive and circled the Earth in 103 minutes — but her good luck would end there. Though scientists thought the dog would survive for a week, her capsule soon began overheating and eventually rose to unbearable temperatures.

Tragically, Laika would succumb to overheating and stress in a matter of hours — which the Soviets immediately tried to cover up. 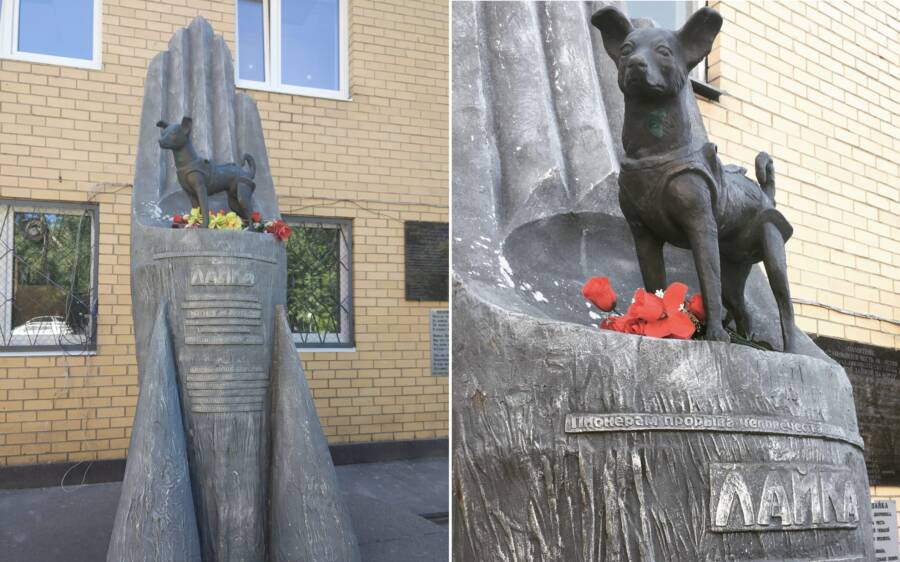 Left: @madnur.hidayat/Instagram; Right: @lauralkite/Instagram Though Laika the dog was hailed a Soviet hero, she didn’t get her own monument in Moscow until 2008.

During and after Laika’s doomed trip to space, the Soviets claimed that she had survived for several days on the rocket and implied that her death had been humane in contemporary broadcasts and even official documents. The truth was so muddled that the American press even reported at one point that she might survive — unaware that she was already dead.

The Soviets only clarified that she had died nine days after the fact and continued to imply that she had lived far longer than she actually had.

It wasn’t until 1993 that Oleg Gazenko, one of Laika’s space dog instructors, revealed that the canine had actually died soon after the rocket took off. “The more time passes, the more I’m sorry about it,” he later said.

And in 2002, scientist Dimitri Malashenkov provided even more heartbreaking details — the dog had died from overheating and panic caused by a faulty and quickly-designed temperature control system — and not because she had eaten her poisoned last meal, as initially believed.

The revolutionary new ship didn’t survive, either. Sputnik 2 disintegrated after it reentered Earth’s atmosphere on April 14, 1958. The debris left behind landed somewhere in the Amazon region of South America.

Still, Laika’s tragic mission paved the way for further advances in spaceflight, especially Gagarin’s historic 1961 mission, which saw him return safely to Earth. Years later, Gargarin pondered his connection with Laika and the other animals who preceded him as the first human in outer space.

“I am still unaware who I am,” Gagarin said, “The first man or the last dog.”

Though Laika posthumously became a celebrity, many modern Russians wanted to honor her in a more substantial way. So in 2008, a monument of Laika was installed near a military research station in Moscow. Shaped like a rocket at the bottom and a hand at the top, it holds a stone depiction of the dog — in the same city where she spent most of her tragically short life.

After learning about Laika the space dog, read about Félicette, the first cat to become an astronaut. Then, check out Ham, the first chimpanzee in space.