Supreme Court Declares That Half Of Oklahoma Is Native American Land

More than 150 years ago, the U.S. government signed two treaties granting land to the Muscogee tribe. Now, the Supreme Court is holding America to its word.

According to a landmark Supreme Court decision, about half of Oklahoma is technically Native American land — and has been for more than 150 years.

On July 9, 2020, the justices declared that most of the state’s eastern half falls within an Indian reservation, leaving Oklahoma’s government concerned about the impending fallout of this historic finding. While no land has changed hands in terms of ownership or overall governmental authority, the decision will have large-scale consequences in certain key areas of governance.

For many years, two cases — McGirt v. Oklahoma and Sharp v. Murphy — had been making their way through the U.S. legal system. In each case, a Native American man accused of a crime in Oklahoma argued that, because the crimes took place on what they claimed was Native American land, only a federal or tribal court could try them.

American law indeed holds that crimes committed by tribespeople on reservation land must be tried in federal courts, as opposed to state or local courts. The question before the Supreme Court was whether or not the Oklahoma land in question was indeed reservation territory.

Now, the Supreme Court has ruled on McGirt v. Oklahoma and declared that much of Oklahoma’s eastern half is in fact technically Native American land. In both this case and Sharp v. Murphy, the accused held that the U.S. government promised this land to the Native Americans in multiple treaties signed during the mid-19th century — which the Supreme Court has now upheld.

During the Trail of Tears throughout the mid-1800s, President Andrew Jackson and those that followed forced some 60,000 Native Americans off of their native lands in the southeastern U.S. and onto reservations largely in present-day Oklahoma.

According to an 1832 treaty between the Muscogee tribe and the U.S. government, much of the land in question belonged to the Muscogee. Another treaty in 1866 gave the Muscogee authority over more than 3 million acres of Oklahoma.

Muscogee man Patrick Murphy pointed to these facts in claiming that Oklahoma state courts had no right to try him. Murphy’s case began more than 20 years ago. On Aug. 28, 1999, he murdered his girlfriend’s ex-husband and cut off his genitals. He was subsequently tried by a state court and sentenced to death.

In a 2004 appeal, Murphy’s public defender argued that the murder occurred on Native American reservation territory. Thus, the state court had no right to try Murphy for his crimes — only the federal government did.

In 2017, a federal circuit court sided with Murphy, but the state of Oklahoma appealed. The case then effectively stalled in the Supreme Court, while the similar case of McGirt v. Oklahoma made its own way through the system. 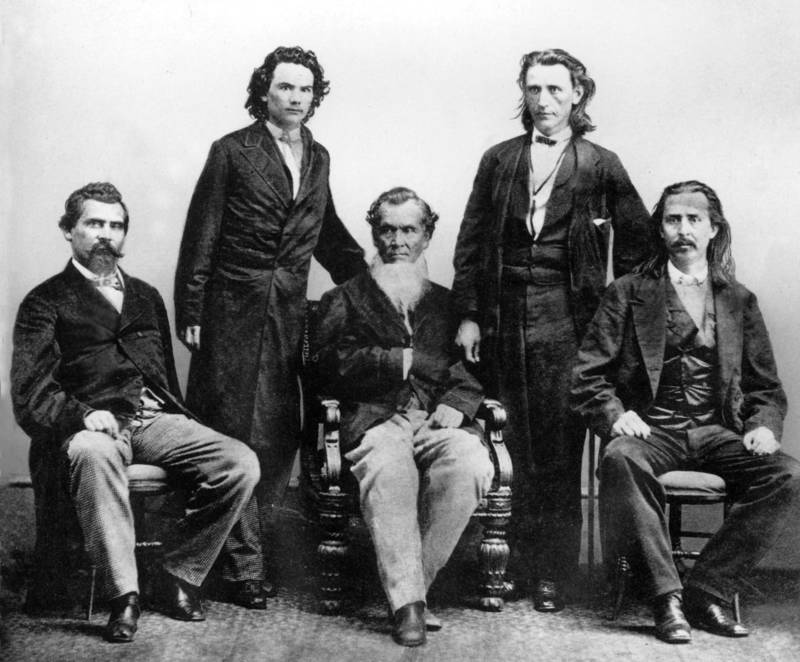 Apic/Getty ImagesThe Cherokee delegates who negotiated the 1866 treaty with the U.S. government in Washington, D.C.

Jimcy McGirt, a Seminole man in Oklahoma, was convicted in a state court for sex crimes committed in 1996. Finally, last year, his case made it to the Supreme Court on the same grounds as Murphy’s — that only a federal or tribal court could actually try him.

In a 5-4 vote, the Supreme Court has now sided with McGirt.

“Today we are asked whether the land these treaties promised remains an Indian reservation for purposes of federal criminal law,” Justice Neil Gorsuch wrote. “Because Congress has not said otherwise, we hold the government to its word.”

Gorsuch continued, “On the far end of the Trail of Tears was a promise. Forced to leave their ancestral lands in Georgia and Alabama, the Creek Nation received assurances that their new lands in the West would be secure forever.”

As Gorsuch states, the largest concrete effect of the ruling is that tribespeople on this land will be subject to federal and not state law. But the underpinning of the decision is nevertheless that the land is technically an Indian reservation.

According to Jonodev Chaudhuri, an ambassador for the Muscogee Nation, “Not one inch of land changed hands today. All that happened was clarity was brought to potential prosecutions within Creek Nation.”

Still, this represents the most significant restoration of tribal jurisdiction over Native American land in U.S. history. And the Muscogee aren’t the only tribe to have their authority restored.

The Cherokee Nation, for instance, had lost 74 percent of its treaty land, according to Cherokee citizen Rebecca Nagle, who wrote an op-ed for the Washington Post in 2018:

Today, we still lose land every time an acre is sold to a non-Indian, inherited by someone less than half blood quantum, or even when an owner lifts restrictions to qualify for a mortgage.

After a century of the legal status quo, the Cherokee Nation has jurisdiction of only 2 percent of our land left after allotment. While the initial hemorrhage of land loss occurred in previous centuries, we are still bleeding. 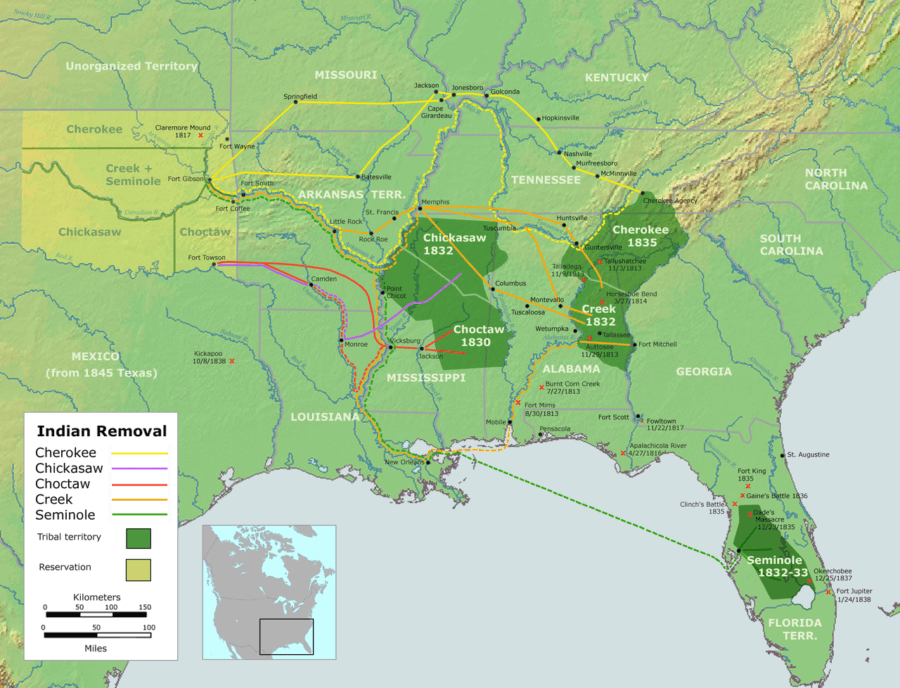 Wikimedia CommonsMap showing the forced resettlement of various Native American tribes, including the Cherokee, in the 1830s.

But now, the so-called Five Tribes — the Cherokee, Chickasaw, Choctaw, Muscogee, and Seminole — have gained certain legal jurisdiction over the ten percent of the population that is Native American in about half of Oklahoma’s land.

The lawyers working on behalf of the state in the Murphy case argued that Oklahoma would see a “dramatic” shift as hundreds of cases could be overturned, perpetrators could walk free, and huge amounts of potential tax revenue would be uncollectable.

But as Nagle said, “reservations comprise 27 percent of the land in Arizona, and it functions just fine,” alluding to the fact that tribal jurisdiction over large chunks of state land doesn’t mean that the state will collapse.

Exactly how state operations will be affected remains to be seen. But the tribes have won at least a partial victory in officially regaining certain jurisdiction over the land they were promised more than 150 years ago.

Next, read about the mythical Native American creature known as the Wendigo. Then, take a look at some of the most stunning Native American portraits taken by Edward Curtis.