In 1910, Halley’s Comet was due to pass close by Earth — and everyone from religious fanatics to news reporters stoked the fires of a global panic, believing it was the end of the world. 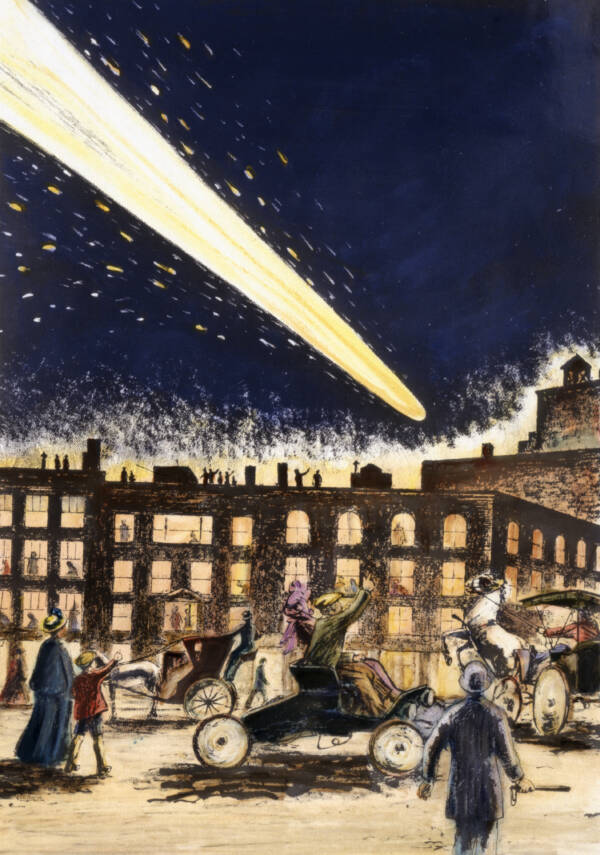 Bettmann/Getty ImagesA 1910 drawing of Halley’s Comet passing over a city.

In 1705, the English astronomer Edmond Halley predicted that a bright comet would return to Earth in 1758. Halley applied Isaac Newton’s laws of motion to the comet, picking the exact week it would appear in the sky. When the comet arrived on schedule, it became known as Halley’s Comet, although Edmond Halley didn’t live long enough to see his prediction come true.

The comet reappeared in 1835 and again in 1910. But the 1910 visit of Halley’s Comet was different — because scientists warned that the comet could end life on Earth.

“Will Coming Comet Collide With Earth?” asked a 1907 Kentucky newspaper. Scientists informed worried Earthlings that the comet would not smash into the planet. But the news about Halley’s Comet wasn’t all reassuring.

The French scientist Camille Flammarion warned that Earth would pass through the comet’s tail. According to Flammarion, there was a chance that “cyanogen gas would impregnate the atmosphere and possibly snuff out all life on the planet.” 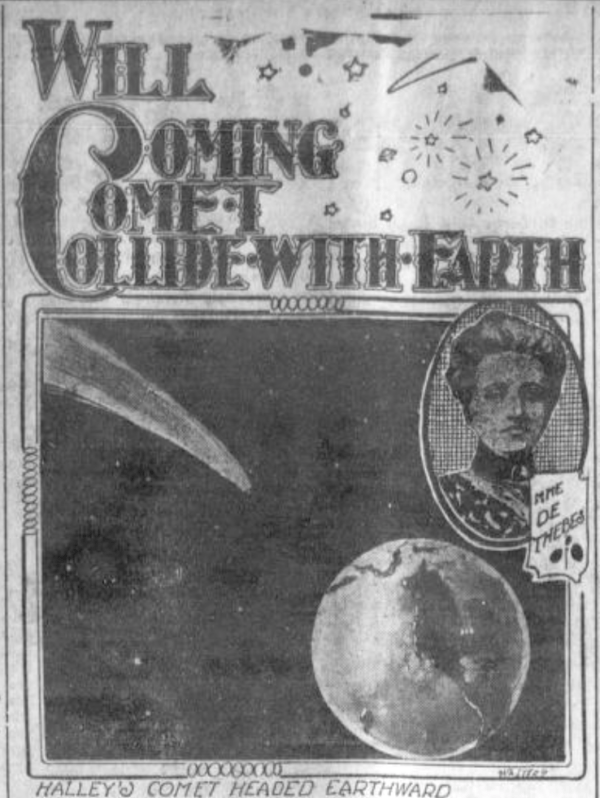 Library of CongressA 1907 Kentucky paper wondered if the comet would smash into the Earth.

“Cyanogen is a very deadly poison,” the New York Times helpfully pointed out. “A grain of its potassium salt touched to the tongue [is] sufficient to cause instant death.”

Flammarion’s warning set off a panic that swept the globe.

The Ogden Standard warned of “Coming End of World,” followed by Flamillion’s warning that “Halley’s Comet May Snuff Out Life on the Earth.”

The San Francisco Call reported, “Comet May Kill All Earth Life Says Scientist.” The paper put its hope for the survival of the species on the fact that “most astronomers do not agree with Flammarion,” noting, “the tail of the comet is of almost inconceivable rarification.” In short, the cyanogen gas was too dispersed to impregnate the entire atmosphere.

The scientific debate didn’t stop less scrupulous people from taking advantage of the situation. Suddenly, anti-comet pills flooded the market. One promised to serve as “an elixir for escaping the wrath of the heavens.”

Gas masks became best-sellers and some even bought up “comet-protecting umbrellas.”

The situation grew so bad that police arrested two Texans for selling sugar pills as comet remedies. Yet demand for comet cures was so high that police reluctantly released the snake-oil salesmen.

What effect would the comet have? A letter to the Royal Observatory worried whether the comet could “cause the Pacific to change basins with the Atlantic, and the primeval forests of North and South America to be swept by the briny avalanche over the sandy plains of the great Sahara, tumbling over and over with houses, ships, sharks, whales, and all sorts of living things in one heterogeneous mass of chaotic confusion.”

Chaotic confusion was the order of the day as the Halley’s Comet approached in 1910.

The Long History Of Killer Comets

Killer comets were nothing new in the early 20th century. Around 700 A.D., the Venerable Bede warned that comets “are born suddenly, portending a change of royal power or plague or wars or winds or heat.”

In England, 1066 became known as the Year of Three Kings, when three all claimed their right to the throne — and Halley’s Comet appeared that same year, convincing many that Bede was right.

The comet of 1664/1665 was quickly followed by a plague outbreak in London and the Great Fire of London, which Europeans saw as more than mere coincidence. 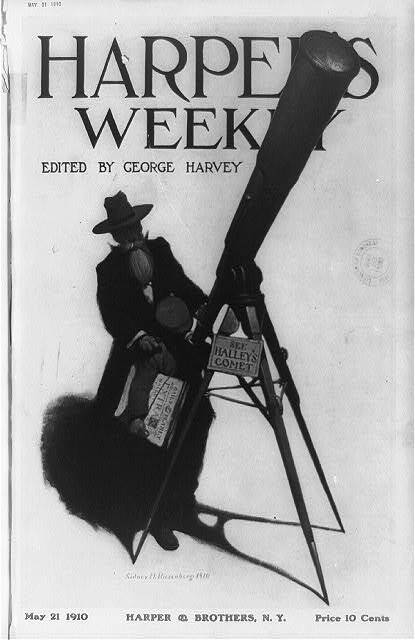 Library of CongressOn the cover of Harper’s Weekly, a newsboy turns a telescope toward the comet.

Another comet appeared in 1680. In Boston, the preacher Increase Mather declared that “fearful sights and signs in heaven are the presages of great calamities at hand.” If men ignored “Heaven’s alarm to the world,” God’s anger might strike them down.

But Halley’s Comet in 1910 was different from these earlier appearances. This time, scientists were the ones warning about the possibility of doom.

The Arrival Of Halley’s Comet in 1910

On April 20, 1910, people first spotted Halley’s Comet approaching Earth. Would the comet destroy life? Would it portend a change in royal power, as Bede had predicted? Earth waited with bated breath.

On May 6, 1910, with the comet bright in the sky, England’s King Edward VII died in his bed. Had the comet claimed its first victim?

Halley’s Comet would travel closest to Earth on May 18, 1910. Worried people looked to the skies and counted down their last days. Some women even stuffed cloth in their door frames to block the deadly cyanogen gas. 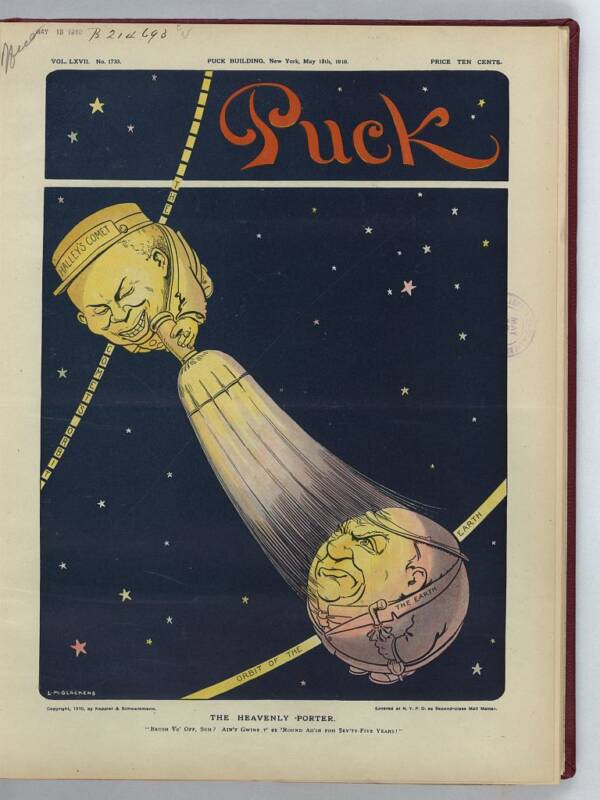 Keppler & Schwarzmann/Library of CongressPuck Magazine portrayed the comet as a “Heavenly Porter” sweeping over the Earth (holding a comet-proof umbrella).

“Terror occasioned by the near approach of Halley’s comet had seized hold of a large part of the population of Chicago,” the New York Times reported on May 18.

And New York wasn’t immune. “Some of the more superstitious in the sections largely inhabited by foreigners were on the verge of panic,” the paper related. “Many prayed on bended knees in the streets and parks.”

Across the Atlantic in France, crowds gathered to watch the world end. And yet the comet passed by without snuffing out life. Earth had escaped the comet’s wrath.

Flammarion refused to admit defeat, however. The scientist proclaimed that several observers “had certain olfactory experiences, which are described variously as a smell of burning vegetables, or a marsh, or of acetylene.”

The Lessons Of The 1910 Halley’s Comet Panic

It’s easy to look back at the 1910 Halley’s Comet panic and dismiss the fears as superstitious. Yet unlike earlier comet panics, the 1910 panic was backed by science.

With Flammarion warning about cyanogen gas suffocating life on Earth, it’s no surprise many ran out to buy gas masks. 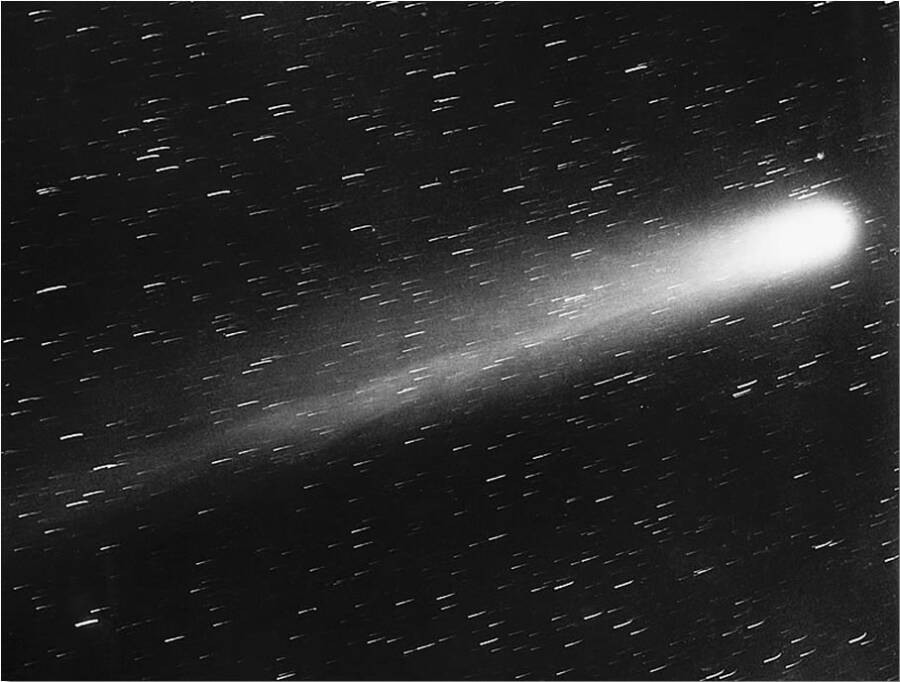 And 1910 wasn’t the last time people panicked about a comet. When the Hale-Bopp comet reached Earth in 1997, members of the Heaven’s Gate cult committed mass suicide to ascend to an alien spacecraft they believed was hidden behind the comet.

When the comet NEOWISE appeared in March 2020, conspiracy theorists blamed the COVID-19 pandemic on the comet.

What will Halley’s Comet bring when it next circles past the Earth in 2062? Only time will tell.

Prepare for the next comet by reading up on history’s most famous hoaxes. Then learn more about what drove the Heaven’s Gate cult to mass suicide.