The Crimes Of Thomas Neill Cream, The Victorian Doctor Who Killed His Patients

Dr. Thomas Neill Cream left a trail of victims across London and Chicago before he was executed in 1892. And some believe he may have been the infamous Jack the Ripper. 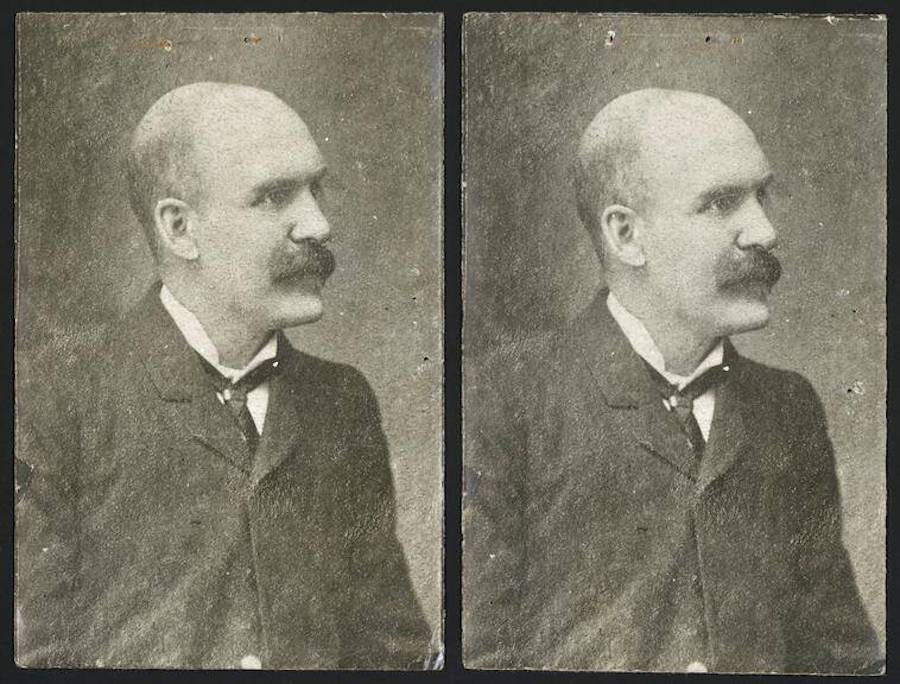 Dr. Thomas Neill Cream thought police could never catch him. So, in 1892, he offered to show a detective around the sites of London’s latest grisly prostitute murders. Suspicious, the detective tipped off Scotland Yard, which connected the crimes to Cream himself.

After a killing spree that crossed oceans, Cream found himself facing the gallows. Thousands flocked to Newgate Prison in the City of London to see Dr. Cream hang. And the doctor made one final confession before he died.

As the noose tightened around his neck, Cream cried out, “I am Jack–”

His death cut off the killer’s final words. Was Cream confessing to the most brutal killings in London’s history? Could Thomas Neill Cream, the murderous doctor, have been Jack the Ripper? 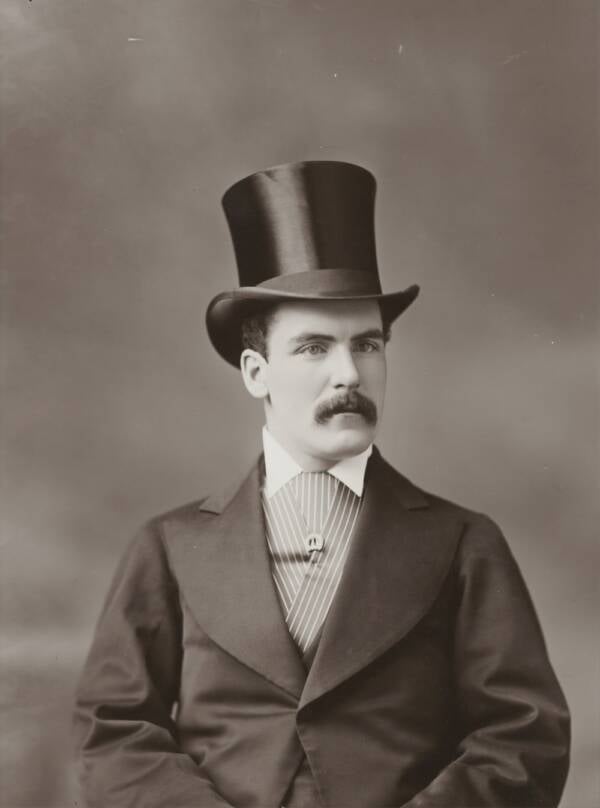 Born in Scotland in 1850, Thomas Neill Cream left Glasgow behind as a child when his family moved to Quebec. After apprenticing as a shipbuilder, Cream made a drastic career change. In 1872, he became a medical student at McGill University in Montreal.

At McGill, He studied the effects of chloroform. Cream recognized the power of the anesthetic, which could knock out patients – or kill.

Scandal chased Dr. Cream from early in his career. When one of the doctor’s paramours fell pregnant, Cream performed an abortion that left the woman ill. Her father pulled a gun on Cream and forced the couple to marry.

Not interested in married life, Cream left Canada for London, where he ignored his wedding vows. His wife soon died, leaving her doctor suspicious that Cream might have somehow murdered her from across the Atlantic.

When Cream returned to Canada as a single man, he set up a clinic in Ontario performing illegal abortions.

A Doctor Who Killed In Canada and Chicago 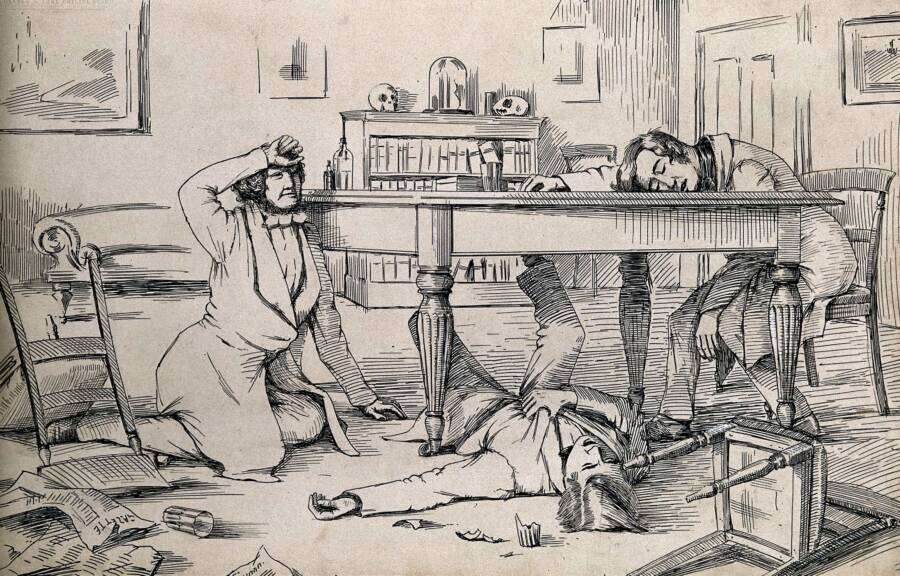 Wellcome LibraryChloroform had a strong effect on people, as Dr. Cream knew from his medical school days.

Kate Gardner was one of Thomas Neill Cream’s patients. In 1879, police found her body behind Cream’s building. A bottle of chloroform rested next to her.

Cream admitted that he had consulted with the young woman about an abortion but denied giving her chloroform.

A jury investigating the death declared that Gardner “died from the effects of chloroform administered to her by person or persons unknown.” They rendered a guilty verdict.

But before the authorities could track down Cream, he left Ontario for Chicago. 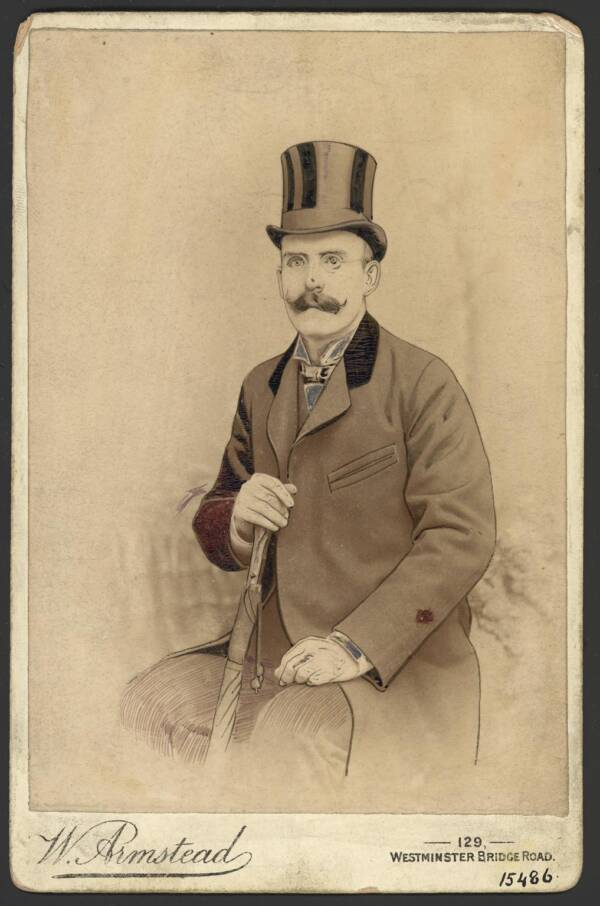 Science Museum Group Collection
Dr. Cream claimed victims in Canada, the U.S., and Britain. Most of his crimes took place in Chicago and London.

Chicago offered new opportunities for the doctor. He opened a new clinic near the city’s brothels, offering abortions to prostitutes. Several more of Cream’s patients died, but police barely investigated the deaths.

On the side, Cream began an affair with Julia Stott, a married woman whose husband bought the doctor’s “epilepsy curing” pills.

Cream and Stott plotted against her husband, convincing him to take out a life insurance policy. Then, Cream handed Stott the murder weapon: pills full of strychnine. 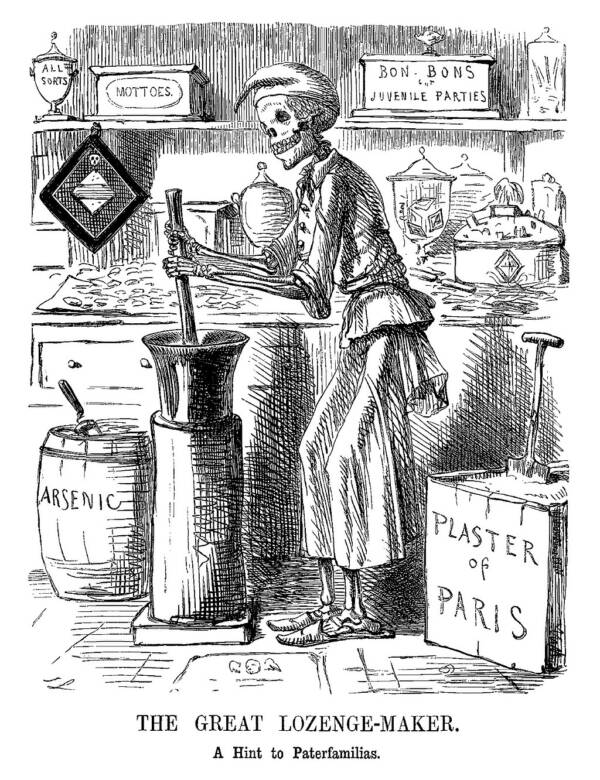 When Stott’s husband died with three times the lethal dose of strychnine in his blood, police finally paid attention. Cream had prepared for the possibility. The man’s death was an opportunity, in Cream’s twisted mind.

The doctor wrote a letter to the coroner blaming the chemists who’d prepared the dead man’s prescription. It was all part of Cream’s plan – he would sue the chemists for $5,000 and collect money on behalf of his mistress. 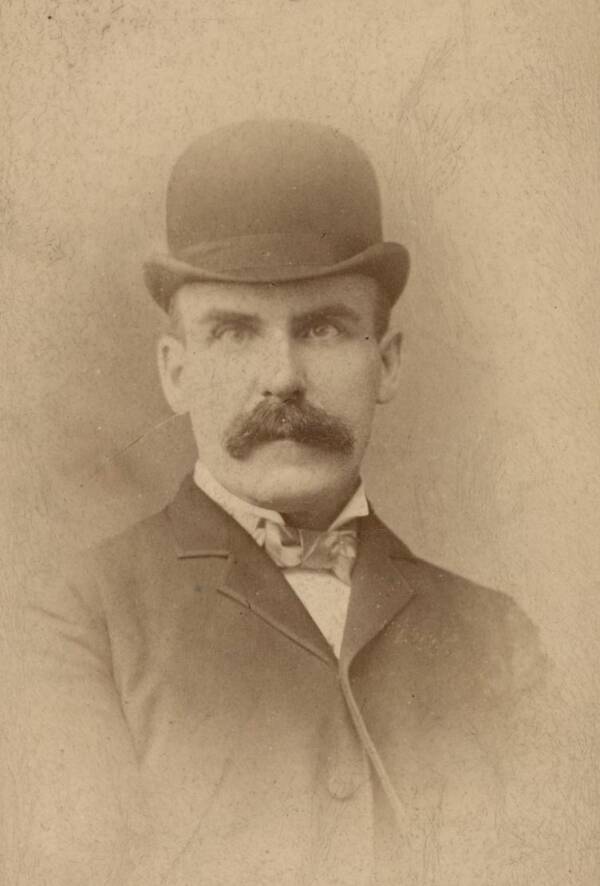 Ironically, Cream might have gotten away with the crime if he hadn’t pushed his side hustle so hard. When the coroner ignored the doctor’s letter, Cream insisted the district attorney exhume the dead man’s body, but by that point, his relationship with Julia Stott has soured. That spelled Cream’s doom.

Stott told the police she suspected Cream has tampered with the pills. Cream was arrested and sent to Joliet Prison on a life sentence for murder in 1881.

Thomas Neill Cream never finished the life sentence. His brother somehow managed to secure his early release by 1891, and Cream returned to London. 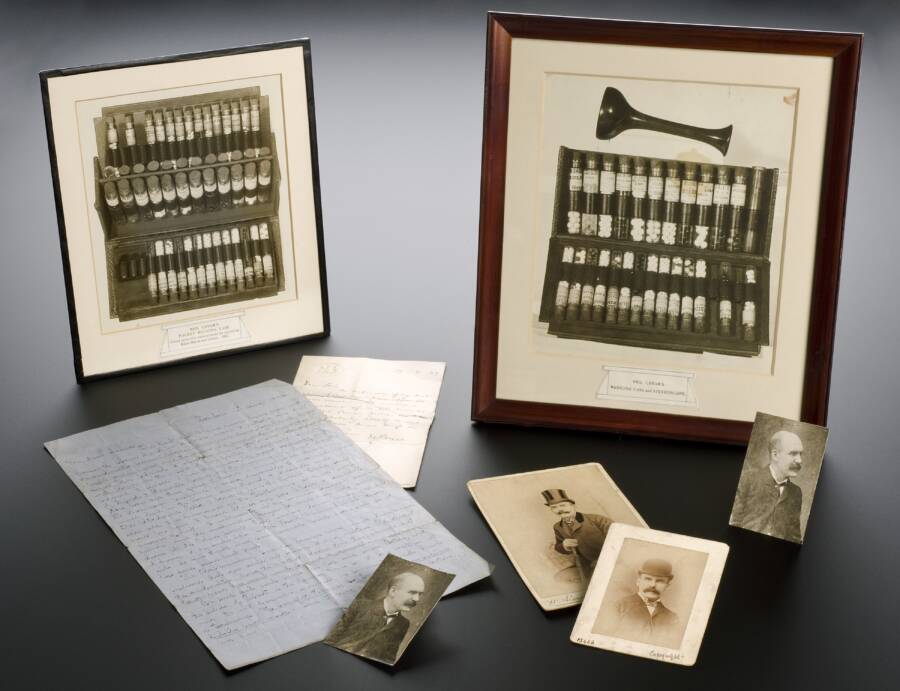 Science Museum, London/Wellcome ImagesCream tried to escape suspicion by pinning his crimes on others. He mailed letters to innocent people as an extortion scheme.

In a seven-month period, Cream poisoned four prostitutes in Lambeth with strychnine pills. Once again, Dr. Cream’s greed sealed his fate. He sent letters accusing others of the crimes in an extortion scheme. And Cream befriended New York detective John Haynes and offered to give him a tour of where each prostitute died.

Haynes turned the police onto Cream. The murderous scheme unraveled and landed Cream in prison. He also earned the moniker “The Lambeth Poisoner.”

During the trial, one of Cream’s intended victims testified against him. Cream had offered her pills which she refused to take – a choice that saved her life.

After deliberating for only ten minutes, the jury found Thomas Neill Cream guilty. With his execution date quickly approaching, Cream confessed that he’d killed many other women and escaped justice. 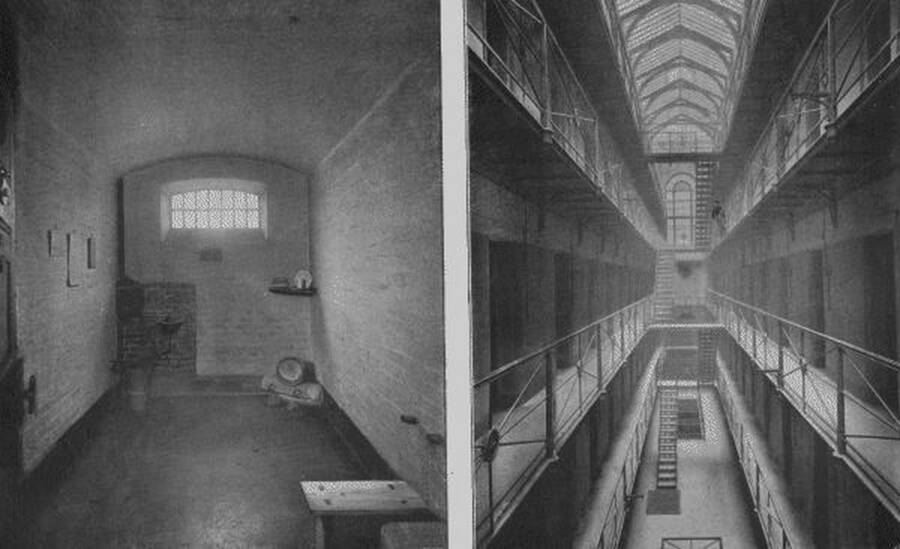 Thomas Neill Cream went to the gallows on Nov. 15, 1892. “Probably no criminal was ever executed in London who had a less pitying mob awaiting his execution,” reported The Toronto Globe.

Executioner James Billington recorded Cream’s last words. With a noose around his neck, the killer said, “I am Jack–”

Was Cream confessing to the Jack the Ripper killings from 1888? If so, there’s one big problem with the confession. Cream was supposedly in Joliet Prison in Illinois when the Ripper slaughtered his victims.

Unless Cream used his wealth to bribe the guards to release him early – a plausible possibility, according to those familiar with the 19th-century prison system. After all, Cream received a substantial inheritance in 1887 when his father died. He could have used the money to bribe his jailors. 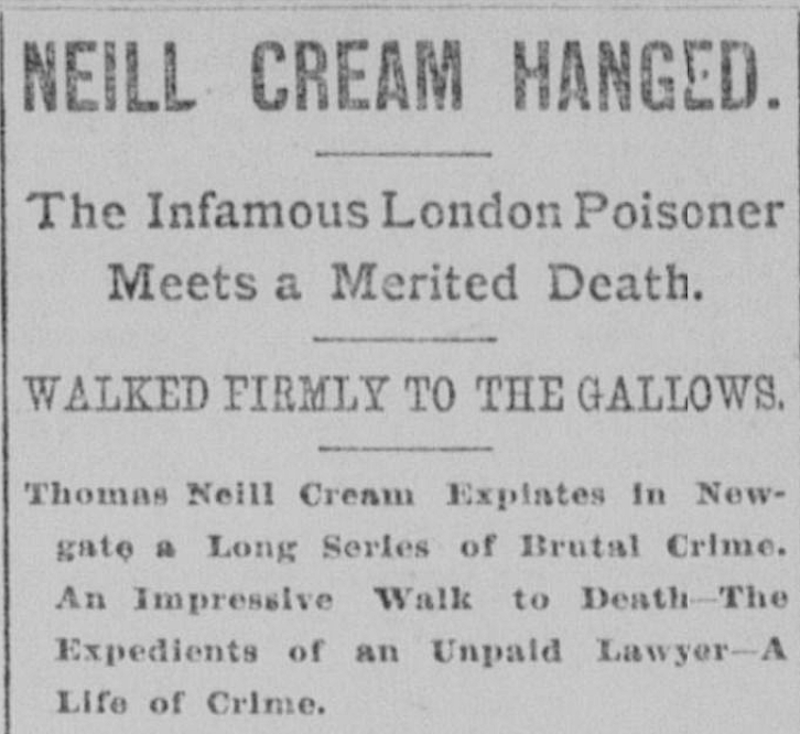 Still, the evidence for Dr. Cream as the Ripper remains largely circumstantial. Both men targeted London’s prostitutes, though Cream killed several prostitutes before the Ripper killings. Detectives suspected the Ripper had medical training. And Cream, like the Ripper, wrote letters about his crimes.

Cream also fit the most detailed physical description of the Ripper. Like the Ripper, he sported a Victorian mustache – and both dressed fashionably. The Ripper had an expensive watch and a horseshoe pin. So did Cream.

Yet prison records place Cream halfway around the world when Jack the Ripper terrorized London. It’s also possible that the executioner invented the last words to make money off of London’s most famous serial killer.

Whether Thomas Neill Cream was the Ripper or not, he was part of a new breed of serial killers who used brutal ways to kill their victims. And his true victim count will likely remain a mystery.

After reading about how Thomas Neill Cream may have been Jack the Ripper, learn more about other Jack the Ripper suspects. Then read about America’s first serial killer.