The Life And Death Of Mary Ann Nichols, Jack The Ripper’s First Victim

Mary Ann Nichols' murder in the Whitechapel neighborhood of London on August 31, 1888 sent the city into a panic — but it was just the beginning of Jack the Ripper's infamous killing spree. 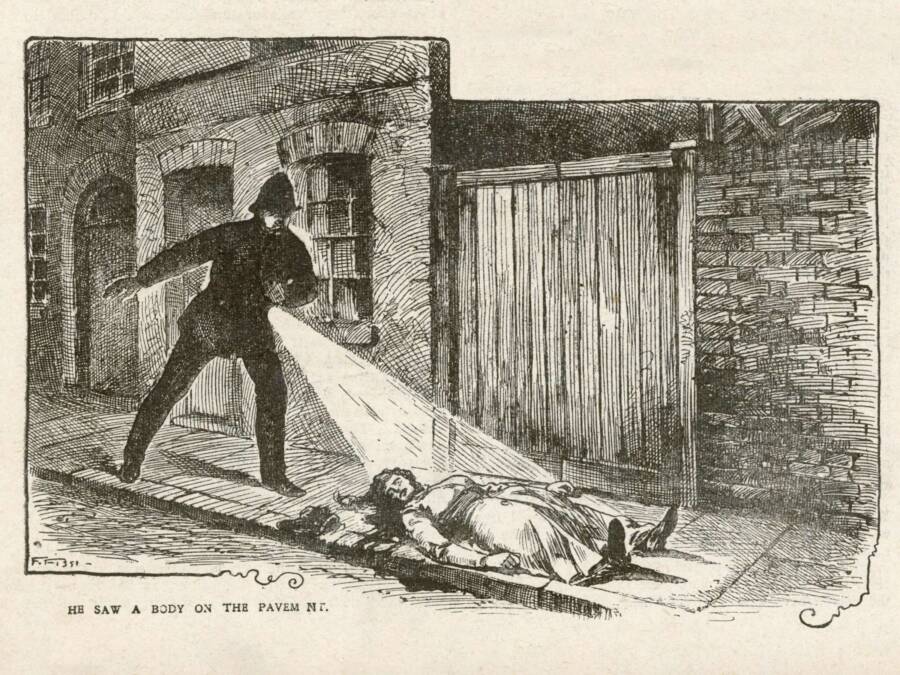 Wikimedia CommonsMary Ann Nichols’ body was found on Buck’s Row in the East London neighborhood of Whitechapel around 3:40 a.m.

No one heard her scream. But in the early hours of Aug. 31, 1888, police came across the mutilated body of Mary Ann Nichols. Though Nichols’ gruesome death horrified residents of Whitechapel, London, her murder was just the beginning.

Over the next two months, four more women turned up dead in a similar fashion. And before long, the killer offered up a name for himself: Jack the Ripper.

So who was Mary Ann Nichols, Jack the Ripper’s first known victim?

The Troubled Life Of ‘Polly’ Nichols 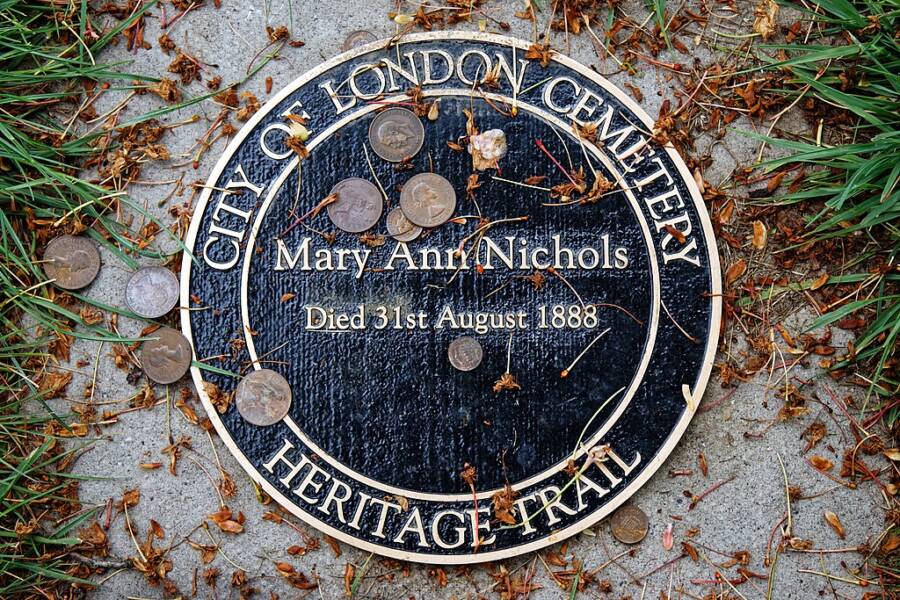 Acabashi/Wikimedia CommonsMary Ann Nichols’ grave marker in the City of London Cemetery. She was buried Sept. 6, 1888 at the age of 43.

Born on Aug. 23, 1845, in the Soho neighborhood of London, Mary Ann Nichols (neé Walker) had a short and troubled life.

Her 16-year marriage ended bitterly in 1880 when Nichols accused her husband of infidelity. Her husband, however, called his wife a drunk and alleged that she’d left him on several occasions.

For the next eight years, Nichols bounced between workhouses, public lodgings, her father’s house, and the homes of various lovers. In 1881, her husband claimed that Nichols was living an “immoral life” — he may have meant prostitution — and stopped paying her the allowance she was due.

Nichols scraped by on the street. When she had enough money, she stayed in lodging houses across in London. One of her roommates remembered “Polly Nichols” as “very clean” but “melancholy.” The roommate also noted that she’d seen Nichols “the worse for drink once or twice.”

By 1888, Nichols had succumbed to her alcoholism. She drifted through life, relying on prostitution to earn enough money for a bed at a lodging house.

Tragically, Mary Ann Nichols would soon drift across the path of Jack the Ripper.

Mary Ann Nichols spent her last evening alive like she’d spent many others: getting drunk. After drinking at the Frying Pan Pub in East London, Nichols returned to her lodging home. But she didn’t have enough money to get inside. 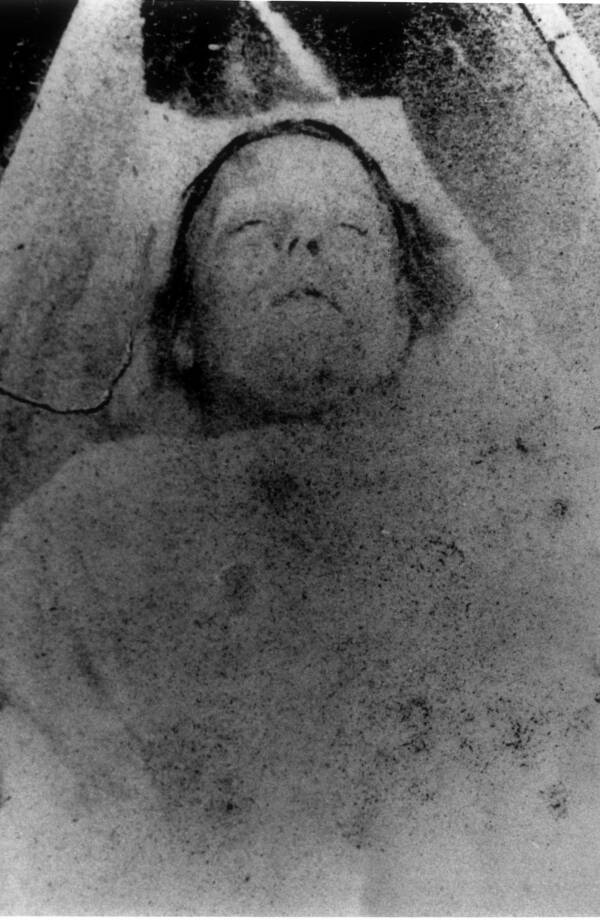 Undeterred, Nichols pointed to her straw bonnet, trimmed with black velvet. “Never mind,” she said. “I’ll soon get my doss money. See what a jolly bonnet I’ve got now.”

At 1:20 a.m., she set off into the night. A little over an hour later, Nichols crossed paths with her roommate, Emily Holland. Holland tried to convince Nichols to return with her, to no avail.

“I’ve had my doss money three times today and spent it,” Nichols exclaimed. At the time, Nichols could have made about three shillings by prostituting herself. A glass of gin cost the same. She added: “It won’t be long before I’m back.”

That was the last time anyone saw Mary Ann Nichols alive. No one knows exactly what happened in the next hour, except that Nichols met Jack the Ripper.

Around 3:30 a.m., a pair of delivery drivers came across Mary Ann Nichols’ slumped form on Buck Row. Though unsure if she were dead or alive, they decided to head to work and notify any police that they found. Police Constable John Neil soon arrived on the scene.

“There was not a soul about,” he later said. “I examined the body by the aid of my lamp, and noticed blood oozing from a wound in the throat. She was lying on her back, with her clothes disarranged. I felt her arm, which was quite warm from the joints upwards.

“Her eyes were wide open. Her bonnet was off and lying at her side.”

Jack the Ripper had claimed his first victim. Police didn’t notice until about an hour later that he had disemboweled Nichols in addition to cutting her throat.

The Legacy Of Jack The Ripper’s First Victim 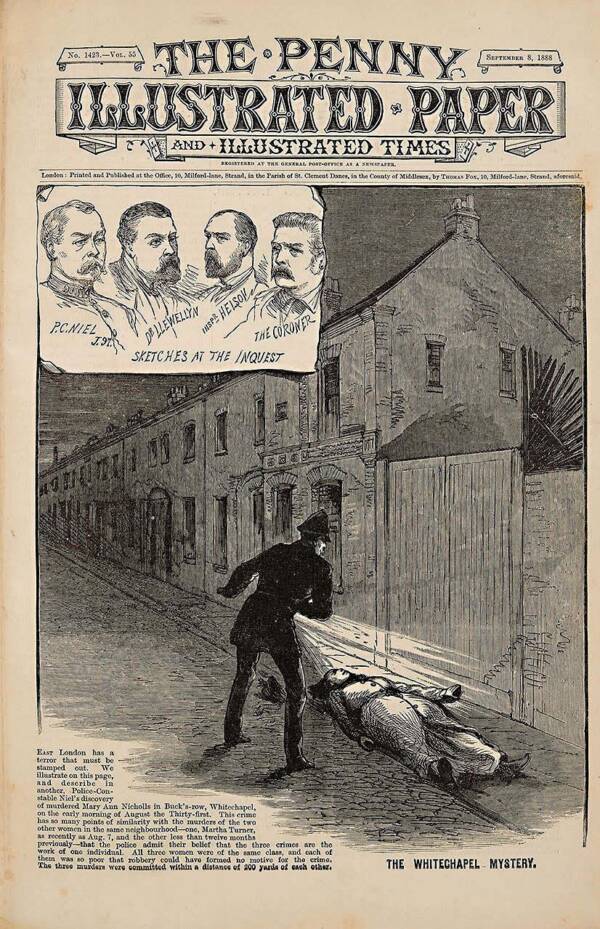 Wikimedia CommonsA depiction of the murder in The Penny Illustrated, September 1888.

The death of Mary Ann Nichols shocked the community of Whitechapel. But her killer was just getting started. In September alone, Jack the Ripper killed three more victims: Annie Chapman, Elizabeth Stride, and Catherine Eddowes.

In November, Jack the Ripper took what many believe is his last victim: Mary Jane Kelly. Those five women are considered Jack the Ripper’s canonical victims — although it is possible he killed others.

Despite his violent crimes and his taunting messages to investigators, Jack the Ripper was never caught, nor definitively identified.

In that way, no one can ever know for sure what happened to Mary Ann Nichols in her final moments. But her ex-husband summed up her life, and death, after he identified her body.

“Well, there is no mistake about it,” he said, looking “ashy white” according to Lloyd’s Newspaper. “It has come to a sad end at last.”

After reading about Mary Ann Nichols, learn about murderess Mary Pearcey whom some suspect could have been Jack the Ripper. Or, learn about costume designer Willy Clarkson, who may have helped disguise the killer.