Inside Devil’s Island, The Most Feared Prison In Modern History

From 1852 to 1953, the inmates of France’s infamous Devil’s Island penal colony in the Caribbean died en masse from malnutrition, disease, and futile escape attempts. 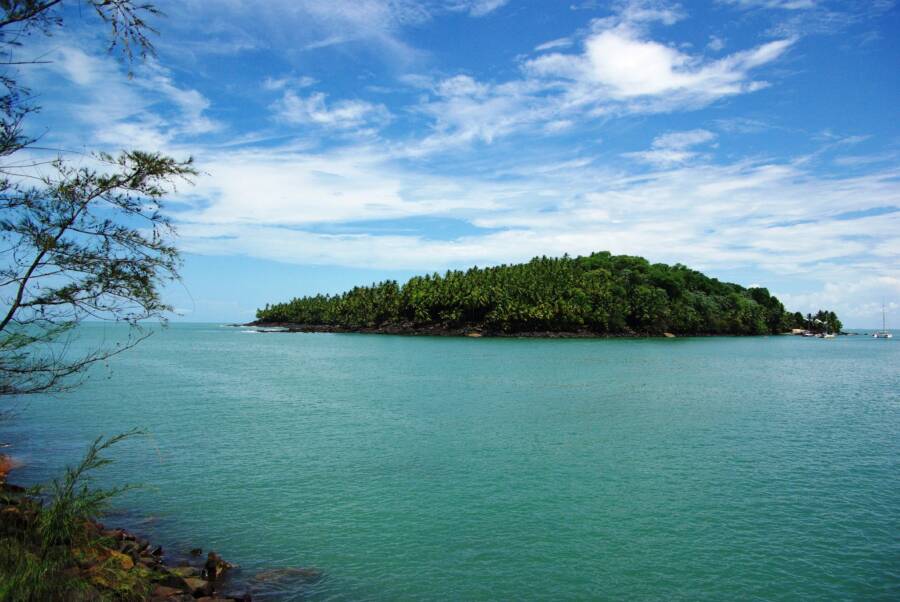 At first glance, Devil’s Island looks like paradise. Dotted with palm trees and surrounded by sparkling waters, its beauty belies a horrific truth — for nearly 100 years, tens of thousands of men perished on its shores while living in a French penal colony.

From 1852 to 1953, Devil’s Island — which actually encompasses three islands off the coast of French Guiana and a slice of Cayenne — housed French prisoners. Their crimes ranged from offending Napoleon III to murder. But some, like French soldier Alfred Dreyfus, hadn’t done anything at all.

Nevertheless, they all suffered equally. The men imprisoned at Devil’s Island endured rampant diseases, malnutrition, and mistreatment by guards. Few ever returned to France.

This is the story of Devil’s Island, one of the world’s most brutal penal colonies.

The Creation Of Devil’s Island

Before becoming a penal colony, Devil’s Island was seen as a place of salvation — literally. In the 1760s, French settlers decimated by yellow fever sought refuge on the trio of islands eight miles off the shore of French Guiana. 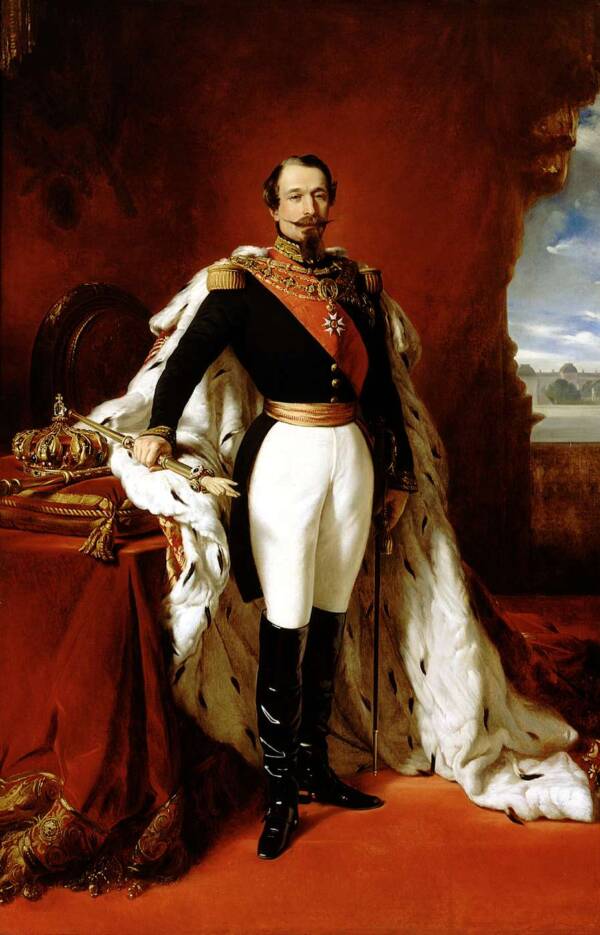 Wikimedia CommonsNapoleon III seized power in 1851 and sent many of his political enemies to Devil’s Island.

They named them Île Royale for their king, Île St Joseph for the protection of a saint, and Île du Diable because of the shark-infested waters. They dubbed the small archipelago Îles du Salut, the Salvation Islands.

Napoleon III sought to solve several problems with Devil’s Island. First, he wanted to get rid of anyone who had opposed his December 1851 coup d’état. He sent prisoners to Devil’s Island just days after seizing power — including 239 republicans who had resisted his power grab.

However, Napoleon III didn’t send prisoners to Devil’s Island merely out of spite. The penal colony had several other advantages to the French government as well.

First and foremost, it would remove dangerous criminals from the country. Secondly, the convicts could help jumpstart the lagging colonization of French Guiana. And finally, they provided inexpensive labor as a replacement to the enslaved population in the colony, which France had freed in 1848.

Life In The Caribbean Penitentiary

Before arriving at Devil’s Island, prisoners first had to survive the crossing. Not all did. The men were locked in cages together and often broke out into fights which left one or more dead. Ship officials also used steam and sulfur to punish anyone who disobeyed orders. 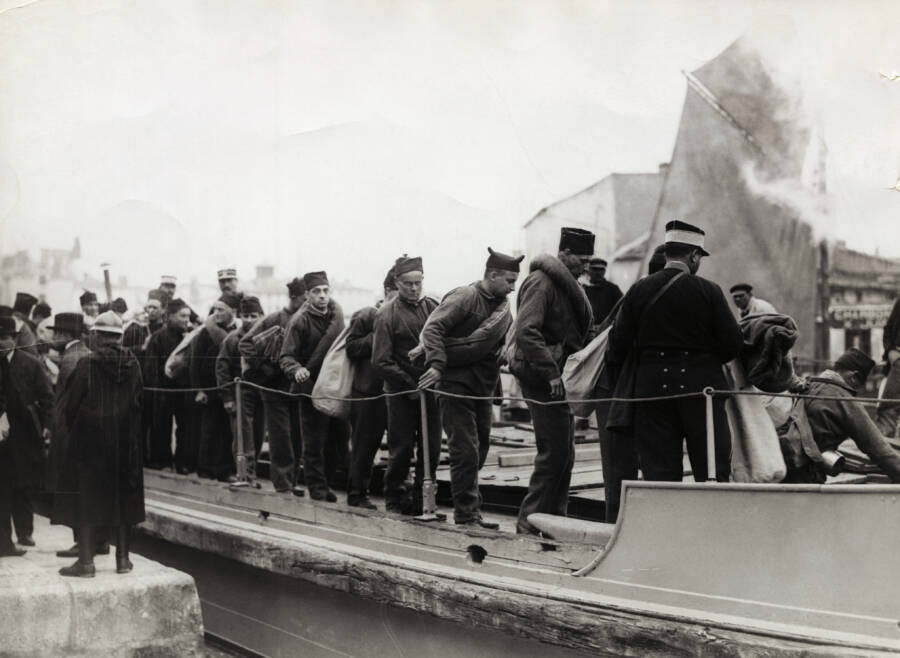 Bettmann/Getty ImagesConvicts in France board the boat that will transport them across the Atlantic to Devil’s Island, c. 1910.

Upon arrival, prisoners first went to St-Laurent-du-Maroni, a town on French Guiana’s Maroni river. There, they were divided into different categories and sent to different prisons. Some went to St Laurent’s Camp de la Transportation to work as loggers. “Worse” prisoners were sent to the Îles du Salut.

But no matter where prisoners ended up, few fared well. Some 40 percent didn’t even survive their first year. They were picked off, one by one, by rampant diseases and lack of food.

As if that weren’t enough, prisoners also endured cruel treatment from their guards. Housed in tiny, dark cells, they were forbidden from talking, smoking, reading, or even sitting before nightfall. Guards patrolled along a grid-like ceiling so that they could look down into the cells. They wore slippers so that the prisoners couldn’t hear them coming.

Before long, the penal colony was known as the “Dry Guillotine” because of its high mortality rate. But Devil’s Island had an actual guillotine too — just in case anyone acted out.

However, even if someone did survive the crossing and the conditions on Devil’s Island, they likely never went back to France.

Under the policy of doublage, convicts couldn’t leave French Guiana once they finished their punishment. Instead, they had to remain for a period equal to their original sentence — and anyone with a sentence of more than eight years was exiled for life.

Alfred Dreyfus: One Of Devil Island’s Most Famous Prisoners

Of the tens of thousands of men who served time on Devil’s Island, one stands out: Alfred Dreyfus. 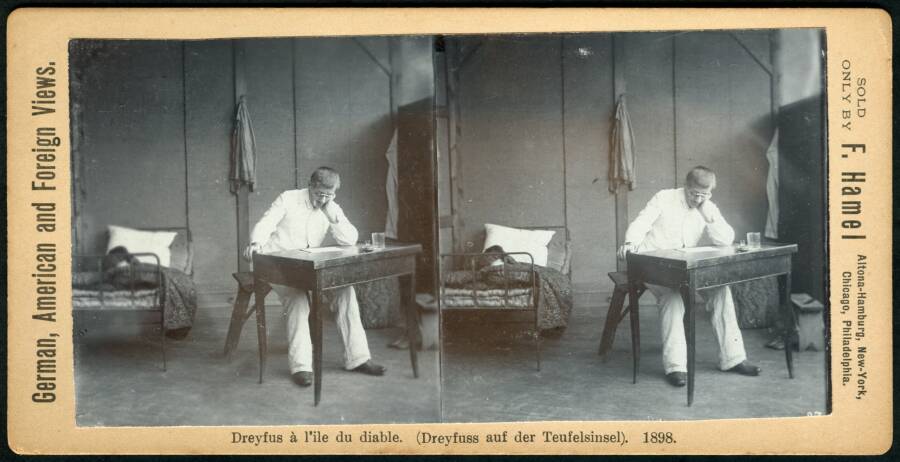 In 1894, the French government convicted Dreyfus, a young military officer, of treason. In a public ceremony, Dreyfus’s fellow officers ripped the medals from his chest, broke his sword, and marched him around, jeering, “Death to Judas, death to the Jew.”

Dreyfus protested his innocence. He had been charged with giving military secrets to the Germans, but his handwriting didn’t even match the evidence presented at court. Indeed, at a time when French national loyalty still hinged on being Catholic, Dreyfus had been convicted based on being Jewish more than anything else.

The government condemned Dreyfus to a life sentence on Devil’s Island. “It is only fair,” Dreyfus wrote morosely to his wife. “No pity should be shown to a traitor; he is the lowest scoundrel, and inasmuch as I represent such a scoundrel, I can only approve.”

For four long years, Dreyfus endured a torturous existence on Devil’s Island. Living in an isolated cabin on the Île du Diable, Dreyfus was shackled to his bed, fed rancid pork, and forbidden from speaking with other prisoners.

But back in France, the tide had begun to turn in his favor. In an open letter entitled “J’accuse!” French author Emile Zola accused the French government of framing Dreyfus in a massive cover-up.

And, eventually, the French government relented. They offered Dreyfus a pardon in 1899. He accepted even though it meant an acknowledgment of guilt.

“The government of the Republic has given me back my freedom,” Dreyfus said. “It is nothing for me without my honor.”

However, the French government fully exonerated Dreyfus in 1906.

Another of Devil Island’s most famous prisoners is Henri Charrière. He too escaped imprisonment — albeit in a totally different way. 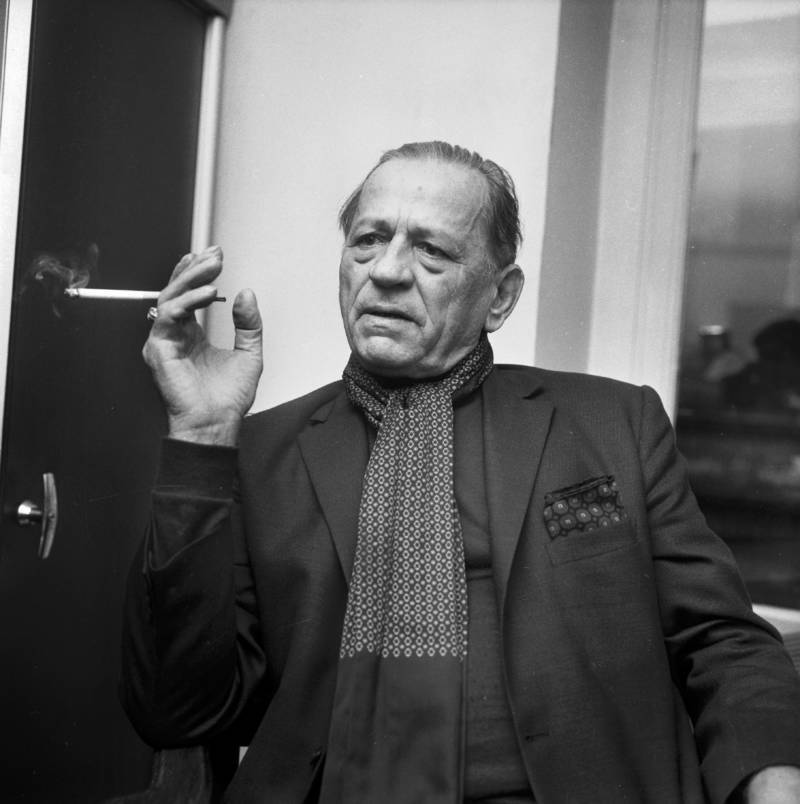 J. Cuinieres/Roger Viollet/Getty ImagesHenri Charrière was one of the few prisoners who managed to escape Devil’s Island. And he did it twice.

Charrière, a former Parisian gangster, was sent to Devil’s Island in 1931. Although he maintained his innocence, Charrière was convicted of murdering a pimp and sentenced to life in prison.

But Charrière started plotting his escape as soon as he arrived. Three years into his sentence, he launched his first escape attempt. Impressively, Charrière made it off the island. But French authorities quickly caught up to him. They sentenced him to two years of solitary confinement.

Undeterred, Charrière tried to escape seven more times. Others might have given up, but not Charrière. On the eighth attempt, he managed to flee by building a raft out of coconuts.

Charrière navigated the shark-infested waters to Venezuela. There, he settled down, had a family, and wrote an explosive book entitled Papillion, his gangster name, about his time on Devil’s Island.

The French government officially pardoned Charrière in 1970, and Hollywood later turned his book into the 1973 movie of the same name starring Steve McQueen and Dustin Hoffman. 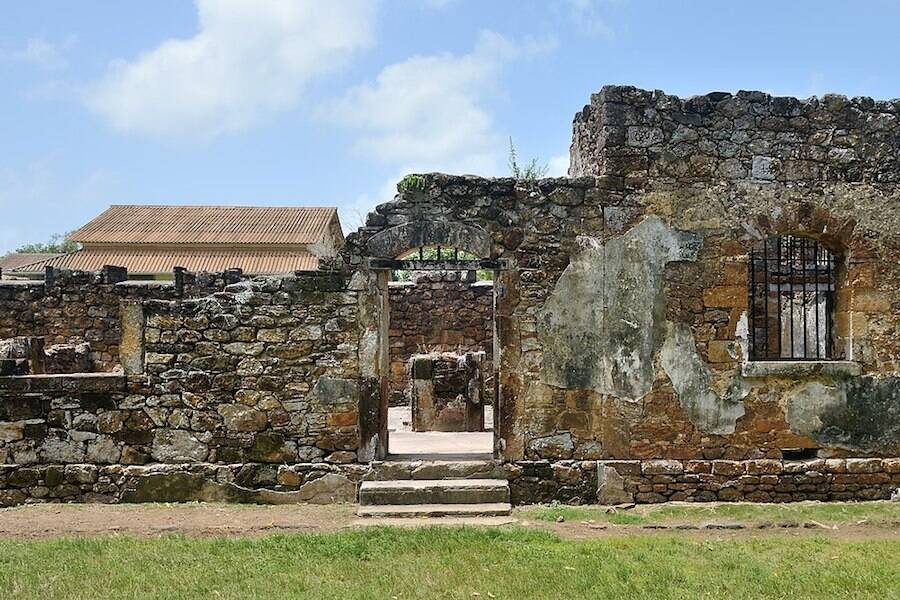 But by the time Charrière tossed his coconut raft in the water, Devil Island’s days were numbered. Horror stories had drifted across the sea. The French government officially stopped sending prisoners to the island in 1938, but World War II would interrupt its complete closure, and a few more would come in until 1946.

It wasn’t until 1953 that the last prisoners still held at Devil’s Island left for good.

In its 100 years of operation, Devil’s Island had imprisoned 80,000 men. Tens of thousands of them — perhaps as many as three quarters — died there. Prison officials tossed their corpses in the water, ringing a bell that alerted the sharks to swarm and feast.

Today, the dazzling sun above Devil’s Island obscures the horrors that took place. But it can’t entirely erase them. Visitors to Île Royale, Île St Joseph, and Île du Diable will find prison ruins in the jungle.

Like a scar on the land, their barred windows, rusted manacles, and stone cots serve as a stoic reminder. Once, this slice of paradise held true horrors.

After learning about Devil’s Island, read about the notorious Civil War prison called Andersonville Prison or about the horrors of Joseph Stalin’s “Cannibal Island.”