Inside Hallstatt, China’s Perfect Replica Of A Picturesque Austrian Village

In 2012, China spent a billion dollars building an exact replica of the historic Austrian village of Hallstatt. Though Austria was initially outraged, the two sister cities have since developed an unlikely bond. 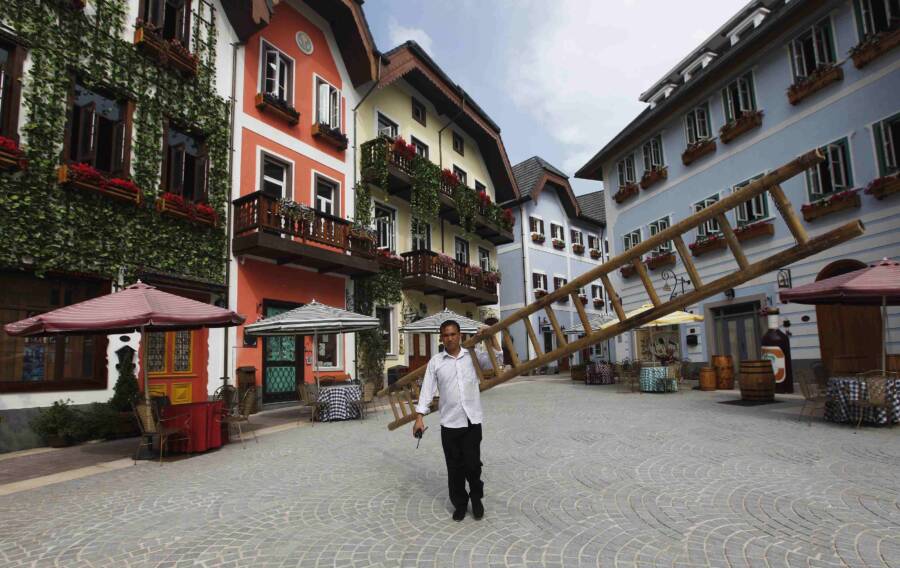 The Austrian village of Hallstatt looks like something out of a European fairytale. Its UNESCO-protected architecture and centuries-old landmarks are made all the more beautiful by a serene river and picturesque mountains. In fact, Hallstatt is so stunning that China decided to build a life-sized replica of the town in 2012.

With $1 billion in financing, the endeavor was able to focus in on every last detail of the original town and even cloned its church and town square.

“The moment I stepped into here, I felt I was in Europe,” raved 22-year-old Chinese Hallstatt visitor Zhu Bin.

The original town was fairly secluded, with fewer than 1,000 residents and little international tourism. But now, its replica has made both locations more famous than ever before — and visitors are flocking to each of these destinations in droves. 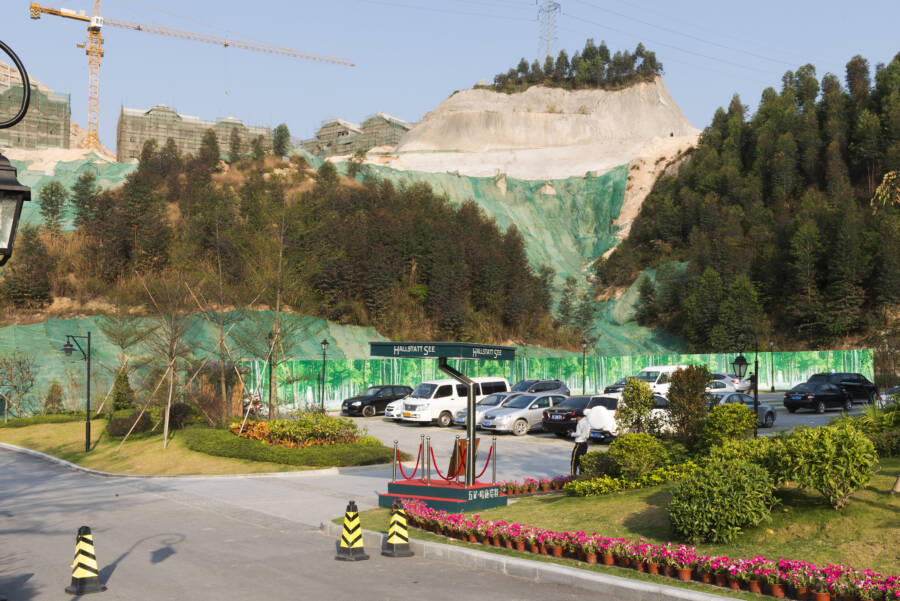 Flickr/Ars ElectronicaThe homes in Hallstatt, China, were made for private homeowners and local residents.

No country has ever made a precise copy of another country’s entire town before. But China boldly ventured into this uncertain territory.

Why China’s fascination with Hallstatt developed in the first place remains bewildering, but it’s likely that the popular South Korean soap opera Spring Waltz had something to do with it. The show, shot in and around Hallstatt, Austria, introduced the region to millions of viewers in Asia.

But the motives of the financiers of the project, Minmetals Land Ltd., remain murky. Minmetals Land kept the project shrouded in secrecy. Their endeavor would’ve remained hush-hush until the grand opening in 2012, were it not for one architect who forgot his blueprints at a Hallstatt hotel in Austria the year before. Only then did the world discover what the Chinese developers were up to. 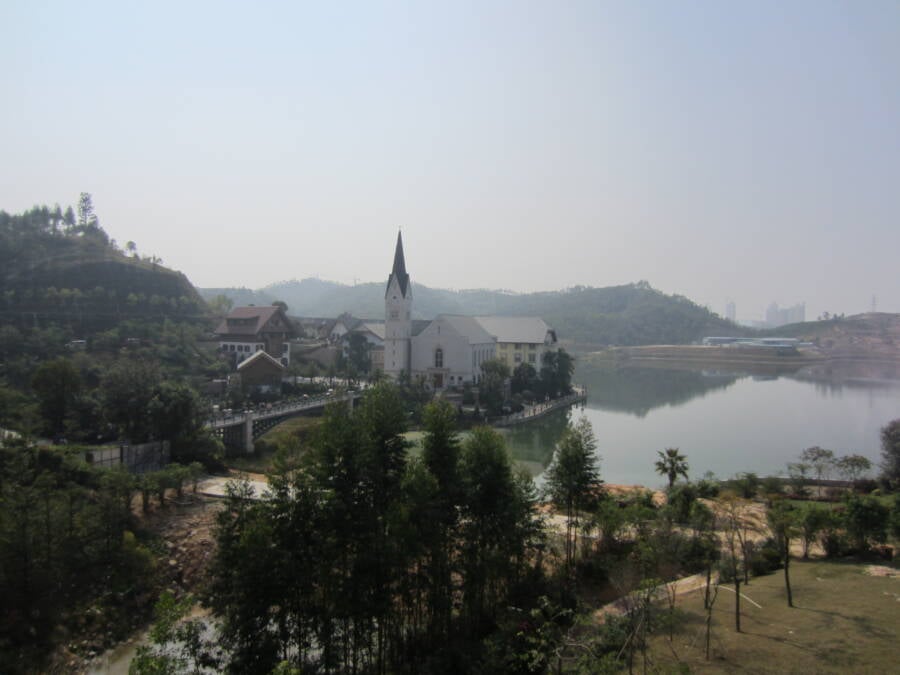 A team of architects, developers, and urban planners had traveled to Hallstatt in order to fully document its nuanced realities. They carefully crafted blueprints that detailed every brick, ledge, cobblestone, fountain, town square, and church in the Austrian village.

When they heard about the Chinese plan to build a replica, some residents of the Austrian town became protective of it.

“I don’t think it’s a good idea,” said local villager Karin Höll. “Hallstatt is just unique with its culture and traditions. You cannot copy that. I saw a report and the photos, and the copy seems different. In my opinion it is unacceptable.” 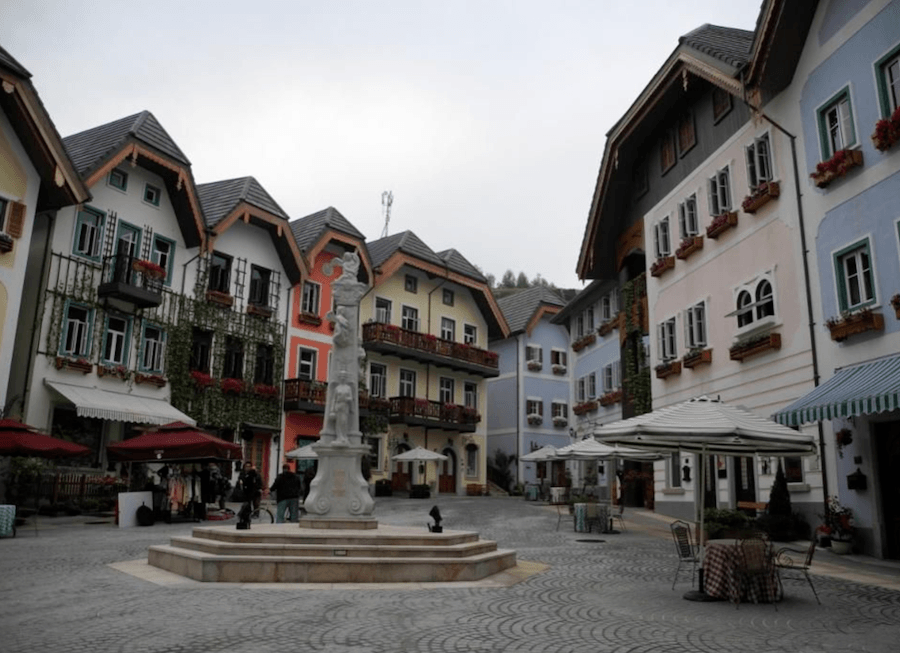 His mayor, Alexander Scheutz, largely agreed. Though he was more flattered than offended. He even flew to China with a delegation to sign documents committing to future ties with the country and marked the replica’s opening.

“It was not so controversial,” Scheutz said. “We were only surprised that a small village in Austria was built, and now we are very proud that it happened.”

And so, Minmetals Land continued on with its $940-million project.

Inside The Real Austrian Village Of Hallstatt 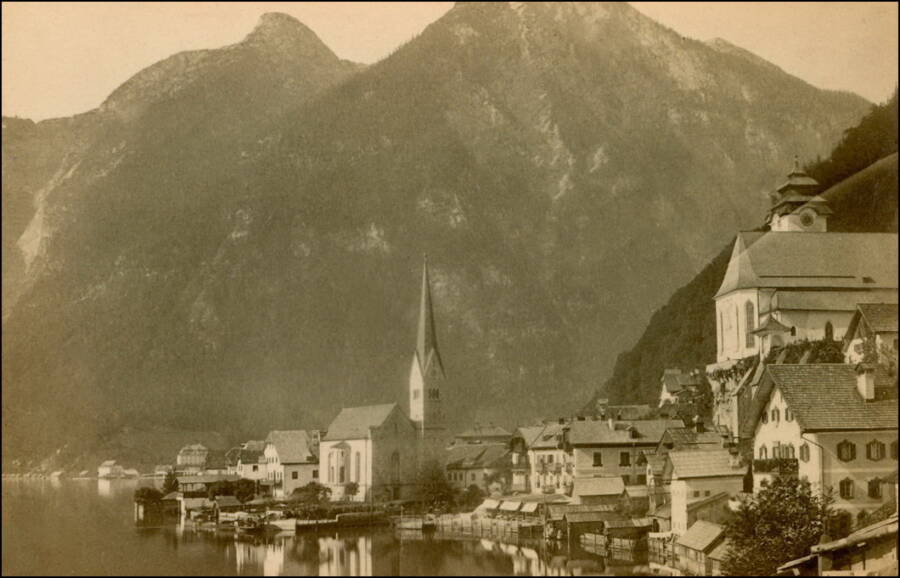 Besides becoming a twin in recent years, Hallstatt, Austria has a rich and enchanting history. Back in 1997, UNESCO made the town a World Heritage Site due to its alpine landscape and 7,000-year-old sea salt mines. Hallstatt was also once home to a Celtic culture that dates back to the Early Iron Age, between 800 and 450 B.C.

While the UNESCO distinction certainly drew some tourists, Hallstatt has experienced a boom in tourism in recent years thanks to its Chinese twin.

The gabled 16th-century houses and nightly illuminated Church of Christ certainly make for tantalizing Instagram posts. Indeed, Harper’s Bazaar deemed Hallstatt “the most Instagrammable town in the world,” and a quick glance at the #Hallstatt hashtag yields more than 700,000 photos.

And South Korea’s aforementioned TV series from 2006 contributed to Hallstatt’s booming tourism numbers as well. Before the show’s debut, only around 50 Chinese tourists visited Hallstatt in 2005. Now, thousands of Chinese travelers fly to Hallstatt every year. 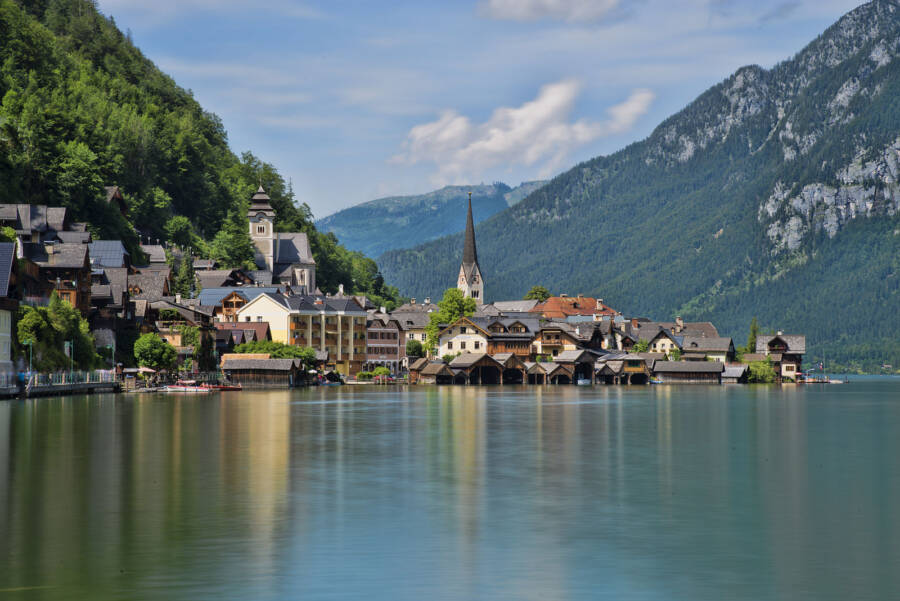 Wikimedia CommonsA view of Hallstatt, Austria from the south.

Until the pandemic led to mandated lockdowns, there were approximately a million overnight stays in Hallstatt per year. A picturesque road overlooking Hallstatt River became the most photographed street in town, with 4,000 tourists impeding traffic — and causing some local concern.

However, some believe the town has become too popular and, as a result, local officials have limited the number of vacation buses in town to 50 per day.

A Brief History Of Replicated Towns 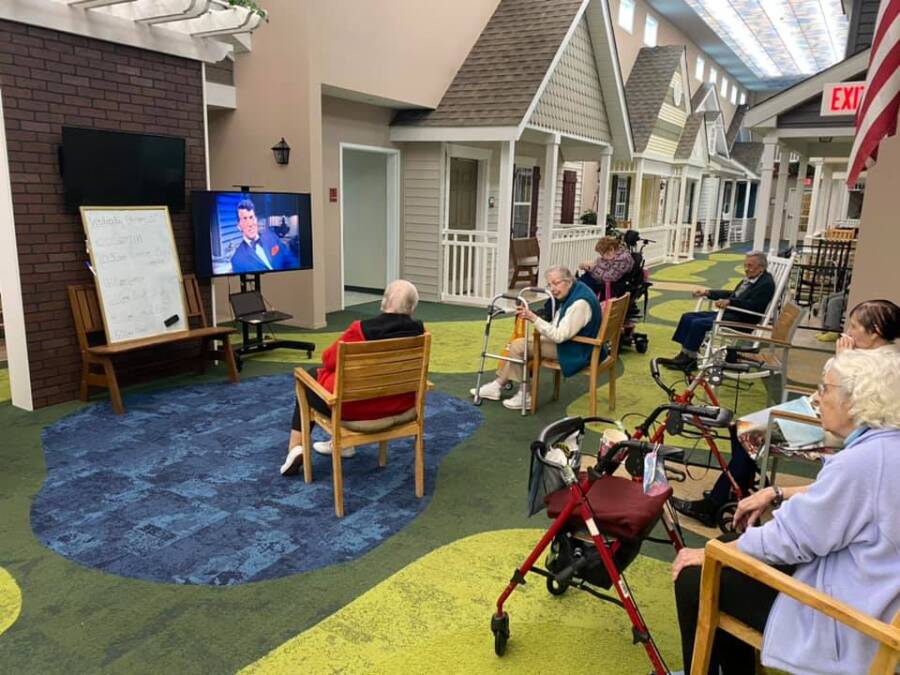 FacebookAn assisted living facility in Ohio made to recreate a 1940s neighborhood.

The villas surrounding China’s Hallstatt replica were built to attract the country’s wealthy elite, while the town itself aimed to provide regional citizens with a European experience that didn’t require extensive travel. But Hallstatt, China, isn’t the only instance of one nation mimicking another’s hotspots.

While it’s certainly the world’s first full-sized clone of an entire town, comparable scenarios have played out across the world. In Ohio, for example, an assisted living facility recreated a 1940s neighborhood so that its elderly residents living with Alzheimers and dementia would feel more comfortable.

The Japanese built a theme park resembling a 17th-century village from the Netherlands, right outside Nagasaki. And Shanghai, China is home to Thames Town, which is named after the river in London and boasts Victorian terraces, English shops, and cobblestone streets. 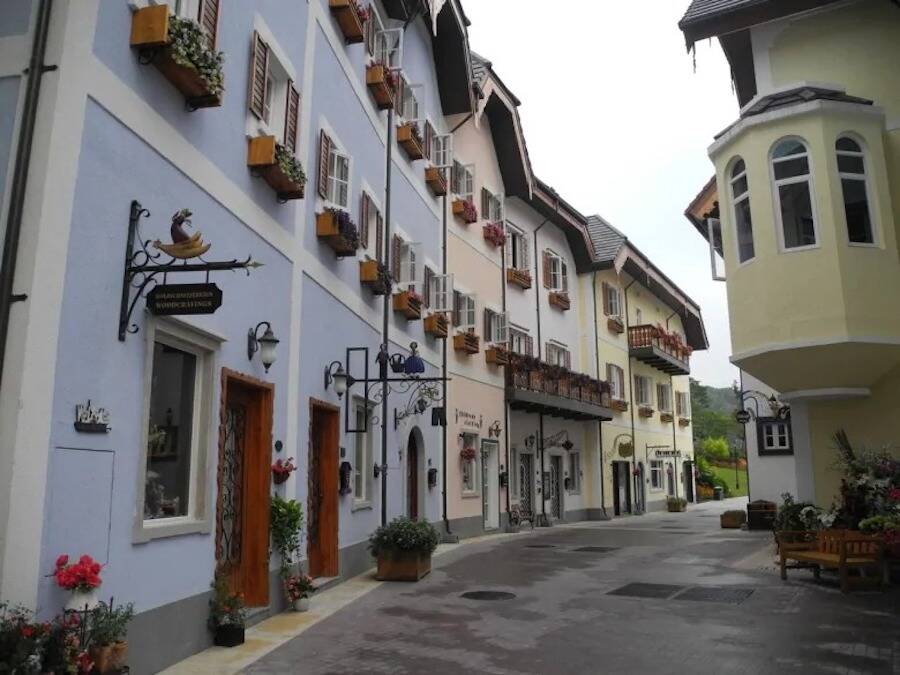 Despite their mind-bending similarities, there are some key differences between the two Hallstatts.

Where Austria’s town thrives on tourism and welcomes the world, China’s city was built as an exclusive housing project. Whether all those nearby villas have been feverishly bought up or relegated to ghost towns is unclear.

The only undeniable fact is that the Hallstatt name is more popular now than ever before.

After learning about China’s full-sized replica of the Austrian town of Hallstatt, read about China’s exorbitant levels of pollution. Then, look at 44 stunning photos of China before communism.