The haul is estimated to be worth more than $195,000 and believed to be the biggest of its kind in the United Kingdom in the last decade. 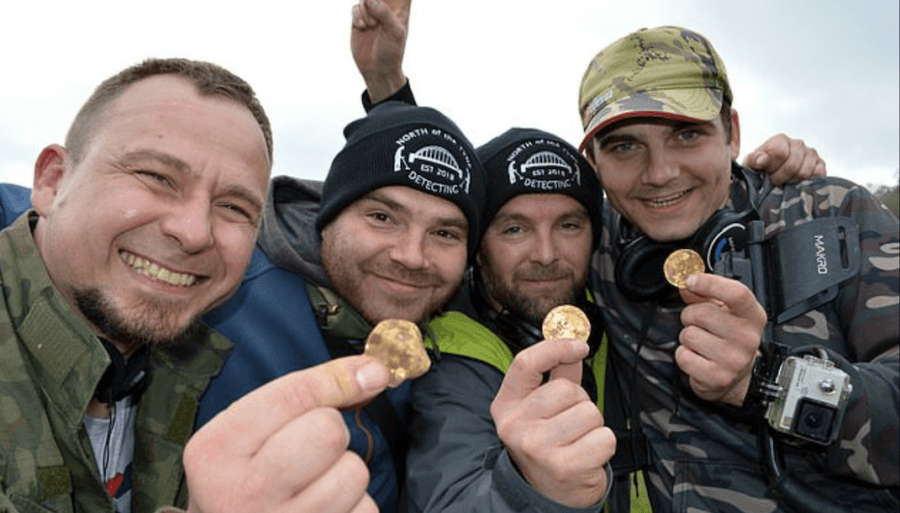 EnglandsHistory/SWNSThe group of amateur metal detectorists, known as the the “Metal Detectives Group”, discovered 557 gold and silver coins that date back to the 14th century.

A group of amateur metal detectorists uncovered 557 rare gold and silver coins during an annual event. The hoard of coins is estimated to date back to the 14th century around the height of the Black Death.

The cache of coins was discovered by a group of four men during a detectorists rally called “Detectival”, where hundreds of amateur metal detectorists gather to scour hundreds of acres of English countryside in hopes of discovering artifacts just like the rare coins that were discovered.

In addition to the rare coins, the detectorists found 12 extremely rare gold coins from the Middle Ages, which are estimated to be worth $130,000 each.

The rare discovery has been dubbed the “Hambleden Hoard” after it was found in the location of Hambleden, a village recorded in the Domesday Book of 1086.

The haul of 557 coins is extremely valuable and believed to be one of the biggest hauls that have been found within the United Kingdom over the last decade. This year’s detectorists rally was held in Buckinghamshire, England, at a site known to be historically rich along the banks of the river Thames.

The group that discovered the valuable coin haul was made up of four amateur finders: Andrew Winter and his friends Tobiasz and Mateusz Nowak, and their new acquaintance Dariusz Fijalkowski, whom they met at the rally. 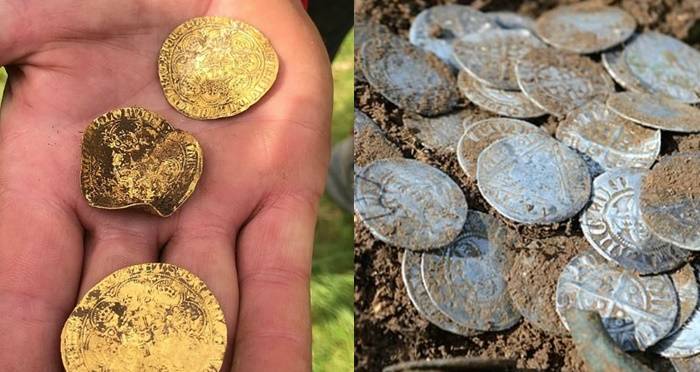 Andrew WinterThe hoard of gold and silver coins alone is estimated to be worth $195,000.

The men were delighted by their rare discovery, though they admitted that they were more used to digging up ordinary things, like shotgun shells and thimbles—centuries year old items that were old but not of much value.

To the group’s surprise, however, their participation in the event quickly resulted in a decent amount of treasures. On their first day, the group found 276 silver coins and nine gold nobles. In total, they excavated 557 coins over the course of the four-day rally.

Mateusz Nowak, who works as a hospital cleaner, told Daily Mail that the experience of the discovery felt unreal.

“After finding the hoard, and then clearing the area, we had to extend the search twice more because we were finding so much,” Mateusz said.

His brother, Tobiasz, who earns a living as a baker when he isn’t moonlighting as a detectorist, added: “I can’t even imagine how we got so lucky. It was the best weekend of my life. I’ll remember it my whole life.”

After the group had found more than three silver coins in the area they were working in, under the rules of the organized rally, the four men declared their findings to the organizers and jointly claimed the rare hoard.

News of the incredible find soon spread to the other rally participants, which the group said turned things “absolutely hectic”. The site where the coins were found was eventually sealed off so that the four detectorists could continue their work undisturbed.

Finds Liaison Officer and archaeologist Anni Byard was called to the site to confirm the authenticity of the coins.

“I haven’t done the final count yet but c.500 silver and 12 nobles. Quite a hoard. Being scattered made it difficult to map and record but we got there in the end!” Byard tweeted about the discovery:

#Findsfriday the #hambledenhoard discovered last weekend on the #Detectival event. And excavated and recovered under the guidance of @AnniB_OxonFLO and Bucks county archaeology. With the help of the Detectival finds team and the finders of the hoard. Well done everyone 👍 pic.twitter.com/MwTTnbsUfR

The collection of silver coins in the haul are of a rare mintage, originating from the regions of Lincoln, Birmingham, Ireland, and Scotland.

The entire hoard is estimated to have originated from the time of King Edward I, who was known as the Hammer of the Scots and ruled the English territories from 1272 to 1307, and then his son King Edward II, who would take his father’s place on the throne after Edward I’s death.

While estimates of the “Hambleden Hoard” have been calculated by expert archaeologists, the value of the coins have yet to be officially determined. Until then, they will remain in a museum and, later on, sold. Profits from the sale of the cache will be split between the group of amateur detectorists who find it and the property owner on which the coins were found.

After reading about the impressive discovery of these rare coins, learn the story of $2.4 million of gold bars that were found in a tank purchased on Ebay. Then read about two male victims of the Black Death holding hands in a shared grave found by archeologists.