Hannah Potts claimed she wanted to feel abducted to gain inspiration for a manuscript after her fake kidnapping spurred an FBI investigation. 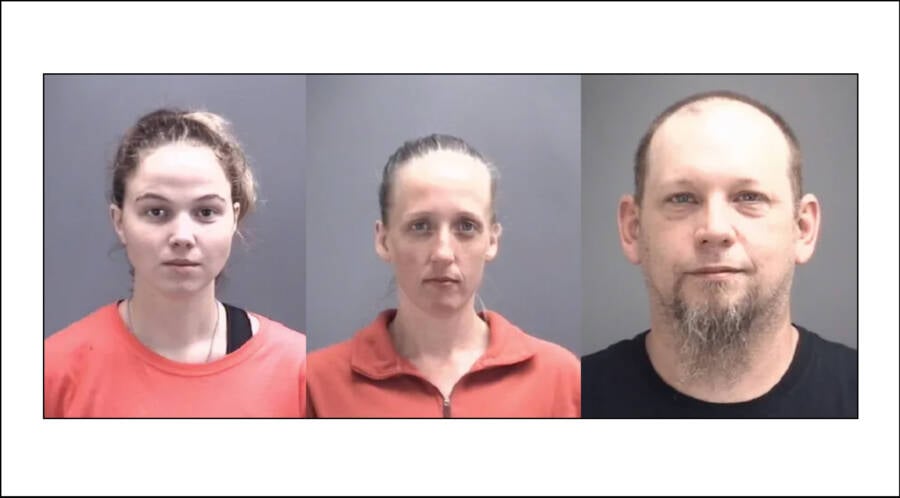 When Hannah Potts published a Facebook live video claiming she had been kidnapped by a Black man in a maroon vehicle, her family went into a tailspin. After two harrowing days of uncertainty and the FBI joining her search, Potts was found in her friend’s basement — admitting she made it all up.

The 23-year-old writer told Indiana police that her abduction had been a hoax, aimed to serve as inspiration for a manuscript she was writing. According to The Courier Press, her friend Maria Hopper agreed to house her for the duration, and Hopper’s boyfriend Joshua Thomas was also in on the plot.

The video posted on July 24 caused the terrified Potts family to distribute an endless amount of flyers, while 4,500 people joined a Facebook page created to raise awareness of the supposed kidnapping. While the investigation was short-lived and ended with her discovery on July 26, Potts has since drawn scorn — and criminal charges.

“She is dead to me,” wrote sister Brittany Schonaman.

“I hope she is prosecuted to the fullest extent of the law. My family feel extremely embarrassed and hurt by her actions, and the fact she tried pinning this on a person of color. I pray no black man with a maroon colored car was targeted due to her blatant lie.”

While the downright irresponsible scenario unfolded publicly on July 24, Potts and Hopper had been planning the stunt all week. Police uncovered a slew of text messages between the two throughout their investigation, in which the pair discussed destroying their cell phones and SIM cards.

For the Potts family, however, all bets were off — and there was no telling what would happen next. Potts had claimed in her video that she was outdoors taking pictures of animals when a Black man calling her “baby girl” suddenly emerged and stuffed her into the trunk of his car.

Potts described her area of confinement as nothing more than a room with four walls and a light, before pleading with viewers to alert the authorities. Unbeknownst to every Black man in Indiana, they had just become a suspect in kidnapping a 23-year-old white woman. 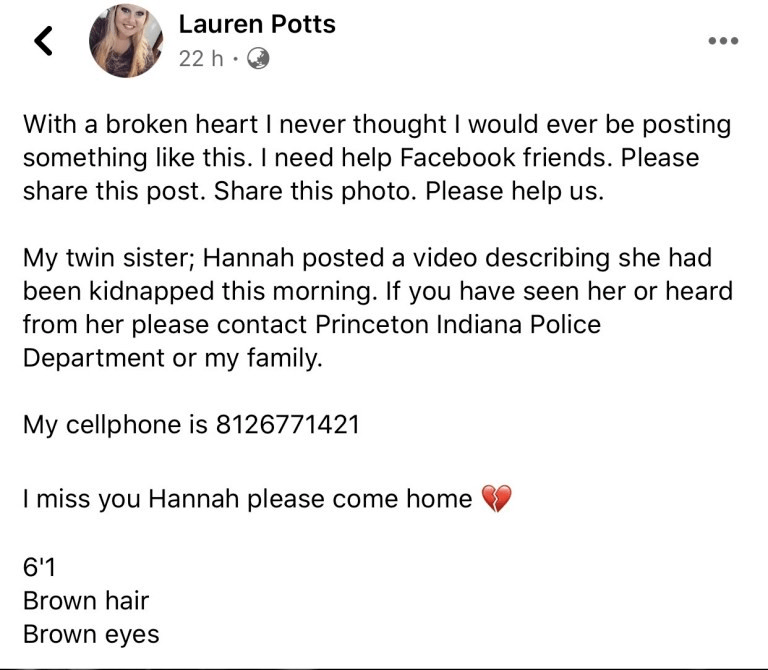 FacebookFriends and family were unspeakably distressed, while Hannah Potts was merely hanging out at her friend’s house.

The flyers subsequently distributed provided contact information for both Lauren Potts and the Princeton, Indiana Police Department. The missing woman’s last known whereabouts and outfit were described, with a smiling photo of Potts plastered above.

The family created a Facebook page to spread awareness more efficiently, and local authorities welcomed the invaluable help of the FBI. It had not even been a day since Potts disappeared — but 4,500 social media users seemed eager to help and a federal intelligence agency joined the hunt.

Unfortunately for Potts, the rapid rise in attention led to massive fallout on July 26. According to The Princeton Daily Clarion, Gibson County Sheriff’s Deputy Sergeant Roger Ballard and his men visited Hopper’s home — and found Potts in an enclosed space in the basement.

Hopper initially claimed Potts wasn’t there but agreed to let police search her home. When Ballard noted a stairway leading from the kitchen to the basement, Hopper said there wasn’t anything down there — but complied in letting the men take a peek. 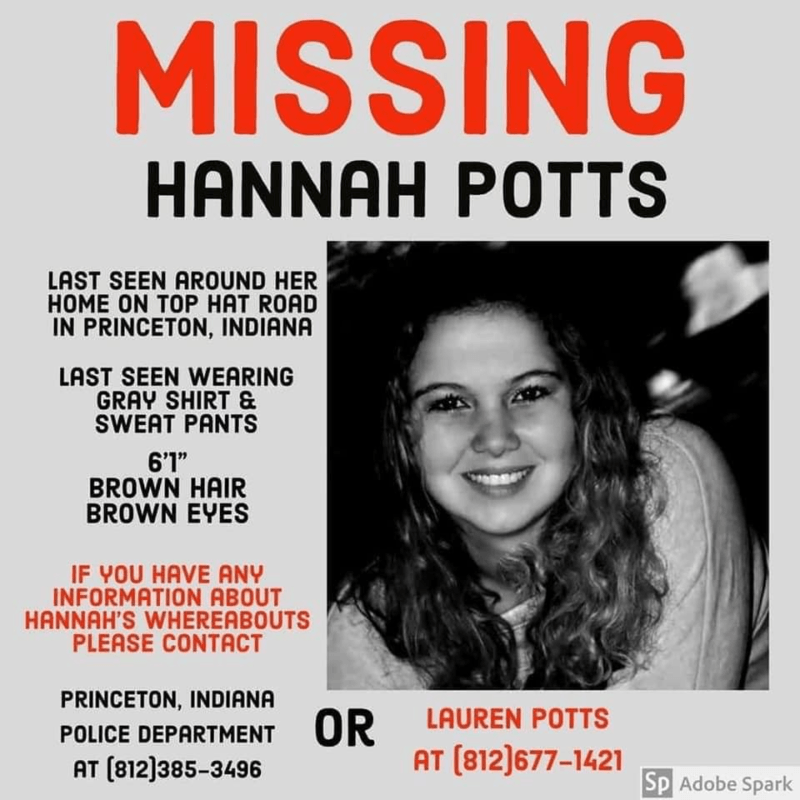 FacebookPotts claimed in her video that a Black man calling her “baby girl” stuffed her in the trunk of his car.

A piece of plywood blocking off a suspicious basement area tipped Ballard off. Though Hopper claimed it was merely “an area that was just full of spiders,” police rather quickly found Potts hiding inside.

In a remarkable turn of events, Potts told the police that she wasn’t being held against and her will — and wanted to stay in the basement. The police nonetheless urged her to be interviewed at the Gibson County Sheriff’s Office, where the truth finally emerged.

“She wanted to have this experience for research purposes in a manuscript that she was writing,” said Ballard.

Potts admitted that she had rehearsed her Facebook live post for a week — and assured Hopper that it would go viral. She also confessed that Hopper and her boyfriend organized her basement dwelling and drove her there in Hopper’s car, before handing her phone to Hopper to break it — and cutting the SIM card to pieces. 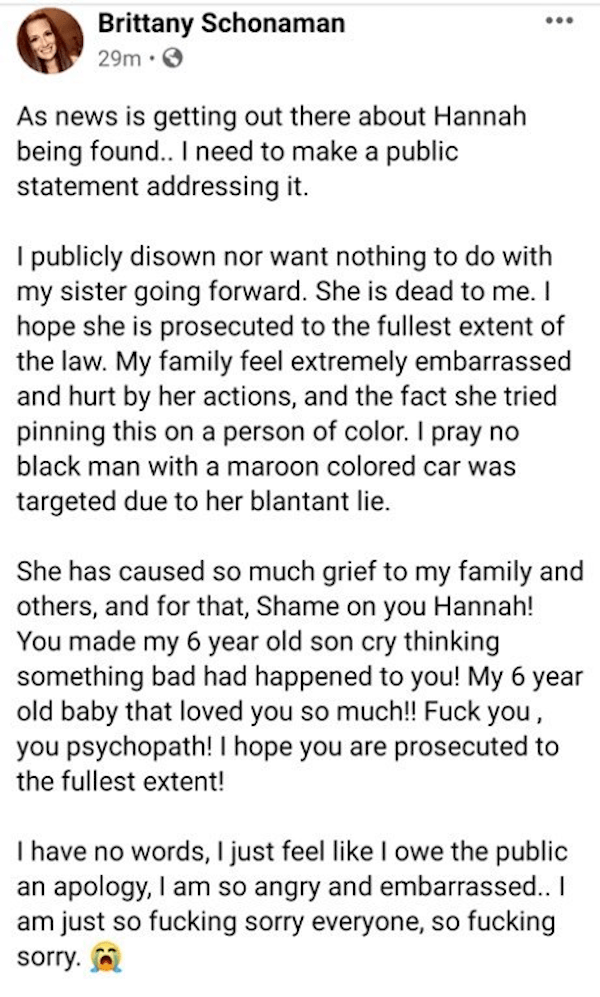 FacebookSchonaman has naturally been crushed by the heft and recklessness of Potts’ lies.

Ultimately, Potts not only fabricated an irresponsible lie that grew to untold proportions — but potentially endangered the lives of innocent Black men living and working in the area. Her family has since grown harshly distrustful, and publicly so — as Potts, Hopper, and Thomas await sentencing.

“Ms. Potts’ actions are criminal in nature,” said Gibson County Prosecutor Michael Cochren. “She had many people in her family and community worried sick over her personal health and safety. Further, she risked involving innocent individuals by giving a false description of the alleged abductor.”

“Finally, the number of hours spent by multiple law enforcement agencies in this time of limited resources is simply not recoverable. This callous disregard for others simply will not be tolerated.”

All three involved in the reckless hoax now face one count of false informing, with a continuance granted to each defendant during an August court hearing. Potts and Hopper will face trial on Oct. 8, 2020, with Thomas set to appear on Sept. 28.

After learning about the Indiana woman who faked being abducted by a Black man for her manuscript, read about Breana Harmon Talbott, the woman who falsely accused three Black men of rape and received no jail time. Then, learn about the Georgia couple sentenced for making racist threats at a Black child’s birthday.