The Unbelievable True Story Of Juana Maria, The Woman Who Inspired ‘Island Of The Blue Dolphins’

When her Nicoleño tribe left California's Channel Islands for the mainland, Juana Maria stayed behind for 18 years.

The classic 1960 novel Island of the Blue Dolphins still captures the imaginations of young readers as they follow the story of an Indigenous teenager trying to survive on a remote island by herself.

However, despite the book’s enduring popularity, many readers don’t know that its captivating tale draws on the true story of Juana Maria, a native Nicoleño woman who spent 18 years living alone in the Channel Islands of 19th-century California.

This is the true story behind one of the most-loved young adult novels of all time.

Who Was Juana Maria? 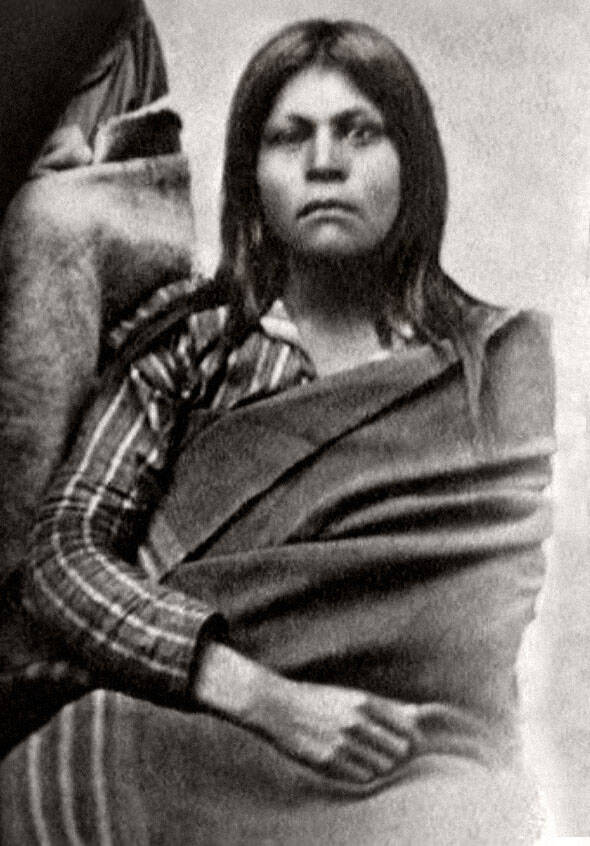 Wikimedia CommonsThis photo, found among the possessions of María Nidever, may be the only surviving portrait of Juana Maria.

Juana Maria, whose real name is unknown, was likely born at the beginning of the 19th century on the island of San Nicolas, a small remote body of land located in the Channel Islands territory off the coast of southern California. She was part of the Indigenous tribe known as the Nicoleños.

At the time of her birth, the Channel Islands were inhabited by various autonomous groups of Native Americans, each with its own distinct language and culture. California had not yet been incorporated into the U.S., but it would be in 1848 as part of a peace treaty that followed the Mexican-American War.

Meanwhile, the Indigenous populations of the islands began migrating to the mainland of California beginning in the 19th century. Southern California was a hub of Christian missionaries and many of these native migrants joined the mission system as converts. 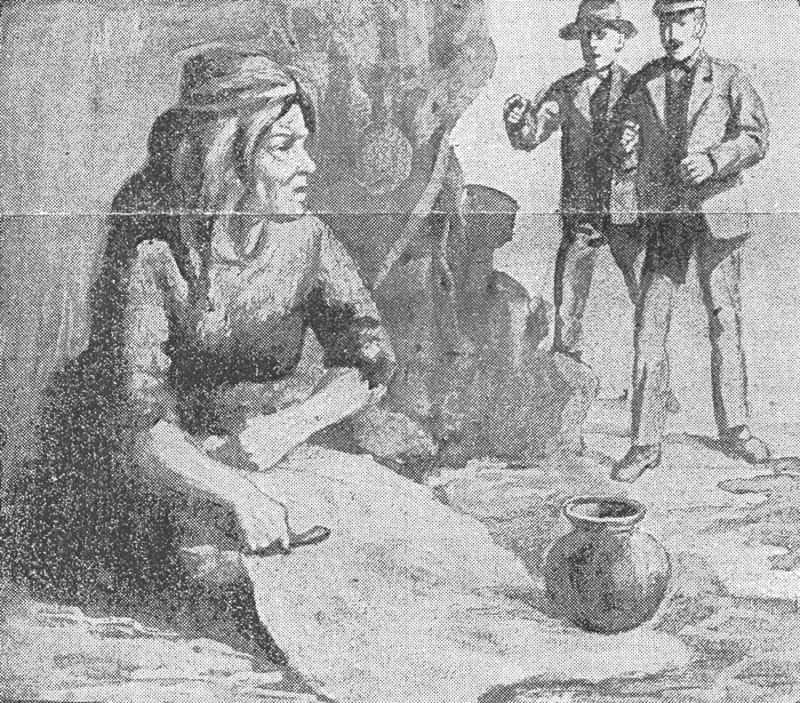 Wikimedia CommonsJuan Maria sustained herself on dried meat and etched records of her time alone on the island.

The Nicoleños were the last to leave their island. In 1811, they had suffered a vicious massacre at the hands of Alaskan Kodiak sea otter hunters hired by Russian fur traders. That attack and disease decimated their population.

In 1835, the 200-300 remaining Nicoleños joined the crew of a visiting Mexican schooner named Peor es Nada and moved to the mainland. Juana Maria, however, did not join them.

It’s unclear why she didn’t go with the last of her people as they moved to the mainland. According to legend, she was taken to the boat but jumped out and swam back to shore to be with her baby. However, many researchers have written off this account as dramatized lore.

Nevertheless, Juana Maria lived on the island for 18 more years. For part of that time, she lived with her son before his untimely death in a boating mishap. The remainder of her time on the island was spent in total isolation.

The Search For The Lone Woman 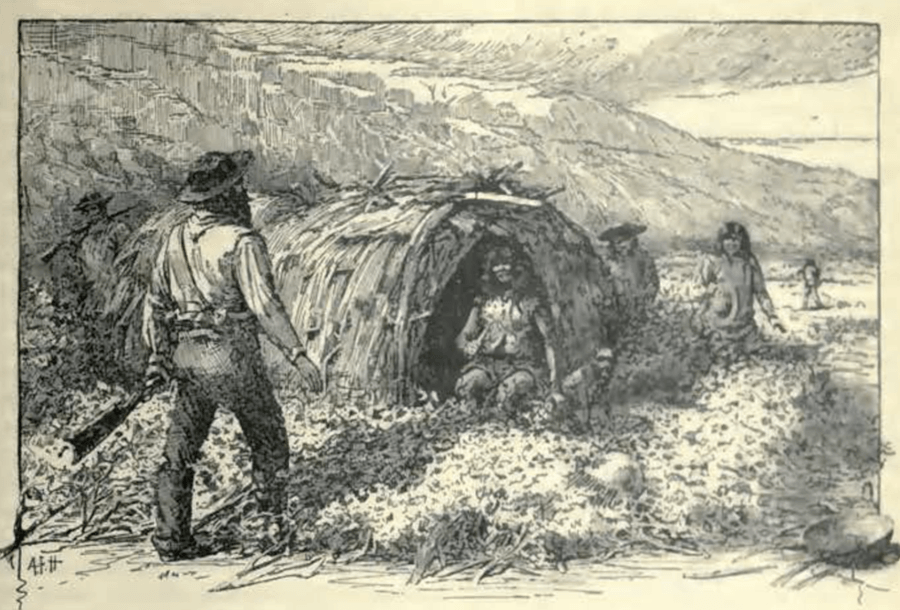 Wikimedia CommonsJuana Maria lived inside a hut she made out of whale bones and also had a cave dwelling nearby.

Following the relocation of the Nicoleños, accounts of Juana Maria’s lone existence on the island spread across California’s Santa Barbara port area. There were attempts to bring her to the mainland, possibly funded by local missionaries, but she was never found.

In 1853, a hunting expedition led by Captain George Nidever set sail to San Nicolas island where his crew unexpectedly encountered Juana Maria during their month-long visit. According to studies based on oral accounts gathered by early researchers, Nidever’s crew had found signs of Juana Maria’s presence on their last night on the island. 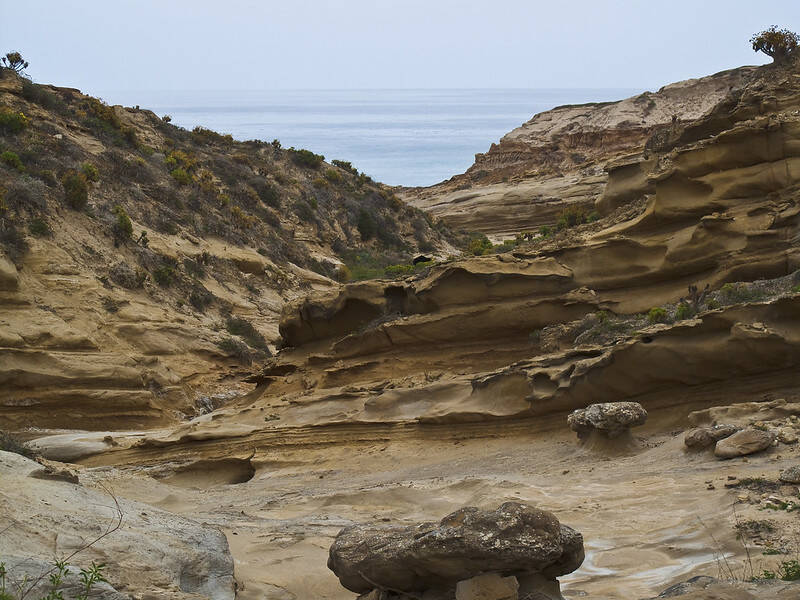 John Game/FlickrCanyons run through sandstone rock on the north side of San Nicolas island.

Thus, Captain Nidever decided to postpone their return and seek out this mysterious woman. They discovered her the next day, hiding in the high bush, silently observing the crew.

Nidever requested that Malquiares, a Native American member of his crew, attempt to communicate with her. She sang a brief song that Malquiares was able to memorize despite not being able to understand her language. The woman’s song was eventually translated: “I leave contented, because I see the day when I want to get out of this island.”

The women then offered Nidever’s crew wild onions she had been roasting.

Juana Maria lived in a hut partially made of whale bones and she also occupied a nearby cave. She sustained herself on dried meat and marked her time on the island with a notched stick. When Captain Nidever’s crew returned to California, Juana Maria came with them. 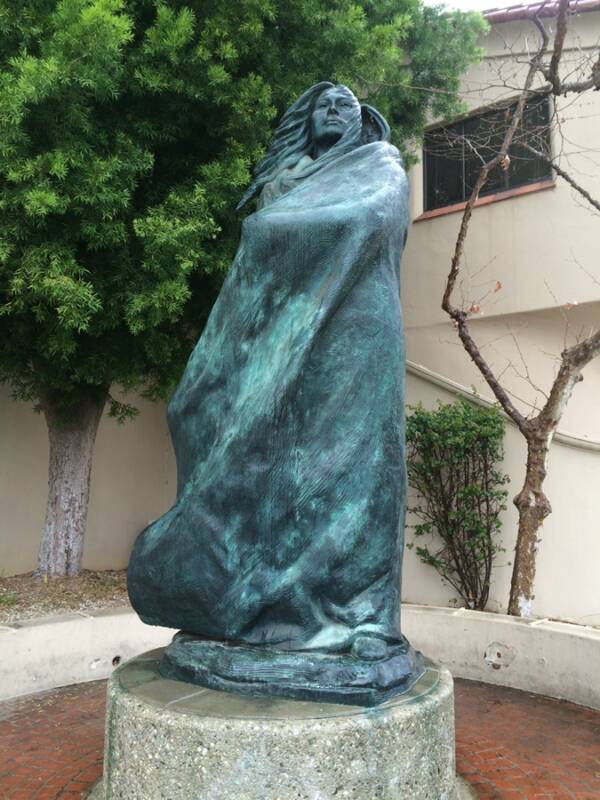 In Santa Barbara, Juana Maria lived at the home of Captain Nidever with his wife, María, who was Spanish. The two women seemed to get along well despite the language barrier.

Juana Maria spent much of this time on the back porch of the house where she could gaze at the sea. She received visitors, including a few native Chumash people, who brought her fruits as gifts. She reportedly loved horses and was fascinated by her new surroundings in Santa Barbara.

Early anecdotes suggest she was unable to communicate with other natives because the dialects were too different. But recent studies found she was able to communicate, if perhaps only minimally, with at least three to four Native Americans familiar enough with her native language.

“The story she communicated was that she stayed behind to be with her son…and they lived together for a number of years,” said Steven Schwartz, a Navy archaeologist who spent 25 years studying native artifacts found on San Nicolas. 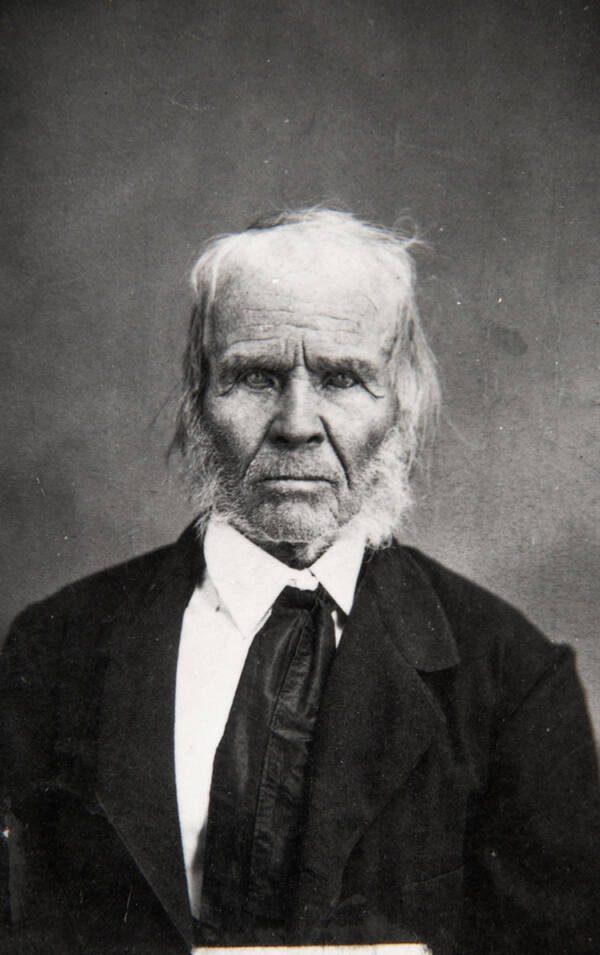 “One day the boy was in a boat fishing, there’s some disruption, the boat flips over, and the boy disappears,” possibly the victim of a shark attack, Schwartz speculated. After her son’s death, Juan Maria was truly alone, which may have been why she was willing to leave the island on Nidever’s ship.

It had been believed that, at the time of her arrival in Santa Barbara, Juana Maria was the only Nicoleño still alive. But a 2016 study traced at least four Nicoleños to Los Angeles following the migration in 1835.

One of them was baptized as Tomás at age five, eventually married and had a son, and then lived at least eight years after Juana Maria arrived in Santa Barbara.

Juana Maria died on Oct. 19, 1853, just seven weeks after her arrival in Santa Barbara, possibly of dysentery. She received a conditional baptism which allowed her name to be registered into church records, and she was laid to rest in the Nidever family plot at Mission Santa Barbara.

She may have not been the last of her people, but it is likely that she was the last native speaker of the Nicoleños’ language.

New Discoveries About Her Story 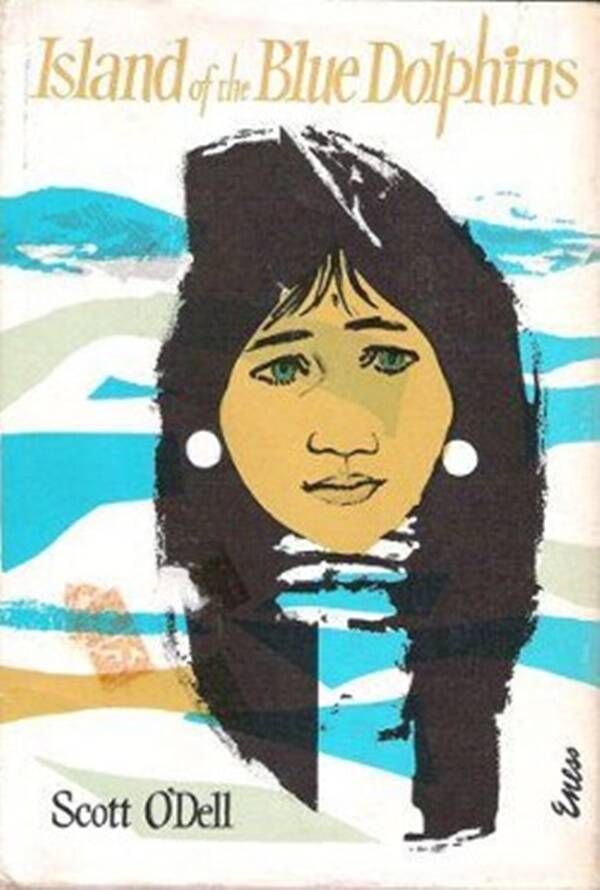 News of Juana Maria’s arrival in Santa Barbara caused a sensation around the world. Stories about her solo island existence and subsequent “discovery” were published as far as Germany and India.

Author Scott O’Dell was inspired by Juana Maria’s story and wrote the 1960 novel Island of the Blue Dolphins about a 12-year-old Nicoleño named Karana who survives on her own on the remote island.

The book became a cult favorite and spawned public interest in the real-life figure of Juana Maria. Archaeologist Steven Schwartz has been working with other experts under the National Parks Department to assemble an exhaustive archive about Juana Maria’s life story. 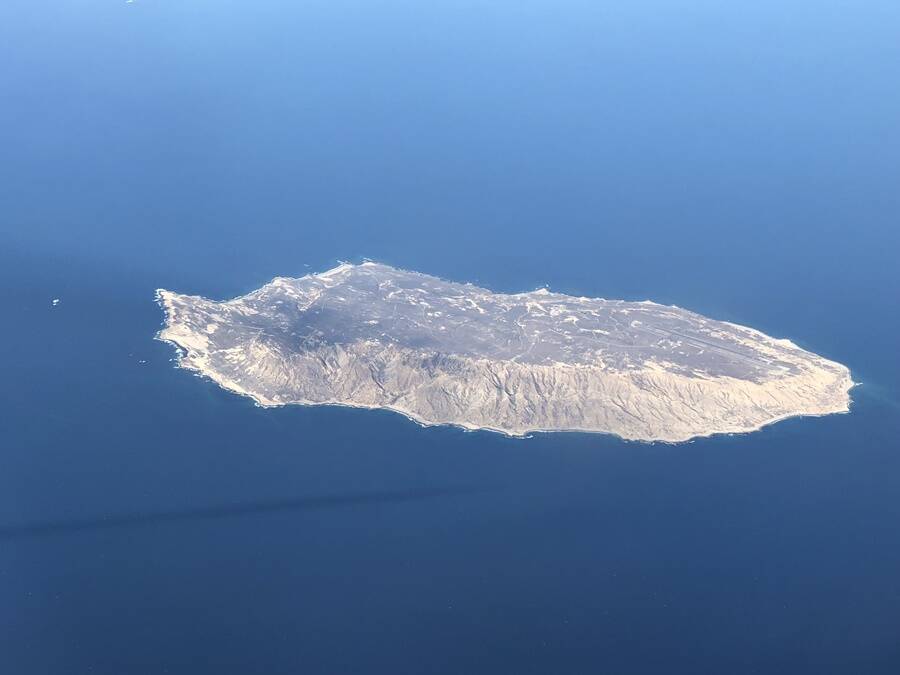 Wikimedia CommonsA bird’s eye view of San Nicolas island which, of all the Channel Islands, was the most difficult to access by boat during the 19th century.

As historians learn more about Juana Maria’s haunting story, it’s clear we have yet to uncover the full picture of her unbelievable life.

Next, read about the controversial history of La Malinche, the Native American who helped Hernán Cortés conquer the Aztecs, and discover the horrifying history of the Trail of Tears, the U.S. government-sanctioned genocide that removed 100,000 Native Americans from their ancestral lands.