Known among the Nazis as "the girl with the red hair," 24-year-old Hannie Schaft was so deadly that Adolf Hitler personally ordered her capture.

Hannie Schaft was only a teenager when the Nazis invaded Poland. Less than a year later in 1940, German tanks rolled into the Netherlands. Schaft knew that the Nazis would terrorize her country — so she dedicated the rest of her life to taking down the Nazi occupiers.

And that’s exactly what she did. For much of World War II, Hannie Schaft saved the lives of countless Jews, gathered vital information for the Dutch resistance, and assassinated Nazis and their Dutch collaborators.

Her exceptional track record as a resistance fighter earned her a spot on the Nazis’ most wanted list — as “the girl with the red hair.”

How Hannie Schaft Joined The Resistance 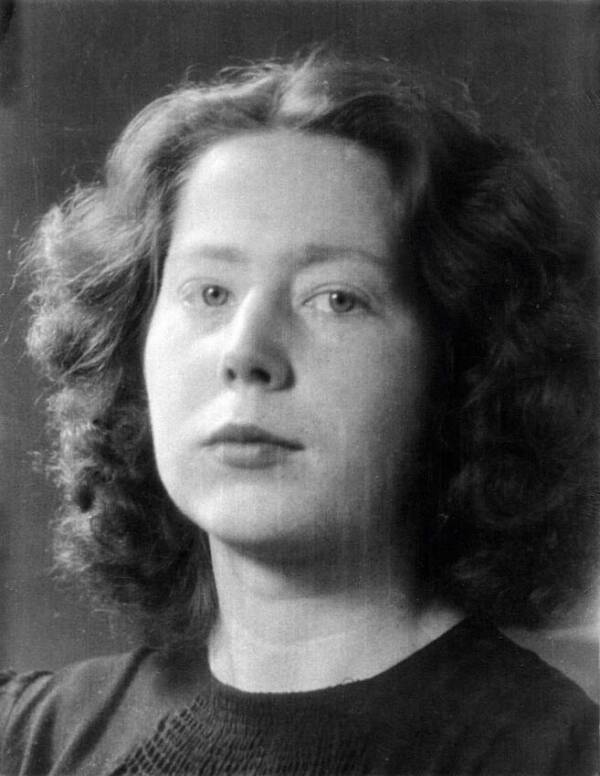 Born on September 16, 1920, in Haarlem, Netherlands, Hannie Schaft became an only child when diphtheria killed her 12-year-old sister in 1927. Though Schaft was a quiet girl, she formed strong views on politics. Guided by her socialist parents, she developed a deep hatred of fascism early on.

When the Nazis invaded the Netherlands in 1940, Schaft was studying law at the University of Amsterdam. By 1941, the mistreatment of Jews by the Nazis convinced Schaft to join a communist-leaning resistance cell in Haarlem.

Schaft’s resistance missions started out small. She snuck into a public pool and stole identity cards for two Jewish friends. These identity cards would help protect Dutch Jews from being sent to concentration camps.

As a member of the resistance, Schaft also helped raise money for the movement. But soon, her missions became more dangerous.

Her Missions As A Dutch Resistance Fighter 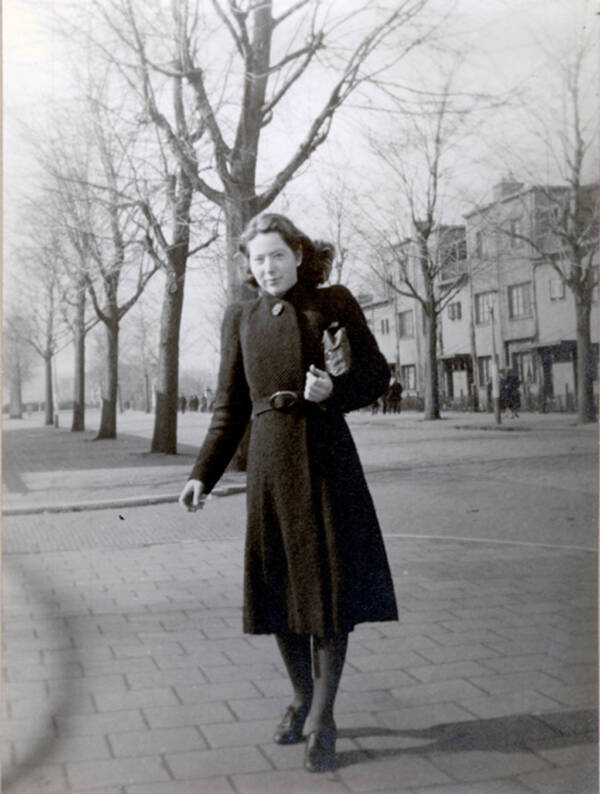 Unknown/Wikimedia CommonsA photograph of Hannie Schaft, taken around the time she joined the resistance.

In 1943, the Nazi occupiers tried to force Dutch students to sign a loyalty oath to them. Hannie Schaft and most of her fellow students refused — even though it meant forfeiting their right to further education.

Around this time, Schaft began to use her parents’ home as a place to hide Jews and give them fake documents so they could leave the country safely.

But Schaft wanted to do more. She asked the resistance for a weapon so that she could assassinate Nazis. And her contacts agreed.

Then, on the night that Schaft planned to kill her first target, the gun never fired. Though she pulled the trigger multiple times, the target survived. Schaft soon learned that the resistance had set up a test to make sure she had the guts to pull the trigger. She passed — and began killing Nazis.

Schaft often targeted the occupiers for assassination with two other female resistance fighters, the sisters Truus and Freddie Oversteegen. Together, the three assassins took down Dutch traitors and Nazi officers.

In one mission, Schaft and her fellow resistance member Jan Bonekamp attacked a Nazi-allied police captain on their bicycles. But before Bonekamp could bike away from the scene, the police captain shot back at him.

Traumatized, Schaft fled to the Oversteegens. “I messed up my job and Jan got caught,” Schaft confessed. “I rode away and Jan was shot down.”

The Capture And Execution Of Hannie Schaft 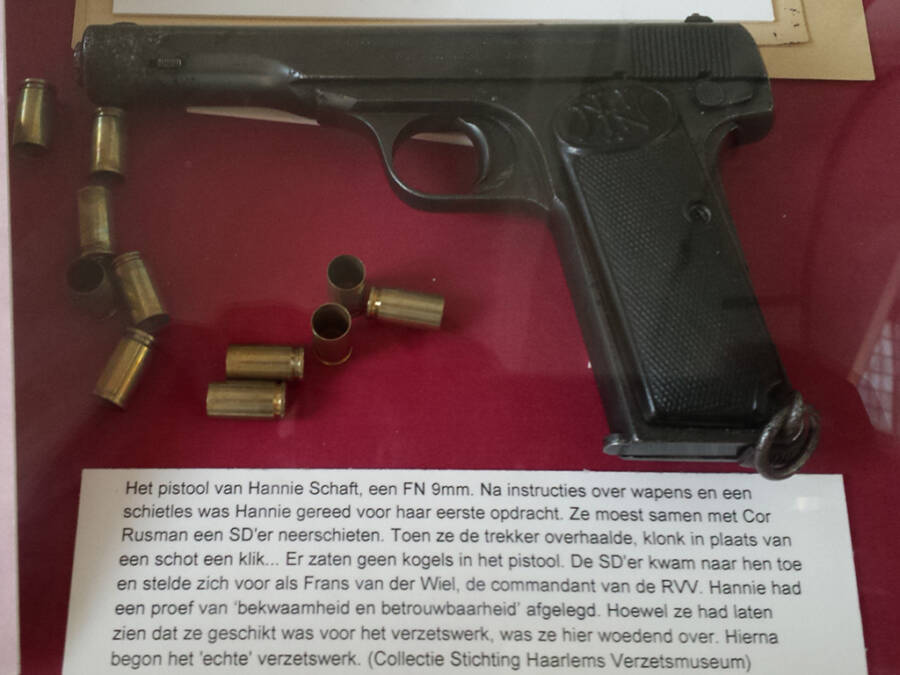 Thayts/Wikimedia CommonsThe pistol Hannie Schaft used as a resistance fighter, now on display at the Noord-Hollands Archief in Haarlem.

By the time Bonekamp was captured, Hannie Schaft was already on the Nazis’ most wanted list as the mysterious “girl with the red hair.” In fact, Adolf Hitler had personally ordered her capture.

Unfortunately, the failed mission with Bonekamp would give the Nazis the clue they needed to find Schaft. Injured and facing Nazi interrogators, Bonekamp initially refused to give up any information on the resistance. But then, one Nazi posed as a resistance member, prompting Bonekamp to give him the address of Schaft and her parents shortly before he died.

Nazis then arrested Schaft’s parents and sent them to a concentration camp. Schaft, mad with grief, nearly turned herself in. Resistance members ordered her to stay with the Oversteegens until she calmed down.

Ultimately, instead of bending to the Nazis, Schaft took on even more dangerous assignments with the resistance. Well aware that she was known as “the girl with the red hair,” she simply dyed her red hair black and began scouting German submarine facilities and rocket-launching sites.

During the final months of the war, Nazis stopped Hannie Schaft at a checkpoint, carrying contraband newspapers and a pistol. After arresting her, the Nazis noticed the red roots peeking out from her dyed hair. Though their war was surely lost, they had captured the girl with the red hair.

Just three weeks before the liberation of the Netherlands, the Nazis took Schaft out to the sand dunes of Overveen. A Nazi executioner leveled his gun at Schaft and shot. But the first bullet only wounded her. Schaft’s final words were “I’m a better shot,” before she was hit with the bullet that killed her.

The Legacy Of Hannie Schaft 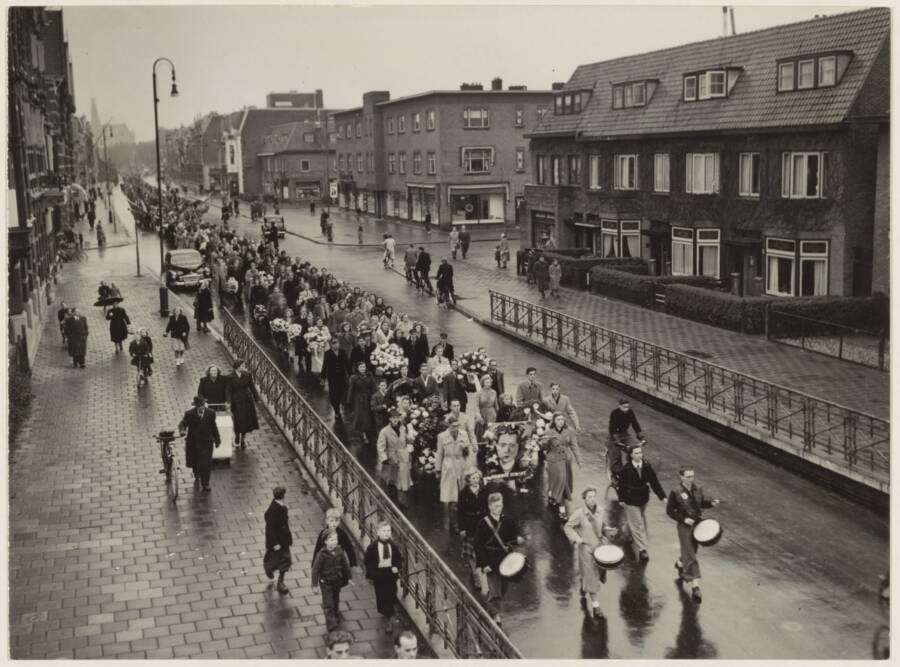 The dunes where Schaft was killed became a mass grave for over 400 Dutch resistance fighters — including Schaft herself. After the war, the Dutch exhumed Schaft’s body and gave her a state funeral before reburying her. Hannie Schaft had been only 24 years old when she died on April 17, 1945.

For years after the war, Freddie Oversteegen visited Schaft’s grave and left behind red roses. And Oversteegen continued to honor her friend even when many of her fellow countrymen and countrywomen didn’t.

Though Schaft was widely hailed as a resistance hero after World War II ended, her legacy suffered during the Cold War due to her communist ties. But by the late 20th century, the Dutch had revisited her story and began to honor her once more for her brave battles against the Nazis.

Most recently in 2020, Deputy Prime Minister Kajsa Ollongren honored her for the 100-year celebration of her birthday. Ollongren said, “Hannie fought for liberty and a society in which everyone has the right to participate. Her life teaches us that we must not look away from the fight against evil.”

After reading about Hannie Schaft, learn about 11 other resistance fighters who took on the Nazis. Then, take a look at the Edelweiss Pirates, the little-known anti-Nazi group of young Germans.