The Blood-Soaked Saga Of Harald Hardrada, The King Of Norway Whose Death Ended The Viking Age

King Harald III Sigurdsson of Norway, better known as Harald Hardrada, traveled as far as Iraq and Sicily before becoming the last Viking king to attempt to seize the English throne in 1066. 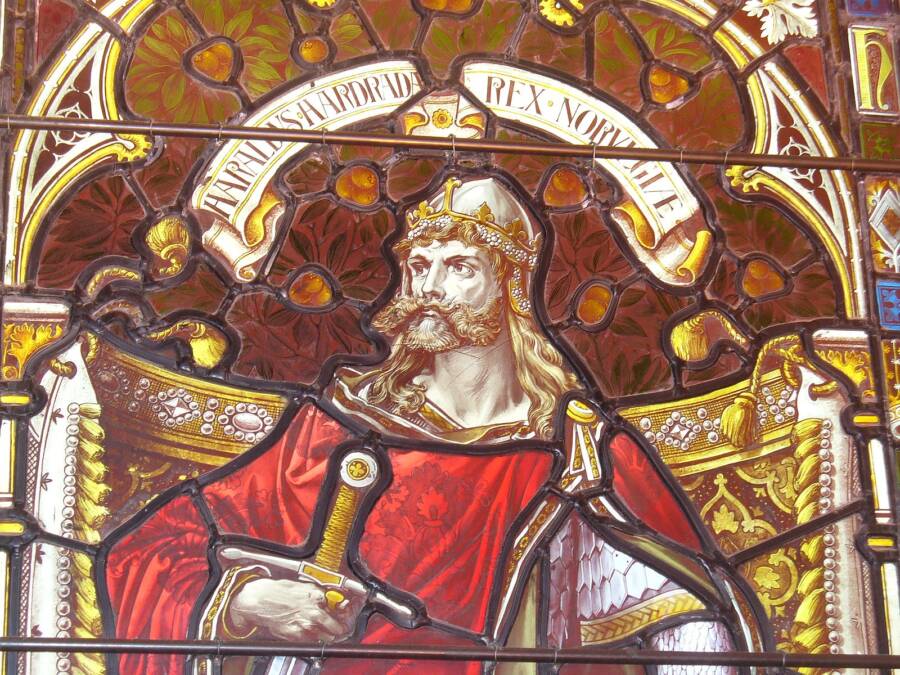 As King of Norway, Harald Hardrada led a horde of Norsemen in an invasion of England to claim the crown in 1066 A.D. And his death in battle was so consequential that it signaled the definitive end of the Viking Age.

Hardrada, whose name translates to “hard ruler” or “resolute,” had proven himself a trustworthy leader with integrity and courage in battles that saw him travel from Norway to Russia, Iraq, Jerusalem, and Sicily. And in September 1066, he arrived on English shores with an arguable claim to the throne and nearly 10,000 men willing to fight for it.

But on Sept. 25, the Vikings were caught off-guard by the English King Harold Godwinson at the Battle of Stamford Bridge by a much larger army than expected. The Norwegians were slaughtered. England never suffered a Viking threat again — and King Harald Hardrada became known as “the last Viking.”

Nonetheless, his campaign had significant ramifications even in failure. Just three weeks later, Godwinson himself was defeated by William the Conqueror of Normandy, ushering in hundreds of years of Norman rule in England and changing the course of history. And on Feb. 25, this whole bloody saga will play out on Netflix in the series Vikings: Valhalla.

The Early Life And Exile Of Harald Hardrada

Born Harald Sigurdsson in 1015 in Ringerike, Norway, the young Viking was raised by his mother, Asta Gudbrandsdatter, and her second husband, Sigur Syr. He shared three half-brothers through Gudbrandsdatter. Chiefly among them was King Olaf II of Norway, who was crowned within months of Hardrada’s birth. 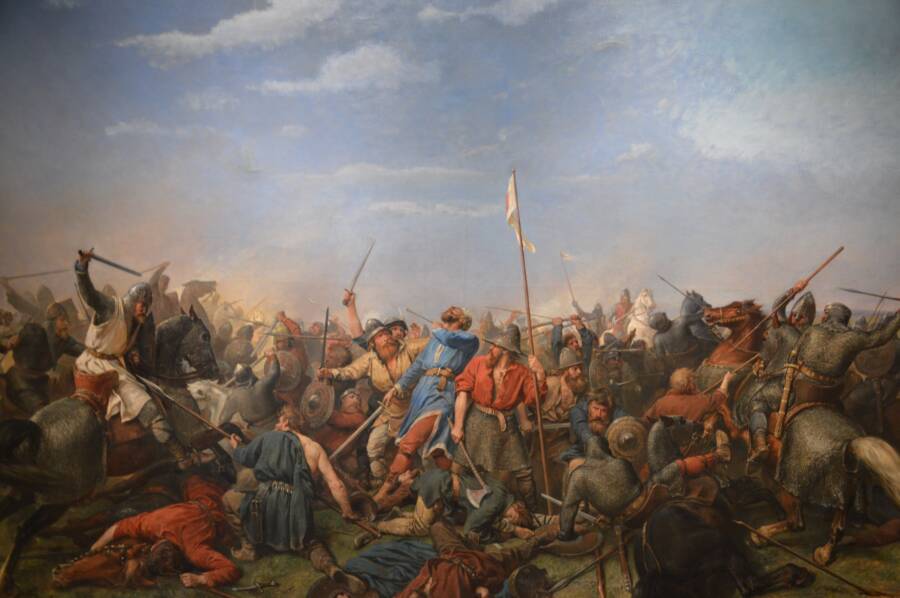 While his epithet of “Hardrada” was rooted in the Norse haròráòi, historical scholars have debated its most precise translation for decades. Though some have argued for “tyrannical” or “tyrant,” as well as “hard ruler” or “ruthless,” other researchers have suggested “severe”— which Harald Hardrada would undoubtedly become.

Hardrada was only 15 years old when he joined his half-brother in a deadly pursuit. King Olaf II had not only been toppled by Cnut the Great of Denmark but also exiled from Norway. Hardrada tried to assist him in his bloody struggle to regain power until the banished king fell in the Battle of Stiklestad in 1030 A.D.

Though he had shown considerable prowess in battle, Hardrada was severely injured. Escaping the Danish onslaught, he went on the run — uncertain if he would die an early death or live to tell the tale.

“From copse to copse I crawl and creep now, worthless,” he wrote. “Who knows how highly I’ll be heralded one day.”

Hardrada sought refuge in Staraya Ladoga, Russia, where Grand Prince Yaroslav the Wise welcomed him with open arms in 1031. Yaroslav’s wife was distantly related to Hardrada, who would later marry their daughter.

But first, Hardrada would serve in Yaroslav’s army for two years, and then travel south — to Byzantium.

How A Viking Warrior Joined The Byzantine Imperial Guard

Sailing along the Dnieper River, Hardrada crossed the Black Sea and arrived in Constantinople in August 1034. The Byzantine capital was then known to Scandinavians as Miklagard, the “Great City,” and had become the very heart of Christendom — with the Eastern Roman Empire at the height of its power, riches, and intrigue. 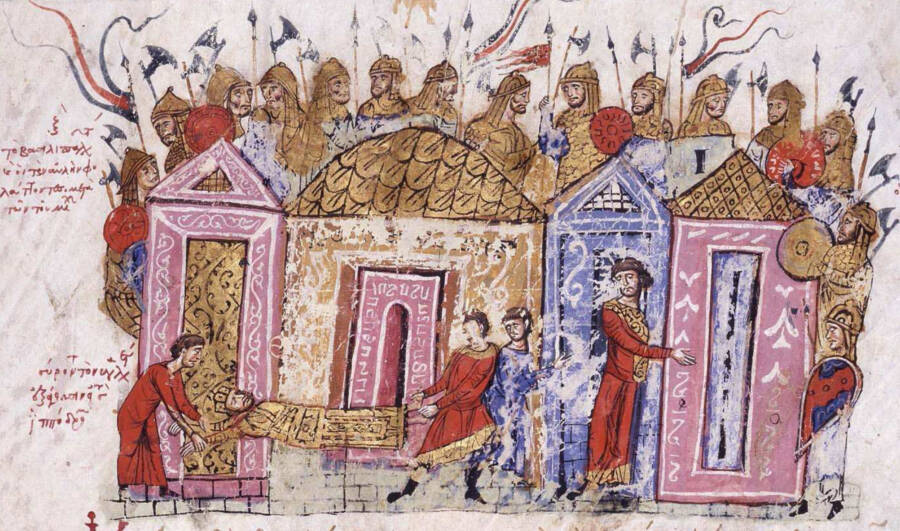 Hardrada had grown into a drifting warrior but found purpose in the Varangian Guard, which was comprised of elite Norse warriors who protected the city and the emperor. With an empire stretching from Italy to Jerusalem, this Scandinavian presence was no surprise nor anomaly. Hardrada joined the guard to bloody adventure.

“They attacked with reckless rage and neither cared about losing blood nor their wounds,” a contemporary source explained. And Harald Hardrada himself was described as “the thunderbolt of the north, a pestilence to all.”

Hardrada spent nearly a decade in the guard, warring against pirates on the Mediterranean Sea and Arab forces in the Parthian Empire. He fought as far east as the Tigris and Euphrates rivers in Mesopotamia and as far west as Sicily, then ruled by an Islamic kingdom.

According to Frank McLynn’s 1066: The Year of the Three Battles, he was “forceful, self-willed, determined, courageous, far-sighted, a talent for war, was attractive to women but was also a ferocious disciplinarian, wildly ambitious and coldly ruthless, greedy and avaricious, with a lust for loot that became legendary.”

Hardrada had indeed amassed fortunes during his time in the Varangian Guard, but he grew impatient at the lack of promotion following years of his service. When Byzantine Emperor Michael IV died in December 1041 A.D., Hardrada fell out of favor in the royal court — and would have to escape after being imprisoned.

Fortunately, he had secured his wealth by shipping his spoils back to Yaroslav the Wise. Hardrada returned to his kingdom in 1042 A.D. and married his daughter Elizabeth. He imparted Yaroslav with vital information to lead an assault on Constantinople but heard troubling news from home and departed for Norway.

In 1045 A.D., Harald Hardrada learned that the son of his half-brother Olaf II, Magnus, had been crowned King of Norway and Denmark. With Hardrada’s new riches, he allied with Sweyn II, pretender to the throne of Denmark, to lead an assault on Magnus. But Magnus, badly in need of money for the royal treasuries, offered a compromise. 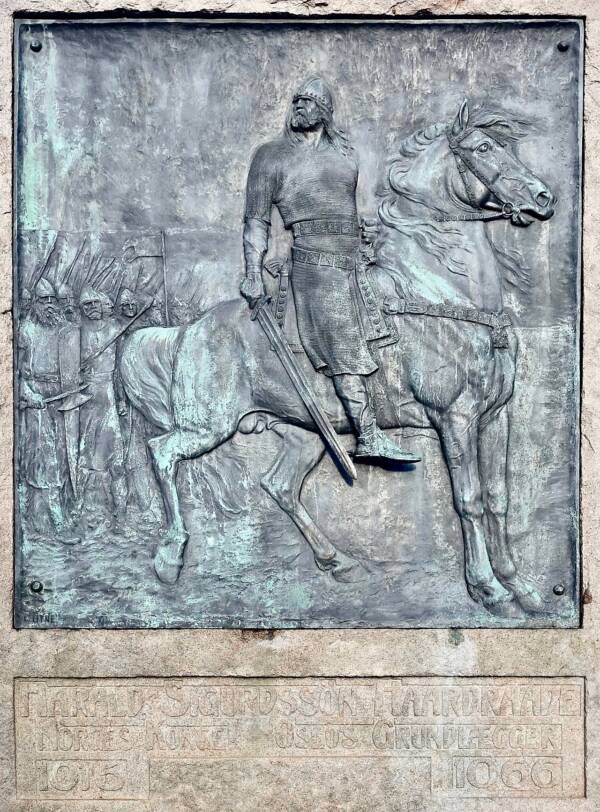 Magnus and Harald would serve as co-rulers of Norway, while Sweyn, whom Magnus had already beaten once in battle, would inherit the Kingdom of Denmark after Magnus’ death. And less than two years later, King Magnus died — making Hardrada the one, true king of Norway.

After the death of his nephew, King Harald III of Norway, as Hardrada became known, realized that he had a valid claim to the English throne. Years earlier, the Norse King of Denmark and England, Harthacnut, had vowed to bestow Magnus with his kingdoms. But Magnus wasn’t interested in England, preferring to focus his efforts on ruling Scandinavia.

Instead, Edward the Confessor, a half-brother to Harthacnut, became King of England. As Magnus’ successor, Hardrada felt cheated. And he had aimed to restore the great “North Sea Empire” established by Harthacnut’s father, Cnut the Great, by uniting the Kingdoms of England, Norway, and Denmark once more.

But when Edward died in 1066 A.D., an English nobleman named Harold Godwinson took the throne. As he would only give it up over his dead body, Hardrada launched an invasion of England with Edward’s estranged brother Tostig — and thousands of troops on hundreds of Viking ships. 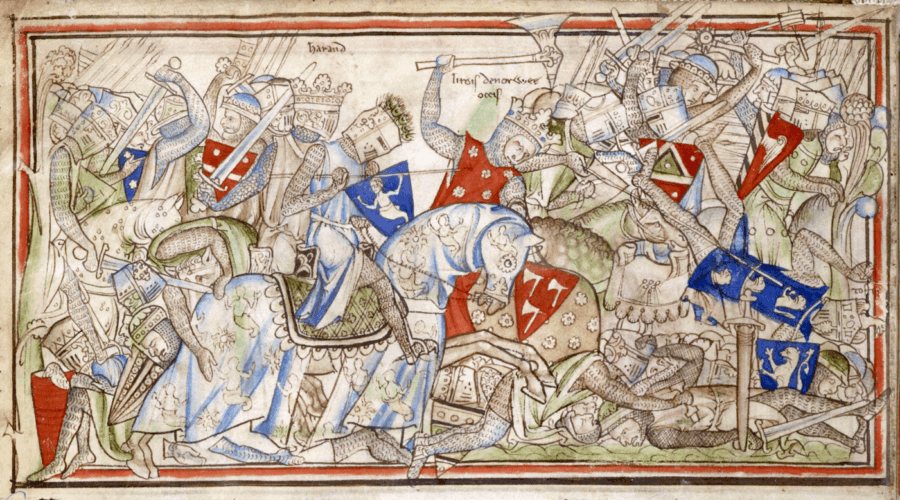 Wikimedia CommonsThe Battle of Stamford Bridge from The Life of King Edward the Confessor by Matthew Paris (13th century).

The audacious effort would ultimately end in disaster at the Battle of Stamford Bridge. Moments before 12,000 men engaged in carnage over the English throne, King Harold cleverly offered to give Tostig back his earldom, provided he capitulated. Loyal to Hardrada, Tostig inquired what the king would bequeath Hardrada.

“Seven feet of English ground, as he is taller than other men,” replied King Harold. It was a generous offer for a grave.

Determined to take the throne, Hardrada plotted a surprise attack on Sept. 25, 1066 A.D. While legend has it that he fought like a true berserker to attain the crown, the Norse leader died trying alongside his trusty Tostig.

Meanwhile, any surviving invaders were given safe passage back to Norway — never to rise again.

After learning about Harald Hardrada, read about 32 Viking facts that reveal one of history’s most misunderstood civilizations. Then, learn about Leif Erikson, the Viking who beat Columbus to America by 500 years.