The Vibrant Life Of Rocky Dennis, The Boy Whose Rare Deformity Inspired The Film ‘Mask’

When Rocky Dennis died at age 16, he had already lived more than twice as long as doctors expected — and lived a fuller life than anyone thought possible. 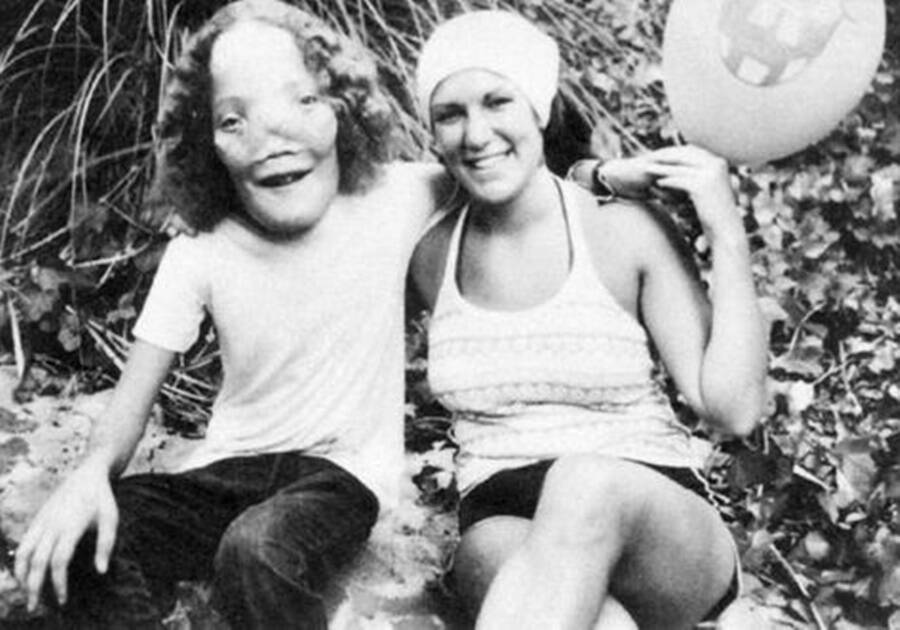 People MagazineRocky Dennis and his mother, Rusty, with whom he shared an incredibly close bond.

Rocky Dennis was born with an extremely rare bone dysplasia which caused his facial bone features to contort and grow at an abnormally fast rate. Doctors told his mother, Florence “Rusty” Dennis, that the boy would suffer multiple disabilities because of his disease, and would most likely die before he turned seven.

Miraculously, Roy L. “Rocky” Dennis beat the odds and lived a nearly normal life until he was 16. This is the incredible story of the boy who inspired the 1985 film Mask.

The Early Life Of Rocky Dennis 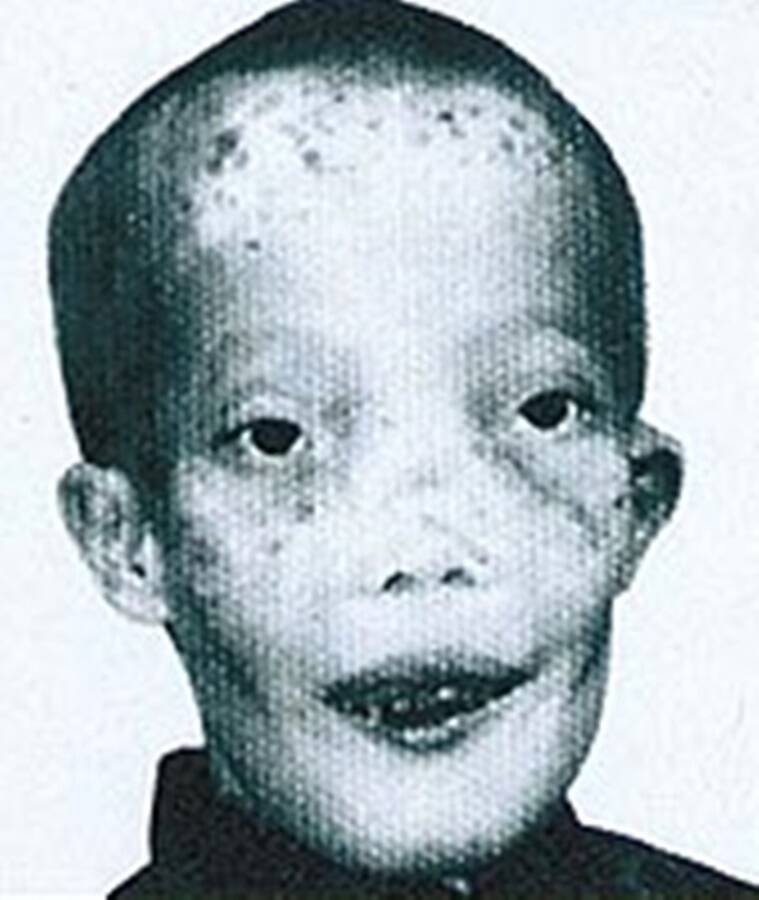 People MagazineThe first signs of Rocky Dennis’ rare condition did not appear until he was a toddler.

Roy L. Dennis, later nicknamed “Rocky,” was born a healthy baby boy on Dec. 4, 1961, in California. He had an older half-brother named Joshua, Rusty Dennis’ child from an earlier marriage, and by all accounts, Rocky Dennis had been perfectly healthy. It wasn’t until Rocky was a little more than two years old that the first signs of an abnormality appeared in his medical exams.

A sharp-eyed X-ray technician caught a slight cranial anomaly in his skull. Soon, his skull began to grow at a shocking rate. Tests at the UCLA Medical Center discovered Rocky Dennis had an extremely rare condition called craniodiaphyseal dysplasia, also known as lionitis. The disease severely distorted his facial features due to his skull’s abnormal growth, making his head twice its normal size.

Pressure caused by the abnormal calcium deposits in Dennis’ skull pushed his eyes toward the edges of his head, and his nose became stretched into an abnormal shape as well. The doctors told his mother Rocky Dennis would progressively become deaf, blind, and suffer a severe mental disability before the weight of his skull destroyed his brain. Based on six other known cases of the disease, they predicted the boy wouldn’t live past seven. 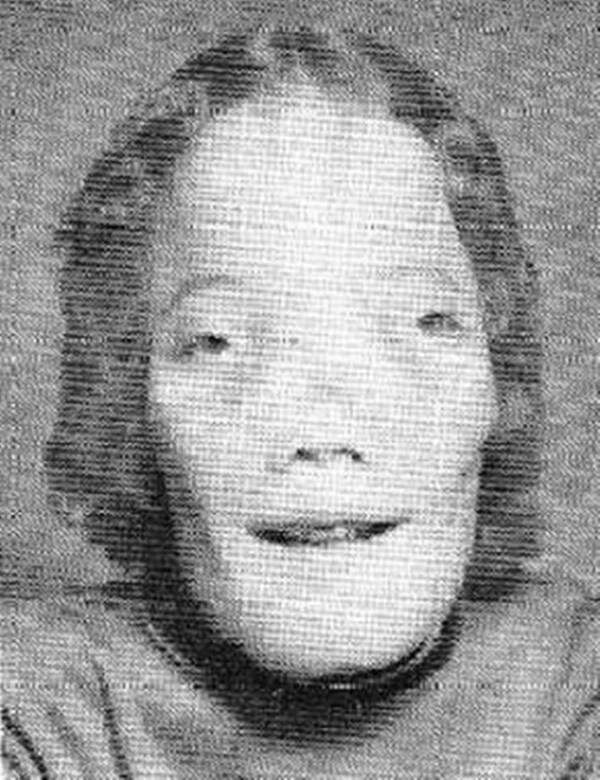 Wikimedia CommonsDespite the life sentence he received from doctors, Rocky Dennis lived a full life well into his teens.

Rusty Dennis, a no-nonsense and street-savvy biker, wasn’t having any of it. She enrolled him in public school at the age of six — against recommendations from doctors — and raised him as if he were any other boy. Despite his condition, Rocky Dennis turned out to be a star student who regularly ranked in the top of his class. He was also popular with the other kids.

“Everybody liked him because he was real funny,” his mother said of her son in an interview with the Chicago Tribune in 1986.

At the Southern California summer camp for handicapped children he attended, Dennis took home plenty of titles and trophies after being voted “best buddy,” “most good-natured,” and “friendliest camper.”

Dennis’ Growing Pains As A Teen

Actor Eric Stoltz as Rocky Dennis in the 1985 film ‘Mask.’

Against all odds, Rocky Dennis survived well into his teens, a feat that can largely be credited to the courage and spirit his mother instilled in him while growing up. As a teenager, he also developed a strong sense of humor about his own condition, often joking about his appearance whenever kids or even adults pointed it out.

“Once he came in from the playground crying because ‘the kids are calling me ugly’ … I told him when they laugh at you, you laugh at you. If you act beautiful, you’ll be beautiful and they’ll see that and love you… I believe the universe will support anything you want to believe. I taught both my kids that.”

According to his mother, Halloween was a special time for Dennis, who would lead a group of neighborhood kids to trick-or-treat. On their candy run, he pulled pranks on unsuspecting neighbors by pretending to wear more than one mask. After taking off the fake mask he was wearing, the candy givers would realize the joke when he would feign surprise when he couldn’t take off his second “mask” after pulling at his own face. “Rocky always got lots of candy,” Rusty raved of her son’s dark sense of humor.

Dennis had a strong sense of self as a teenager even with his severe physical deformity. When a plastic surgeon offered to operate on him so that he could look more “normal,” the teenager declined. 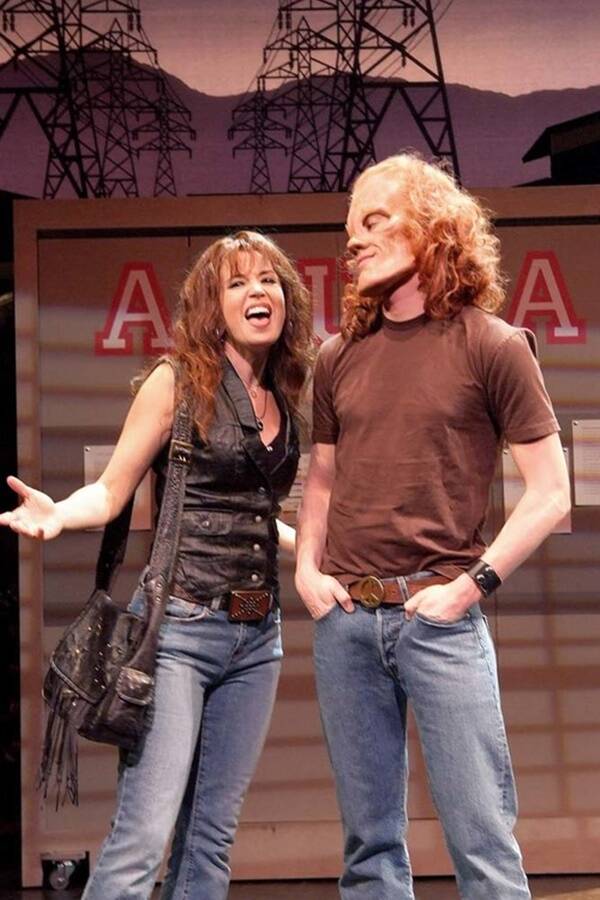 Maggie Morgan DesignThe teen’s story was also adapted into a musical of the same name which premiered in 2008.

Still, kids made fun of his looks, and doctors and teachers always tried to hold him back. In junior high school, his teachers tried to transfer him into a special needs school instead, but his mother wouldn’t allow it.

“They tried to say his intelligence was impaired, but it wasn’t true,” Rusty Dennis recalled. “I think they wanted to keep him out of the classroom because [they thought] it would bother the other kids’ parents.” But Rocky Dennis continued to excel and even graduated junior high school with honors.

Despite living a largely normal life, Rocky Dennis made countless visits to the doctor. By the time he was seven, the boy had made 42 trips just to the eye doctor and gone through countless exams so doctors could monitor his progress.

When Rocky Dennis read a book out loud in front of his eye doctor, who said the boy wouldn’t be able to read or write because he would be blind — Dennis’ 20/200 and 20/300 vision legally qualified him as such — according to his mother Dennis told the doctor, “I don’t believe in being blind.” 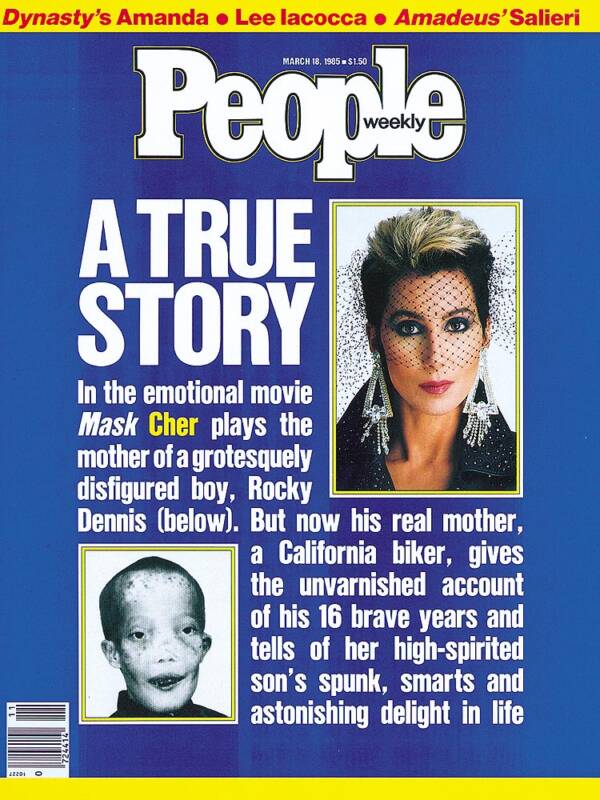 People MagazineRocky Dennis’ extraordinary struggle with his deformity was adapted into the film Mask, starring pop star Cher who played his mother.

His mother gave him natural remedies like vitamins and alfalfa sprouts and raised him on the philosophy of self-healing through force of belief. Whenever his severe headaches happened, she sent Dennis to his room to rest, advising to “make yourself feel better.”

Yet, there was no denying his declining health. His headaches worsened and his physique weakened. So apparent was the change in his usually upbeat demeanor his mother could sense that her son was nearing his end. On Oct. 4, 1978, Rocky Dennis died at the age of 16.

How The True Story Of Rocky Dennis Compares With Mask

Cher’s performance as Rocky Dennis’ mother, Rusty, depicted her strong-will to give her son a normal life.

The spectacular story of Rocky Dennis’ perseverance and the special bond he shared with his mother caught the eye of Anna Hamilton Phelan, a young screenwriter who saw Dennis while visiting UCLA’s Center for Genetic Research.

The result of that encounter was the biopic Mask which premiered seven years after Rocky Dennis’ death. The film, directed by Peter Bogdanovich, starred teen actor Eric Stoltz as the ailing teenager and pop icon Cher as his mother, Rusty. The film won praise from both critics and general audiences.

Because of the complicated prosthetics he donned to play the role, Stoltz often stayed in costume as Rocky Dennis even during filming breaks. According to Stoltz, seeing people’s response as he walked around the boy’s old neighborhood, where the film was shot, gave the actor a glimpse into the late teenager’s life.

“People would not be entirely kind,” Stoltz said. “It was a very curious lesson to walk a mile in that boy’s shoes. Humanity revealed itself to be a bit ugly, at times.” 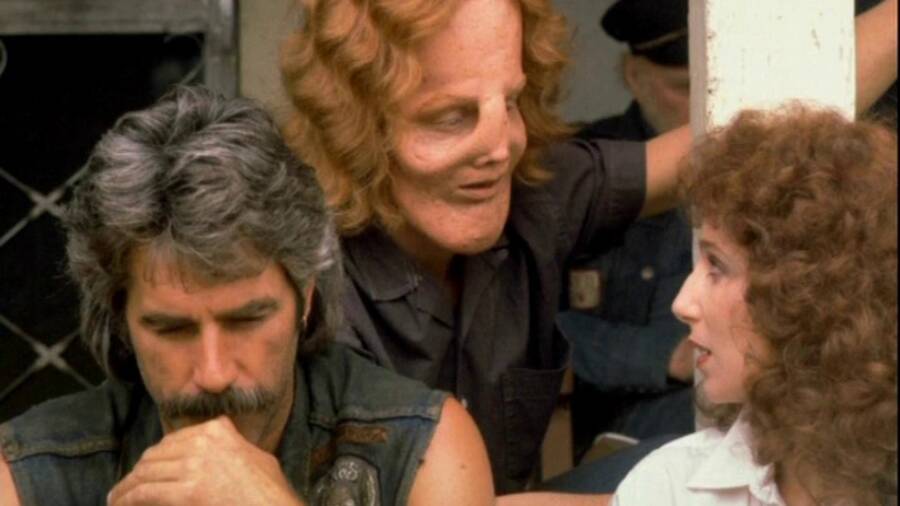 Universal PicturesTeen actor Eric Stoltz, who starred as Rocky Dennis in Mask, received a Golden Globe nomination for his portrayal.

Of course, like any other movie, Mask adjusted some realities for cinematic purposes. For one, the movie didn’t include Dennis’ half-brother, Joshua Mason, who later died from AIDS.

In the movie, Dennis’ mother finds his lifeless body in bed the next morning but in reality, Rusty had been at her lawyer’s office to prepare for her defense against a drug possession charge she was facing. She was told of her son’s death by her then-lover and later husband, Bernie — portrayed by Sam Elliott in the movie as Garr–, who called her to deliver the tragic news. 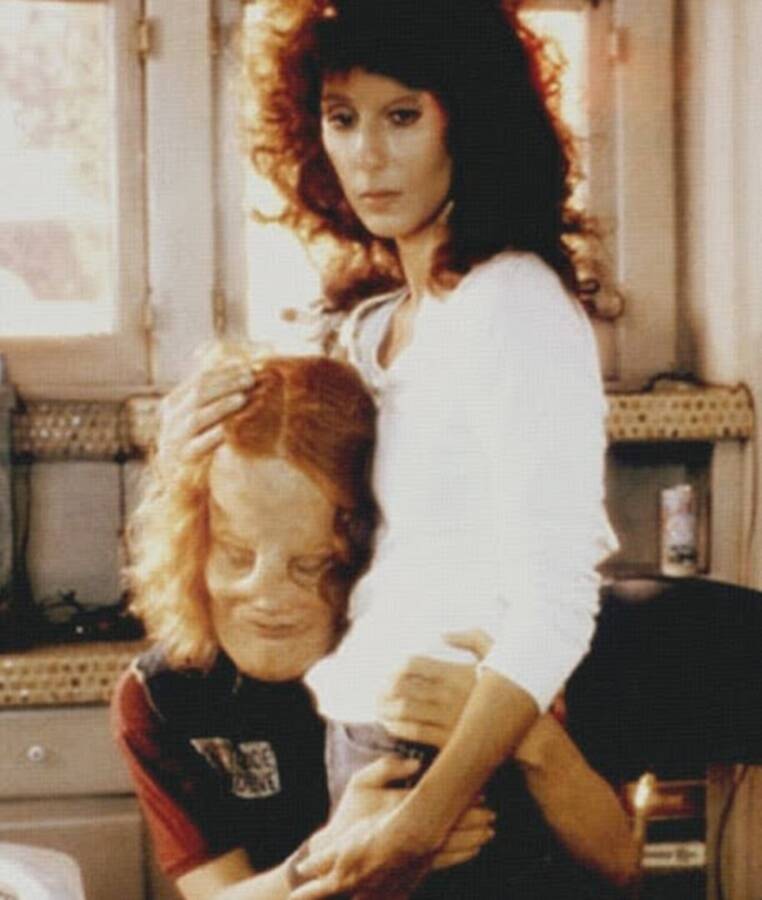 In the film, Rocky Dennis is buried with baseball cards tucked into the flowers on his grave but his body was actually donated to UCLA for medical research and later cremated.

Rocky Dennis didn’t get to live a long life but he lived it to the fullest. Through his humor and gentle tenacity, the teenager showed others that anything is possible so long as you believe in yourself.

“It’s been scientifically proven that energy can’t be destroyed—it just takes another form,” his mother said after his death.

Now that you’ve read the fascinating life of Rocky Dennis, the deformed teenager who inspired the movie Mask, meet Joseph Merrick, the tragic “Elephant Man” who just wanted to be like everybody else. Next, learn the truth of Fabry disease, the condition which made a 25-year-old seemingly age backwards.