The Real Story Of Harry Haft, The Jewish Boxer Who Was Forced To Fight For His Life During The Holocaust

While imprisoned at Auschwitz, Harry Haft was ordered to fight other prisoners for the entertainment of the Nazi guards before he escaped and became a professional boxer in the United States. 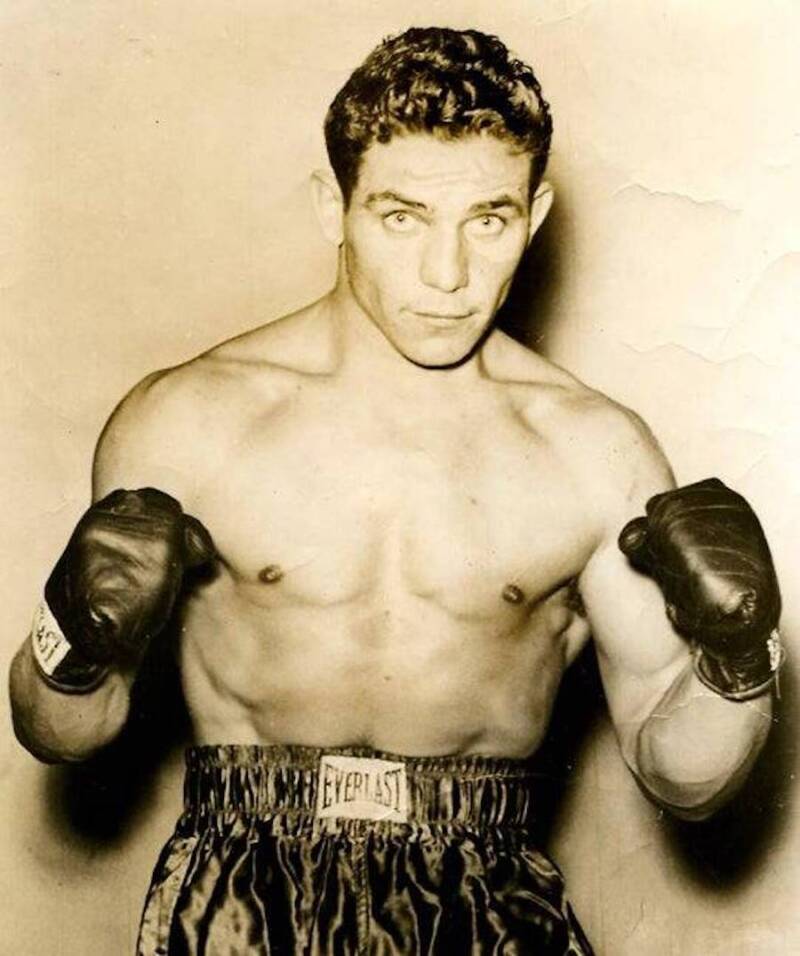 During World War II, many people imprisoned in Nazi concentration camps across Europe had to fight tooth and nail to stay alive. And for Harry Haft, the fight was literal.

Imprisoned as a teenager, Haft was frequently forced by his guards to fight his fellow inmates. Every Sunday for months on end, he faced new “challengers” and fought for the entertainment of Nazis. But losing a battle resulted in more than a bruised ego — losers were often executed.

Though Haft survived the camps — and went on to try to box professionally — the trauma he suffered during the war followed him all his life. In the end, he spent his life fighting the past as well as the present.

Go inside the harrowing true story behind HBO’s The Survivor and learn what really happened to Harry Haft.

Born Herschel or Hertzka Haft on July 28, 1925, “Harry” Haft grew up in Belchatów, Poland, as the youngest of eight siblings. There, antisemitism pervaded his young life. Haft faced discrimination at school and was expelled for throwing a rock at an antisemitic teacher at a young age. 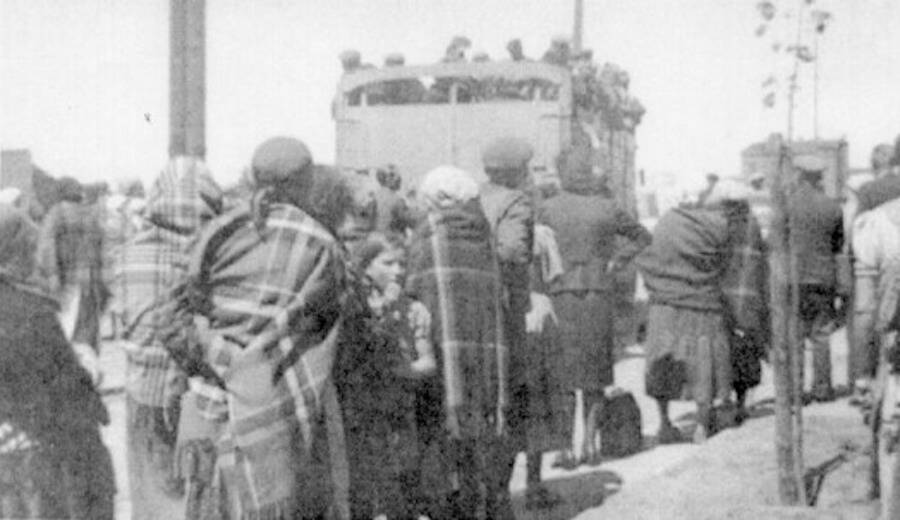 United States Holocaust Memorial Museum Photo ArchivesCitizens of Belchatów, Poland watch as Jewish prisoners are taken away by Nazi soldiers to the concentration camps in 1941.

Still, Jewish men in Belchatów met the news that they needed to register with the police in June 1941 with uneasy confusion. According to Harry Haft: Survivor of Auschwitz, Challenger of Rocky Marciano, written by Haft’s son, Alan Scott Haft, Haft’s brother Aria thought it was maybe for work.

But when Aria didn’t come back from registration, Haft — a month shy of his sixteen birthday and thus not required to register — went to find him.

He found all the Jewish men of their town who had registered corralled at the firehouse. There, Haft made a life-changing decision. He created a distraction so his brother could escape. But When Aria fled, the Nazi guards caught Harry.

That very evening, Harry Haft was loaded onto a truck — and sent to the first of many concentration camps.

Nazis Forced Harry Haft To Fight For His Life

Following their “registration,” Harry Haft and the other men from his town were sent to slave labor camps in Poznan, in western Poland. The Nazi guards divided him and the others into two groups, arbitrarily waving them “left” or “right.” Haft went to the left. He never saw the men sent right ever again.

Next, he went to a camp near Lodz, Poland. And then, as Haft recalled to the United States Holocaust Memorial Museum (USHMM), “from there, we were shipped to Auschwitz.”

According to Haft’s son’s book, when one of the other prisoners asked where they were going, a Nazi guard replied, “To your grave.” Haft and the others were sent to the Jawozna Camp, one of the many subcamps of Auschwitz. But there, Harry Haft had a dubious lucky break.

“I made friends with a German officer and we made a deal,” Haft told the USHMM. “He will get me through the German time and I will get him through after the war.” 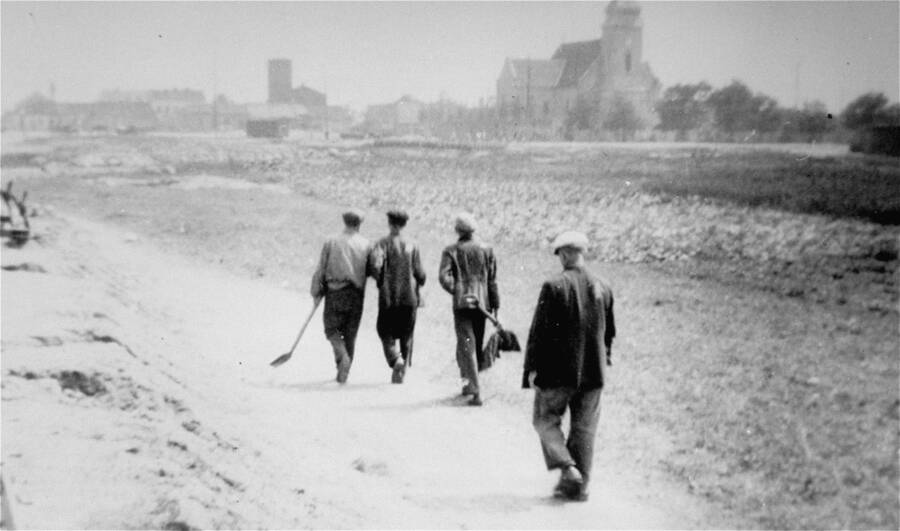 The German officer came up with a plan to have Haft fight other inmates. Every Sunday, for months, Haft faced “half-dead” opponents — and battered them for the entertainment of the Nazi guards.

“As a youngster in school, I was already training to be a boxer,” Haft explained to the USHMM. “I was very powerful.”

Harry Haft fought 76 fights in front of leering guards who called him the “Jewish Animal.” He won every single one, learning that the guards cheered more loudly when he brutally defeated his opponent. “They didn’t respect me,” Haft told the USHMM. “We were just survivors, entertaining them.”

But these fights were more than entertainment. “In Jawozna, the fight was to the finish,” Haft said.

In other words, Haft would live another day if he won. But the person he fought, once defeated, was often executed.

“And out of the 76, he would’ve had to have known some of them,” his son Alan Scott Haft explained. “Because when they rounded people up, they rounded you up with people from your hometown.”

At one point, Haft had a more formidable opponent — a French heavyweight champion who, like him, had been kept relatively healthy by the Nazi guards. But Haft defeated him too. Afterward, he remembered hearing the sound of two shots. And he never saw the Frenchman again.

In all, Harry Haft spent about five years in concentration camps. But as the war started to turn against the Nazis in early 1945, Haft took his chance to escape. While on a death march, he killed a German soldier, put on his uniform, and fled.

“He killed a German officer to get his uniform, and then he killed many people at farmhouses he stopped at along the way,” explained Haft’s son, adding, “He described it all very casually.”

The True Story Behind “The Survivor”

Following the war, Harry Haft kept fighting. At a Displaced Persons Camp, he signed up for a boxing tournament in Munich — and won the Heavyweight Championship. Haft was also named the “outstanding boxer” of the tournament and was given an award by the American General Lucius Clay.

He soon afterward made his way to the United States on a ship called the Marine Marlin. Haft married an American woman, Miriam, had children, and tried to make it as a boxer in the United States.

Haft won 14 of his 22 fights over his two years as a professional boxer. But Haft’s career ended after losing to heavyweight champion Rocky Marciano. However, he would later claim that several mobsters came into his locker room shortly before the match and threatened his life if he didn’t lose.

There was also a larger fight that Haft couldn’t win. As the years passed, Haft’s experiences during World War II continued to torment him. His son Alan remembers his father as a terrifying, violent presence when he was growing up in Brooklyn, New York. 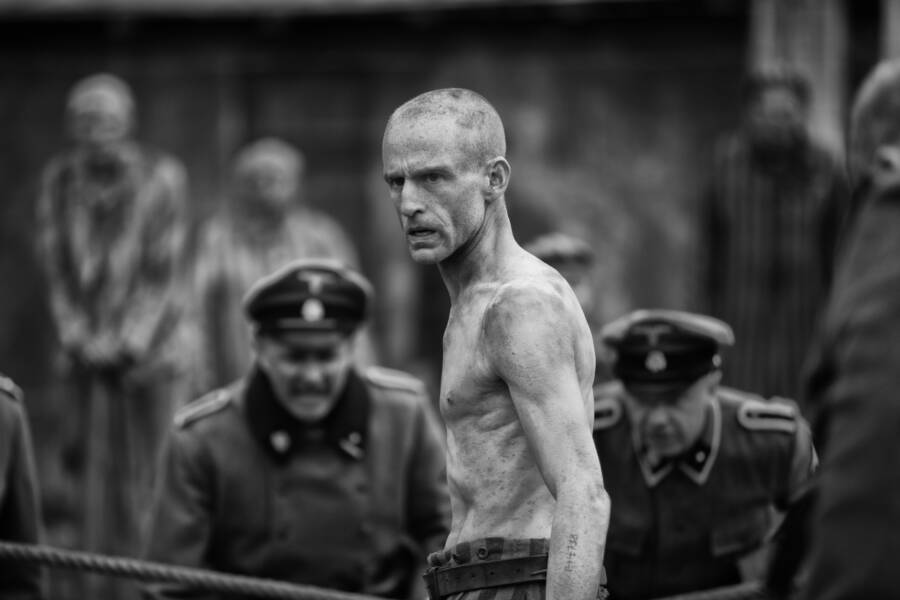 HBOBen Foster as Harry Haft in the 2021 film The Survivor.

“I grew up in the United States in the 1950s with a father who couldn’t speak much English, couldn’t read and write, who you couldn’t really talk to because he might explode at any time,” Alan explained.

“He had psychotic episodes that could end in violence. One time he broke every window in the house. And I couldn’t object to anything, otherwise, I’d get beaten. So it was crazy.”

All the while, Harry Haft remained tight-lipped about what he’d seen and done during the Holocaust. Once, on a family vacation, he told his son, “One of these days I’m going to tell you everything.” But Haft wouldn’t tell his story for four more decades.

Eventually, he sat down with Alan and explained it all: his childhood in Belchatów, what he’d done to survive in the concentration camps, and how he made his way to the United States. Alan turned his father’s stories into a book, Harry Haft: Survivor of Auschwitz, Challenger of Rocky Marciano, which came out in 2003, four years before Haft died of cancer.

The story struck a chord. Haft’s impossible decisions during the Holocaust caught the eye of a German graphic novelist named Reinhard Kleist, who adapted Alan’s book into a graphic novel called The Boxer. And now, his story has been adapted into the HBO film The Survivor, starring Ben Foster as Harry Haft.

Today, Harry Haft’s story is a gripping reminder of what it took to survive during the Holocaust. As a teenager alone in the concentration camps, Haft only had his fists — and his desperate will to live.

After reading about Harry Haft, look through these photos of Jewish life before the Holocaust. Or, discover the story of the Jewish parachutists who went behind Nazi lines during World War II.