The purpose of the event was to “encourage people to go after their desires and not feel shame.”

The week began with the workshop “Protection Methods: Condoms, IUDs, the Pill, Oh My!” on Monday, and will continue until Nov. 12th.

She said that the purpose of this event was to “encourage people to go after their desires and not feel shame.”

“Come up front guys, were gonna have some dirty fun,” Natasha said to students filed into the lecture hall.

One student was wearing a hot dog costume to the workshop. 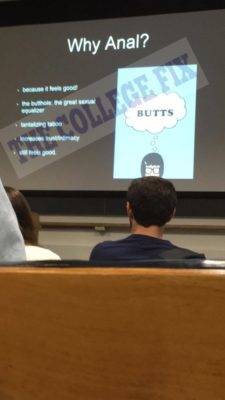 She explained, “Not all men have penises, not all women have vaginas. The butthole is the great sexual equalizer. All humans have a butthole.”

The crowd appeared enthusiastic and asked many detailed questions of the lecturer.

She went on to say, “You couldn’t be fucked in the ass in Texas until about 10 minutes ago.”

Showing off one butt-plug sold at her shop, Natasha exclaimed, “a local guy named Greg makes these—salt of the Earth!”

Sex Week at Harvard/FacebookImage from a “Sex Week” lecture in 2016.

The event closed with a raffle for expensive sex toys, including butt plugs and vibrators, as well as free giveaways of male and female condoms, sex toy cleaners, and literature from Planned Parenthood.