His mother said, "I wanted him to study and make a name for himself, but destiny had something else in store."

In an incredible feat of flexibility, a Pakistani teenager can turn his head 180 degrees.

Muhammad Sameer Khan, of Karachi, Pakistan, is a 14-year-old teenager capable of turning his head 180 degrees with the help of his hands, reported the Daily Pakistan.

He is also able to rotate his shoulders 360 degrees.

These bizarre skills are the result of years of training for Khan.

“I would have been six or seven when I saw an actor in a Hollywood horror movie turning his head to look behind him,” Khan recalled. “It fascinated me. I started practicing for it and within few months, I was able to do it.”

He remembered how early on his mother would chide him for manipulating his head, “My mother slapped me when she saw me doing this and told me never to do it again as I might end up hurting my neck but with time she realized that I’m God gifted.”

Khan uses his insane flexibility as a dancer with his group: Dangerous Boys. 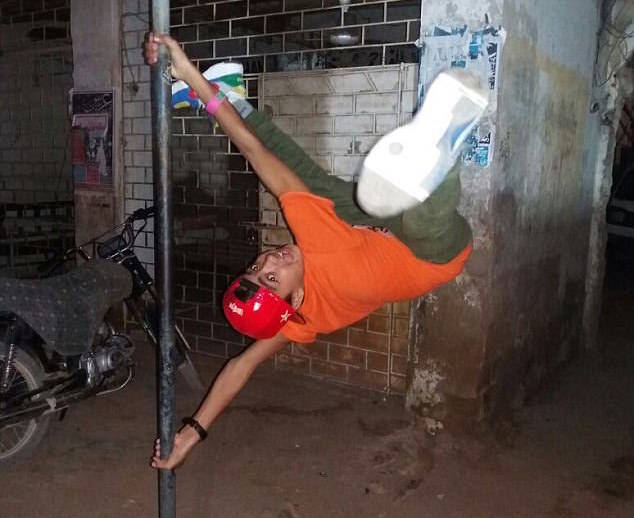 Asher Khan, the lead dancer of Dangerous Boys, said, “I was shocked when I first saw Sameer’s ability to rotate his neck and shoulders. He is incredible.”

Since his father fell ill and was unable to work, Sameer Khan dropped out of school to work full time for the dance group.

He makes around $130 to $150 a month from his performances, enough to keep his family afloat.

His mother Rukhsana Khan, 45, said, “He is only a kid but we have no other option. I wanted him to study and make a name for himself, but destiny had something else in store.”

For now, Khan said, “I work so that I can support my family. I don’t want my four sisters to have to quit their studies due to a lack of resources.”

He hopes one day to appear in Hollywood movies, just like the actor that first inspired him.

“I am working on my dance skills, gymnastic stunts and acting skills as well in order to find better work opportunities to support my family and fulfill my dream,” Khan says. “I hope to show my talent in big screens someday.”

Next, check out these ten utterly insane human records. Then, read about the ‘Demon Goat’ with a human-like face that terrified an Indian village.