An Abandoned Scottish Village Just Hit The Market For $173,000 — But Locals Say It’s Haunted By The Lady Of Lawers

According to local lore, the 17th-century Lady of Lawers was a Gaelic soothsayer who predicted the village's demise, and her ghost still roams the ruined site. 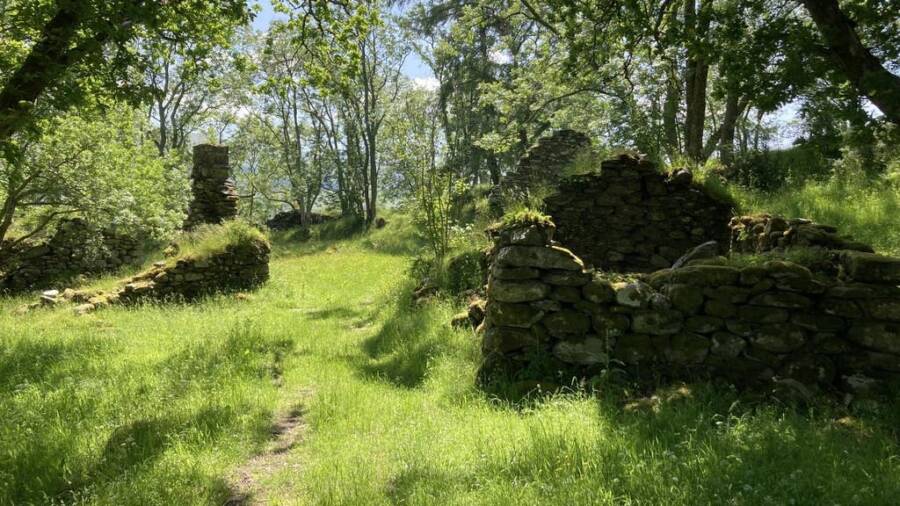 Goldcrest Land And Forestry GroupRuins of the Old Village of Lawers, Scotland.

For £125,000, interested buyers can purchase the picturesque Old Village of Lawers along Loch Tay the Scottish Highlands. The village, mostly ruins, contains a private beach, grassy lands, and (allegedly) the ghost of a woman who claimed she could see the future.

According to local history, she was the Lady of Lawers, wife of the laird, and her name was Mary Campbell. The daughter of Sir James Campbell, she lived in Lawers in the mid-17th century.

During that time, the Lady of Lawers made a number of predictions in her native Gaelic. Many of them came true, which led people to respect her as someone could see the future.

For example: As the townspeople prepared to build a church in 1669, Campbell predicted that “the ridging stones shall never be placed on the roof of the church.”

And, sure enough, a storm whipped up and sank the boat carrying the stones.

On another occasion, she planted an ash tree near the church and declared: “when [the tree] reaches the height of the gable the church will split asunder.”

So, no one was that surprised when — in 1833 — the tree grew and the church roof collapsed. A thunderstorm damaged the church to such an extent that villagers stopped using it. 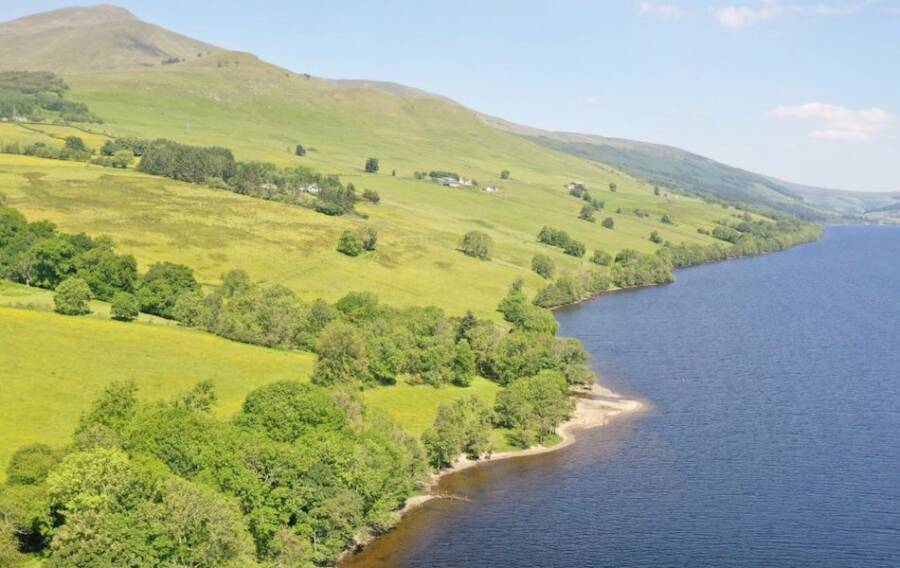 Goldcrest Land And Forestry GroupThe shores of Lawers are picturesque but allegedly haunted.

It could be dangerous to discard the Lady of Lawers’ predictions. The seer, apparently fond of her ash tree, warned that “evil will come to him who harms the ash tree.”

A local farmer named John Campbell ignored her omen. He cut down the tree in the 1870s. Soon afterward, Campbell’s assistant went mad, his horse dropped dead, and his own bull gored him to death.

Significantly, the Lady of Lawers also may have predicted the Highland Clearances. These sweeping evictions forcibly removed people living in the Scottish Highlands in the 18th century.

“The land will first be sifted, then riddled of its people,” the Lady of Lawers warned. “The jaw of the sheep will drive the plow from the ground. The homesteads on Loch Tay will be so far apart that a cock will not hear its neighbor crow.” 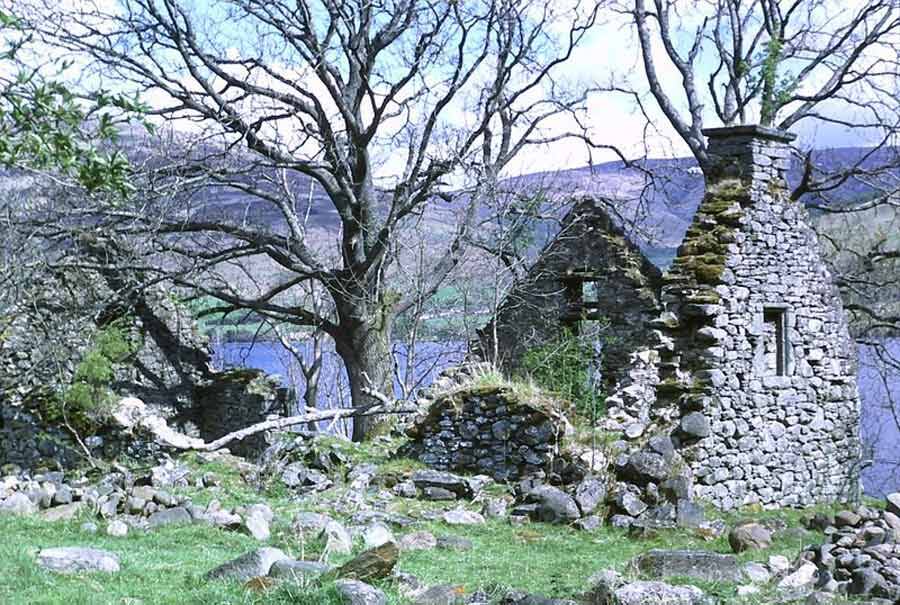 Kim Traynor/Wikimedia CommonsMany of the stone structures in the Old Village of Lawers have been abandoned for at least 150 years.

But the Lady of Lawers’ predictions weren’t merely local ones. She foresaw “fire-coaches crossing the Drumochter Pass,” which some believe meant the railroad, And indeed, today’s Highland Main Line railroad takes the pass through the rugged terrain. She also described a “ship driven by smoke” long before the invention of steamships.

Not all her predictions came true, however. At least, not yet. Three of the Lady of Lawers’ predictions remain unfulfilled. She claimed that: “A strange heir will come to Balloch when the Boar’s Stone at Fearnan topples over.” To date, the enormous squat stone in Fearnan has yet to fall.

She also mused that: “A ship driven by smoke will sink in the loch with great loss of life.” Although steamships once zipped around Loch Tay, none met a tragic end — though there are plans to resume tourist boat service on the loch after the last ships stopped running in 1949.

And, finally, she predicted that: “The time will come when Ben Lawers will become so cold that it will chill and waste the land for seven miles.”

Ben Lawers, the highest mountain in the southern part of the Scottish Highlands, is certainly cold — but hasn’t yet become so cold to fulfill the Lady of Lawers’ prophecy. 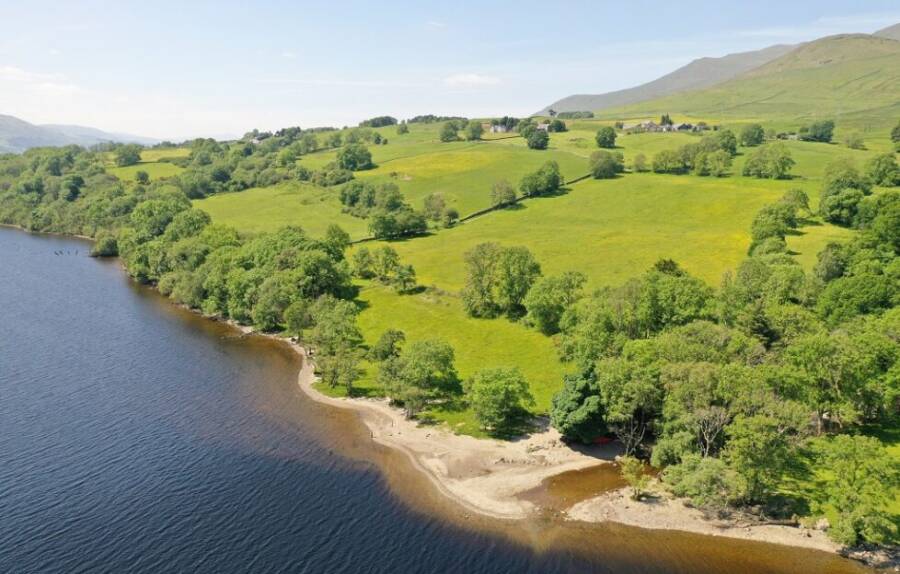 Goldcrest Land And Forestry GroupA view of the private beach in the Old Village of Lawers. The modern town of Lawers can be seen on the hilltop.

That said, the village of Lawers — haunted or not — is certainly charming. It stretches across three green acres and includes a paddock, semi-ancient woodlands, crumbling stone ruins, and private beach on Loch Tay, which is ripe with trout, for which the buyer will receive fishing rights.

Among the ruins are the 1669 church, a stone mill and kiln, and the former House of Lawers, where the Laird and Lady of Lawers lived (and perhaps the Lady still does).

“This is an extremely rare opportunity to buy a part of Scotland’s heritage in one of the most beautiful places in the country,” said Jon Lambert, whose agency, Goldcrest Land and Forestry Group, is overseeing the sale of the Old Village of Lawers.

“The sale offers a unique chance to be the owner and custodian of an area wonderfully rich in history, romance, and tradition.”

The village of Lawers is beautiful. But prospective buyers may want to double-check the predictions of their ghostly neighbor Mary Campbell — just in case.

After reading about the haunted Scottish village for sale, learn about these five failed doomsday prophecies. Or, discover 11 of the most haunted places in the world.