25 Stunning Photos Of Hegra, The Ancient City That Sat Untouched For 2,000 Years

Built by a pre-Islamic society in what is now Saudi Arabia, Hegra was the second city of the Nabataean kingdom. 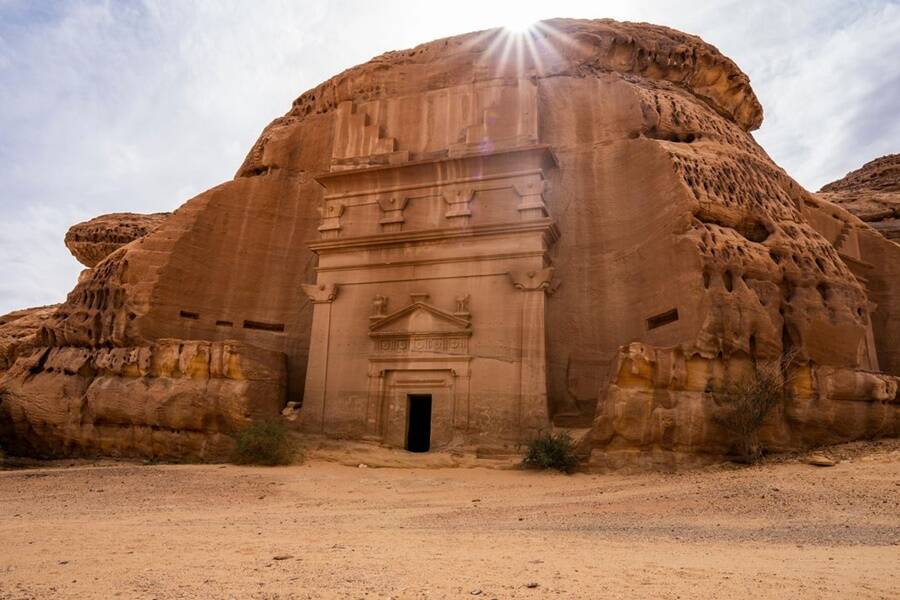 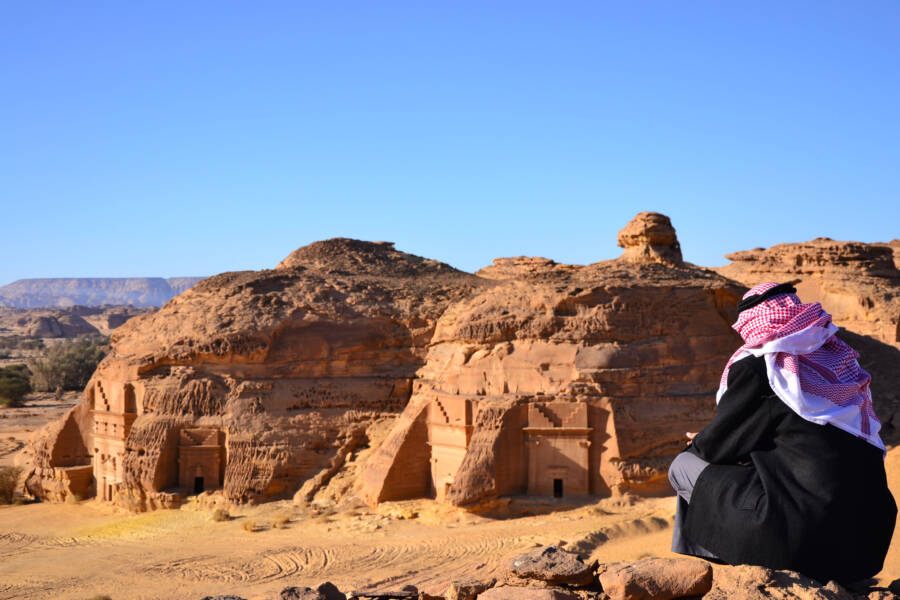 "It should evoke in any good tourist with any kind of intellectual curiosity: Who produced these tombs? Who are the people who created Hegra? Where did they come from? How long were they here? To have the context of Hegra is very important."Wikimedia Commons
12 of 26
There's no doubt that the Nabataeans are the most famous former residents of the area, but they were not the only people who made their mark there.flickr/SammySix
13 of 26
Several different ancient languages have been found inscribed throughout the landscape, including epigraphic traces of Lihyanite, Thamudic, Latin, and Greek.Wikimedia Commons
14 of 26
But of all the people who lived in the region, the Nabataeans are without doubt the most mysterious.Wikimedia Commons
15 of 26
Aside from their rock carvings and their mastery of trade, the Nabataeans were also known for their innovations with hydraulics — building water pipes around many of the ancient tombs.Wikimedia Commons
16 of 26
"These people were creative, innovative, imaginative, pioneering," Graf said. "It just blew my mind."Wikimedia Commons
17 of 26
Of course, much remains unknown about the ancient kingdom. But for many tourists, this just makes their visit even more intriguing.Royal Commission for AlUla
18 of 26
One of the main reasons why tourists are now allowed to visit is the Saudi Vision 2030, a plan for Saudi Arabia to focus more on tourism and trade and shift away from a dependency on oil.Wikimedia Commons
19 of 26
Along with diversifying the economy, Saudi Arabia also hopes to promote its national identity. Wikimedia Commons
20 of 26
There are even plans to build a subterranean luxury resort nearby the Hegra site.Wikimedia Commons
21 of 26
The resort, named Sharaan, is expected to be open to the public by 2023.Wikimedia Commons
22 of 26
Interestingly, the resort's design is said to pay homage to the Nabataeans — by using light and shadow in architecture.Wikimedia Commons
23 of 26
Even though much of the hotel will be subterranean, there will also be glimpses of daylight found throughout the structure.Royal Commission for AlUla
24 of 26
While Petra is still a more famous Nabataean site than Hegra, perhaps this new initiative will help put the latter more on the map as well.Wikimedia Commons
25 of 26
There's no doubt that Hegra would make for a unique travel destination — especially for those who love exploring ancient places.Wikimedia Commons
26 of 26 Thousands of years ago, Hegra was a bustling trade hub in the Nabataean kingdom. Though it was left abandoned for about two millennia, the site still features the astounding architecture left behind — most of which was carved into cliffs. The structures have drawn comparisons to another ancient city called Petra, which was also built by the Nabataeans.

Other than this similarity, much of Hegra's appeal is centered around the fact that it has remained virtually unknown — until now. For the first time in 2,000 years, the ancient city of Hegra in Saudi Arabia is open to the masses.

A look inside the ancient city of Hegra, which is now open to the public.

According to the Smithsonian Magazine, Hegra (sometimes called Mada'in Saleh or Al-Hijr) is an important archaeological site for researchers who are trying to unlock the mysteries of an ancient empire.

Hegra boasts 111 monumental tombs with intricate carvings, some of which date back to the 1st century B.C. The decorated facades reflect a wide range of cultural influences, including classical Greek and Roman architecture.

There's no doubt that the Nabataeans are the most famous former residents of the area, but they were not the only people who made their mark there. Several different ancient languages have been found inscribed throughout the landscape. In addition to Nabataean, epigraphic traces of Lihyanite, Thamudic, Latin, and Greek have also been uncovered in the area.

"For a tourist going to Hegra, you need to know more than seeing the tombs and the inscriptions and then coming away without knowing who produced them and when," said David Graf, a Nabataean specialist, archaeologist, and professor at the University of Miami.

"It should evoke in any good tourist with any kind of intellectual curiosity: Who produced these tombs? Who are the people who created Hegra? Where did they come from? How long were they here? To have the context of Hegra is very important."

Clearly, there is still much unknown about the kingdom. But even though there are relatively few remains left behind, Hegra still plays an important role in unlocking the mysteries of the Nabataeans.

Who Were The Nabataeans?

Hegra is the biggest archaeological site preserved from the civilization of the Nabataeans south of Petra in Jordan. The Nabataeans were some of the most enigmatic ancient peoples — and they're mostly known today for Petra (which was featured in Indiana Jones and the Last Crusade).

The civilization of the Nabataeans was an intriguing one. Before they built their thriving empire, they were simply desert-dwelling nomads. But the Nabataeans ultimately succeeded through their mastery of trade. At one point, they controlled the routes through Arabia and Jordan stretching to places like Egypt, Mesopotamia, Syria, and the Mediterranean.

They dealt in everything from spices to aromatics, including ginger root, sugar, peppercorn, frankincense, and myrrh. Such commodities were highly prized for cooking and religious ceremonies during antiquity, and so Nabataean became a very wealthy kingdom.

The kingdom remained a sizable influence in the region from the 4th century B.C. until the 1st century A.D., when the Roman Empire began to expand further and subsume more land, including that of the Nabataeans.

"The reason we don't know much about them is because we don't have books or sources written by them that tell us about the way they lived and died and worshipped their gods," said Laila Nehmé, an archaeologist and co-director of the Hegra Archeological Project, which is a collaboration between the French and Saudi governments to excavate the site.

"We have some sources that are external, so people who talk about them. They did not leave any large mythological texts like the ones we have for Gilgamesh and Mesopotamia. We don't have their mythology."

The Future Of Hegra

The ancient city is no longer closed in order to accommodate research. So not only is the site ready to welcome visitors, there are also plans to build a subterranean luxury resort nearby. This is likely in anticipation of the large crowds that will surely travel to Hegra in the future.

Saudi officials are actively moving toward accomplishing the Saudi Vision 2030 initiative, which was initially announced by the Crown Prince Mohammed bin Salman in 2016. This initiative intends to help the country diversify its economy, shifting away from its dependency on oil and shifting more toward trade and tourism over the next couple of decades.

With the new tourist visas that the country launched in September 2019, it looks like the government is already taking major steps to reach its goal. What effect this will have on historical sites like Hegra remains to be seen.

Now that you've had a glimpse inside the ancient site of Hegra, read about the ancient Trojan city recently uncovered by archaeologists. Next, take a look at these fascinating photos of Jerusalem before the foundation of Israel.