The Incredible True Story Of Henry ‘Box’ Brown, The Virginia Slave Who Mailed Himself To Freedom

In 1849, Henry Brown shipped himself 250 miles to the free state of Pennsylvania. Though it took him 27 grueling hours, he lived the remainder of his life as a free man and a traveling performer. 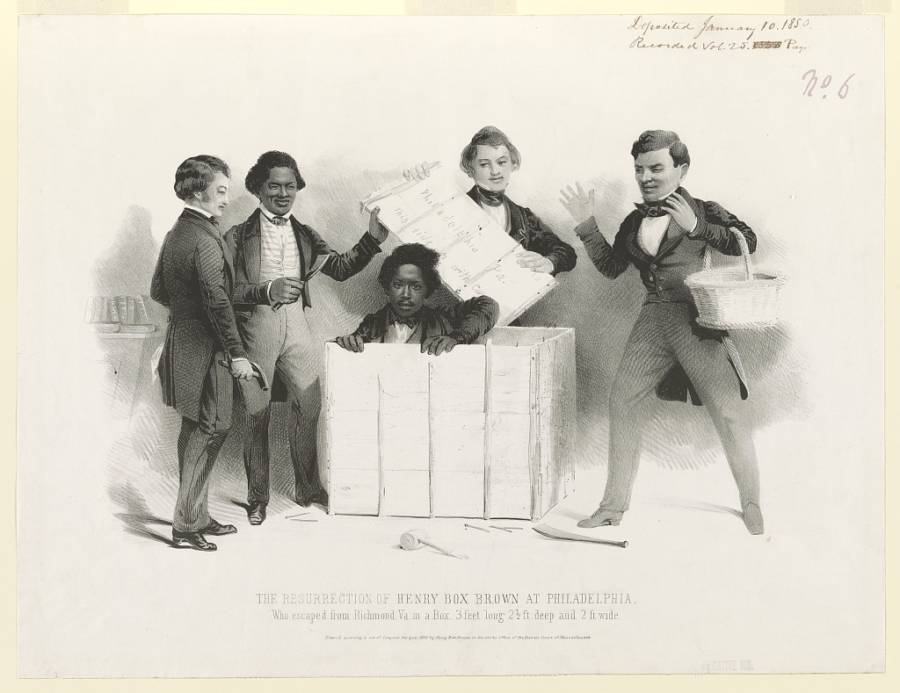 Library Of CongressIn this lithograph published around 1850, Henry “Box” Brown emerges from a box in the office of the Pennsylvania Anti-Slavery Society.

Henry “Box” Brown was a man that had everything torn from him. Born into slavery and separated from his family in a series of inhumane sales, Brown found himself utterly alone by his early 30s. But in a fateful vision, he saw his road to his salvation through a small box.

With the aid of his allies, Brown defied the odds in 1849 by embarking on a harrowing journey to freedom — within a box postmarked to a free state. This is the unbelievable true story of the slave who mailed himself to freedom.

As A Boy, Henry Box Brown Was Separated From His Family

Henry Box Brown was born in 1815 in Louisa County, Virginia. He spent his early years at the Hermitage, a plantation about 10 miles from Yanceyville in Louisa County, with his parents, his four brothers, and his three sisters. His owner was John Barret, the former mayor of Richmond, Virginia. Barret was known to be atypical in how he treated slaves.

Brown described Barret in his autobiography, Narrative of the Life of Henry Box Brown, as “uncommonly kind.”

“As he moved about in his dignity he seemed like a god to us, but notwithstanding his kindness although he knew very well what superstitious notions we formed him, he never made the least attempt to correct our erroneous impression, but rather seemed pleased with the reverential feelings which we entertained towards him.”

When John Barret was on his deathbed, he sent for Henry Brown and his mother. Believing that their family was going to be freed, the pair came to their owner with “beating hearts and elated feelings.” Barret’s son had freed 40 of his own slaves several years earlier, however, Barret informed them that they were being allotted to his other son, William Barret, and that they should be obedient to him instead.

Barret claimed that his son promised to treat the Browns with kindness, but what Barret critically ignored was the fact that he was splitting up the Brown family as they were divvied up among his four sons.

Brown’s mother and sister Martha were part of William Barret’s inheritance, but Brown himself was sent to work in a tobacco factory in Richmond at the age of 15. Martha Brown eventually became William Barret’s mistress.

Brown’s Wife And Children Were Sold From Under Him 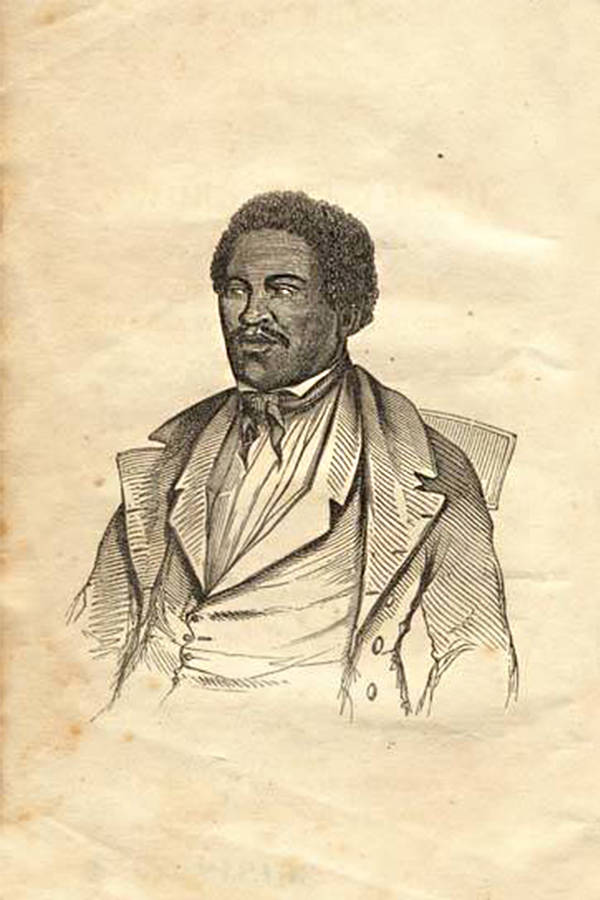 Though he was torn from his family, Brown managed to find love. Now in his early 20s, Henry Box Brown fell in love with a slave girl named Nancy. She was the slave of a man called Mr. Leigh, a bank clerk. Brown went to Clark and asked for permission to marry her and also asked that he and Nancy not be sold away from one another.

Mr. Leigh assured Brown that he would do no such thing. Brown recalled that Leigh “promised faithfully that he would not sell her, and pretended to entertain an extreme horror of separating families.”

And so in 1836, Brown and Nancy became husband and wife in Richmond, Virginia. They eventually produced three children together and joined the First African Baptist Church. Henry even joined the church choir. He became a skilled tobacco worker and earned enough money to rent a home.

But in August of 1848, Mr. Leigh reneged on his word and sold Nancy and their three children to another slave owner in North Carolina. Brown was not told about what Mr. Leigh had done until it was far too late. He recalled the event later:

“I had not been many hours at my work, when I was informed that my wife and children were taken from their home, sent to the auction mart and sold, and then lay in prison ready to start away the next day for North Carolina with the man who had purchased them. I cannot express, in language, what were my feelings on this occasion.”

Nancy, who was pregnant, and their three children were sold along with 350 other slaves to a slave-trading Methodist minister. Brown begged his master to stop the sale of his family, but Leigh coldly told him that “you can get another wife.”

The Desperate Man Embarked On A Daring 250-Mile Journey 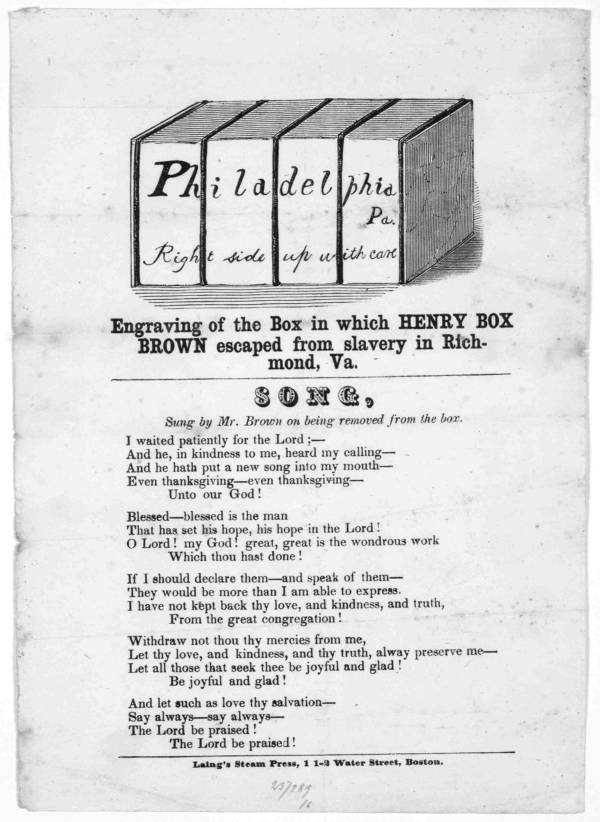 Library Of CongressPrinted on this broadside are the lyrics of a song Henry Box Brown supposedly sang after having had himself shipped from Richmond to Philadelphia in March 1849.

After mourning the loss of his family for several months, Henry Box Brown came to the decision that he had to win his freedom — and he stumbled on his escape plan while engaged in prayer.

“The idea suddenly flashed across my mind of shutting myself up in a box, and getting myself conveyed as dry goods to a free state,” he later wrote.

Brown immediately secured the help of a freed black man and a member of his choir to aid in his escape. A white shoemaker named Samuel Smith was also was instrumental in his dangerous journey. Ironically, Smith himself owned slaves. Smith put Brown in contact with James Miller McKim, a leader of the Philadelphia chapter of the Pennsylvania Anti-Slavery Society who was involved with the Underground Railroad.

Brown then hired a carpenter to construct the box, which was three feet long, two feet wide, two and a half feet deep, and lined with a coarse woolen cloth. It had just three small air holes near where his face would be that would allow him to breathe. A prominent sign was attached that read “This Side Up With Care.”

The journey would be an arduous one. Once inside the box, Brown would be unable to shift his position, and he’d have to stay silent for the 247 miles from Richmond to Philadelphia.

Nonetheless, on March 23, 1849, Henry Box Brown slipped inside his claustrophobic box to be shipped across the States. Within hours of the shipment, however, the box was placed upside down. The box continuously switched positions, but in one harrowing instance, it almost killed him. Brown recounted his terrifying experience:

“I felt my eyes swelling as if they would burst from their sockets; and the veins on my temples were dreadfully distended with pressure of blood upon my head. In this position I attempted to lift my hand to my face but I had no power to move it; I felt a cold sweat coming over me which seemed to be a warning that death was about to terminate my earthly miseries.”

Yet he persevered, and 27 hours later, he arrived in Philadelphia. 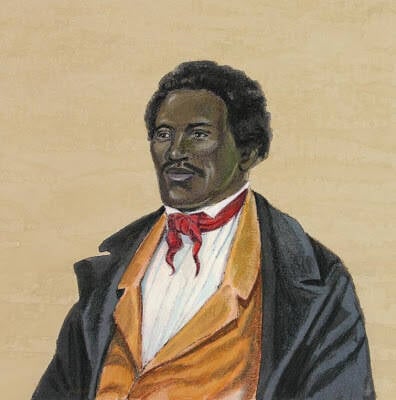 After he arrived at freedom in 1849, Brown became a well-known speaker for the Massachusetts Anti-Slavery Society, and it was at one of the society’s conventions that he was nicknamed “Box” for his ingenious escape.

He went on the lecture circuit across the States speaking about his journey. He made something of a show out of it, even bringing with him a moving panorama on which he displayed his escape and preached anti-slavery.

But some abolitionists, like Frederick Douglass, were not so enthusiastic about Brown’s show. Douglass reportedly wished that Brown had not publicized his escape so that other slaves could have used it to get to freedom as well.

In fact, Brown ruffled a few feathers among the abolitionist community. He was especially criticized when he was contacted by his family’s new owner who offered to sell his wife and kids back to him but Brown refused.

In 1850, he moved to England where he continued to tour and present his anti-slavery panorama. He tried his hand at acting and even became a magician for a time before remarrying and returning to the States as a traveling performer.

The last record of Henry Box Brown is an advertisement for one of his shows in 1889, and he is believed to have died in Toronto, Canada, on June 15, 1897.

After learning about Henry Box Brown, check out Cudjo Lewis, the last slave brought to America. Then, read about how Ellen and William Craft also ingeniously escaped bondage by posing as a slave and his master.