At the close of the Persian Gulf War, American forces carried out a 10-hour bombardment on Highway 80 that left hundreds dead and destroyed up to 2,700 vehicles. 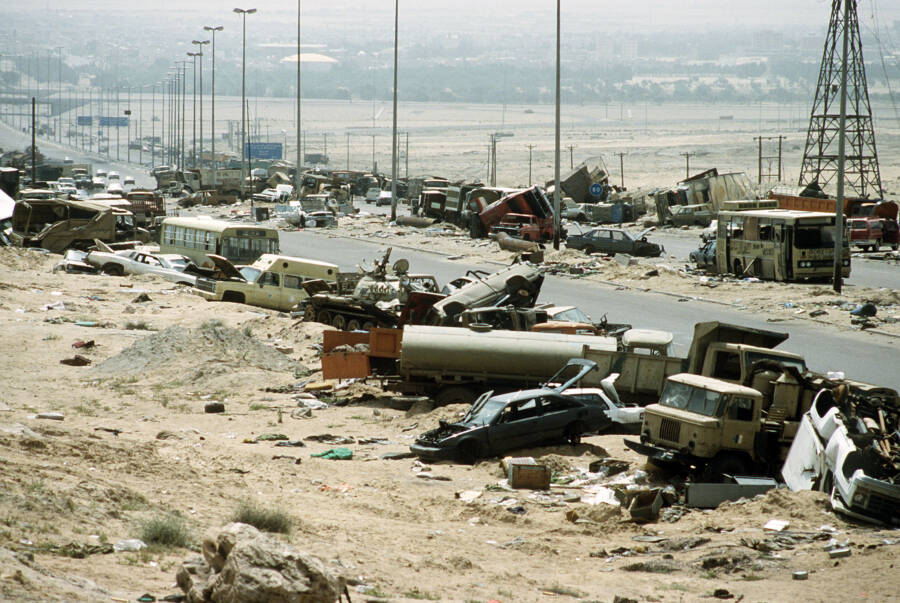 Public DomainAbandoned vehicles line the “Highway of Death” in Iraq. 1991.

In the waning days of the Gulf War, thousands of Iraqi soldiers attempted to flee from Kuwait along Highway 80. But U.S.-led coalition forces were waiting — and they turned the route into the so-called “Highway of Death.”

After trapping the Iraqi convoy on the road between Kuwait and Iraq, the coalition forces rained down hell. For 10 hours, they bombed the vehicles below in what one U.S. soldier described as “shooting fish in a barrel.”

Once the dust settled, hundreds of Iraqis were dead. Burnt-out vehicles littered the highway. And a debate began over whether the forces had been justified in bombing a retreating army — or if they’d massacred Iraqi soldiers attempting to conduct a peaceful withdrawal.

This is the story of the Highway of Death and the bloody bombardment of Iraqi troops that marked the end of the Gulf War.

The Beginning Of The Gulf War

The dominoes that led to the Highway of Death began to fall on Aug. 2, 1990, when Iraqi President Saddam Hussein invaded the neighboring country of Kuwait with 140,000 troops. As the Miller Center reports, Iraq’s invasion had to do with longstanding tensions between the two countries. But the invasion swiftly became an international incident with far-reaching implications.

As HISTORY explains, the majority of the 21-country Arab League condemned Hussein’s invasion of Kuwait and asked for support from NATO. Just a few days later, on Aug. 5th, U.S. President George H. W. Bush told the press: “This will not stand, this aggression against Kuwait.”

As attempted peace deals were furiously bartered behind the scenes, a U.S.-led coalition prepared to drive back Iraq’s invasion. In November, the United Nations Security Council warned that Iraq had until January to withdraw. When Iraq refused, the Gulf War began in earnest on Jan. 17, 1991, with Operation Desert Storm. 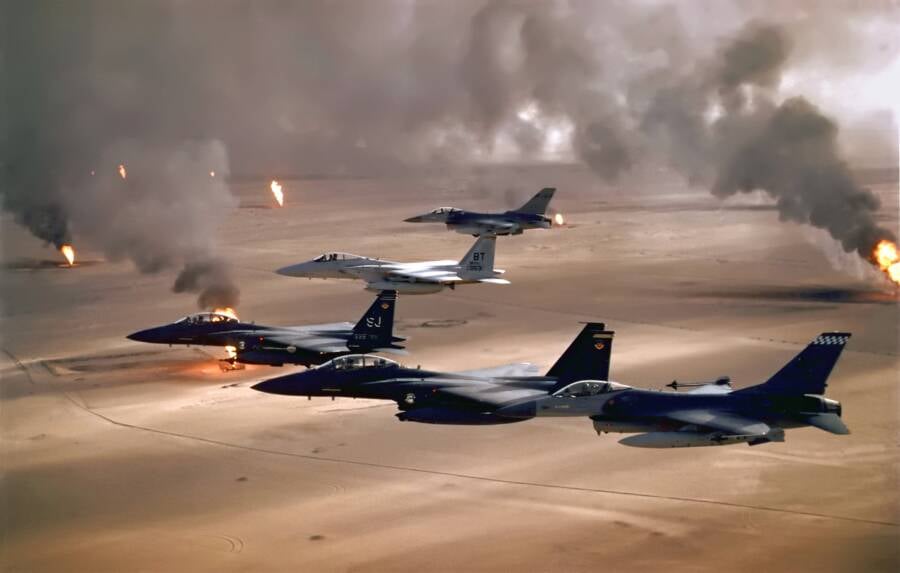 Having swiftly wiped out Iraq’s air defenses, the U.S.-led coalition next turned its attention to Kuwait and southern Iraq. Specifically, the coalition targeted a highway — Highway 80 — that connected the two countries. That stretch of road would soon become known as the Highway of Death.

The 10-Hour Bombardment Of The “Highway Of Death”

In August 1990, Iraqi troops used Highway 80 — which connects the Iraqi city of Basra to Kuwait City — to invade Kuwait. Six months later, they used the same stretch of road to flee. But this time, coalition forces were waiting.

On Feb. 26, 1991, Atlas Obscura reports that U.S. aircraft bombed the head and tail of the retreating convoy, trapping up to 3,000 trucks, cars, jeeps, ambulances, tanks, and other vehicles along Highway 80.

Then, they started dropping bombs on the traffic jam they’d created. Commander Frank Sweigart, a U.S. Navy pilot, told the Washington Post that the Iraqis were “basically just sitting ducks.” 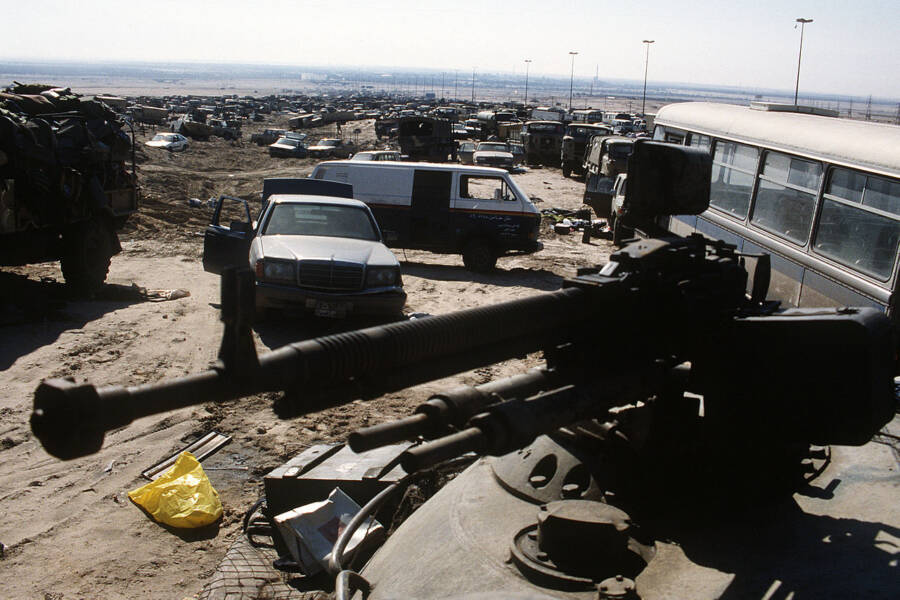 Public DomainThousands of vehicles were trapped along Highway 80, which became known as the “Highway of Death” following a lengthy bombardment.

For 10 hours, forces dropped bomb after bomb. Though some of the soldiers expressed pity for the Iraqis trapped below, most told the Washington Post that the retreating army deserved it.

“I think we’re past the point of just letting [Saddam Hussein] get in his tanks and drive them back into Iraq and say, ‘I’m sorry,'” U.S. Air Force Lt. Col. George Patrick said between missions. “I feel fairly punitive about it.”

Staff Sgt. Casey Carson agreed, telling the Washington Post that the invasion of Kuwait was “like a robbery” and the U.S-led coalition was “the police force,” saying: “[T]hese guys got caught trying to burglarize a house.”

Sweigart told the Washington Post that he had mixed feelings about the bombardment of Highway 80, however, saying:

“One side of me says, ‘That’s right, it’s like shooting ducks in a pond. Does that make me uncomfortable? Not necessarily. Except there is a side of me that says, ‘What are they dying for? For a madman’s cause? And is that fair?’ Well, we’re at war; it’s the tragedy of war, but we do our jobs.”

Indeed, the 10-hour bombardment of the Highway of Death was seen by some as a massacre. Iraq claimed that the troops were trying to comply with orders from the U.N. by peacefully withdrawing from Kuwait. American military spokesmen, however, claimed that the soldiers were retreating from battle, which made them fair targets. 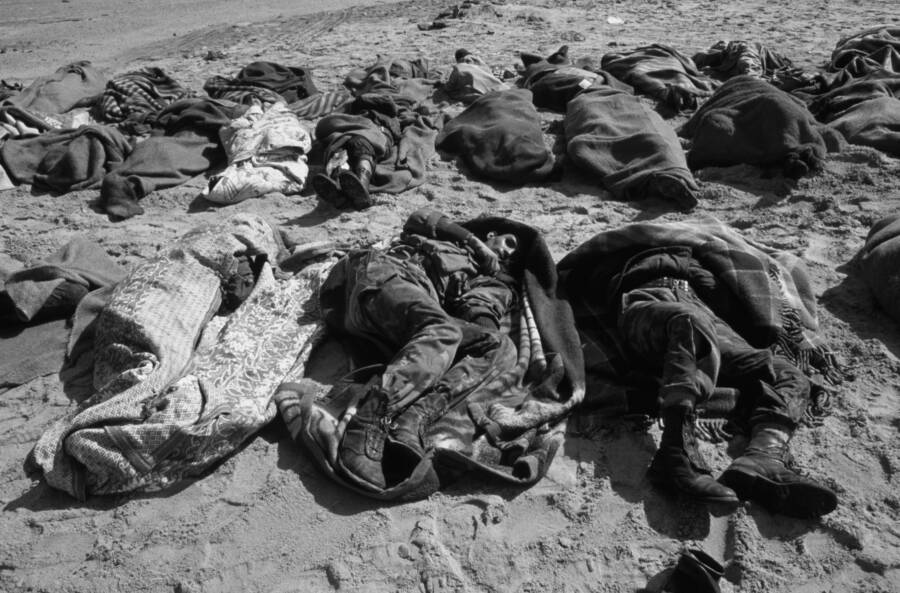 Peter Turnley/Corbis/VCG via Getty ImagesBodies of Iraqis who attempted to flee Kuwait and died along the Highway of Death.

“Saddam Hussein has described what is occurring as a withdrawal,” Brigadier Gen. Richard Neal said, according to the Washington Post. “By definition, a withdrawal is when you pull your forces back, not under pressure by the attacking forces. Retreat is when you’re required to pull your forces back as required by the action of the attacking forces. The Iraqi army is in full retreat.”

Whether a withdrawal or a retreat, the movement of Iraqi troops marked the end of the Gulf War. A few days later, on Feb. 28th, a ceasefire was declared.

The Legacy Of The Highway Of Death

Pictures of abandoned vehicles along the Highway of Death soon became some of the most defining images of the Gulf War. Burned out and abandoned, some of them still containing bodies, they eerily captured the utter destruction that had been rained down on Iraqis by coalition forces.

To date, it’s unknown how many people died during the bombardment. Estimated casualties generally range in the hundreds, as historians believe that many Iraqis were able to flee the highway as bombs fell. But memories of the Highway of Death long endured.

As VICE reports, images of the highway were so compelling that they made their way into video games decades later. In Call of Duty: Modern Warfare (2019), a similar attack takes place, though that one is led by Russians.

Today, Atlas Obscura reports that the Highway of Death looks like any other desert road. But its role in history didn’t quite end in 1991. Twelve years later, U.S. and British troops used the same stretch of highway during their invasion of Iraq in 2003.

After reading about the Highway of Death, look through these stunning photos of Saddam Hussein’s extravagant palaces. Or, go back in time with some of the most iconic images from the 1990s.