The nuclear shadows of Hiroshima were scorched into the city by the blinding light of the atomic bomb as it detonated over the city on August 6, 1945. 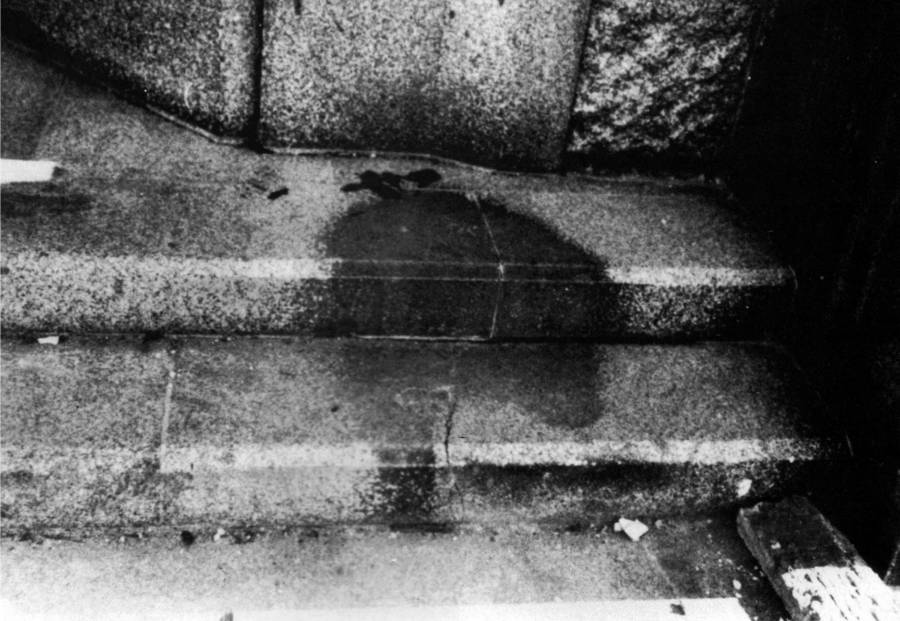 Universal History Archive/UIG via Getty ImagesThe nuclear shadow of a Hiroshima man eerily scorched onto the stone steps of a local bank.

When the world’s first atomic bomb used in warfare detonated over Hiroshima the morning of Aug. 6, 1945, a resident was seated on the stone steps outside of the Sumitomo Bank. In their right hand they clutched a walking stick, their left may have been across their chest.

But seconds later, they were incinerated in the boiling light of an atomic bomb. In their place was a shadow that served as a horrifying relic of their final moments.

In fact, throughout the center of Hiroshima were a myriad of haunting outlines from window panes, valves, and even people in their last seconds. Etched on buildings and sidewalks now were the nuclear shadows of a city about to be obliterated.

They serve as macabre reminders of the hundreds of thousands who were lost in this unprecedented act of war.

The Nuclear Shadows Of Hiroshima 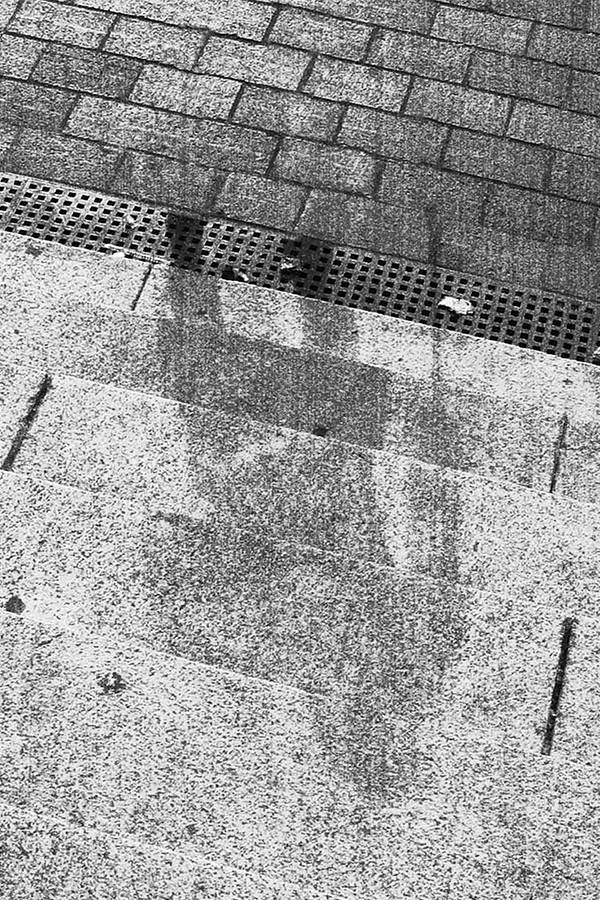 When the atomic bomb “Little Boy” detonated 1,900 feet above the city, a flash of brilliant, boiling light scorched all that it touched. The surface of the bomb burned 10,000 degrees Fahrenheit and anything within 1,600 feet of its blast zone was incinerated in an instant. Anything within a mile radius of its impact site was reduced to rubble.

The heat from the explosion was so intense, in fact, that it also bleached everything in its blast zone, leaving eerie nuclear shadows of human detritus where citizens once were.

The Sumitomo Bank was located just 850 feet from where Little Boy collided with the city of Hiroshima. Whoever was seated there had been obliterated. 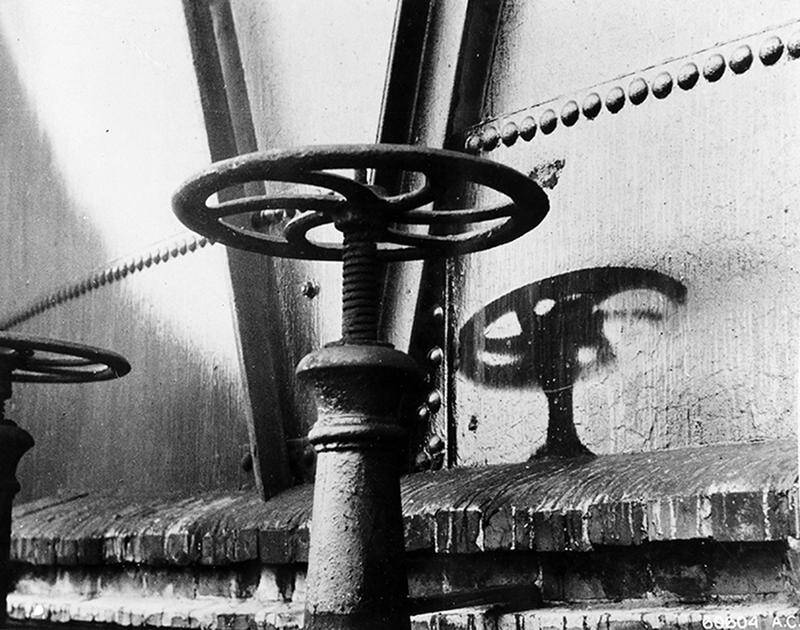 Getty ImagesThe intricate shadow of a knob on a pipeline.

According to the Hiroshima Peace Memorial Museum, the Hiroshima shadows weren’t left by people alone. Any object that was in the way of the blast was imprinted onto its background, including ladders, windowpanes, water main valves and bicycles.

Even if there was nothing in the way, the heat itself left behind imprints, marking the sides of the buildings with waves of heat and rays of light. 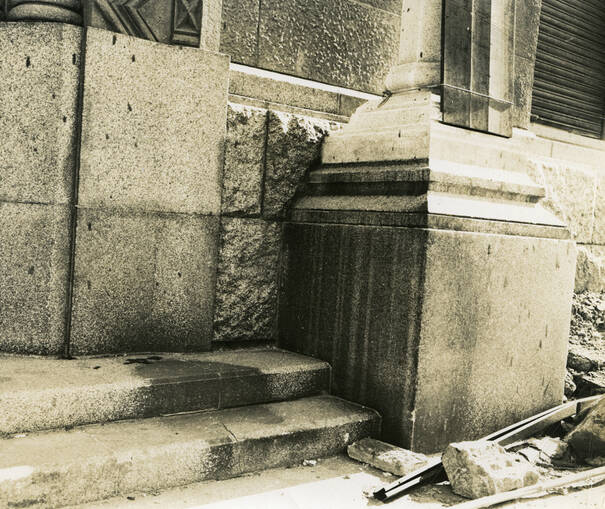 Wikimedia CommonsThe heat from the explosion burned the surface of the stone around the victim’s body.

Perhaps the most famous of the Hiroshima shadows is that of the person sitting on the bank steps. It is one of the most complete impressions left behind by the blast, and remained in place for over 20 years before it was removed and taken to the Hiroshima Peace Memorial Museum. Now, visitors can see the horrific Hiroshima shadows up close as the memorials to the horrors of nuclear weapons.

Depending on where these imprints were left, they have lasted anywhere between several to dozens of years before they were eventually eroded by rain and wind.

The Destruction In Hiroshima 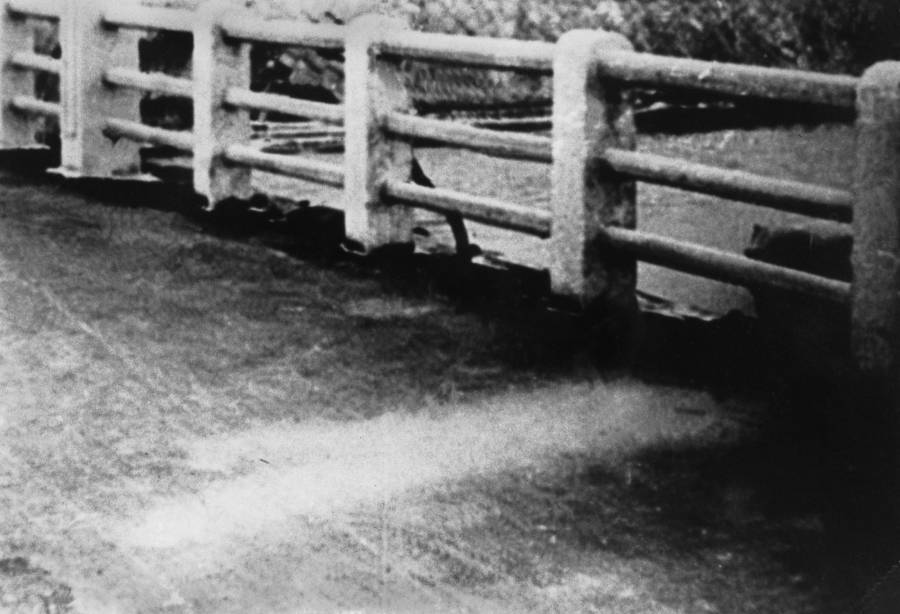 Keystone-France/Gamma-Keystone via Getty ImagesWhen the atomic bomb detonated over Hiroshima shadows formed as residents were vaporized where they stood and the nuclear blast bleached the materials around them. It appears that one person was protected by the body of another in their final seconds.

The aftermath in Hiroshima was unprecedented. One-quarter of the city’s population perished in the blast and a second quarter died in the months that followed. 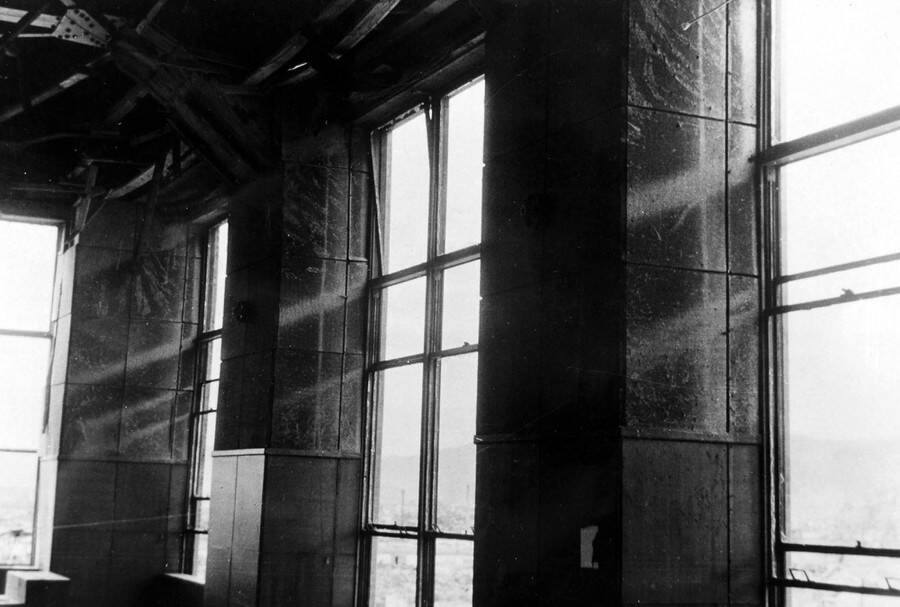 The city of Hiroshima estimated that upwards of 200,000 people were killed in connection with the bombing, and largely due to a deadly combination of radiation poisoning and a lack of medical resources because the bomb detonated directly over a city hospital, killing a huge portion of its local doctors and supplies.

The events in Hiroshima that August day changed the world. Ninety percent of the city of Hiroshima was flattened, 80,000 people and counting were dead, and within days the emperor of Japan announced an unconditional surrender. World War II came to a close and the whole of the globe was introduced to a terrifying new form of destruction.

After this look at the atomic bomb shadows left in Hiroshima, read about Tsutomu Yamaguchi, the man who survived both atomic bombs. Then, learn why the Nagasaki almost wasn’t bombed.