Archaeologists In Norway May Have Found The World’s Oldest Runestone

Experts say that the 2,000-year-old artifact is the oldest datable runestone in the world and may provide researchers with valuable knowledge about the early days of runic writing. 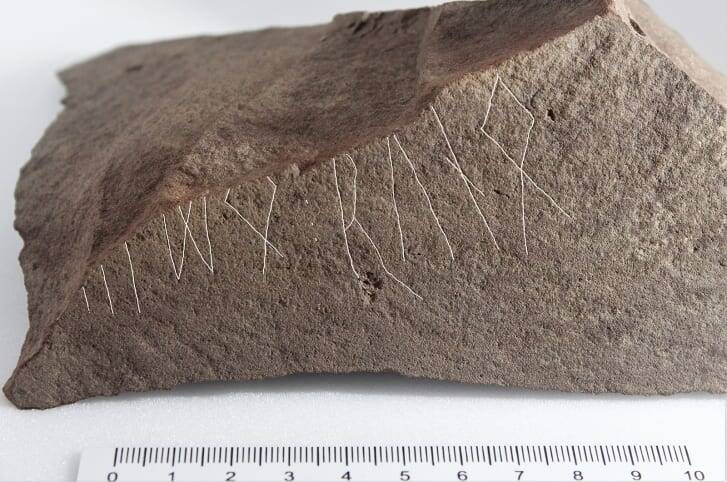 Runes, the characters that make up several early Germanic alphabets, were used in Northern Europe from the beginning of the Common Era until the adoption of the Latin alphabet at the end of the Viking Age. Researchers are still piecing together their mysteries to this day — but they may have come a little closer after the discovery of what might be the oldest runestone in the world.

According to the Museum of Cultural History in Oslo, archaeologists in Norway found a 2,000-year-old slab in late 2021 that’s believed to be the oldest datable runestone in the world.

As The Guardian reports, archaeologists uncovered the stone while excavating a gravesite in the town of Tyrifjord, Norway. It was found in the cremation pit among other items like charcoal and burned bones.

Radiocarbon dating of the bones and charcoal indicates that the runestone was likely inscribed sometime between 1 C.E. and 250 C.E., according to the museum.

Carved in flat, brown sandstone, the runestone dates back to the earliest days of runic writing. Scholars have dubbed it “Svingerudsteinen” or “Svingerud stone” after the location where it was found.

“This may be one of the first attempts to use runes in Norway and Scandinavia on stone,” explained Kristel Zilmer, Professor of Written Culture and Iconography at the University of Oslo. Zilmer has spent the past year extensively researching the runestone’s inscriptions.

The discovery of the stone, which Zilmer called “the most sensational thing” that she’s ever experienced as an academic, may provide historians and archaeologists alike with important information about the earliest use of runes in the region.

Experts have uncovered even older runes in the past, with the earliest example inscribed on a bone comb found in Denmark, but these are the oldest runes ever found carved into stone. Measuring 12.2 inches by 12.6 inches (31 centimeters by 32 centimeters), the runestone features multiple inscriptions. Eight runes on one side of the stone form the word “idiberug.” According to the museum, the word may refer to an individual or a family. It may even be the name of the person in whose grave the runestone was discovered.

“The text may refer to a woman called Idibera and the inscription could mean ‘For Idibera.’ Other possibilities are that idiberug is the rendering of a name such as Idibergu, or perhaps the kin name Idiberung. And there are other possible interpretations — as common with early runic inscriptions,” stated Zilmer.

Determining the true meaning of the inscription poses several challenges for researchers. There may have been multiple variations of runes, and the language changed over time. What’s more, the runes on the stone don’t all make sense linguistically.

Some of them form patterns across the rock, like zig-zags and grids. “Not all inscriptions have a linguistic meaning,” Zilmer said. “It’s possible that someone has imitated, explored or played with the writing. Maybe someone was learning how to carve runes.”

There is still plenty of research left to be done on the runestone, but experts are confident that it will illuminate valuable information about the early history of runic writing. Steinar Solheim, an archaeologist and excavation manager at the Museum of Cultural History, told CNN, “This [discovery] means that the runestone tradition is older, maybe even by a few hundred years, than we have previously assumed.”

He continued, “But this also makes us wonder what else we may not have known about regarding the use of runic writing in the early Iron Age Scandinavian society.”

After peeling back the mysteries behind Scandinavian runestones, go inside the discovery of ancient reindeer hunting tools in Norway. Then, read about other record-breaking archaeological finds around the world, including the oldest piece of cheese ever found.

Amber Breese
Amber Breese is an editing fellow for All That's Interesting. She graduated from the University of Florida with a degree in political science, history, and Russian. Previously, she worked as a content creator for America House Kyiv, a Ukrainian organization focused on inspiring and engaging youth through history and cultural exchanges.
You might also like
×
Follow hu On