Though no one is sure, Hog Island seems to have disappeared sometime during the 1920s. 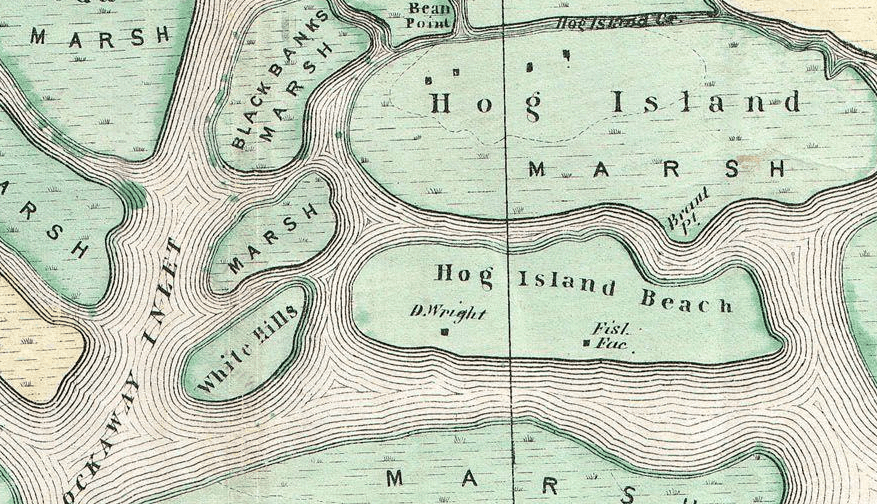 Hog Island’s origins are as mysterious as its demise. An 1895 New York Times article offered a creation story that sounds straight out of Greek mythology, claiming, “Hog Island rose from the ocean in a single night, thirty years ago.”

Although the landmass off the southern coast of Long Island certainly reached the height of its popularity in the years after the Civil War, chances are that it formed slowly over the years as the ocean current swept sand outwards from the coast rather than springing into being overnight.

The island got its name “on account of its resemblance to a hog’s back,” according to Albert Henry Bellot’s 1918 History of the Rockways that was written while the island was still a popular bathing spot. At some point in the 1870s, savvy entrepreneurs realized there was a wealth of beach real estate available on the island. They rushed to establish various “bath houses” that would soon be filled with New Yorkers seeking a quick escape from the city’s summer heat.

Beachgoers arrived on Hog Island via ferries run by bath houses. Once on the island, revelers could sit on the beach, enjoy a picnic, or choose from “two or three restaurants furnishing refreshments.” Visitors could also take advantage of the warm weather in one of the numerous pavilions and dance platforms erected all over the island. 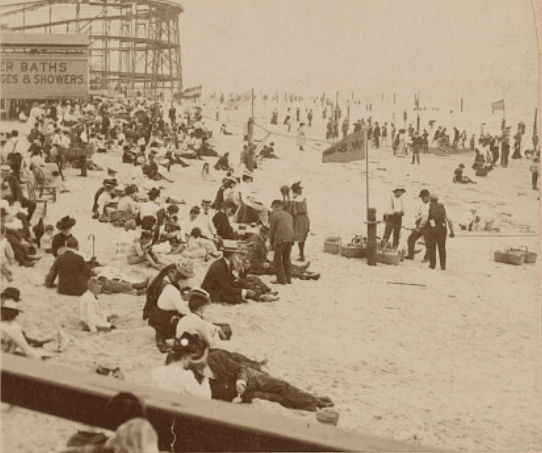 Library of CongressRevelers on Rockaway Beach in 1903.

One of these Hog Island restaurants was a favorite summer haunt of politicians from New York’s infamous Tammany Hall. Members of the powerful political machine would meet at the beach getaway and make some of the city’s most important political decisions there.

The same forces that created Hog Island also eventually ruined it. A devastating hurricane in the summer of 1893 wrecked the island’s outer beach, destroying “more than $19,000 worth of property” as reported in the New York Times. Many of the dance platforms and pavilions that had been the scene of festivities were lost beneath the waves as “Father Neptune… claimed his own again.”

Although the storm did serious damage, the island had slowly been losing coast for years, at one point shrinking by 500 feet in just a few months. Engineers were hired to see if they could construct a protective bulkhead to shield the buildings from future damage. But in 1898 proprietors realized the risk from the gradually rising tides was too great and decided to remove their property and “abandon the island entirely.”

The island’s buildings were eventually razed and the once-steady flow of beachgoers trickled to down nothing. There is no official record on when the island was finally submerged entirely, but it’s estimated to have happened sometime during the 1920s.

New Yorkers still have their choice of small islands where they can spend a day enjoying the sea breeze. Most are accessible by ferry, just as they were a century and a half ago. However, the “fare of five cents per passenger” has gone up a bit since then.

After learning about Hog Island, check out these incredible photos of Pig Beach, where pigs roam free. Then, see how Goqui Island has been reclaimed by nature in a stunning way.