Local legend has it that the last three rulers of the Incan Empire lay buried at the site. Shaped like a cross, the one-hectare complex has a rich and mysterious history. 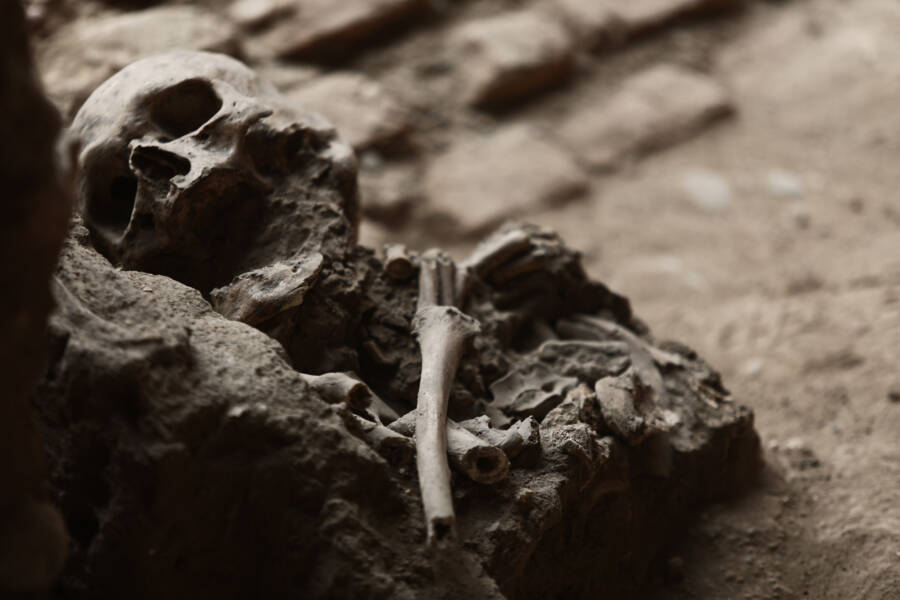 The Hospital Real de San Andrés in Lima, Peru, has long captivated historians. Built exclusively for Spanish patients in 1552, legend holds that it served as a tomb for the last three rulers of the Incan Empire. While those have yet to be found, archaeologists just unearthed the skeletons of 42 Spanish syphilis victims.

According to The Daily Mail, the bodies were found in the courtyard of the historic hospital building. While it was identified as a burial ground two decades ago and the remains were only buried 12 inches deep, only renewed archaeological digs beginning in 2021 led to their discovery — and an underground crypt nearby.

Hospital Real de San Andrés has been considered the oldest in Peru and perhaps even in all of South America. It trained the first doctors of the 1500s and provided room for the mentally ill and a church for those near death. Religion was a fundamental part of the site’s very design, which was built in the shape of a cross.

Researchers also found pre-Hispanic pottery and a cross around one of the victim’s necks, according to an Associated Press report. With 16th-century chroniclers describing the bodies of Incan rulers Pachacutec, Huayna Capac, and Tupac Yupanqui being buried in the crypt, however, that particular area remains most captivating of all.

Historical documents noted that the three mummies were transported from the Incan Empire’s capital of Cusco to the Lima in order for Viceroy Andrés Hurtado de Mendoza to bear witness. After observing the remains, Mendoza purportedly sent them to Hospital Real de San Andrés — before having them buried.

“Although it is not the initial objective of this project, we also do not deny the interest of being able to find the royal mummies during the excavation process,” said Walde. 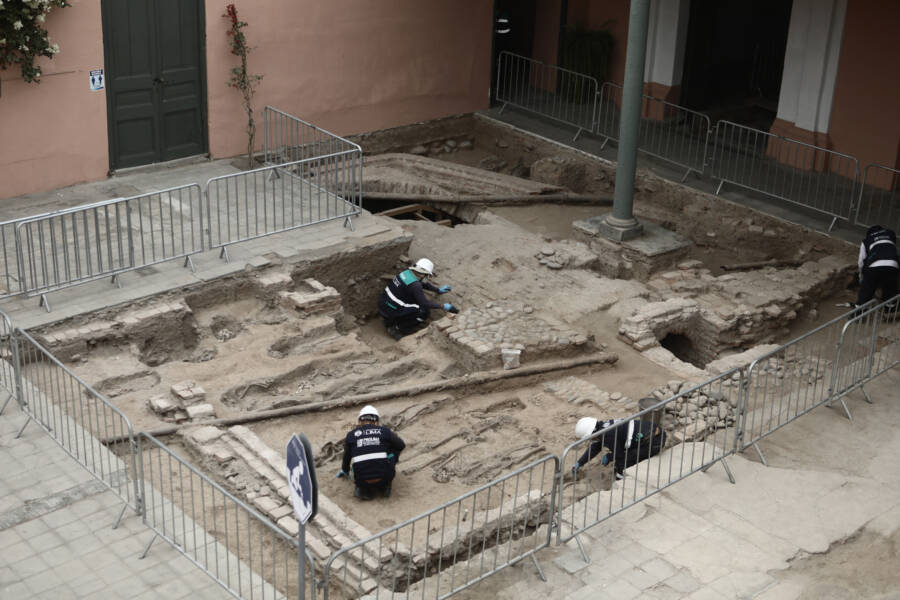 Klebher Vasquez/Anadolu Agency/Getty ImagesThe complex was designed in the shape of a cross.

After dominating the Incas and taking control of the city, Spanish conquistador Francisco Pizarro constructed a church to symbolize Lima’s founding on Jan. 18, 1535. This coincided with Catholicism’s Epiphany holiday celebrating Jesus being visited by the gift-bearing Three Kings — thus christening Lima the “City of Kings.”

Hospital Real de San Andrés was founded only 17 years later. Francisco de Molina had cared for the poor at his own home during the 1530s and 1540s and now had a formal place to do so. The hospital was ultimately named after Spanish Viceroy Andres Hurtado de Wildoso, however.

The hospital was comprised of three sections: one central area, a church, and a series of medical wards. It was adjoined by offices, a pharmacy, a garden, and the cemetery in question — and held an altar at the center of its cross-shaped design. Many of the unearthed victims bore deformities in the skull. 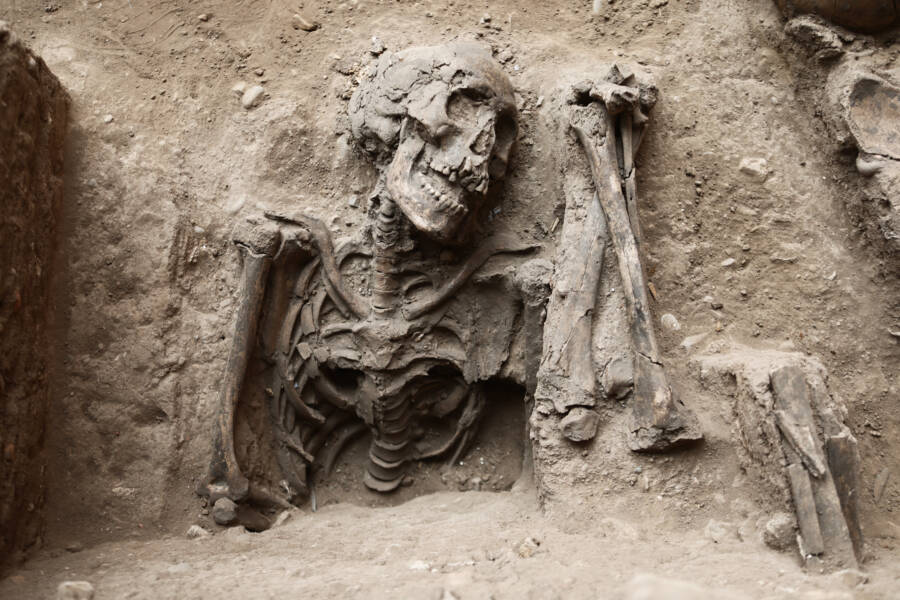 “The people who did not survive the treatment were buried here,” said Héctor Walde, chief archaeologist for the Lima municipality. “The ritual and religiosity in Lima was very strong.”

The one-hectare complex became a hospice for orphans by the 1870s, and ceased serving as both hospital and cemetery. It later became a public school with the playground ominously built directly above the former burial ground, and after a major earthquake in 2007, it was abandoned.

Researchers only uncovered their first traces of the cemetery when excavations began in the early 2000s. They also found a damaged 19th-century fountain and a trash pit from colonial times, as well as a vaulted structure beneath the surface. Unsuspecting shopkeepers on the busy street were awestruck.

“On the whole block there are a lot of businesses,” said Eulalia Sánchez, a local vendor. “I didn’t know there was a cemetery inside.” 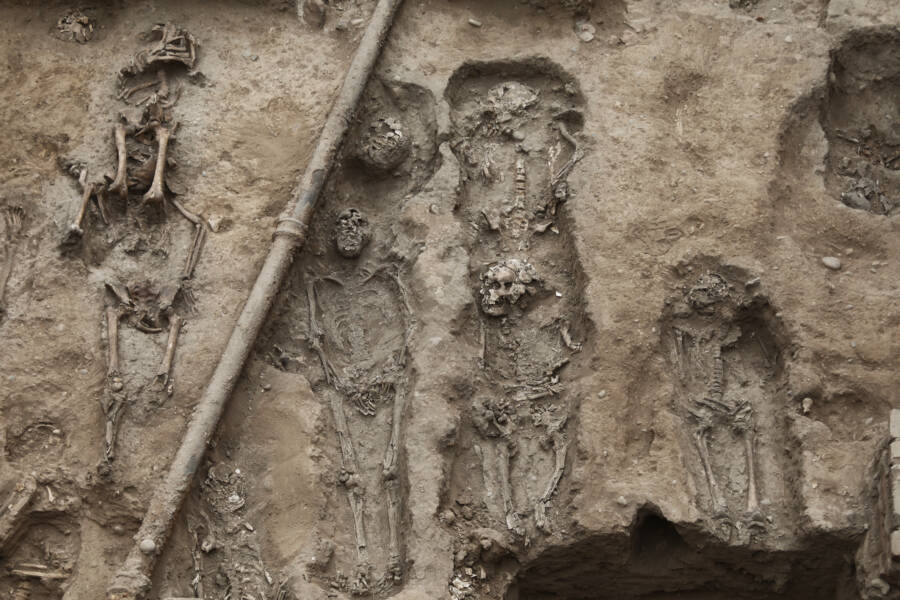 Ultimately, the fact that this expansive complex was discovered at all remains a marvel. Over the last 100 years, countless modern facilities were built atop — from police stations and Chinese restaurants to a variety of businesses and family apartment buildings.

Whether the mummified remains of the last three rulers of the Incan Empire will be unearthed from the site remains to be seen.

After reading about the Hospital Real de San Andrés, learn about the single largest mass child sacrifice site in the world. Then, read about the mass grave of Nazi paratroopers uncovered in Poland.