How Did Julius Caesar Die? Inside The Notorious Death Of The Roman Dictator

Julius Caesar was fatally stabbed by the Roman Senate on the Ides of March of 44 B.C.E., triggering the downfall of the Roman Republic. 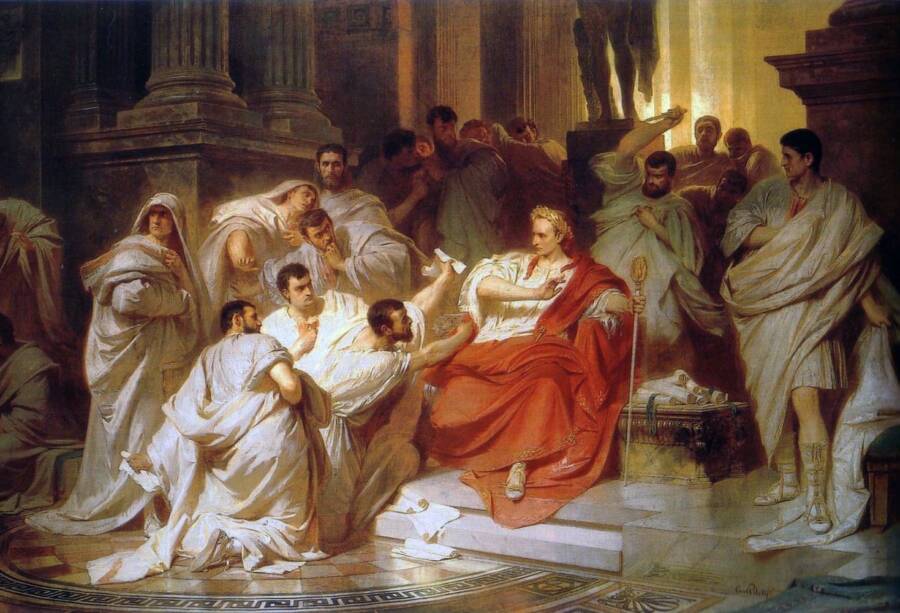 Wikimedia CommonsA depiction of how Julius Caesar died at the hands of his own senators.

Julius Caesar’s assassination on March 15, 44 B.C.E. marked the end of an era. The beloved military general had expanded the republic across Europe, chronicled his travels for the masses, and won the hearts of both the army and Roman civilians. After Caesar crowned himself “dictator in perpetuity,” however, his fellow politicians grew lethally concerned.

Caesar had risen to power after decades of political gridlock and civil wars hampered the Roman Republic. After ruling with an increasingly autocratic fist, however, fellow politicians grew lethally concerned.

According to HISTORY, Caesar began cherrypicking election results, putting his face on newly-minted coins, and doling out public lands to soldiers to curry the army’s favor. He further threatened Rome’s democratic institutions by taking full control of the treasury and bypassing the Senate — sending shudders through the corridors of power.

So how did Julius Caesar die? On that fateful Ides of March, Caesar arrived at the Senate for a seemingly standard session when dozens of senators surrounded him. Lucius Tillius Cimber tore the dictator’s toga off before a group of 60 people stabbed Caesar 23 times.

While the self-proclaimed “Liberators” believed they had rescued the Roman Republic, Julius Caesar’s death merely made way for his great-nephew and adopted heir Octavian to reign — and rule as the first emperor of the Roman Empire.

Gaius Julius Caesar was born on either July 12 or 13 in 100 B.C.E., in Rome, Italy, according to Encyclopedia Britannica. His uncle was a renowned general named Gaius Marius, but Caesar’s family wasn’t particularly rich or well known. He studiously traced his lineage, however, and believed he was a descendant of the goddess Venus and the Trojan prince Aeneas. 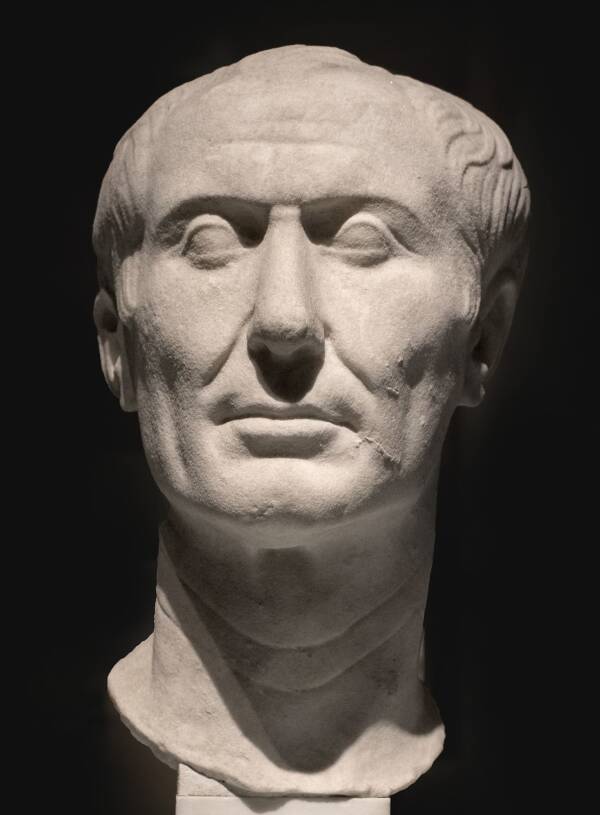 Wikimedia CommonsJulius Caesar died at the age of 55.

Caesar became the man of the house when his father died in 85 B.C.E. Since his uncle Marius was embattled in a civil war with Roman ruler Lucius Cornelius Sulla, Caesar married Cornelia, the daughter of one of Marius’ allies. When Sulla won the war in 82 B.C.E., however, he ordered Caesar to divorce Cornelia.

When he refused, Caesar had his inheritance and his role as high priest of Jupiter stripped from him and went into hiding. He ultimately left Rome to join the army and earned numerous accolades, awards, and medals during his service. When Sulla died in 78 B.C.E., Caesar returned to Rome and became a prosecutor, military tribune, and quaestor, or public official.

Roman citizens cherished Caesar for chronicling his campaigns across Gaul, Britain, Egypt, and Africa. After a quick rise through various public offices, he was elected consul in 59 B.C.E. And within 15 years, he’d been appointed dictator of Rome.

According to World History Encyclopedia, Caesar solidified his status among the Roman population with numerous reforms. He offered land to retiring soldiers, gave grain to the poor, standardized gladiatorial games, and reduced crime by creating jobs through public works projects. For his fellow politicians, however, the increasing galvanization of both army and citizens alike was terrifying — and they began plotting Julius Caesar’s death.

How Did Julius Caesar Die?

While senators were frustrated that their political voices were being cast aside, Caesar reigned under a self-imposed 10-year term limit. In February 44 B.C.E., however, he subverted the constitution and crowned himself dictator perpetuo — extending that power in perpetuity. His daily behavior only made matters worse. 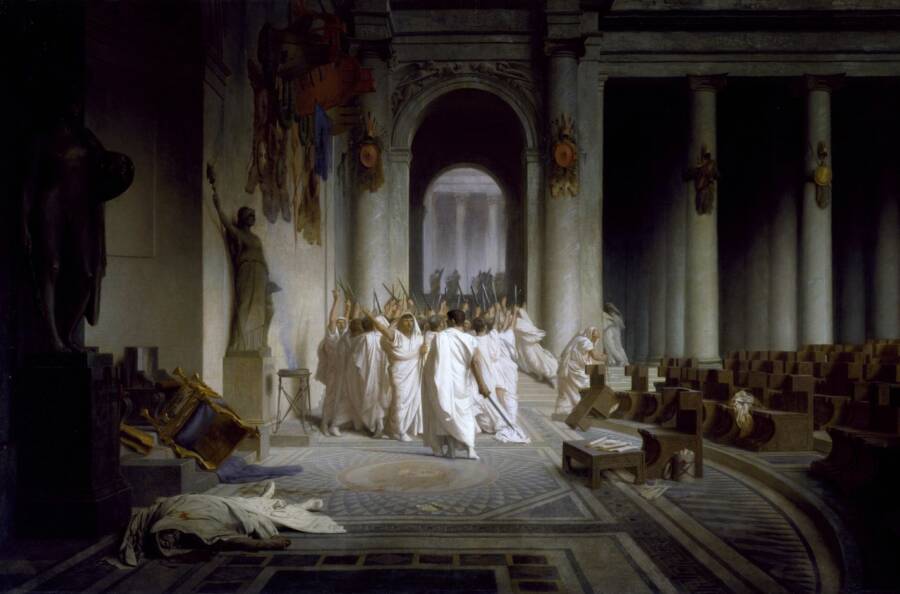 Wikimedia CommonsAncient historians like Plutarch and Suetonius carefully documented how and why Julius Caesar was assassinated.

Caesar began wearing the regalia of ancient kings, sitting in a custom gold chair during Senate sessions, and wearing a wreath of laurel on his head.

So why was Julius Caesar assassinated? Politicians feared the 55-year-old was behaving more like a king than a public servant, particularly when he failed to rise for colleagues or left senators out entirely while making unorthodox decrees. A group of senators who called themselves “Liberators” arose as a result — and began positing shadow resolutions.

Brutus successfully argued there was enough support among Romans to kill Caesar without the Liberators being branded as traitors. They hurriedly debated whether to kill him at home or in a public place, but they knew it had to be done quickly before Caesar left for a military campaign on March 18.

The assassins ultimately settled on the March 15 Senate session at the Theatre of Pompey, the temporary meeting place for senators while the Roman Forum was undergoing renovations. There, they could take Caesar down without interference from his friends, as only senators were allowed into the building. The senators carried small daggers known as pugiones, as they were more easily hidden beneath their togas than swords. 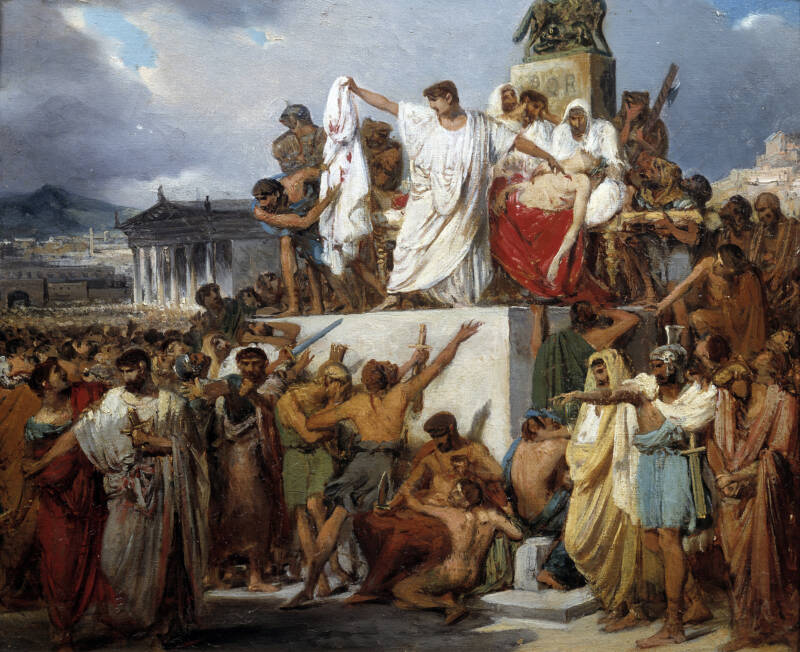 Leemage/Corbis/Getty ImagesRomans wept and raged at the news of Julius Caesar’s death.

According to the Greek philosopher Plutarch’s record of Julius Caesar’s assassination, when the dictator arrived in the theatre, Cimber approached with a petition to free his exiled brother, and the other senators gathered closely around, seemingly to offer their support. When Caesar waved him away, Cimber grabbed the dictator’s shoulders and ripped off his robe.

Caesar shouted, “Why, this is violence!” Then, Casca stabbed Caesar in the shoulder, and Caesar grabbed the weapon and cried out, “Casca, you villian, what are you doing?”

The senators then descended, stabbing Caesar 22 more times. Plutarch claimed there was such chaos that some of the conspirators cut each other in the confusion. Caesar reportedly first tried to find a way out, but when he spotted Brutus, whom he’d thought he could trust, he gave up and let the men kill him.

In William Shakespeare’s play Julius Caesar, the dictator famously says, “Et tu, Brute?” (“And you, Brutus?”) when he spies Brutus with a dagger. But there’s no evidence that Caesar ever actually uttered these words.

Instead, he likely died silently, quickly bleeding out on the floor of the Theatre of Pompey.

Julius Caesar collapsed at the foot of a statue honoring Pompey, who had once been his dear friend before becoming his enemy. Brutus had prepared a speech for the occasion and expected Roman citizens outside the theatre to welcome the news joyously. Instead, they were stunned. “Why was Julius Caesar assassinated?” they wondered.

The announcement spurred outrage and revolt, and civil wars followed. A crowd even burned the Senate House out of anger over how Julius Caesar died. Everyday Romans cared little about the traditions of the Roman Senate, after all, and they had largely benefitted from their slain leader’s reforms for the past several years.

Caesar’s friend and deputy Mark Antony initially tried to take control, but Caesar had named his 18-year-old great-nephew Caesar Augustus as his heir. Also known as Octavian, the young man amassed a private army and won control over numerous legions to solidify that claim. Many of the assassins were involved in the civil war that followed and met horrible deaths. 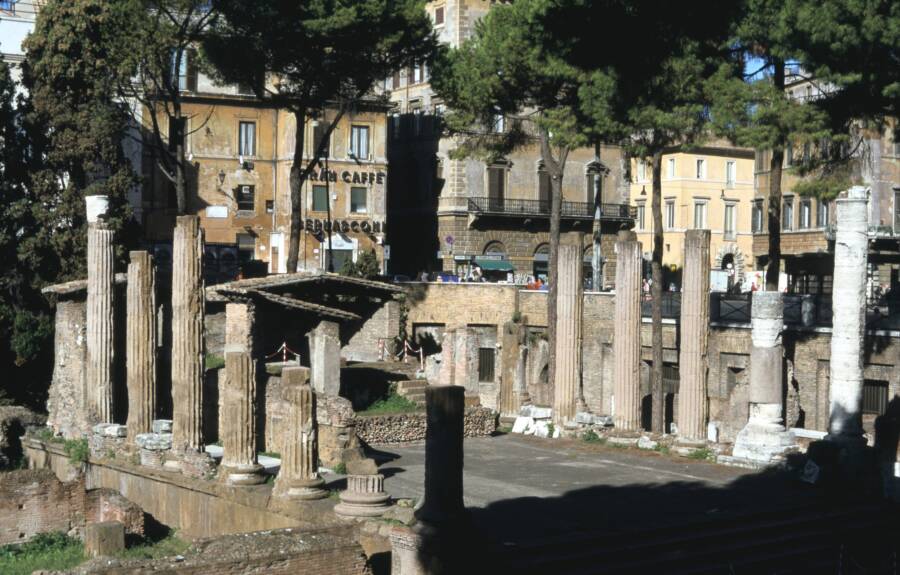 Universal History Archive/Getty ImagesThe ruins of the Theatre of Pompey, the location of Julius Caesar’s assassination.

“All were condemned to death… and all met it in different ways — some in shipwreck, some in battle, some using the very daggers with which they had treacherously murdered Caesar to take their own lives,” wrote Roman author Gaius Suetonius Tranquillus in The Lives of the Twelve Caesars.

After Julius Caesar’s death, Romans wept as slaves carried his body to his home. His funeral on March 20 was attended en masse, and his cremated remains were buried in his family tomb.

Perhaps most fascinating is that Suetonius believed Caesar knew of the assassination. According to his record, a soothsayer named Spurinna had previously warned Caesar of a great danger that would occur by the Ides of March. As Caesar entered the Senate that fateful day, he supposedly said to Spurinna, “You realize the Ides have come?” The soothsayer replied, “You realize they have not yet gone?”

Over the centuries, the story of the assassination of Julius Caesar has become almost legendary. It happened so long ago that it can be hard to separate fact from myth, but thanks to the historians who documented such a major event in Roman history, we can continue to study how Julius Caesar died. Even the Theatre of Pompey, where the great Roman leader took his last breath, can still be seen — as part of a cat sanctuary.

After learning why Julius Caesar was assassinated, read about Caesar and Cleopatra’s love child, Caesarion. Then, learn about the sadistic Roman emperor Caligula.