A co-king by age three, Caesarion's solo reign over Egypt lasted mere days before his adoptive brother had him killed. 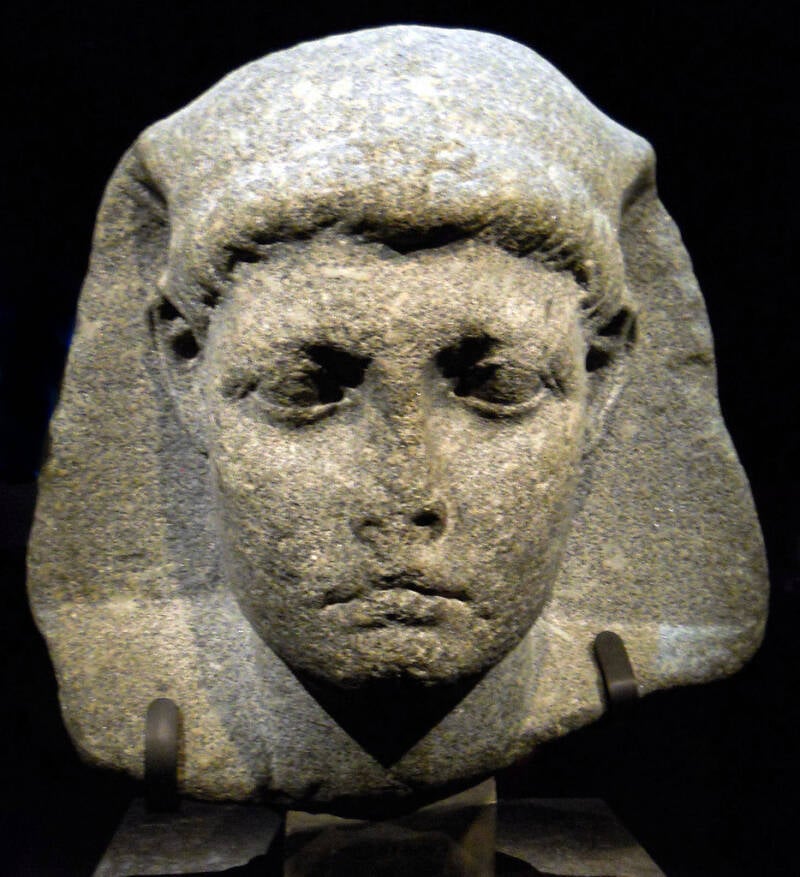 For centuries, power passed from father to son, mother to daughter, in royal dynasties. Cleopatra VII, the last pharaoh of Egypt, intended to continue that practice.

She took Roman general Julius Caesar as her lover, giving birth to their son, Caesarion, in 47 B.C. Cleopatra named Caesarion her co-ruler and intended for him to succeed her, but the might — and ego — of Caesarion’s adoptive brother, Octavian, brought that to a brutal end.

In the late 50s and into the 40s B.C., Cleopatra competed with her siblings – two brothers, both named Ptolemy, and her sister, Arsinoe – to rule Egypt.

After 18-year-old Cleopatra married her 10-year-old brother and co-ruler, Ptolemy XIII, in 51 B.C., civil war broke out between the pair. Cleopatra fled to Syria to marshal her own forces.

She came back better than ever. After sneaking into family friend Julius Caesar’s chambers wrapped in a rug (or, according to other translations of Plutarch, a sack of clothes), she charmed him, enlisted his help, and defeated her brother in battle.

Returned to her throne with Caesar’s help, Cleopatra nominally married her remaining brother, Ptolemy XIV, while continuing an affair with the Roman ruler. 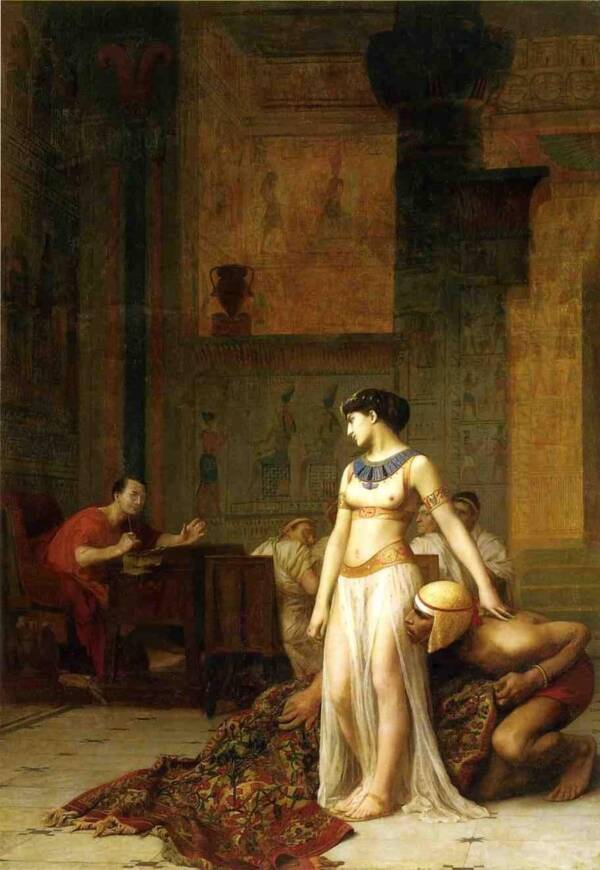 On June 23, 47 B.C., the queen of Egypt gave birth to a son. As Pulitzer Prize-winning historian Stacey Schiff wrote in her biography, Cleopatra: A Life,

“With Caesarion — or little Caesar, as the Alexandrians nicknamed Ptolemy XV Caesar — on her lap, Cleopatra had no difficulty ruling as a female king. Even before he began to babble, Caesarion accomplished a masterly feat. He rendered his feckless uncle wholly irrelevant. Whether Ptolemy XIV realized it or not, his older sister had gained control both of the imagery and the government.”

The Little Prince Of Egypt 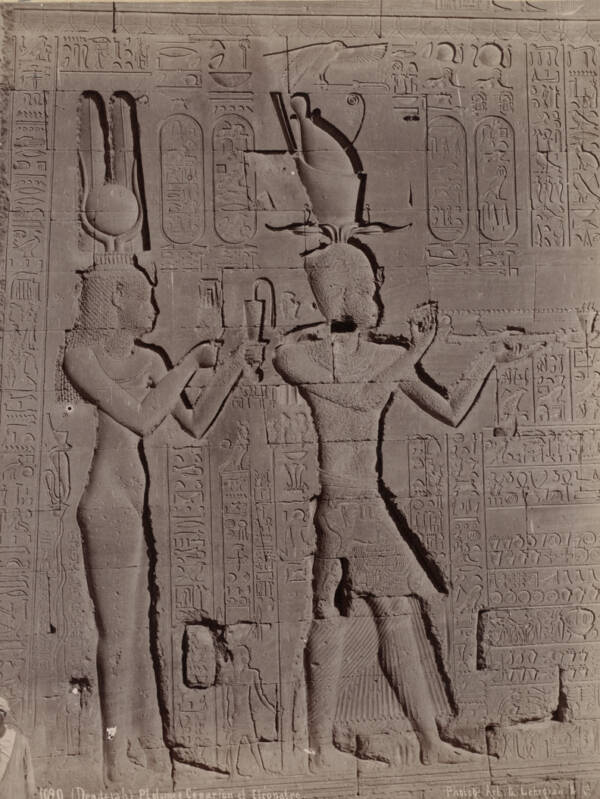 Ever-savvy Cleopatra laid claim to her son’s dual heritage. He bore the sobriquet “Ptolemy,” borne by all princes of the Ptolemaic dynasty, but he was most commonly referred to as “Caesarion,” or little Caesar.

Many didn’t believe the little royal was actually Caesar’s child. Cassius Dio, who lived in the 2nd and 3rd centuries A.D., sneered, “Cleopatra…on account of the aid she had sent to [Caesar’s ally] Dolabella, was granted the right to have her son called king of Egypt; this son, whom she named Ptolemy, she pretended was her son by Caesar, and she was therefore wont to call him Caesarion.”

Caesarion bore two other names, as attested by contemporary inscriptions: called a god, he was dubbed “Philometor” and “Philopator,” meaning “mother-loving” or “father-loving.” Both were both traditional nicknames for a Ptolemaic king or queen.

So from birth, little Caesarion carried two heavy weights on his shoulders: he was allegedly the only biological son of the most powerful man in Rome, as well as the heir to a 300-year-old kingdom and 3,000-year-old civilization that served as the breadbasket of the Mediterranean.

In 44 B.C., at just three years old, Caesarion was declared Ptolemy XV, a co-king alongside his mother. 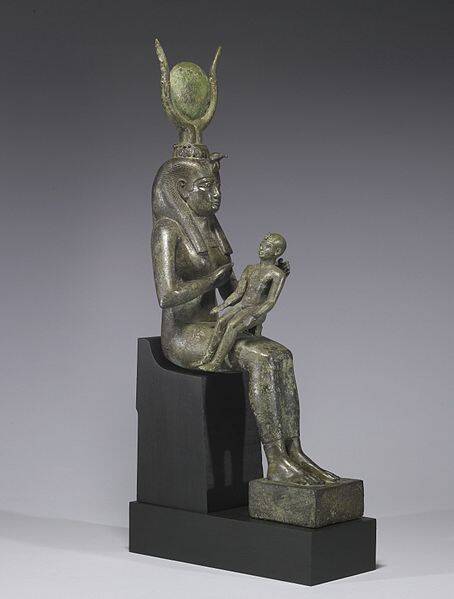 Wikimedia CommonsThe Egyptian goddess Isis holds her son, Horus, in her lap. Cleopatra commissioned coins and temple artwork depicting her and her own son as these deities.

In 46 B.C., Caesar was on top of the world, celebrating military victories left and right and rebuilding Rome. Cleopatra, after giving birth, trekked to Rome to visit Caesar — and introduce him to his son.

At the same time, she had new coins issued depicting herself as Venus (who also Caesar’s goddess ancestress) as well as the Egyptian mother goddess Isis. And who played the divine progeny Cupid-cum-Horus, king of Egypt? Caesarion, of course. Cleopatra portrayed herself and Caesarion as mother goddess and divine heir in temples throughout Egypt.

But what about her son? Poor Caesarion did not develop much of a relationship with his father, though there is some evidence that Caesar acknowledged him as his own flesh and blood. And less than three years after Caesarion’s birth, Caesar was dead, murdered by friends and foes alike.

But Caesarion was not Caesar’s official heir. According to Caesar’s will, that was his biological great-nephew and adopted son, Gaius Octavius, also known as Octavian, and later known as Augustus Caesar.

While the rest of Rome was trying to put one foot in front of the other after Caesar’s death, Octavian was systematically figuring out who was a threat to his inheritance. He immediately butted heads with Caesar’s lieutenant and frenemy Marc Antony; allies and then enemies, they only ended their conflict after a civil war years later.

Octavian, Antony, and Lepidus soon divided Roman territories between them.

Antony went to Egypt and then took up with Cleopatra, who gave birth to three of their children. Octavian spread the rumor that Antony intended to divide the eastern portion of Rome and disperse it amongst his kids with Cleopatra — and Caesarion, whom Antony dubbed Caesar’s legitimate heir. 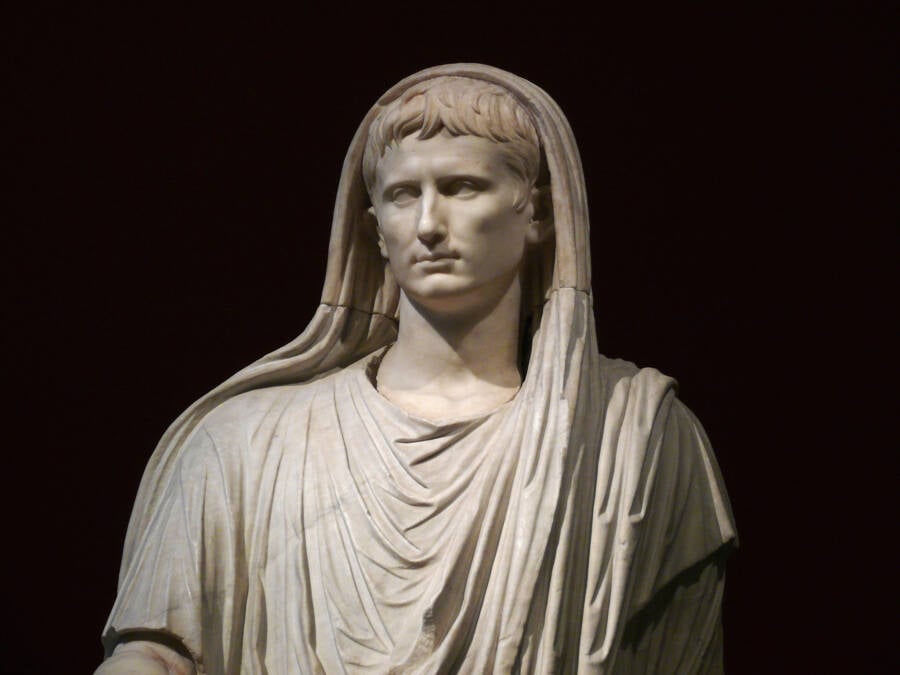 david_jones/FlickrOctavian had Caesarion killed so he’d have no competition for Rome’s throne.

The final blow came in a ceremony called the “Donations of Alexandria.”

Antony came home to Alexandria and declared Cleopatra and himself heirs to the Persian and Hellenistic monarchies. He also dubbed Caesarion Caesar’s true heir — in direct defiance of Octavian’s claims — and nominally distributed kingdoms to his three kids with Cleopatra.

So it was Octavian versus Antony and Cleopatra (and Caesarion) for control of Rome.

Octavian took nominal control over Cleopatra’s children and heirs. Caesarion attempted to flee to safety, perhaps to India by way of Ethiopia, but Octavian refused to let the last rival to Caesar’s throne survive. After Octavian offered Caesarion the crown of Egypt, Caesarion turned back from his travels on the advice of his tutor Rhodon — who was perhaps bribed by Octavian — and was killed.

Octavian or someone close to Caesarion supposedly quipped, “Too many Caesars is not a good thing.” With Caesarion, then, died Cleopatra’s hopes for an independent Egypt.

Octavian declared Egypt a province of Rome, and Caesarion became a forgotten footnote in the annals of ancient history.

After reading about the brief and tragic life of Caesarion, read how archaeologists are zeroing in on the location of Mark Antony’s and Cleopatra’s tomb. Then, discover the real reason why so many ancient Egyptian statues have broken noses.