Could The Tomb Of Antony And Cleopatra Soon Be Uncovered?

Since their joint suicide in 30 B.C., Antony and Cleopatra's tomb has remained hidden somewhere in Egypt — but researchers may now be closing in on where the storied queen is buried. 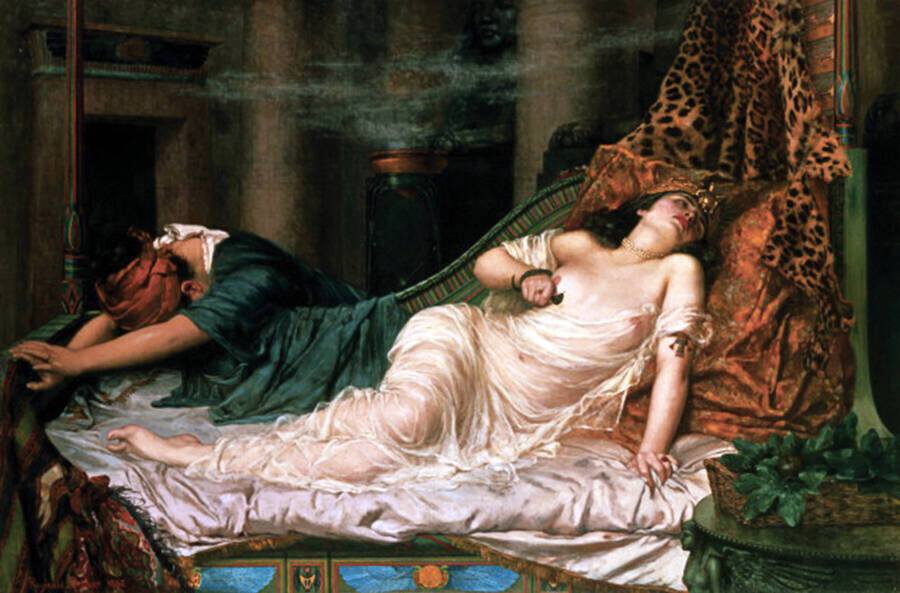 Wikimedia CommonsThe tomb of Antony and Cleopatra has mystified archaeologists and history-buffs alike for millennia.

It was January 2019 and the world was abuzz with whispers that the long-lost tomb of Cleopatra VII and Mark Antony — arguably history’s most famous lovers — was about to be unearthed. “Tomb of Antony and Cleopatra to be uncovered soon” proclaimed outlets in the Egyptian media. Western media outlets, too, broadcast headlines like “Antony and Cleopatra’s long lost tomb ‘FOUND and is set to be uncovered.'”

According to the rumors, a team lead by esteemed Egyptian archeologist Zahi Hawass was closing in on the site of where the queen of Egypt and the Roman general had been buried.

To the world’s disappointment, however, these allegations proved to be (mostly) false. Hawass and his team debunked the myth in an interview with Live Science, saying that the stories were “completely false; [there is] nothing found at all about the tomb.”

But, as with many rumors, these claims must have sprung from some kernel of truth. In a press conference earlier that month, Hawass had indeed noted that the tomb could one day be discovered in the ancient city of Taposiris Magna, where catacombs and other Egyptian artifacts relating to Cleopatra had previously been found.

This excavation is currently under the direction of amateur archaeologist Kathleen Martinez. “We are on the right [track],” concedes Hawass in regards to these efforts.

And so the generations-long search for elusive tomb continues.

The Love Affair Of Antony And Cleopatra 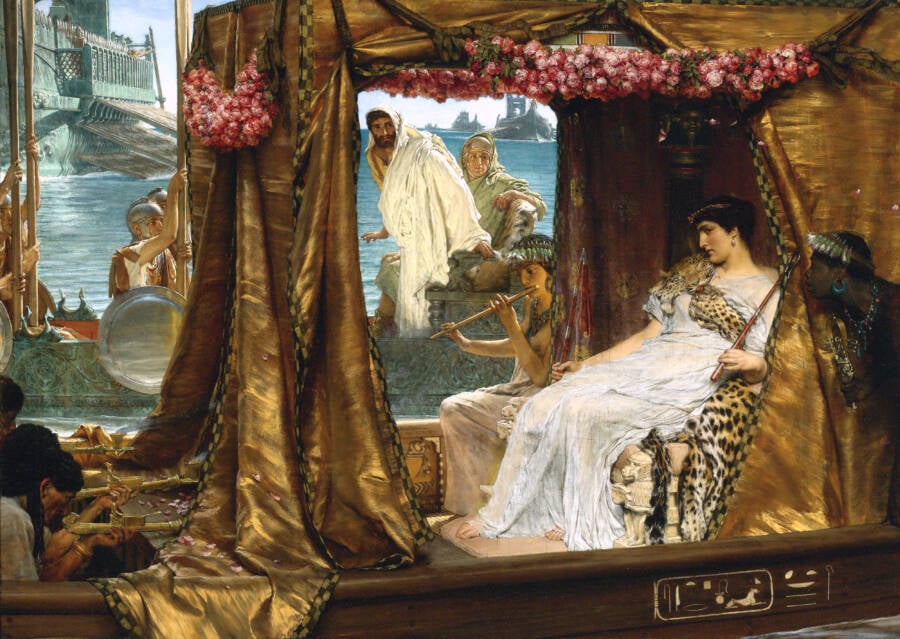 Wikimedia CommonsA depiction of Antony and Cleopatra meeting for the first time.

The tomb of Mark Antony and Cleopatra has fascinated archaeologists and historians for generations because of the tale of the couple’s colorful history and ill-fated demise.

The last pharaoh of ancient Egypt, Cleopatra, ruled from 51 B.C. to 30 B.C. Renowned both for her remarkable beauty and intelligence, Cleopatra was described by the Greek historian Plutarch as “the sort that would astound those who saw her; interaction with her was captivating…her tongue was like a many-stringed instrument.”

Cleopatra famously had a love affair with Julius Caesar, who gave her a son named Cesarion or “Little Caesar.” After Caesar’s assassination in 44 B.C., the powerful Roman politician and general Mark Antony, Caesar’s co-counsel, formed a political triumvirate with Caesar’s great-nephew and chosen heir, Octavian, as well as the Roman statesman Marcus Aemilius Lepidus.

Cleopatra met with Antony to solidify a political alliance, but the two also fell wildly in love. Antony was already married to Octavian’s sister when they met, and his divorce of her for Cleopatra left Octavian simmering. Nonetheless, Cleopatra and Antony flaunted their decadent love affair for 10 years and had three children together.

However, their political coalition quickly began to deteriorate under the stress of ego, ambition, and propaganda.

Octavian declared war against Antony and Cleopatra in 31 B.C. Antony’s navy was destroyed in the Battle of Actium, and the lovers made a desperate escape to Egypt with Octavian on their heels. As Octavian’s forces invaded Alexandria, Antony and Cleopatra both resolved to kill themselves.

After getting false word that his lover was already dead, Antony stabbed himself with a sword. Upon discovering Cleopatra was still alive, Antony asked to be brought to her to die in her arms. Once he died, Cleopatra managed to commit suicide through poison — allegedly through the forced bite of a poisonous snake — to join her lover in escaping humiliation and captivity.

But, as legend has it, the two were not able to be separated, even in death. According to ancient historians Suetonius and Plutarch, the duo was buried side-by-side in a tomb. As Plutarch wrote, Octavian commanded that Cleopatra’s “body should be buried with that of Antony in a splendid and regal fashion.”

Despite strong evidence of the tomb’s existence, its location has remained lost to history.

The Search for The Illusive Tomb Of Cleopatra 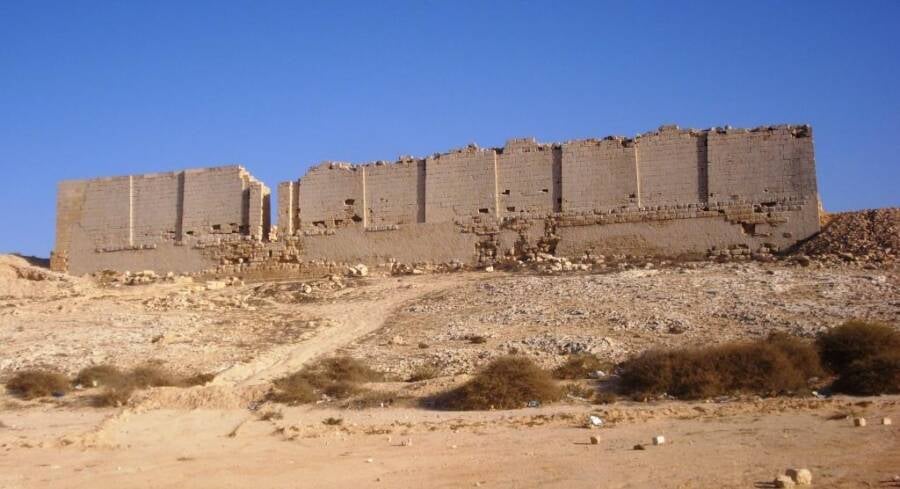 Wikimedia CommonsNorth view of the ruins of Taposiris Magna.

Archeologists, historians, and fans of one of the world’s first celebrity couples have puzzled over the location of the tomb for centuries. It was only over the past few decades that archaeologists began to hunt for it in earnest. But the feat hasn’t been easy.

“You cannot find anything in any ancient writing about where Cleopatra is buried,” noted Martinez.

For many years, the tomb was thought to be somewhere in Alexandria, the city where Cleopatra once lived. Alexandria has since been ravaged by earthquakes, tidal waves, rising seas, and now lies 20 feet underwater.

In 1992, French explorer Franck Goddio lead the European Institute of Underwater Archaeology in underwater excavations of ancient Alexandria. Their efforts have uncovered grand stone sphinxes, massive limestone blocks, towering granite columns, and even an empty cigarette pack with Cleopatra’s name — but no tomb.

Following the underwater attempt, archeologists turned their attention to a desert temple just outside of Alexandria. The theory is that as a prestigious Pharoah, Cleopatra may have wanted a tomb in a more sacred location than downtown Alexandria. To date, there has been minimal evidence uncovered that the tomb may be hidden in the sacred temple.

In 2006, yet another search was launched in a decrepit temple 28 miles west of Alexandria. The ruined temple lies near the ancient city of Taposiris Magna (present-day Abu Sir), which is sandwiched between the Mediterranean and Lake Mareotis. In ancient times, Taposiris was a prominent port town renowned for its vineyards. 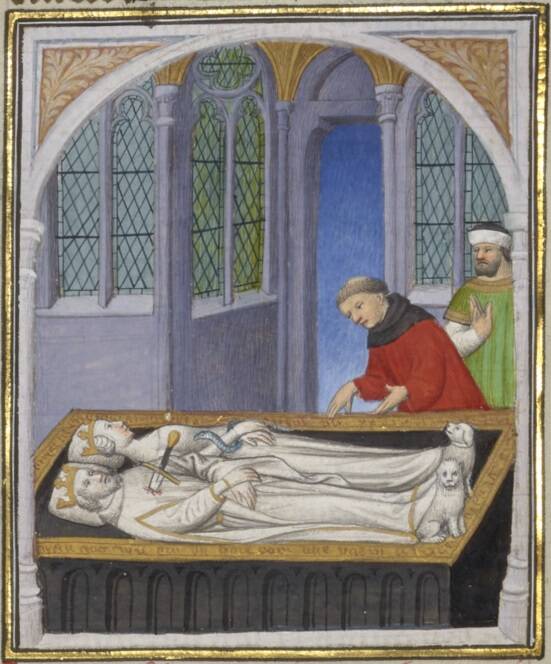 Wikimedia CommonsGiovanni Boccaccio’s 1409 illustration of Mark Antony and Cleopatra in their tomb, with an asp slithering near her chest and a bloody sword impaling his.

Under the leadership of the tenacious Kathleen Martinez, archeologists have uncovered more than 1,000 ancient artifacts, including pottery, coins, broken statues, and a large cemetery. Today, the Taposiris Magna is one of Egypt’s most active archaeology projects. But despite all the treasures that have been discovered, the tomb of Cleopatra and Antony has stayed a secret.

If the tomb is uncovered, the discovery will be matched in prestige only by the excavation of King Tut in 1922.

Until then? Archeologists will keep on digging.

After this look at the search for the tomb of Antony and Cleopatra VII, check out these sunken cities like Cleopatra’s kingdom of Alexandria. Then, read up on Crixus, Spartacus’ right-hand man and potential downfall.