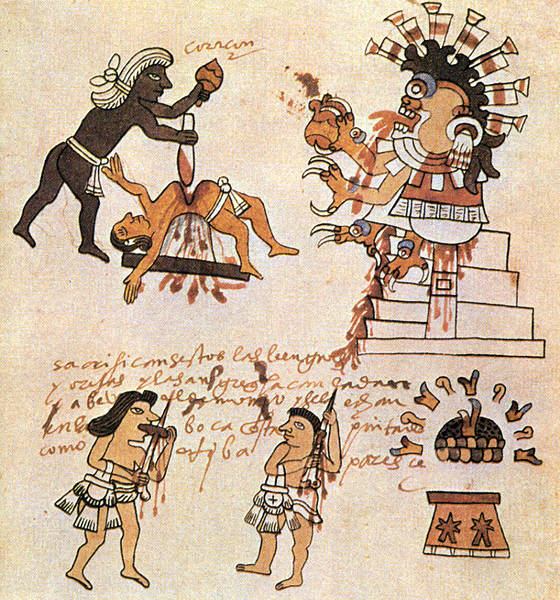 For the Aztecs, even the sun god required a constant flow of human blood in order to exist.

Sacrifices for the Aztecs were detailed rituals but perhaps what makes them truly stand out is the scale in which they were conducted. During the reign of their empire, it’s estimated that an average of 200,000 people were sacrificed a year. Many rituals surrounded the theme of mass sacrifice, such as the inauguration of their greatest pyramid, which is said to have claimed the lives of 84,000 over a period of only four days.

Wars were even waged solely to gain more prisoners for these gruesome rituals. Deals between city-states were made in which two armies organized staged battles. It was a mutual agreement between both sides that for the greater good of their people, the losers must be led to their deaths.

Another common sacrificial technique included pulling a still beating heart out of a victim’s chest and showing it to them in their last moments of consciousness, an act that took a surprising amount of anatomical knowledge and surgical skill but has since been proven possible by modern scientists.

Gladiatorial competitions were also used to ensure a suitable quantity of human sacrifice. These brutal matches were in no way equal, with heaps of skilled and armored warriors being pitted against perhaps one or two common men wielding nothing more than a club. Again, these gladiators perceived their way of death as the highest honor.

One notable ritual in which the sacrifices did not go willingly was that involving the god of rain and lightning, Tlaloc. This god demanded children and their tears. The Aztecs would bring large groups of children to Tlaloc’s temple, where they were forced to solemnly and ceremonially parade up the steps. If the children did not weep, they would be forced to do so by any means of psychological and physical torture necessary. To the Aztecs, the tears shed by these children on the way to their untimely deaths was the only way to ensure rain during the oncoming dry seasons.

Other rituals included cannibalism, the live flaying of men, wearing of human skins, and other techniques of drawn-out dismemberment and bloodletting including the mass collection of skulls. The Aztecs would often invite their enemies or neighbors to witness these bloody rituals, causing a crippling fear in nearly everyone who came across them. The first Spanish conquistadors to stumble upon them described giant pyramids with a never-ending flow of human blood running down them.

It has even been speculated that the reason that the Aztecs survived longer than any of the others was the amount of fear they evoked in colonists. It wasn’t until Europeans claimed more Aztec victims (via the introduction of diseases like smallpox) than these sacrificial rights did, that invasion was even attempted.