Meet The Huntsman Spider, The Terrifying Arachnid That Doesn’t Need Webs To Kill

Sometimes called a "giant crab spider," the huntsman spider is famous for its terrifying size — which can reach up to 12 inches in leg span. 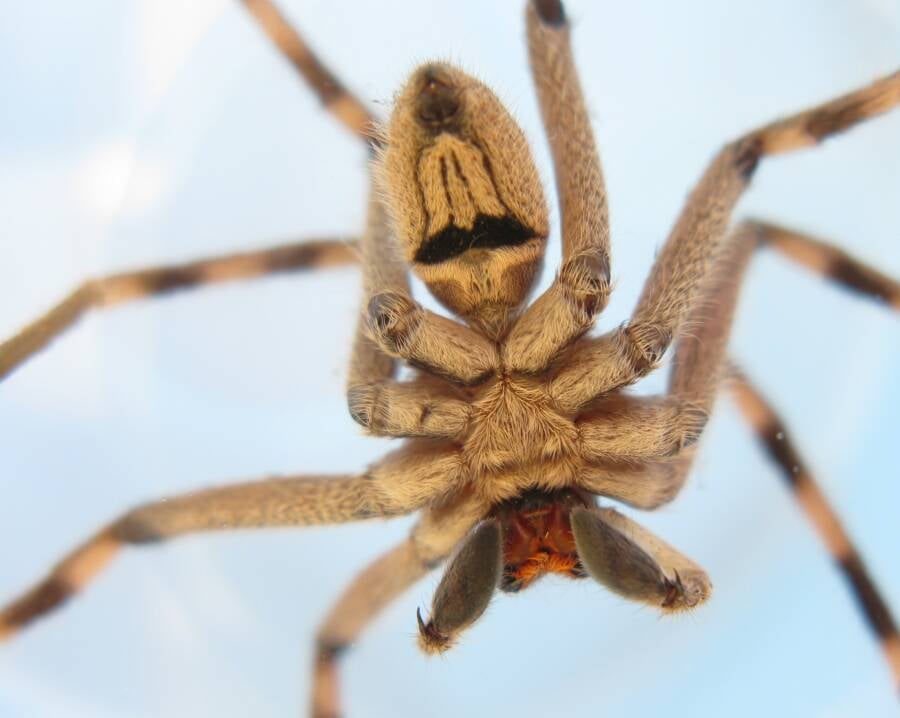 Wikimedia CommonsThe huntsman spider from below.

The huntsman spider is an efficient and calculating predator, and the giant variety is longest spider species on Earth, by leg span. This arachnid can be as small as an inch and grow to nearly a foot wide in some species. It doesn’t even need webs to kill prey. Instead, it runs frighteningly fast across the ground — immobilizing its victims with highly toxic venom.

Further, there are more than 1,200 species of huntsman spider scattered around the world. Australia has naturally taken the lead here, harboring 155 of those species. Nearly 100 of those are endemic to the critter-riddled nation.

Some believe the Sparassidae family originated from a single common ancestor in Southeast Asia. What’s clear is that the huntsman prefers warm and temperate climates. Enormous and proficient at killing, one species lays egg sacs as big as golf balls. Others camouflage perfectly into the wild — or your bedroom.

The Huntsman Spider: Habits And Habitat

Brown and flat, adult huntsman spiders have an inch-long body and five-inch-long legs. Both sexes have black splotches on their legs, with males another dark stripe on their bellies. They retreat into crevices and bark, and use both vision and vibrations to find their prey.

Huntsman spiders are often called giant crab spiders for their giant appearance and wide stance, reaching 12 inches long. Some of the larger species prefer forested areas and are thus called wood spiders, while southern Africa’s Palystes genus is called the lizard-eating spider. Above all, huntsman spiders are fast. 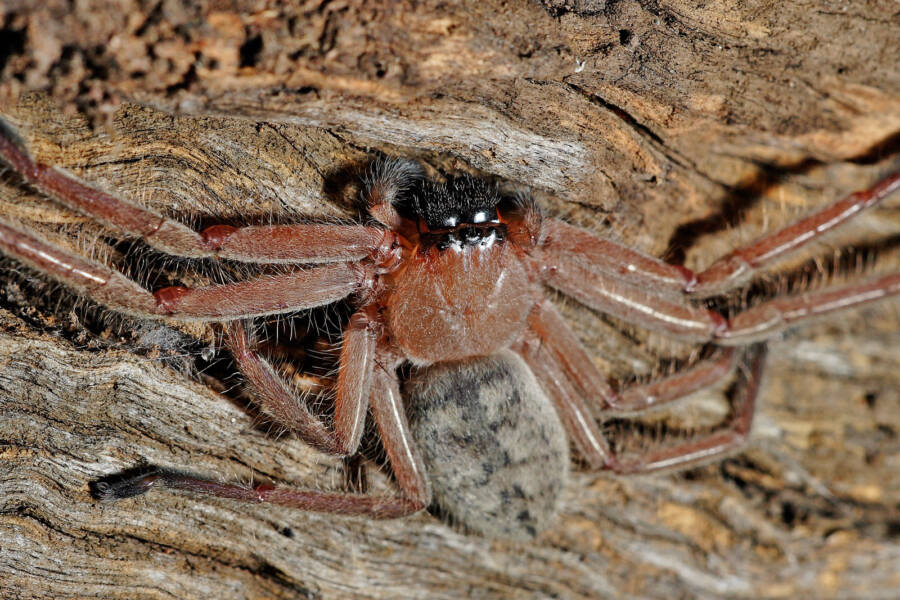 The golden huntsman (Beregama aurea) lags behind at a still impressive speed of 31 body lengths per second. Procreation, however, is what truly sets them apart. With a negligible weight of 5.5 grams, this huntsman spider lays egg sacs as big as your morning breakfast eggs.

Most huntsman spiders become sexually mature after about a year, save for the golden variety, which reaches that point after 1.5 years. It’s rather visible, as well, with the female huntsman’s genital opening (epigynum) on the abdomen becoming tanned — while the male’s palp appendages grow larger. 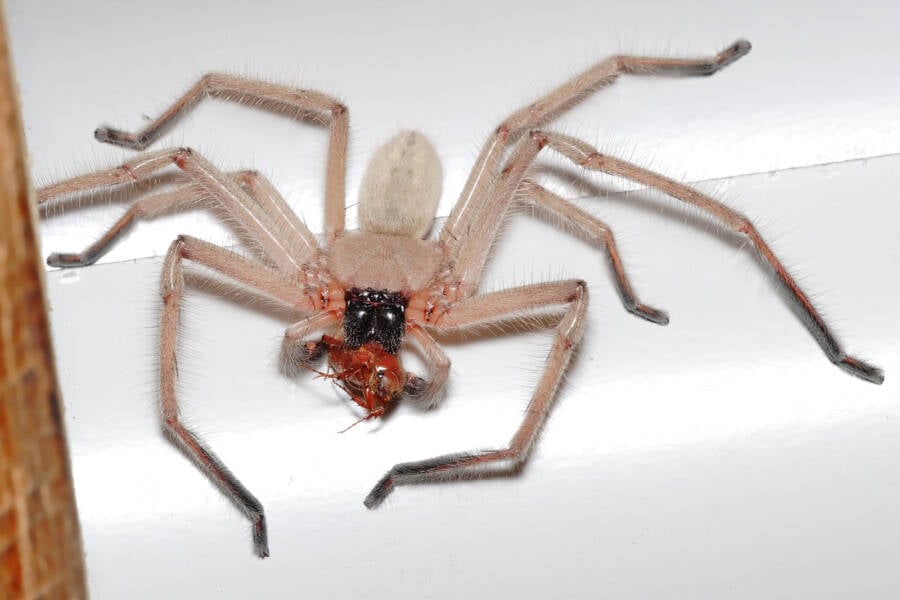 Sex is initiated by the male. They seek out females by the pheromones they’ve left behind and then use their stomachs to make vibrations to signal the female back. Males commonly take up with females that have yet to reach maturity, guarding them closely until they do — and then inserting their palpi into the epigynum.

In a process that lasts between one to eight hours, the male alternates between palpi to reproduce. Both partners coexist peacefully afterward, for weeks or even months. While most spiders die within a year, huntsman spiders generally triple that lifespan, though males usually die before females lay their egg sacs.

Those of a Heteropoda venatoria are about an inch wide and hold more than 200 eggs. More fascinating than huntsman spiders mating, of course, is how they kill their prey.

These critters are nocturnal, crawling out of their tropical or forested hideouts to kill when the sun has set. From insects to invertebrates, they clamp down with their jaws (chelicerae) — and inject their venom into victims. While huntsman spiders, fortunately, prefer insects to humans, their bites have traumatized plenty. 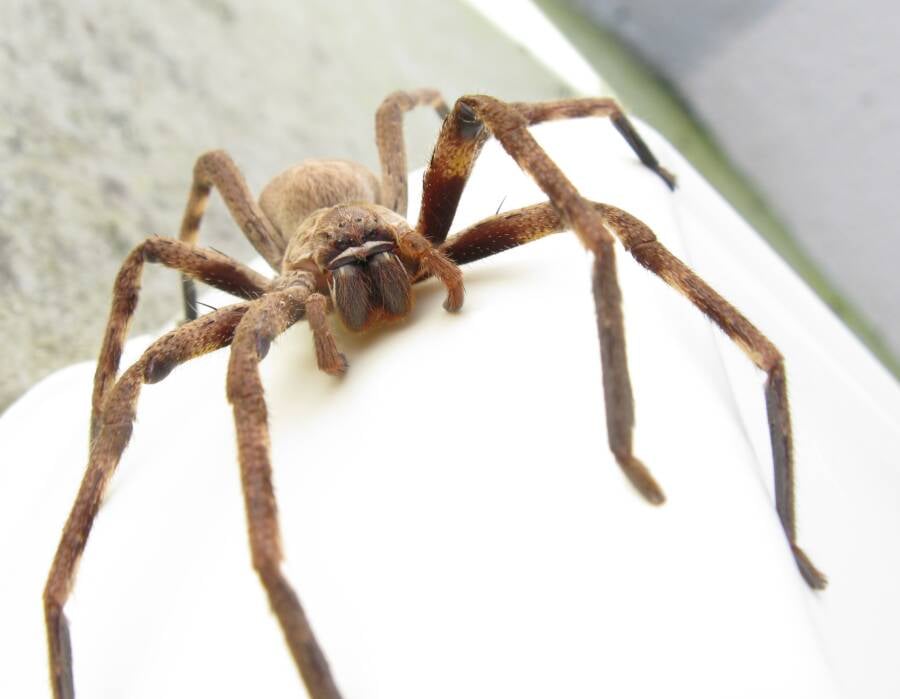 The huntsman spider bite results in potentially hours-long pain, with the venom causing the human body serious inflammation that ramps up the heart rate. That’s not all, however, as being bitten by these large night stalkers has been known to make people vomit while battling a serious headache.

It’s unknown whether these animals are actively aware that what they’re biting won’t be able to be eaten. Nonetheless, female huntsman spiders have been known to defend their families — which can grow into hundreds of offspring — by any means necessary.

Should you find yourself encountering a huntsman spider family, be advised that any perceived threat against the young or the mother’s egg sacs could lead to trouble. Alternatively, one could follow in the baffling footsteps of Jake Gray — the Australian who willingly lived with a giant huntsman spider for a year. 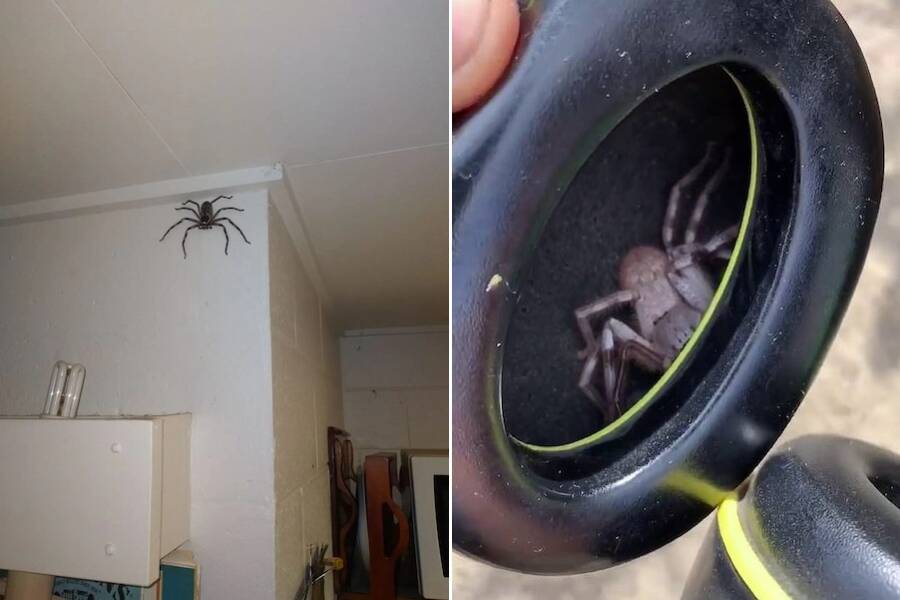 FacebookA giant huntsman spider in the Queensland home of Jake Gray (left) and a huntsman in Olly Hurst’s headphones.

As he announced on Facebook at the tail end of 2020, Gray had been watching “the mighty huntsman” grow throughout the pandemic. The Queensland man had discovered it in 2019, regularly updating his social media followers with the “big girl’s” progress as it grew to the size of a dinner plate.

Perhaps more terrifying than finding one in your home is realizing that the tickle in your ear is no phantom sensation. That’s what happened to Olly Hurst in October 2020. He said he “could feel something tickling my ear,” only to take off his headphones — and find a giant huntsman spider trapped in the device.

The lesson, perhaps, is to stay far away from warm and temperate climates — especially Australia.

After learning about the Huntsman spider, read about tarantula venom as a potential cure for epilepsy. Then, learn about the preposterously venomous blue-ringed octopus.