After 23 years on the payroll of Christchurch, New Zealand, the city council has fired Ian Brackenbury Channell — ending the unprecedented reign of the world's only state-appointed wizard. 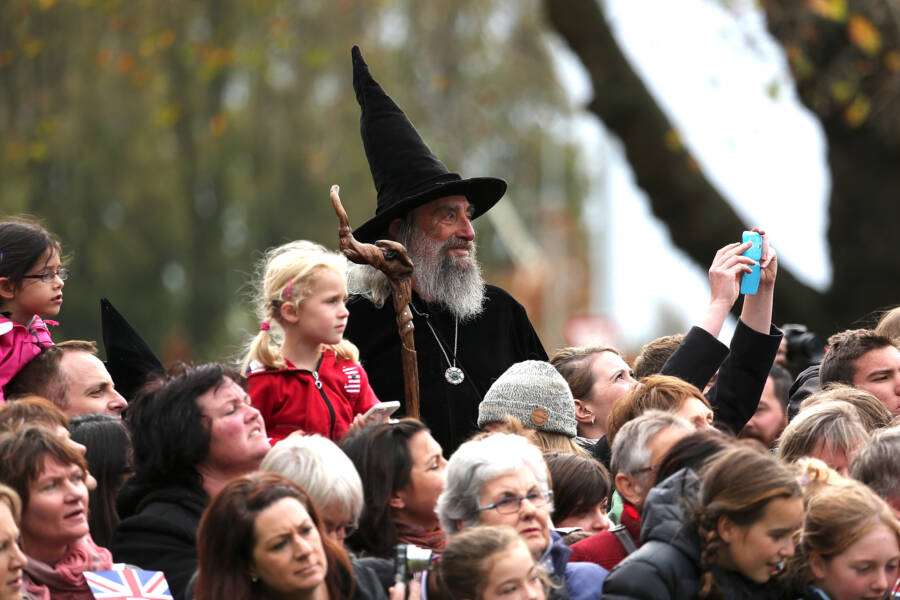 Martin Hunter/Getty ImagesIan Brackenbury Channell awaits the arrival of Prince William and the Duchess of Cambridge during their April 2014 visit to Christchurch, New Zealand.

Since 1998, the city of Christchurch, New Zealand has employed Ian Brackenbury Channell as their official wizard. Now 88 years old, the wizard was tasked with performing “acts of wizardry and other wizard-like services,” for a tax-free salary of $16,000 a year.

The prime minister himself offered Channell this job, and since then he’s even been awarded the Queen’s Service Medal in 2009, but his reign of wizardly employment has now come to an end. This is partially because the people of New Zealand are no longer as amused by his acts of wizardry as they once were, and also because of a series of controversial comments Channell made about women on a local news show.

In April, he appeared on local comedy current affairs show New Zealand Today, in which he joked that women “use cunning to get men who are thick,” and advised to “never strike a woman because they bruise too easily…and they’ll tell the neighbors.” 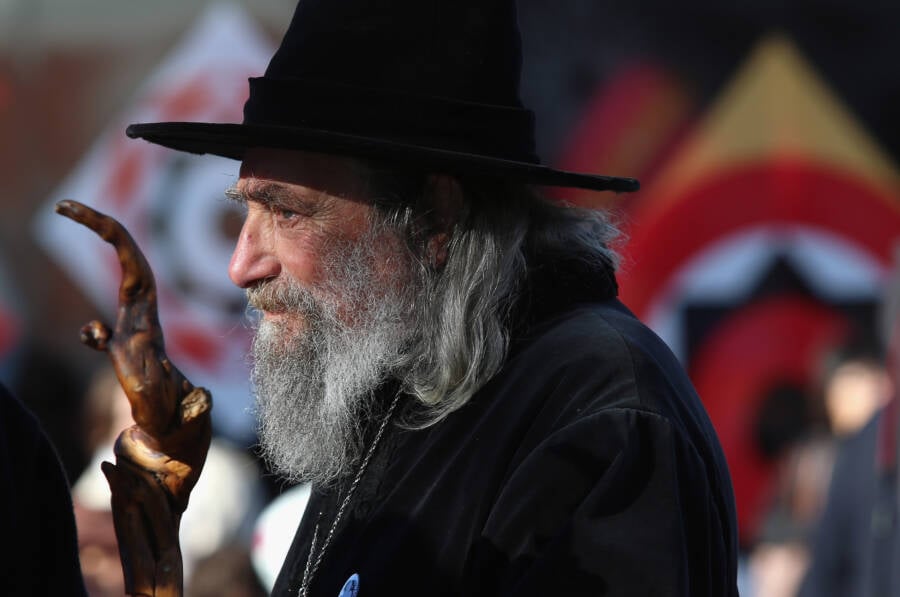 Looking back on the now finished career of New Zealand’s official wizard, it’s clear that he was once quite beloved.

According to the BBC, Channell began freely performing in the Christchurch city square in 1976. Poised high atop a ladder, the cloaked figure would address locals and speak of magical spells and curses. While police initially tried to arrest him, public protests saw the square designated as a public speaking area, instead.

Channell was once such a fixture of Christchurch that the New Zealand Art Gallery Directors Association declared him a living work of art in 1982. This was followed by a letter from prime minister Mike Moore, who asked him in 1990 to “urgently consider” becoming the official wizard of New Zealand.

“No doubt there will be implications in the area of spells, blessings, curses, and other supernatural matters that are beyond the competence of mere Prime Ministers,” wrote Moore.

While Channell initially provided his services for free, he agreed to a salary in 1998. For nearly a quarter of a century, he attended cultural gatherings and demonstrations, and even appointed an apprentice. 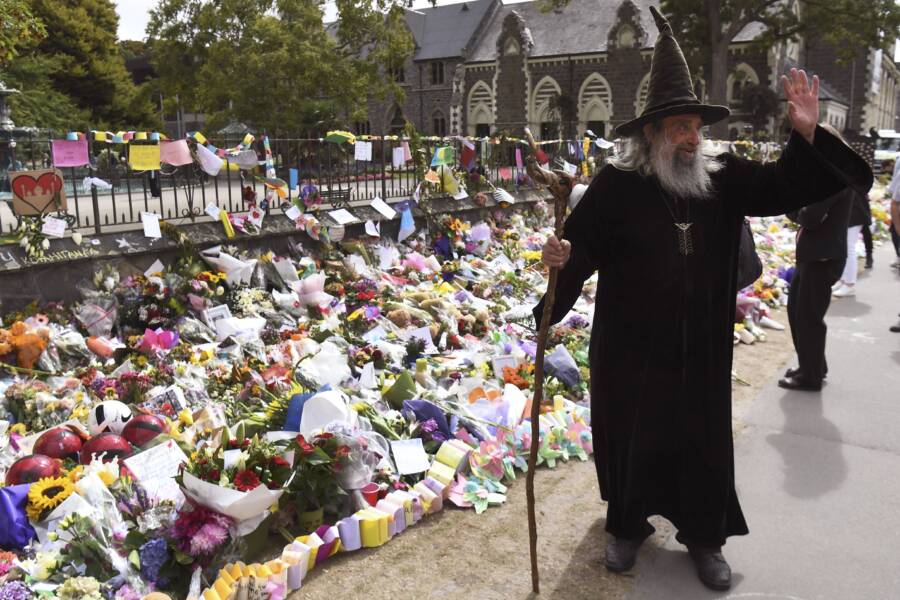 However, with a new tourism campaign hoping to showcase a vibrant, diverse, modern city that is attractive to residents, domestic and international visitors, new businesses, and skilled migrant workers, Channell’s magical services have become glaringly anachronistic. And his misogynistic comments only sealed his fate.

Naturally, the once jovial wizard is rather displeased.

Channell learned of his termination through a letter from the Christchurch city council. Spokesperson Lynn McClelland said he would “forever be a part of [Christchurch’s] history” and thanked him for his service, but that his contract had come to an end.

Channell quickly fired back with his response: “It implies that I am boring and old, but there is nobody else anything like me in Christchurch. It’s just they don’t like me because they are boring old bureaucrats and everyone likes me and no one likes them.”

Ironically enough, Channell himself was ready to retire following the 2011 Christchurch earthquake. Convinced the city no longer needed him, he believed the time had come. When it was announced that the remains of the destroyed Christchurch Cathedral would be demolished, however, he put his pointy hat back on. 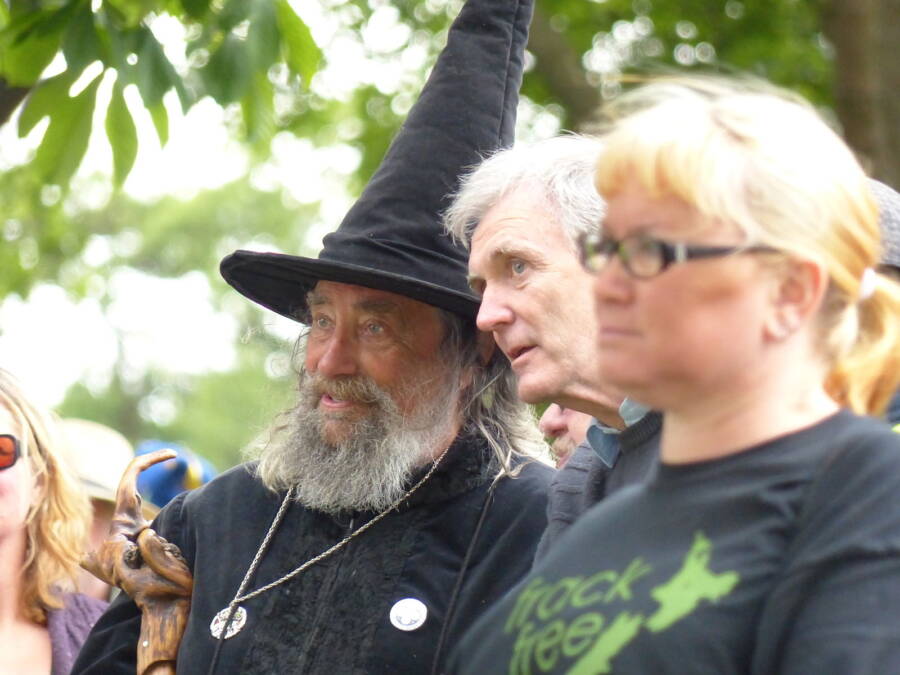 Wikimedia CommonsLocals congregate with their wizard.

Ultimately, Channell isn’t ready to put his cloak in storage. He’s aware that his work isn’t as essential as he believes it once was, but the announcement of his contract ending gave him a renewed jolt of energy. In his mind, he gives “children happy dreams, general good health, and I want to make bureaucrats more human.”

“When they canceled this honorarium, everyone got furious, they have awakened a hornet’s nest here, it’s hilarious,” he said. “The new few months are going to be real fun.”

“I will still keep going. They will have to kill me to stop me.”

After reading about the official Wizard of New Zealand having his contract ended, learn about World War II’s magician soldier, Jasper Maskelyne. Then, read about the exploding pants epidemic of 1930s New Zealand.