Ibn Battuta traveled the territory of what is now 44 countries, married at least seven times, and wrote the most comprehensive account of 14th-century life around the globe to date.

In 1325 when he was 21 years old, Ibn Battuta set out on a journey that should have taken just over a year. It ended up taking 29.

On this journey, Battuta became a Middle-Eastern Marco Polo of sorts. He adventured across 75,000 miles of territory that now forms roughly 44 countries. Throughout his trek he found himself cavorting with pirates and muggers, joining caravans of mysterious and foreign acquaintances, fulfilling the prophecies of holy men, and compiling one of the most comprehensive known pieces of writing from the 14th-century known as Rihla. 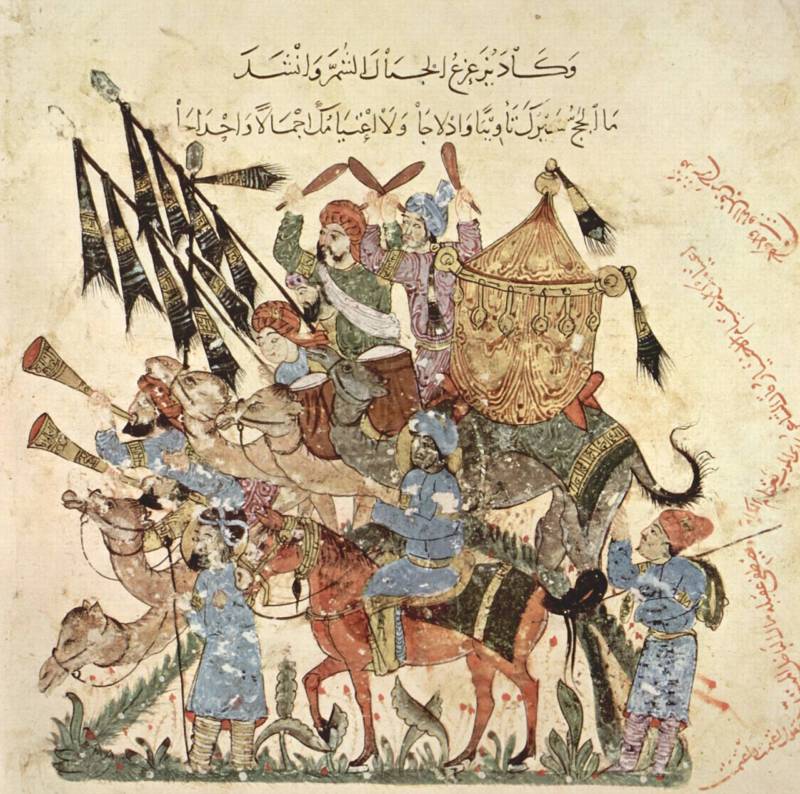 Public DomainA 13th-century book illustration depicting a group of pilgrims on a hajj.

Ibn Battuta was born in February of 1304 into a family of legal scholars in Tangier, Morocco. As was customary in Northern Africa at the time, he likely would have studied at an Islamic jurisprudence center as a young man where he would have been encouraged to go on a hajj, or a pilgrimage to Mecca.

It was this hajj that would eventually lead nearly 30 years exploring, despite being billed as a 16-month trip.

Though he mentioned them little throughout Rihla, it is clear from Battuta’s description of leaving for his hajj that he was close with his family as he openly lamented leaving his parents and homeland behind. He may have also been apprehensive about being alone for most of his trip.

“I set out alone, having neither fellow-traveler in whose companionship I might find cheer, nor caravan whose part I might join, but swayed by an overmastering impulse within me and a desire long-cherished in my bosom to visit these illustrious sanctuaries,” he wrote in the extensive account of his travels.

“So I braced my resolution to quit my dear ones, female and male, and forsook my home as birds forsake their nests. My parents being yet in the bonds of life, it weighed sorely upon me to part from them, and both they and I were afflicted with sorrow at this separation.” 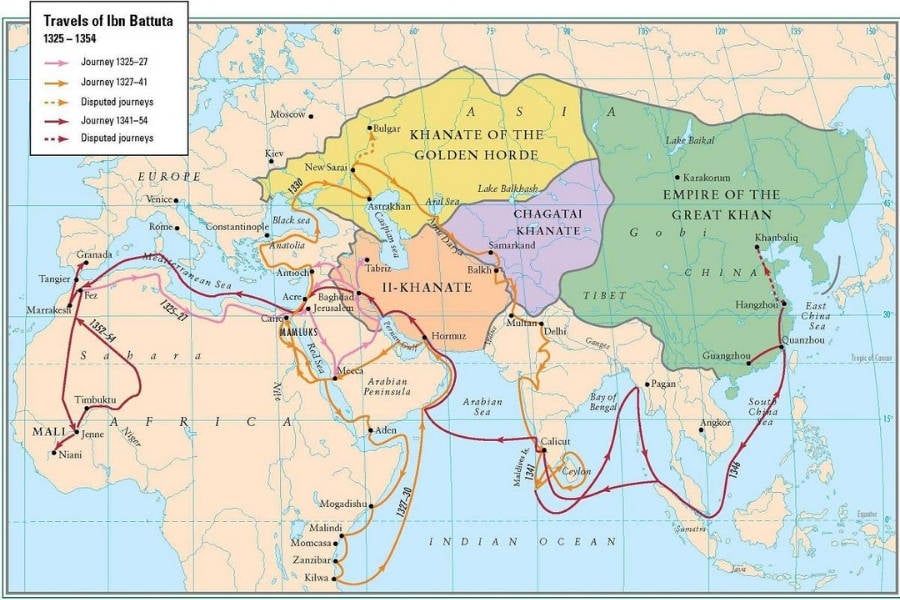 A map of Ibn Battuta’s travels from starting in Morocco to ending in China.

Ibn Battuta’s journey began alone on the back of a donkey. Eventually, however, he was forced to join up with a caravan for safety as a young man riding alone was a target for muggers and bands of thieves. Life with the caravan wasn’t much easier, though, as Battuta was still vulnerable to disease. Indeed, before long he found himself ravaged by a fever so severe that he had to tie himself to his donkey’s saddle to avoid falling and being left behind.

Yet, he continued on and even found time to wed a young woman along the way. She was only the first of 10 women he would marry over the course of his adventures.

The first leg of the journey took Battuta to Egypt along the northern coast of Africa. There he toured Cairo, Alexandria, and other historic places of religious relevance, transcribing his awe. From there he continued to Mecca, his intended destination, where he completed his hajj.

At the completion of the pilgrimage, most travelers would return home. But Battuta felt called on a deeper level to continue traveling and learning and instead, he departed for the Middle East and specifically for Persia and Iraq.

It seemed that the calling to continue traveling was a spiritual one. On his journey with a caravan to Persia, Battuta repeatedly dreamt of riding a giant bird which took him to the east and dropped him off though it never returned for him. A holy man he encountered interpreted the dream for him and insisted that it meant he was to become a world traveler.

Little did Ibn Battuta know, the prophecy would be fulfilled time and time again. 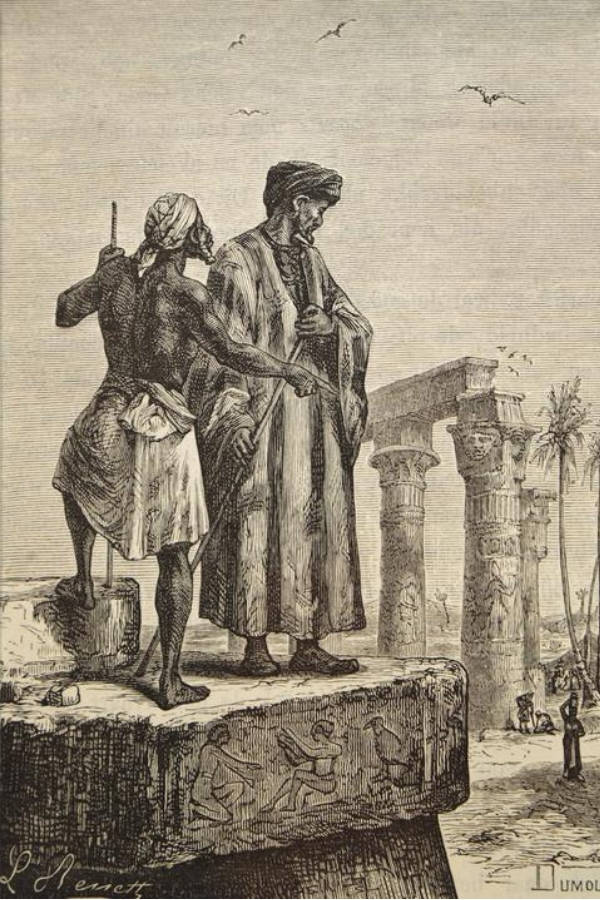 Wikimedia CommonsA sketch of Ibn Battuta on his travels.

From Persia and Iraq Battuta traveled to present-day Azerbaijan and Yemen, then off to Africa to visit the Horn, the Somali coast and Mogadishu, Tanzania, and Kenya. Following his trip to Africa, he moved on to India by way of a ship bound for Turkey. He traveled from Turkey to Afghanistan and entered India through the Hindu Kush mountains and through a pass at a higher elevation than he’d ever reached before.

In India, as he had done many times before, Battuta relied on his experience as a religious scholar to earn him his keep. He found work with an Islamic sultan as a judge and even settled down briefly to marry (again) and have children. However, his immobile lifestyle ended after just a few years in 1341 when the Sultan sent him on a caravan to the east and into the Orient.

But the trip didn’t go as planned.

Hindu pirates attacked Battuta’s ships as they traveled down the Indian coast. Battuta was kidnapped and robbed. Even after escaping, he found himself caught in a storm which sunk several of his ships and killed many of his men, according to his accounts in Rihla. 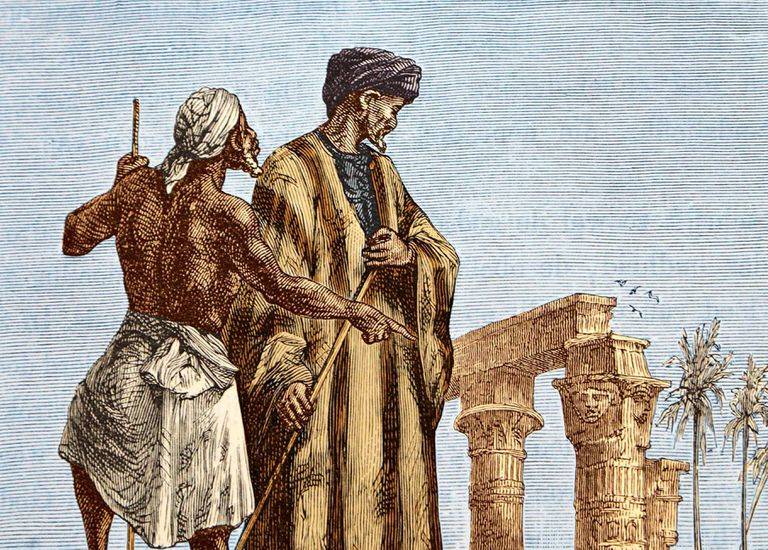 Getty ImagesA painting of Ibn Battuta, author of the exhaustive travel series, Rihla, done well after his death. No photos or realistic sketches of the adventurer are known to exist.

Deciding against journeying directly to the Orient, Battuta spent time in the Maldives where he again settled for a period of time, marrying and having children, and serving as a judge.

However, a year or so in, he decided to resume his ill-fated journey to the Orient and see what the Asian lands had to offer.

By way of Sri Lanka, where he discovered some of the purest pearls he’d ever seen, Battuta arrived in the shipping port of Quanzhou, China. He marveled at the size of Chinese cities and proclaimed them bigger and more beautiful than anything he’d ever seen. He also praised their attitude toward travelers.

The End Of A Journey, The Beginning Of A Legacy 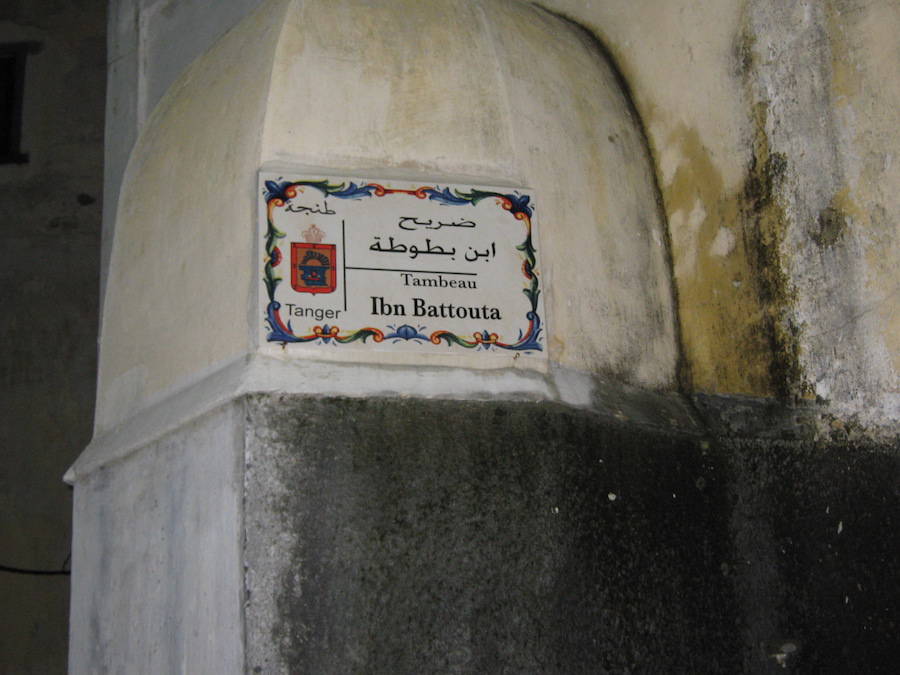 Wikimedia Commons
The possible site of Ibn Battuta’s grave located in a house in the the Medina of Tangier.

This trip to the Orient would prove to be Ibn Battuta’s last.

As he had reached the end of the known world at that time, he had nowhere else to go but home. And so, almost three decades after leaving Morocco for a hajj to Mecca, he returned.

Though he was no longer physically traveling, Ibn Battuta made sure his journeys continued. Upon returning home in 1354, he enlisted the help of a writer named Ibn Juzayy to compile his memoirs.

For several years he dictated every detail of his incredible adventures to Juzayy. He told him of the pirates he had encountered, the monsoons he had both avoided and become caught in, the wives and children he had come to love, and the beautiful things he had seen.

The result was an oral history known as A Gift to Those Who Contemplate the Wonders of Cities and the Marvels of Traveling, known more commonly as Rihla, which is Arabic for “voyage.”

Mysteriously after publishing Rihla, Ibn Battuta disappeared. Rumors swirled that he had again settled and become a judge and died around 1368, however, history stands to prove that couldn’t have lasted long for the traveler. Perhaps he stayed still, but it’s more likely that he moved on, intending to find new and unexplored places. Perhaps he simply found something so stunning he never returned.

Next, read about the life of Karen Blixen, who inspired “Out of Africa.” Then, check out these photos of African kingdoms before colonists stormed in.