Because the bridges are so effective, the United States and Canada have upped the construction of these crossings in the last 30 years. 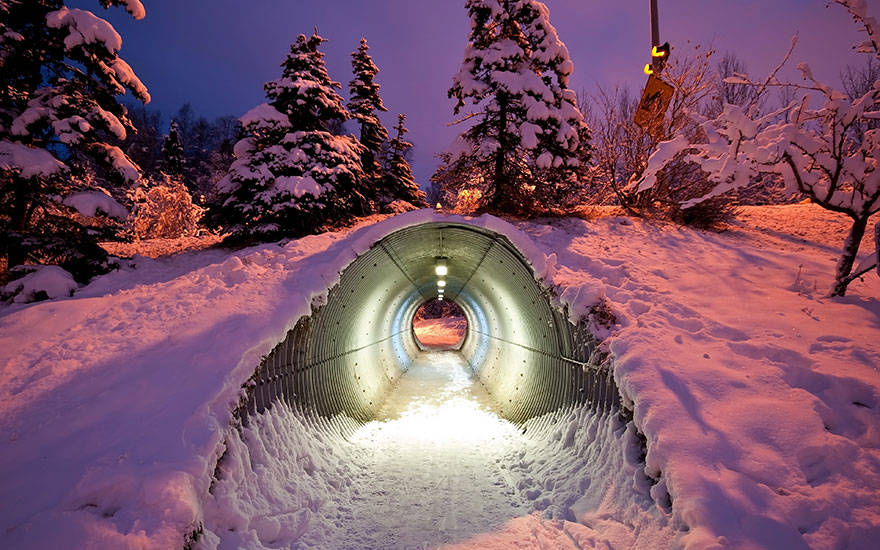 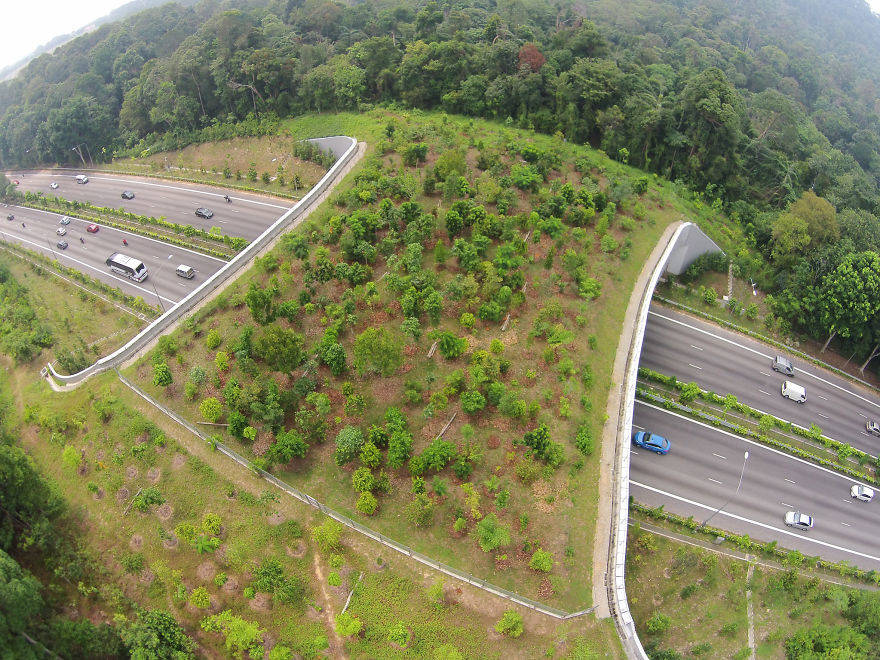 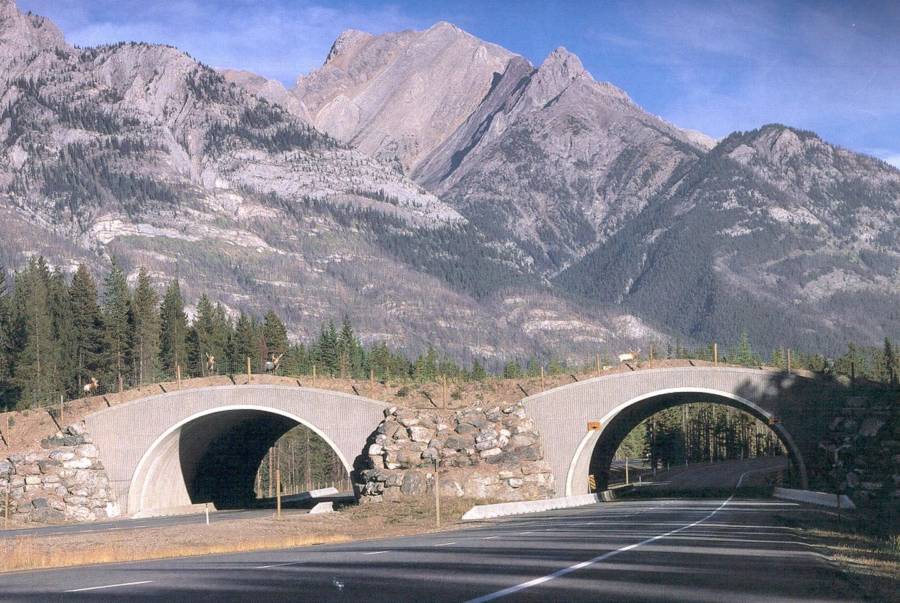 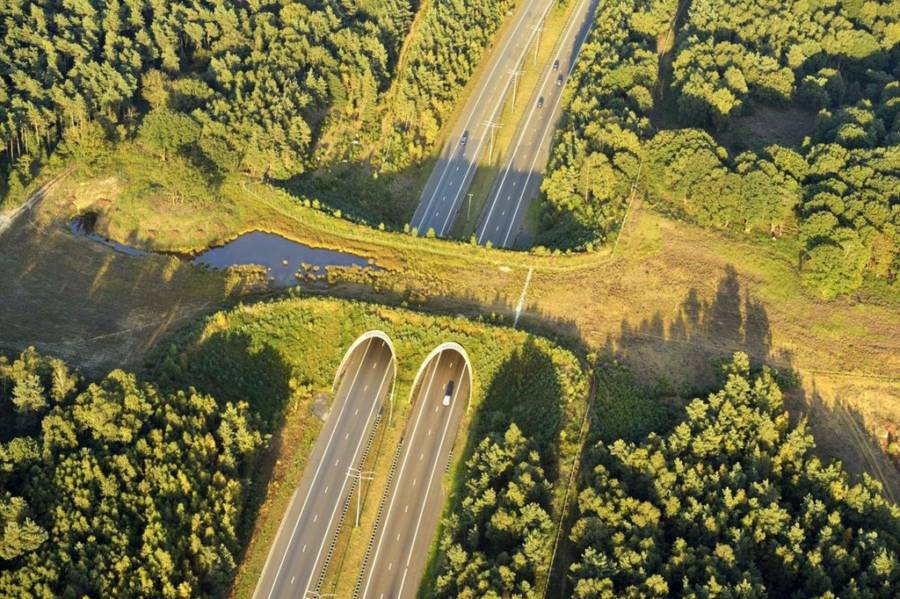 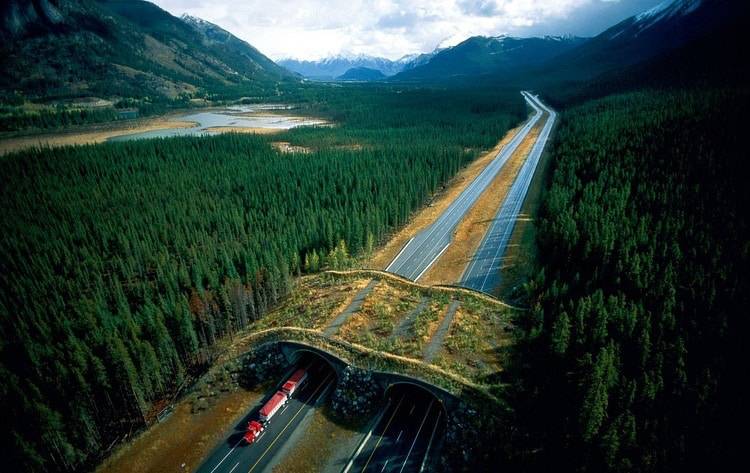 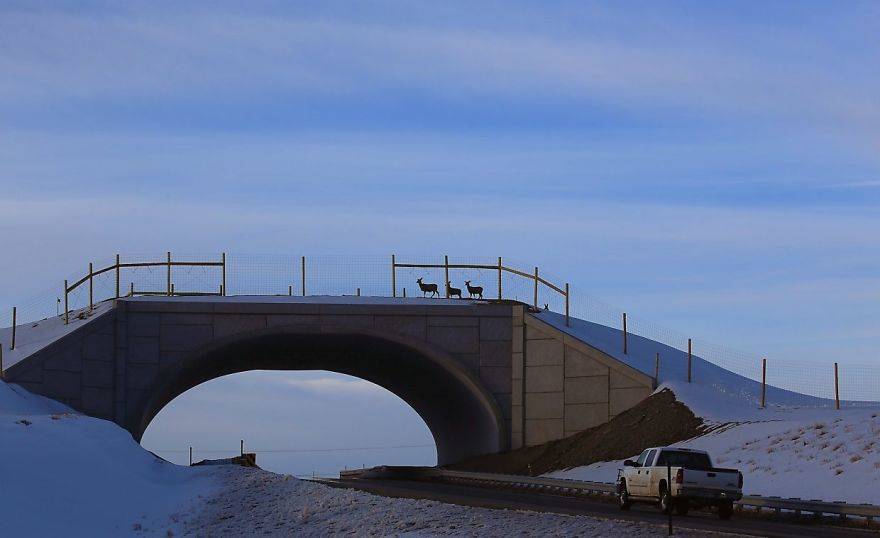 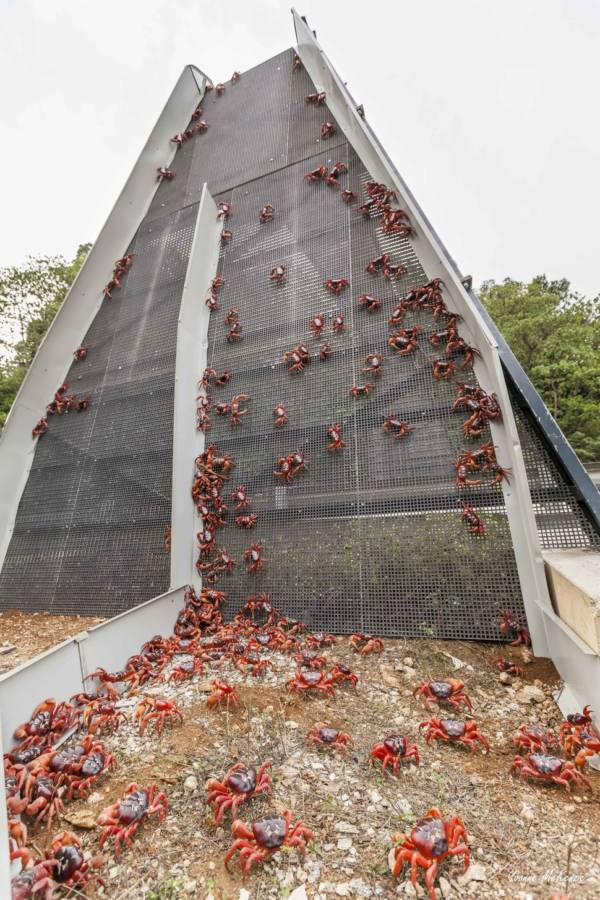 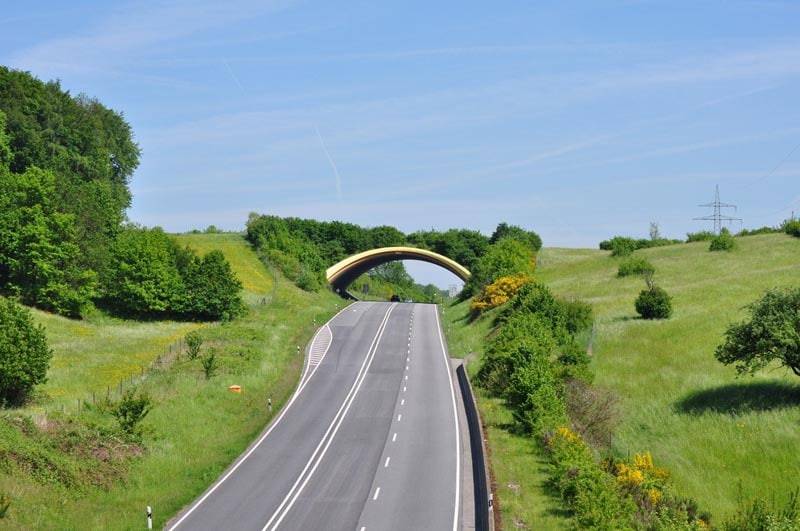 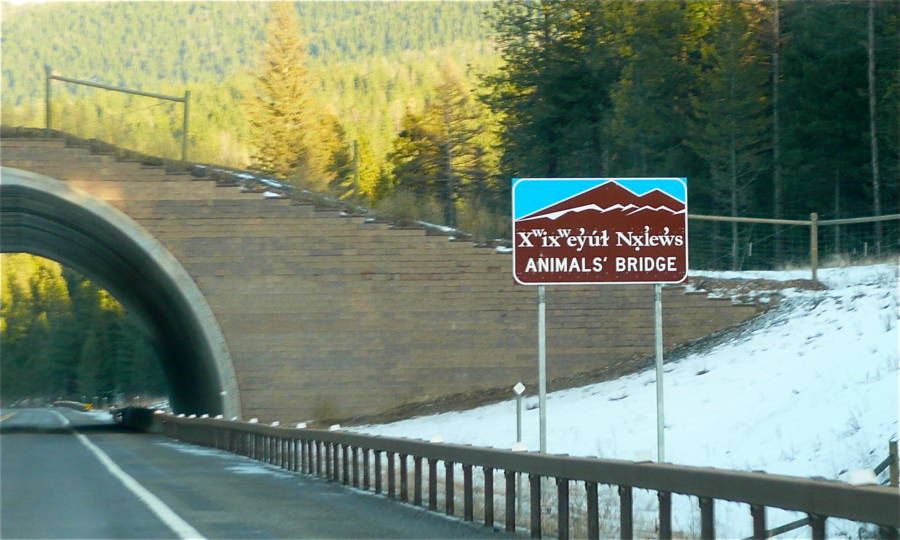 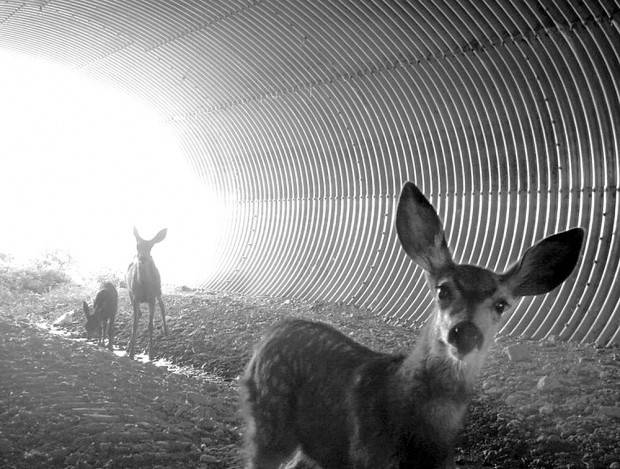 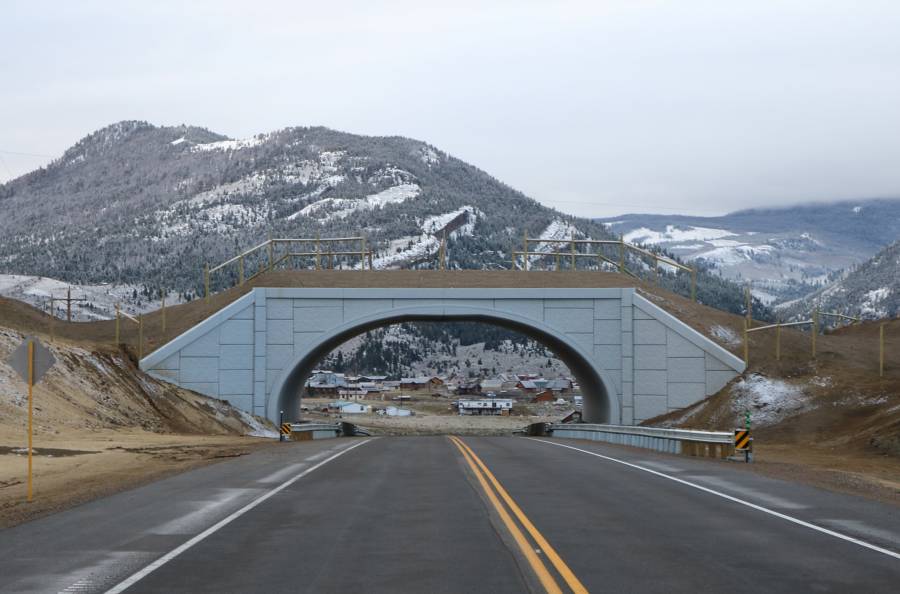 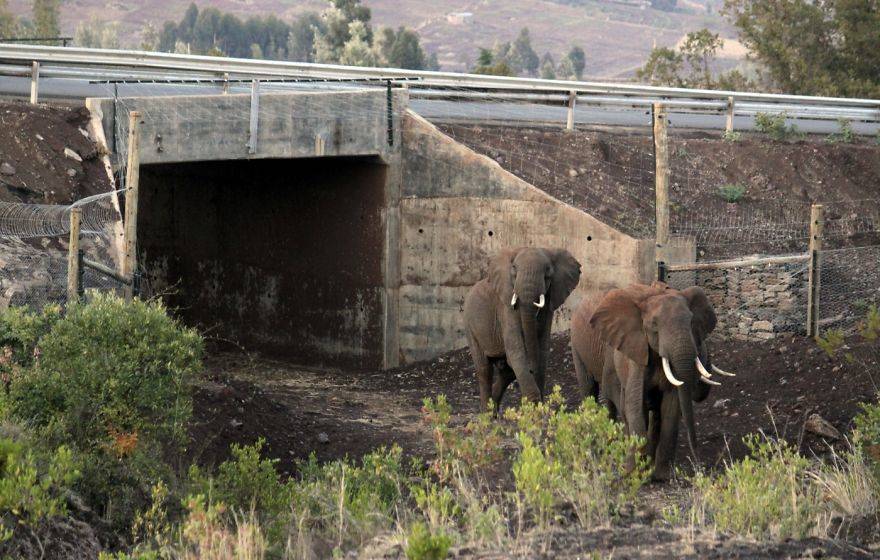 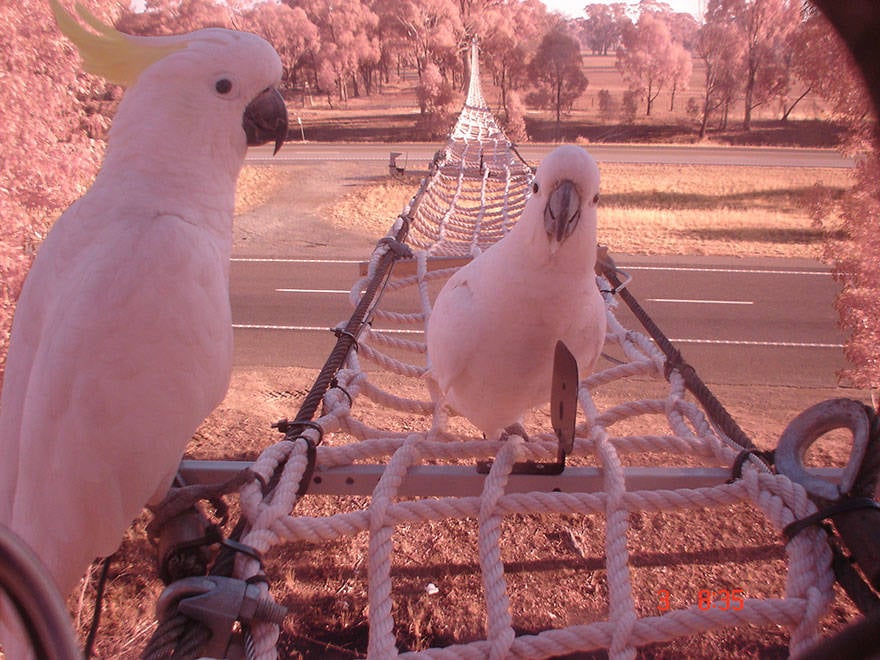 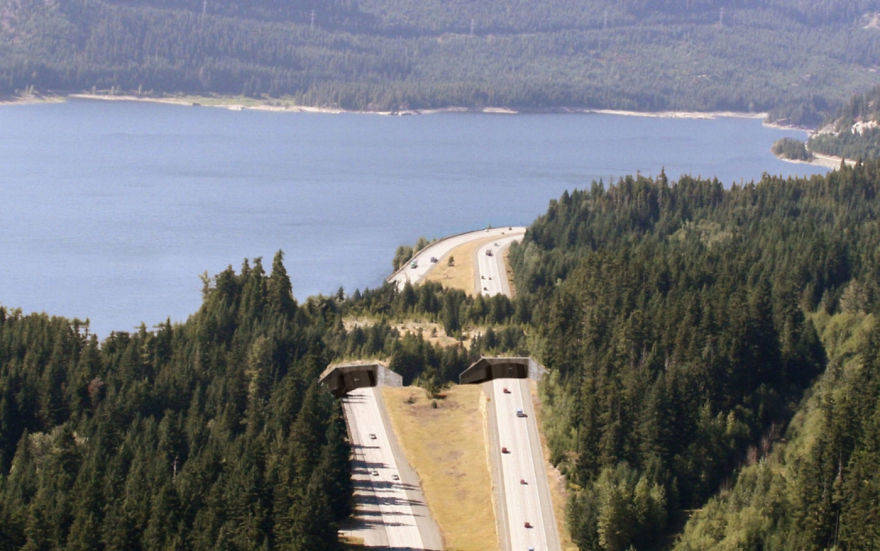 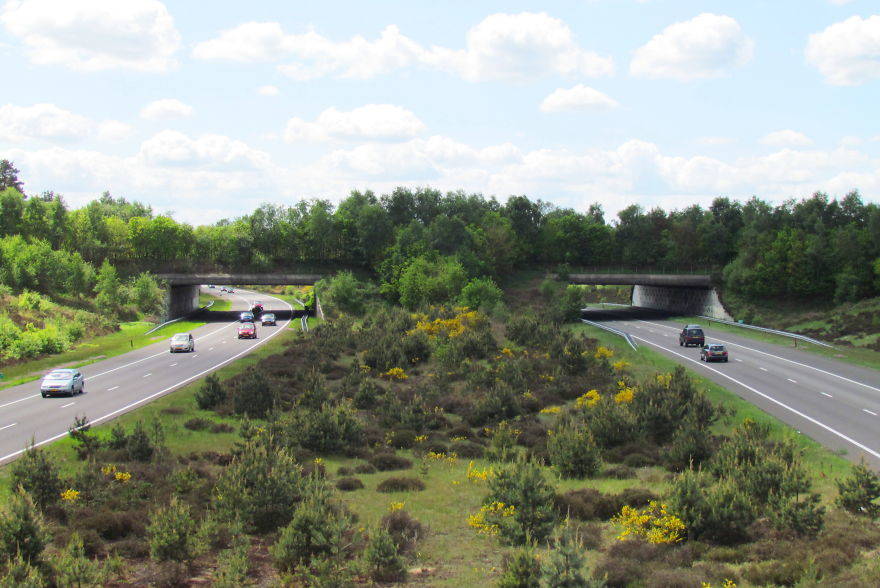 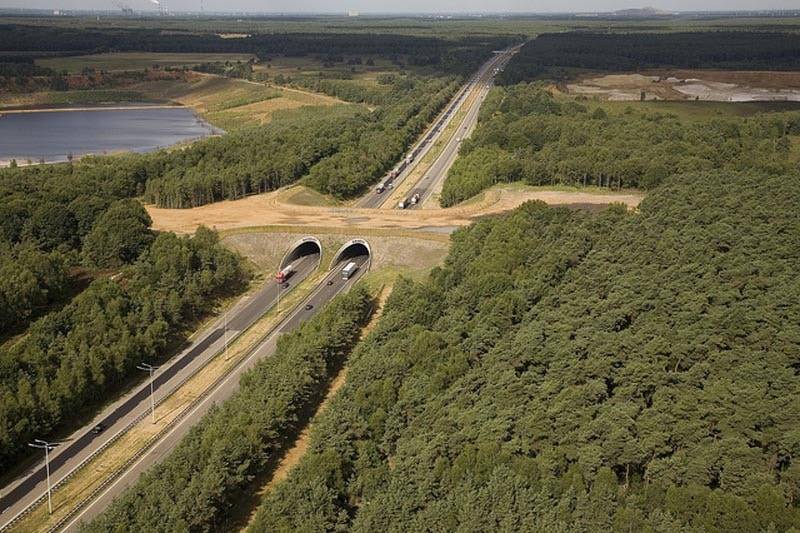 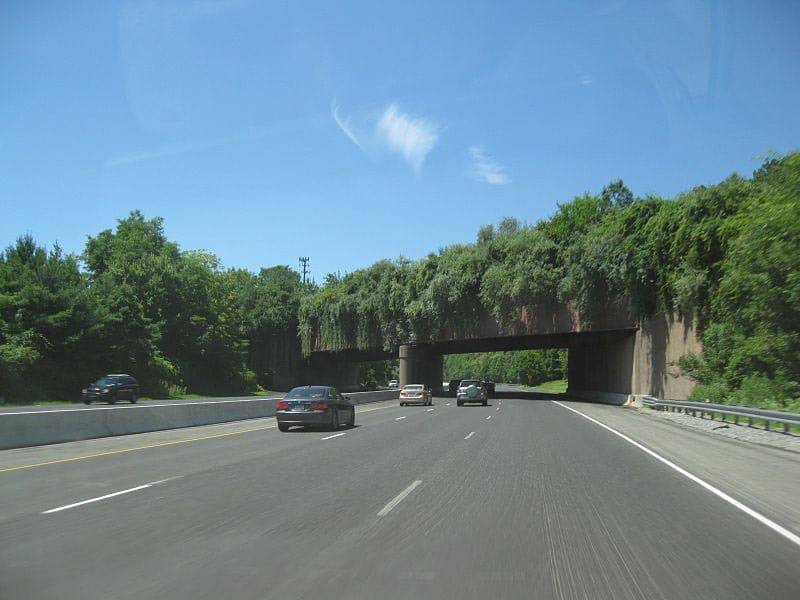 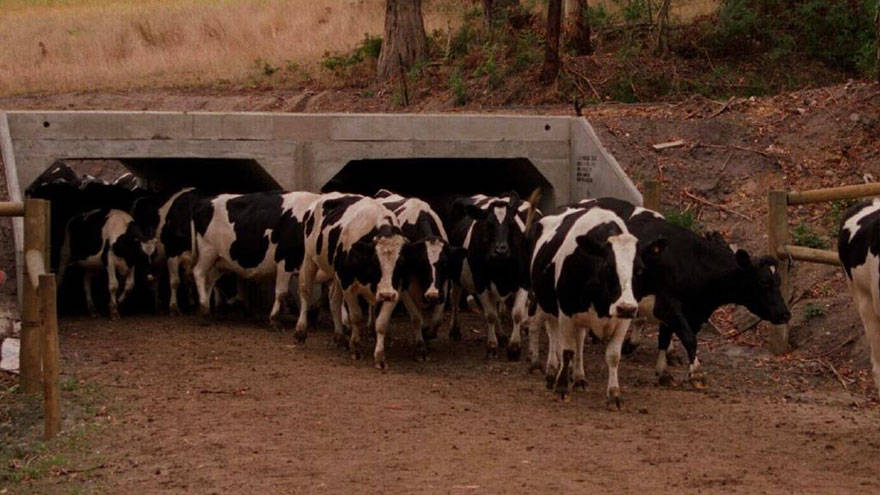 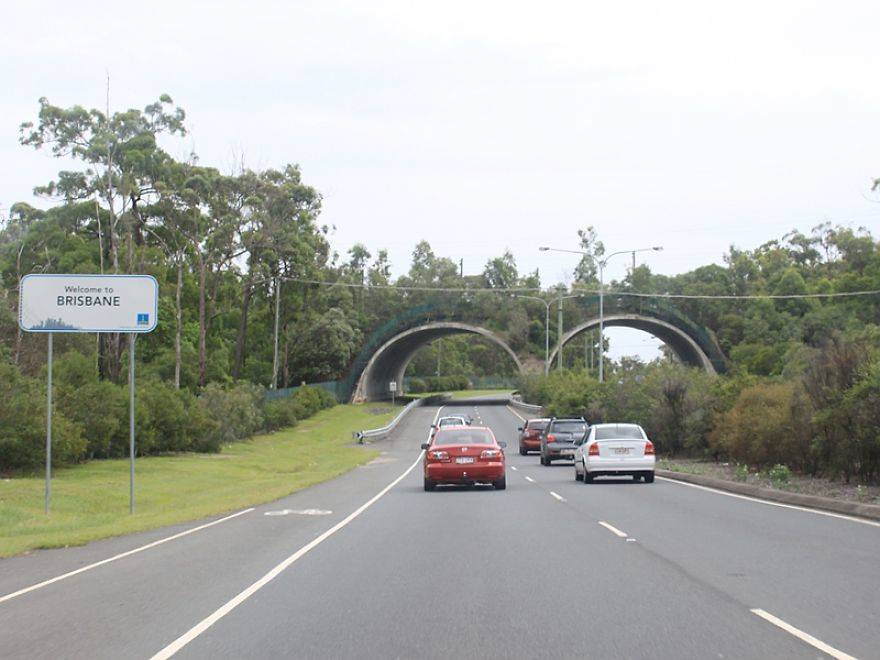 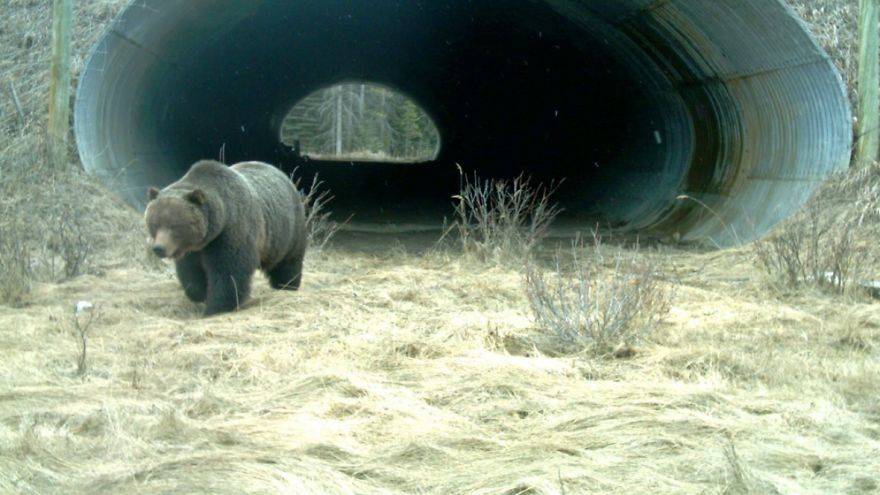 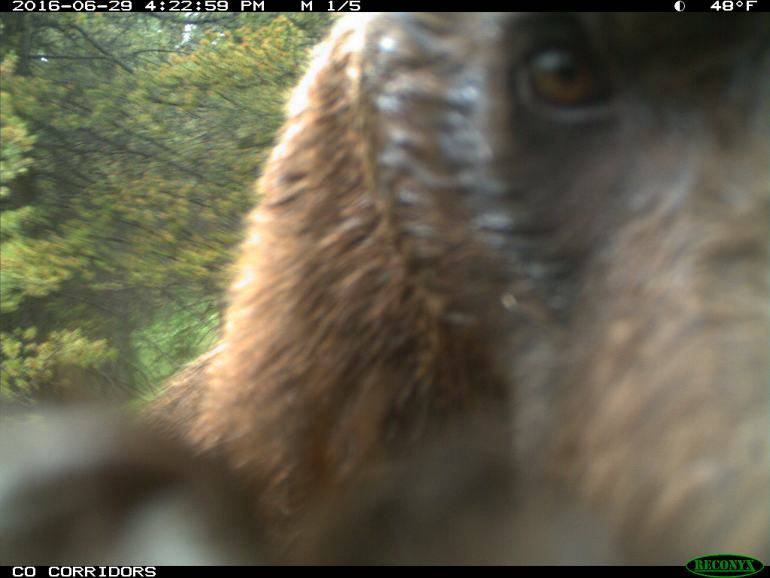 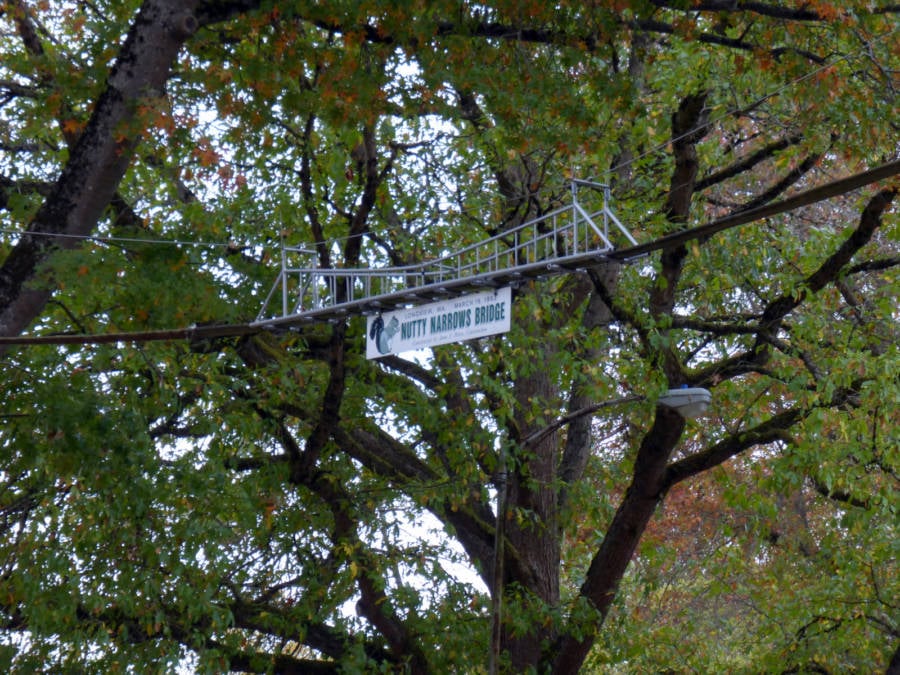 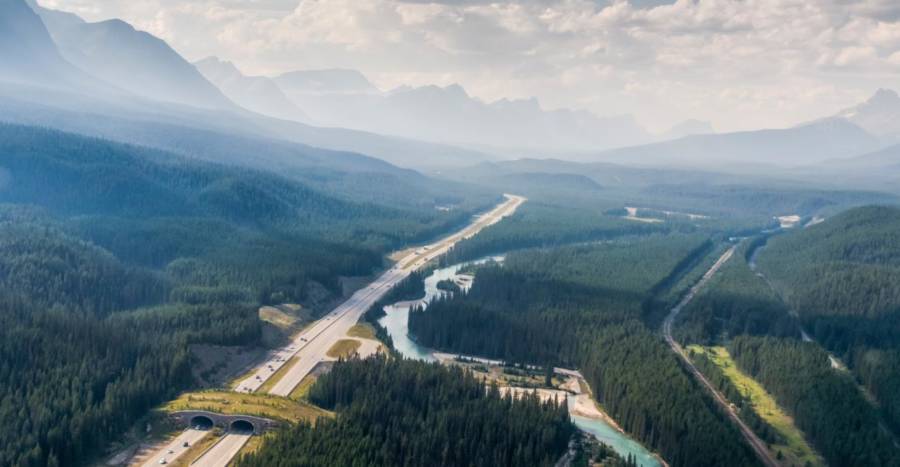 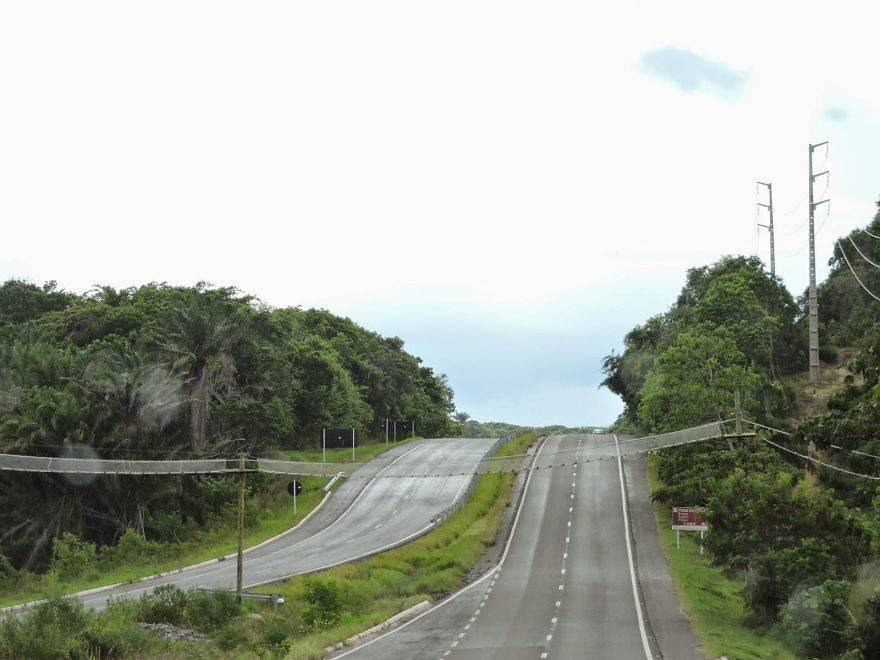 1 of 26
This wildlife crossing can be found under a highway in Finland.Bored Panda
2 of 26
This tree-covered pass is in Singapore.CheekyAsian/Bored Panda
3 of 26
Banff National Park, Alberta, Canada. reddit
4 of 26
Wildlife overpass in the Netherlands. reddit
5 of 26
Wildlife crossing in Alberta, Canada.Joel Sartore/MyModernMet
6 of 26
Deer use a Colorado ecoduct.notlorinashton/Bored Panda
7 of 26
The only bridge on Christmas Island, Australia, is to facilitate crab migration from the rain forest to the ocean. Wondrous World Images/ABC.net
8 of 26
A wildlife crossing in Germany.reddit
9 of 26
The Flathead Reservation Overpass near Evaro, Montana.Wikimedia Commons
10 of 26
Seen in the underpass through the Flathead Indian Reservation.CSKT, MDT, WTI-MSU/ Missoulian
11 of 26
The Colorado Highway 9 Overpass.Wikimedia Commons
12 of 26
An elephant underpass in Kenya.AP/Bored Panda
13 of 26
Cockatoos occupy a rope bridge meant for squirrels in Victoria, Australia.Bored Panda
14 of 26
As seen in Keechelus Lake, Washington. Bored Panda
15 of 26
An ecoduct in the Netherlands. zenhamster/Bored Panda
16 of 26
A wildlife crossing in Belgium.reddit
17 of 26
A turtle tunnel under train tracks in Japan.sumasui/Bored Panda
18 of 26
An animal bridge in New Jersey. Wikimedia Commons
19 of 26
Cattle travel through an underpass in Victoria, Australia. Bored Panda
20 of 26
Wildlife bridge in Brisbane, Australia. Rob Tilley/Bored Panda
21 of 26
A grizzly bear emerges from an underpass after crossing the Trans-Canada Highway in Banff National Park, Canada. HighwayWilding/Bored Panda
22 of 26
A Black Bear takes a selfie on a Colorado corridor camera on I-70. KDVR/Denver
23 of 26
Nutty Narrows Bridge in Longview, Washington.springfieldhomer/Flickr
24 of 26
An overpass reconnecting the forest in Banff National Park, Canada.Allie Banting/Parks Canada
25 of 26
A rope bridge over a roadway in Brazil. _gosh/Bored Panda
26 of 26 When nature meets asphalt, it's rarely a good thing. That's why conservationists and architects got together to engineer animal bridges over busy highways for our wild animal friends. These wildlife crossings reduce fatalities for both animals and humans alike.

Indeed, there is a lot more at stake than just roadkill.

Thanks to our ever-expanding roads, wildlife habitats are becoming increasingly fragmented. Highways often cut animals off from resources they rely on for survival. This leaves wildlife with little choice other than to attempt to traverse dangerous roads. It's a no-win situation.

Who Is Building Animal Bridges?

The idea of wildlife bridges aren't really new; in fact, they've been springing up throughout Europe since the 1950s.

However, the United States and Canada have picked up the pace on construction considerably over the past 30 years. This may be prompted, in part, by the fact that Americans shell out nearly $8 billion annually for vehicle-animal collisions. But certainly, wildlife health and conservation plays a large part.

The Netherlands alone has 66 overpasses to protect its wildlife populations; namely badgers, boars, and deer.

How These Futuristic Wildlife Crossings Work

The idea behind animal bridges is to give native animals a way to get across roads without endangering themselves. Optimally, engineers design the bridges to be inexpensive (so there can be many) and natural-looking so as to not frighten the animals.

Fencing is installed leading up to the crossings in order to direct wildlife to the area. Any details that encourage the animals to use the crossings also increases the likelihood that adults will teach their offspring to use them, too.

One particularly treacherous area of Colorado — along the highway I-70 — is a prime location for increased wildlife crossings. Local project leaders installed motion-capture cameras to help document the wildlife and their travel patterns.

"We can get an idea of where these animals are naturally existing," said Kara Polansky of the Denver Zoo and the Colorado Corridors Project. "Where they're trying to cross ... how they're behaviors might be affected by the highway. Then use that information to determine where the best place for the crossing structures might be."

"In some places, we've seen up to a 90 percent reduction in vehicle-animal collisions where these have been built, so they tend to be really successful," Polansky continued.

Both Over And Under

In addition to overpasses or animal bridges, many places have wildlife crossings that go beneath roadways. They tend to be more compact and are used more by smaller animals.

An underpass beneath Highway 160 between Durango and Bayfield in Colorado was completed in 2016. Remote photos show that the passageway is used by deer, coyotes, raccoons, and other small animals daily.

"Roads all over the state run right through these migration paths, when they go back and forth a lot of animals are hit on the highway every year," reported Joe Lewandowski, a spokesperson for Colorado Parks and Wildlife. "There are many many needs in transportation across the state and this is just one of them."

Underpasses in Africa, too, are assisting large animals like elephants in reuniting members of fragmented herds. Building more of these corridors could also ease the human-elephant tensions throughout India.

There are even aquatic corridors linking waterways now separated by roads. The Interstate-90 Snoqualmie Pass East Project is building a corridor to restore the natural flow and function of waterways in Washington and will reconnect fish like trout to the habitat they’ve been cut off from for decades.

Animal bridges are a step in the right direction in creating harmony between modernization and animal life. Habitats will no doubt continue to become more fragmented in the future, but with these bridges in place, road fatalities — both animal and human — should only continue to decrease.

After this look at some animal bridges that blend man and nature, find out about how animals in Chernobyl's Red Forest are surviving — and flourishing. Then, read about the new punishment for wildlife poachers in Kenya.